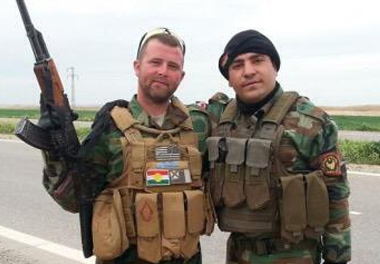 Considering an OJT Counterinsurgency career? Read on. Give us your thoughts in the comments section. Mad Duo

Last month we talked about some Americans fighting overseas with the Peshmerga. The information age in general and social media in particular has made it easier than ever to go abroad to fight for either side. Just look at ISIS recruiting successes. But there are always risks (I mean, aside from getting a sucking chest wound if you actually get in a gunfight).

How do you know that you’re actually talking to someone from that organization? What if you show up just to become a captive? Is it a sting from your home nation? Under otherwise normal circumstances, falling for a catfishing ruse may end with an empty bank account or  worse, exchanging nude photos with a fat old dude pretending to be a nubile co-ed. But in this case it could literally mean your head.

To be sure, even initiating contact can be a dicey prospect and further vetting can be impossible (it stands to reason that if you knew the people to vet them locally, you wouldn’t need to find recruiters on Facebook or twitter in the first place). A great deal of blind faith needed to be taken, which goes a ways to explain why ISIS had an easier time with recruiting.

Notice the use of the past tense in the previous sentence.

Understanding this predicament  (and maybe losing some people on the way?) the Peshmerga took the extra step of making an online application, just like if you were applying for a job at Home Depot. They call it the FRAME (Foreigner Registration, Assessment, Management, and Extraction) Program. On that page they provide some basic information, travelling tips, packing lists, and of course the online application. Here is the link for your viewing pleasure.

Regarding the legality of this? Well, as usual it depends on who you ask.

Federal statutes long in force prohibit certain aspects of foreign military service originating within the United States. The current laws are set forth in Section 958-960 of Title 18 of the United States Code. In Wiborg v. U.S., 163 U.S. 632 (1896), the Supreme Court endorsed a lower court ruling that it was not a crime under U.S. law for an individual to go abroad for the purpose of enlisting in a foreign army; however, when someone has been recruited or hired in the United States, a violation may have occurred. The prosecution of persons who have violated 18 U.S.C. 958-960 is the responsibility of the Department of Justice.

..but there’s that part about being recruited or hired in the United States… How this will be ultimately interpreted is anyone’s guess. There have been some reports of Americans being stopped en route to Kurdistan and questioned (as to whether the government was just trying to determine if the subject was going to be a Jihadi or not is unanswered). No doubt as recruitment increases, so will scrutiny. That said, if they want to get you, they will. Look no further than the [now dead] Eric Harroun. Yes, Harroun ended up with getting cozy with Al Qaeda, which didn’t exactly help his case.

Many of our readers, invariably OIF veterans, have expressed desires to go back to Iraq and fight ISIS but it seems there are some collective concerns. They mostly add up to this:

Will I be stuck in the rear with a bunch of dumbfucks with no training or experience?

Am I just going to be a political prop?

We can’t answer those questions, but to be sure, you aren’t going to know anything about anyone you’re with. When deploying with American units, even if you’re a boot you’ve gone through workups, field exercises, field days, and perhaps a bar fight or two with the people you’re shipping out with. You can get a good grasp of who is capable and competent, and who is a bag of shit or blue falcon. The Peshmerga would probably do well if they instituted a “Buddy Program” like many of the US branches of service have. At least then you’d know someone who knew had your back.

Whether you agree or disagree with the methodology, or about fighting overseas for foreign entities in general, the face of the modern battlefield is changing in ways we didn’t fully anticipate. In the short term, if you want to go there are ways to do it. Possible long term effects or consequences? We don’t have a crystal ball; Life is hard, wear a helmet.

One thought on “Update: Fight ISIS?”