Co witness? Cowitness? Co-witness? What does co-witness mean? Lower one third or eastern left half, or absolutely co-witnessed… 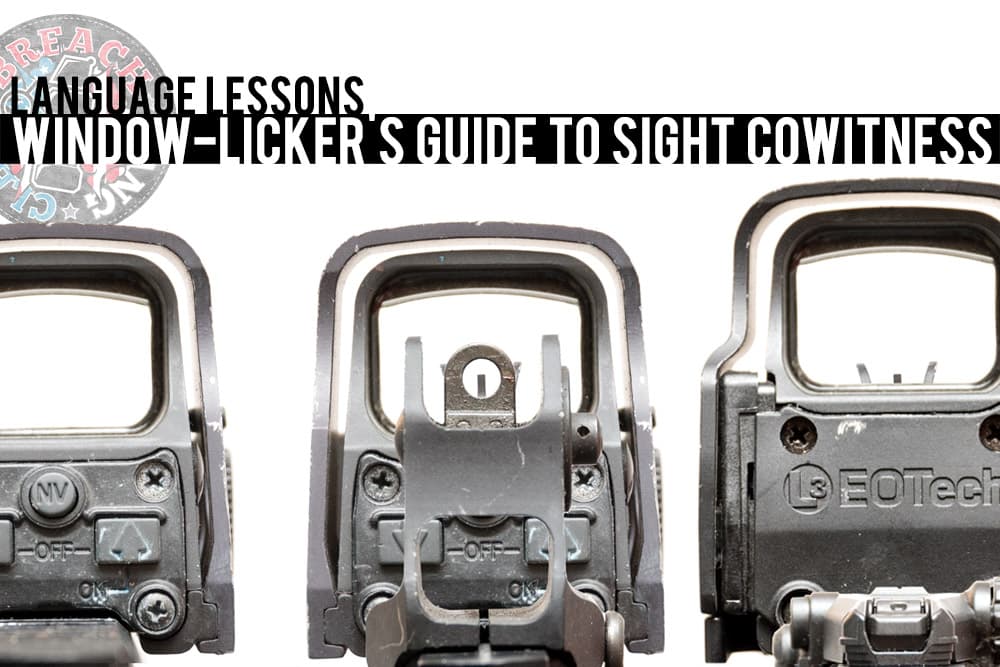 Applications of Use: Shooting rifles or pistols that are equipped with both iron sights and optics in-line with each other.

Definition: The ability to align and use your iron sights or BUIS (Back Up Iron Sights) through the lens or body of your primary optic. 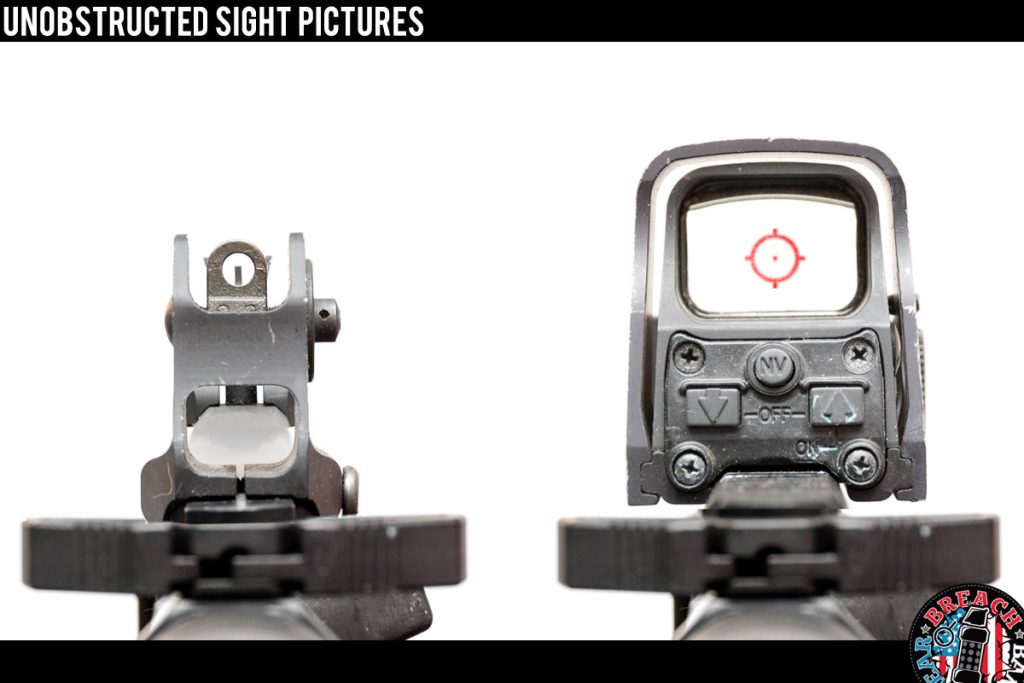 Why it Matters: If your red dot breaks, runs out of batteries, or otherwise becomes out of commission, cowitnessing sights allow for nearly instant transition to a secondary sighting system. 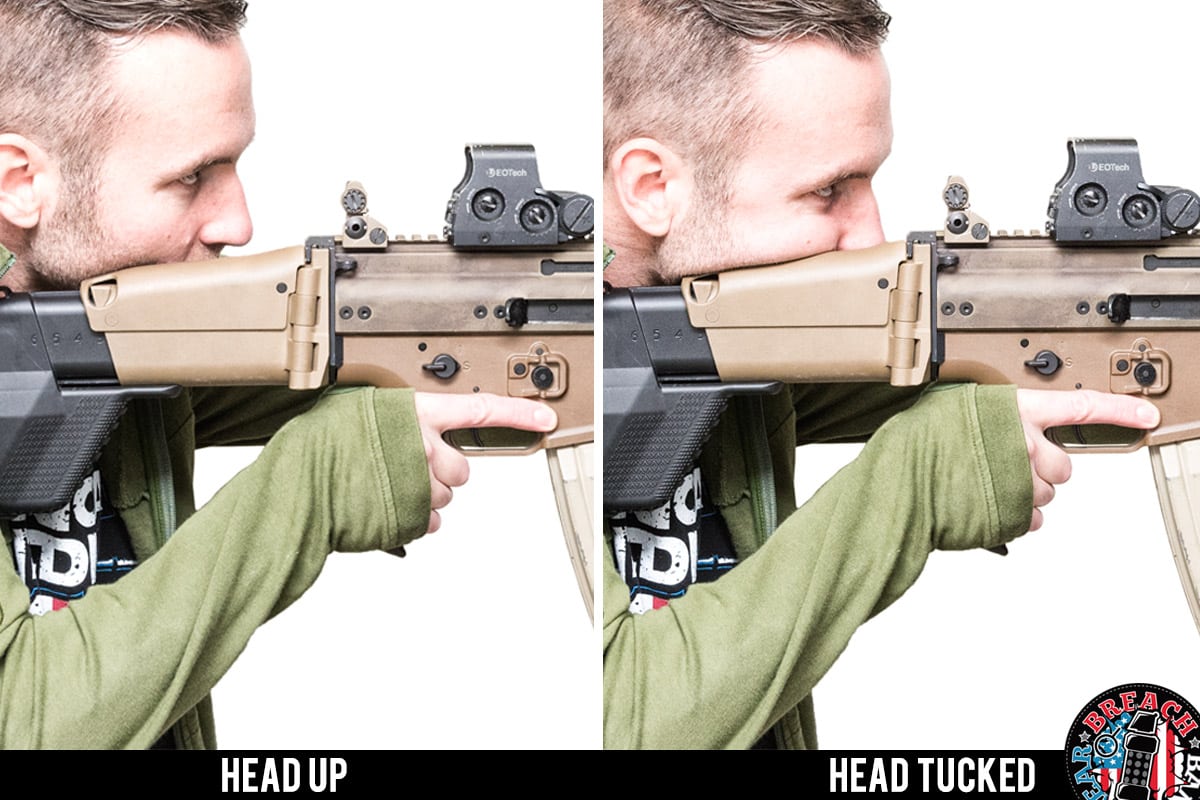 Into the Weeds: This Language Lesson is primarily focused on use with 1x red dot sights (RDS) on rifles. However, some aspects absolutely apply to pistols equipped with a RDS. As LPVO’s (Low-Power Variable Optics) increase in popularity and red dots get more reliable, conversations about the importance of cowitnessing have waned, but it’s still important to know the ins and outs.

There are two main types of co-witness that are normally referenced: 100% (or Absolute), and Lower 1/3rd. With that said, there are a lot of nuances at play.

With 100% or Absolute Cowitness, the point of aim with the iron sights bisects the middle of your RDS. Since modern, quality red dots have minimum parallax (none of them are parallax free) one can look over the top of the iron sights and still acquire the dot relatively unobstructed. If your BUIS are zeroed at the same distance as your red dot, when you look through your BUIS the dot should very closely align with them. 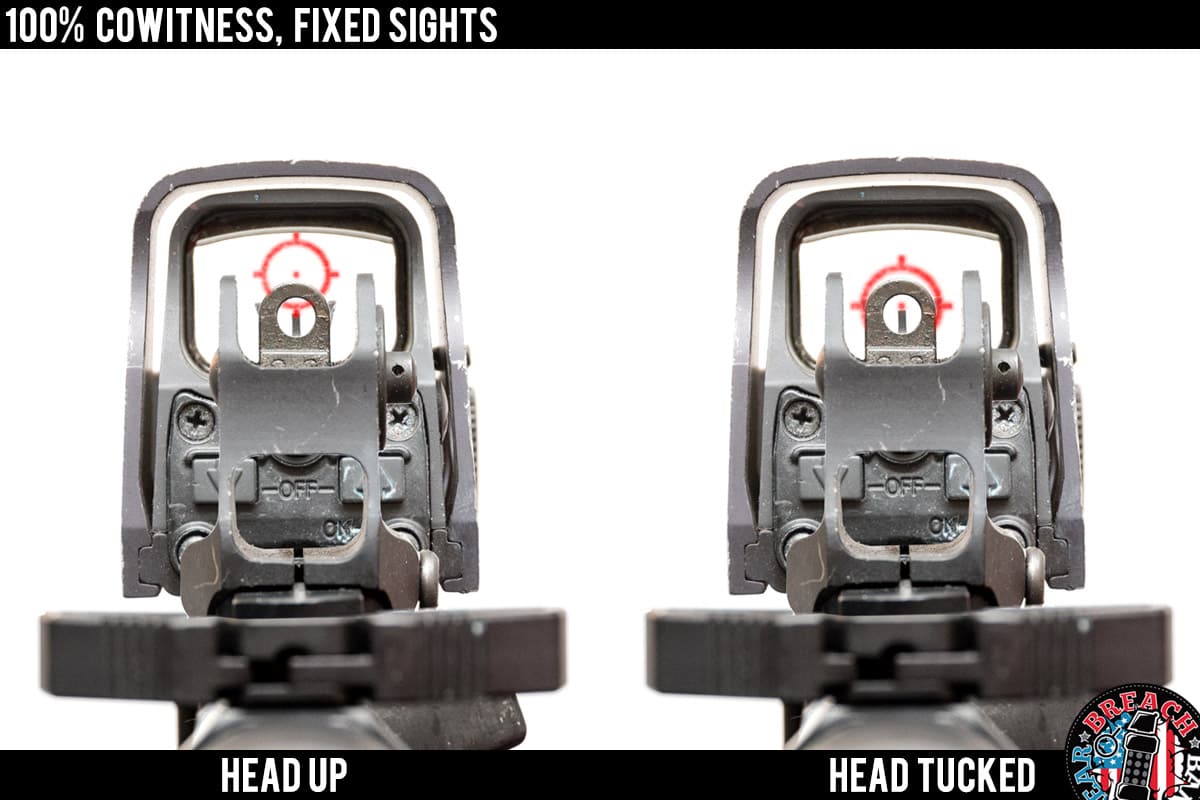 One common method to reduce the amount of space the BUIS resides in the optical window with a 100% Cowitness setup is to utilize a folding rear sight. This is especially popular when used in conjunction with a fixed front sight on an AR-15. With this setup, if the optic goes down, one can flip up the rear sight and continue as normal, or also very common, use the optical window itself as a giant rear sight (this is especially effective with smaller tube sights, such as the Aimpoint Micro). Of course one can also run both flip-up front and rear BUIS for maximum use of the optical window with your primary optic. 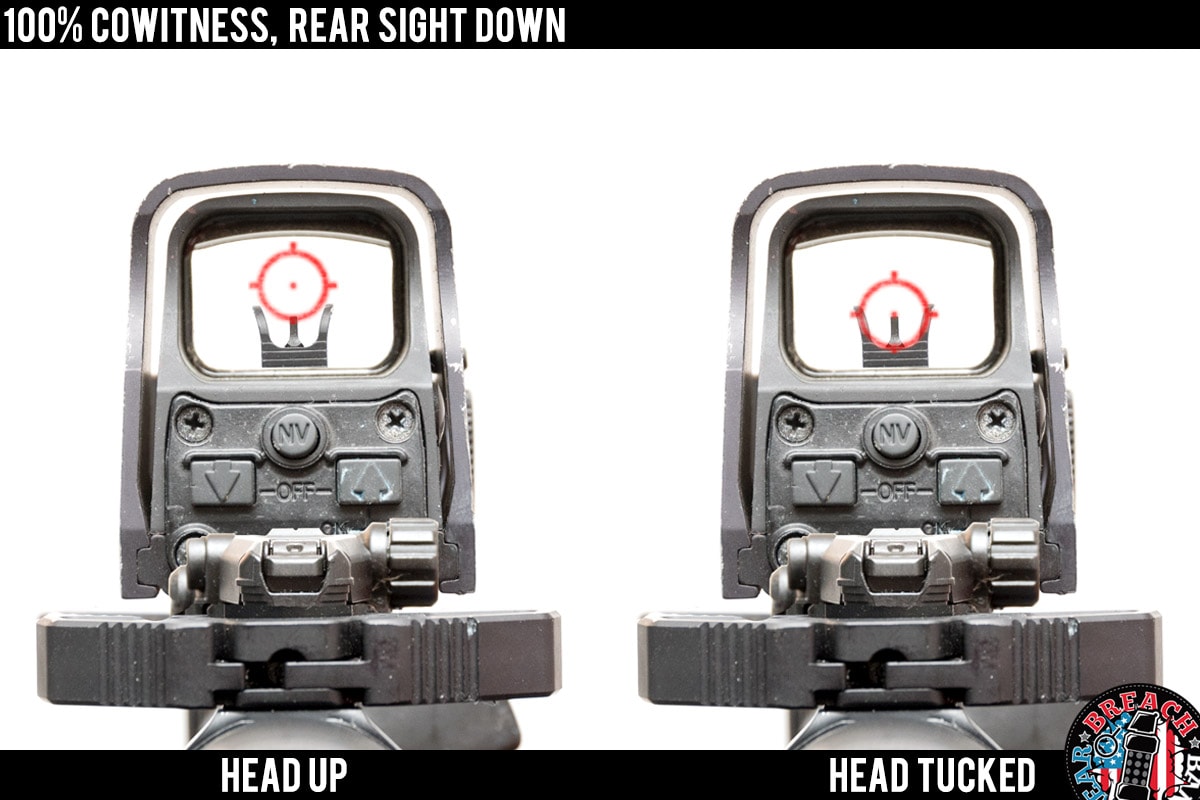 With Lower 1/3rd Cowitness the point of aim with the iron sights falls in the bottom third of your optical window, taking up less space. While the term, “Lower 1/3rd” is often used, exactly how much of the optical window the iron sights reside in largely depends on the combination of optic, mount, and BUIS used. With AR-15 style rifles, a lower 1/3rd Cowitness is achieved by slightly raising the optic, either through a mount or by design of the optic itself. Bear in mind that this means you are also increasing the height over bore (HOB) of your primary sighting system.

For rifles that don’t have stocks in line with the bore, such as with some Sig rifles and the FN SCAR, a Lower 1/3rd Cowitness can be accomplished through the use of a optic meant for 100% Cowitness on an AR-15 but run in conjunction with slightly shorter sights such as Troy Micro BUIS. You get the same effect, but without increasing HOB. 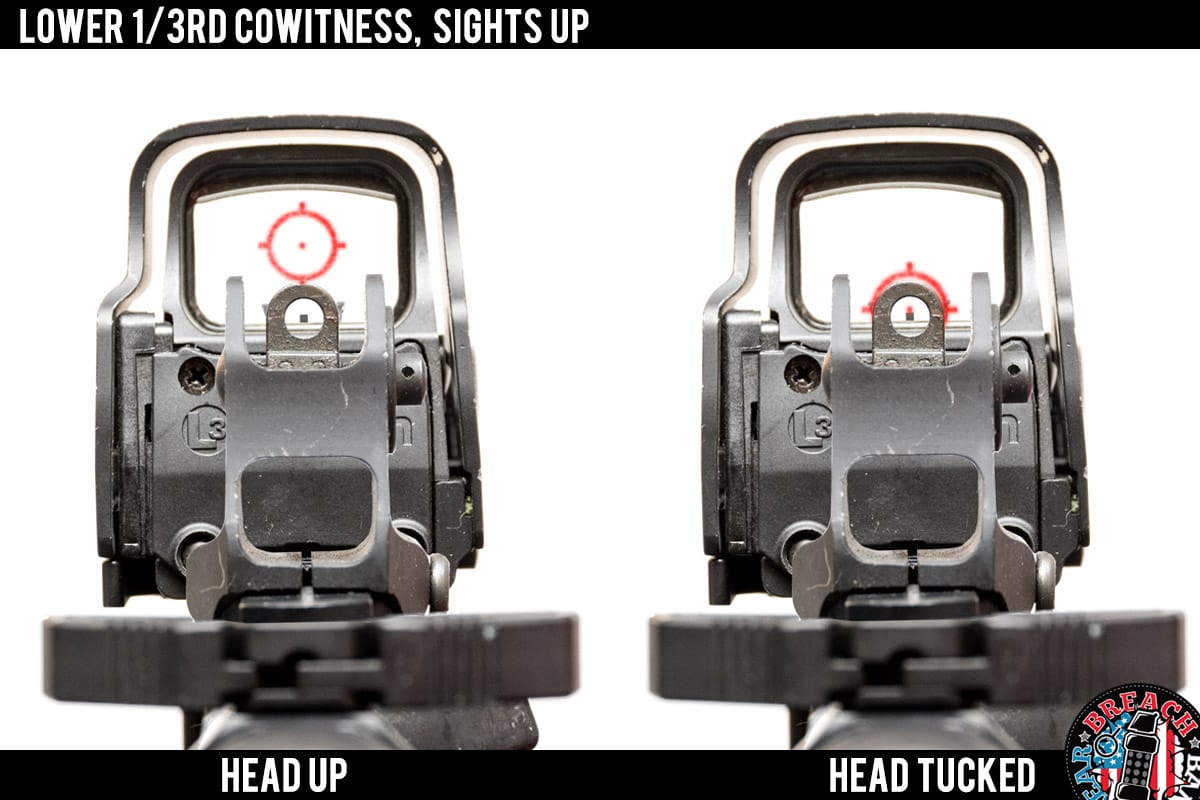 Also as with 100% or Absolute Cowitness, a Lower 1/3rd setup can be used with folding sights to free up space. Still, due to the differences in height, using the optical objective as a giant rear sight is nowhere near as effective beyond very close range. 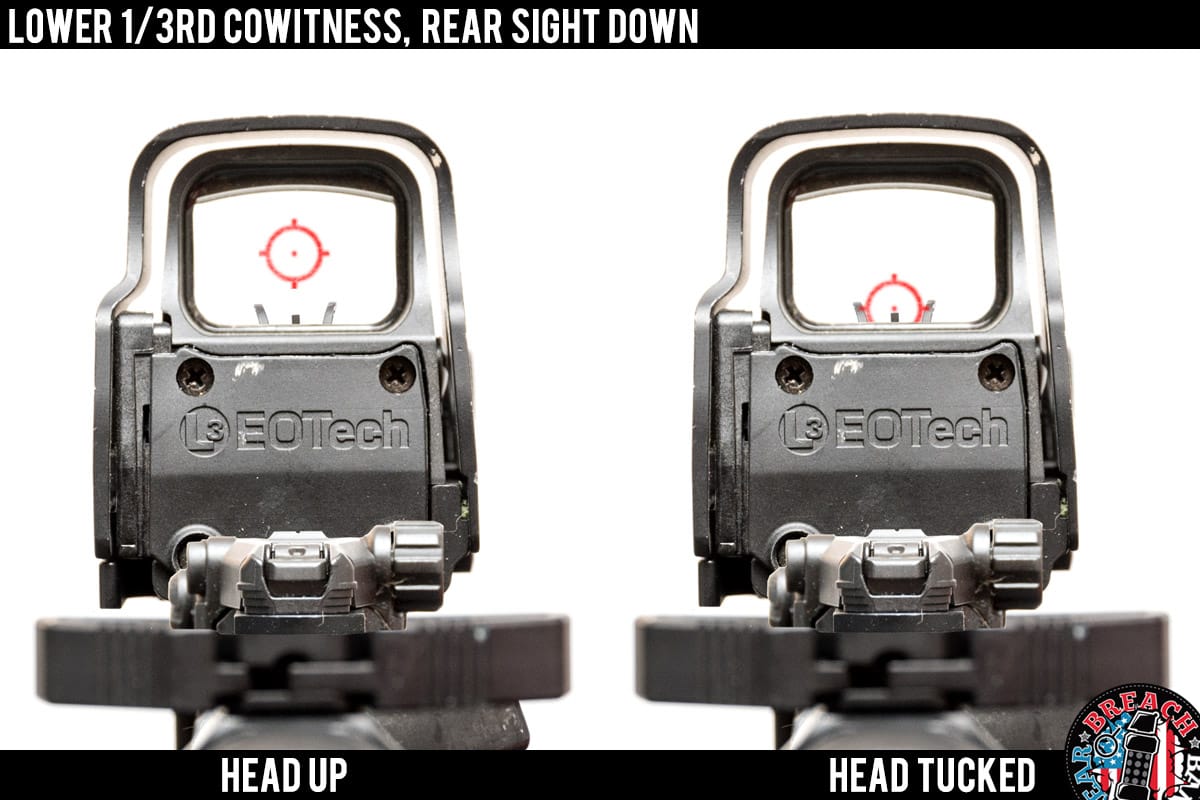 Additional Notes: The easiest way to have the ability to use the most of your optical window possible is have to no obstructions whatsoever in your optical window. This can mean folding BUIS, offset BUIS, or simply no BUIS at all. Fixed or deployed front and rear sights with a 100% or Absolute Cowitness RDS setup allows the least amount of leeway regarding use of the optical window. 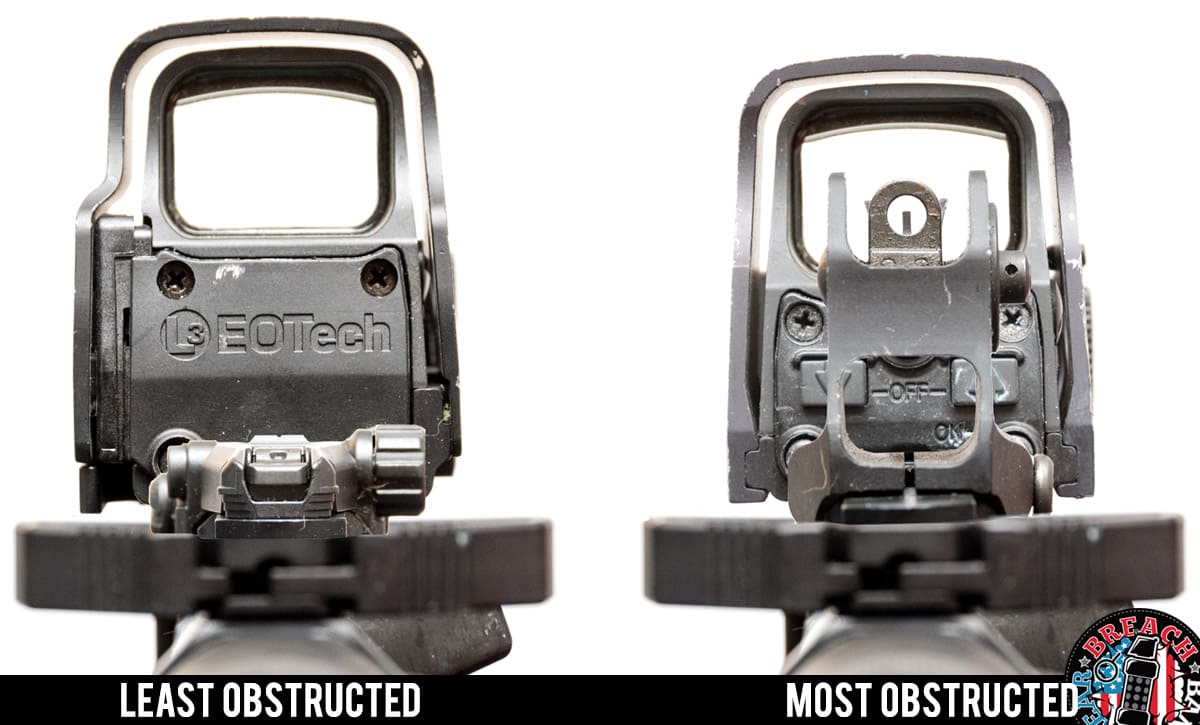 That said, the photos in this article can be a little misleading; for the sake of clarity and demonstration all planes are shown in focus. It may work that way in video games, but not in real life. When you’re target-focusing with a RDS, much of the optic body and sights themselves become out of focus and “ghost out”. The larger the window and the closer it’s mounted to your eye, the greater the ghosting effect.

Furthermore, if you’re shooting with both eyes open (and you should be, if it’s physically possible to do so) the dot will superimpose itself over both eyes due to our binocular vision. This allows for maximum visibility, and so long as one eye is lined up with the red dot, the size of the optical window doesn’t matter and the ghosting effect remains the same.

With that said, sight height and window size still can matter. It can be pretty sucky to obtain a clear sight picture with a 100% or Absolute Cowitness while you’re wearing a protective mask. A larger window, though it increases the overall footprint of the optic, allows for greater variation in cheekweld, which is particularly important when shooting from unconventional or otherwise compromised positions.

As a side note, when viewing a red dot through a rear aperture sight, it will often become better defined due to the narrow beam of light hitting your eye increasing your depth of field (looking through any small aperture or even squinting also increases the depth of field of your vision, at the cost of reduced peripheral vision and light transmission). The same effect can usually be seen when using a magnifier.

Because modern RDSs have very little parallax, many will ‘ghetto zero‘ irons by lining them up with a zeroed optic, or vice versa. While this is a neat trick to help get you on paper, BUIS and optics should always be zeroed independently and confirmed separately–at least if you care about actually hitting where you’re aiming.

In Summary, cowitnessing is simply the ability to use iron sights through an optic body, and there are several ways to accomplish this.

Question for the Crowd: Do you use Absolute or Lower 1/3rd Cowitness with your red dots? Or do you just skip the BUIS entirely? 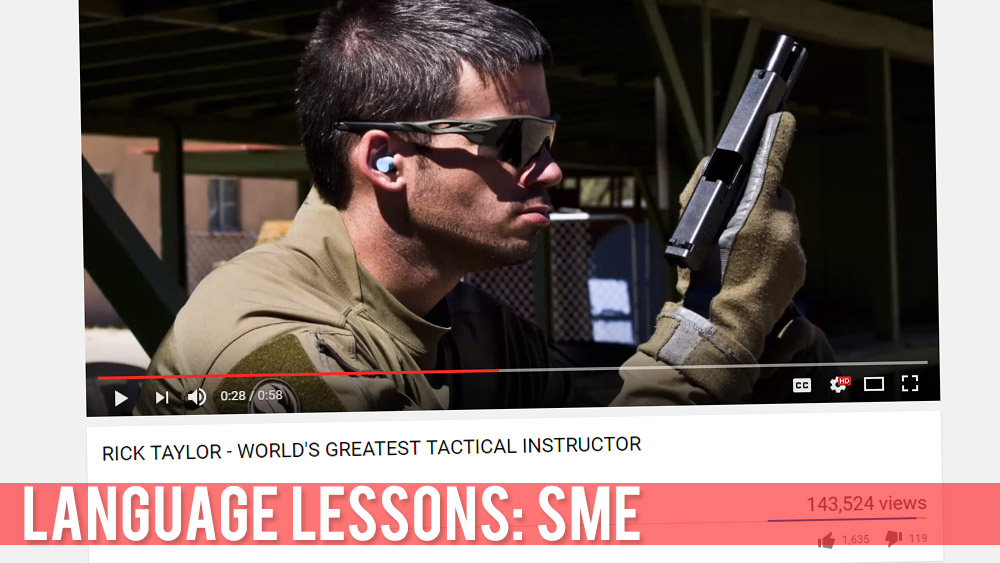 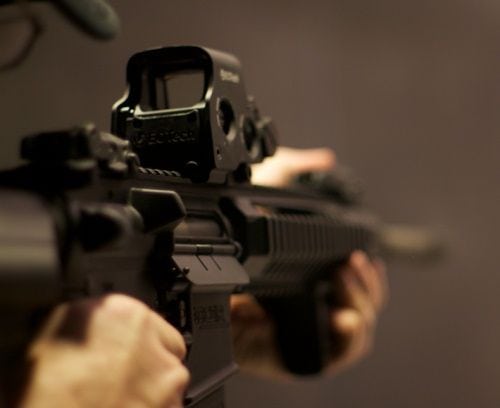 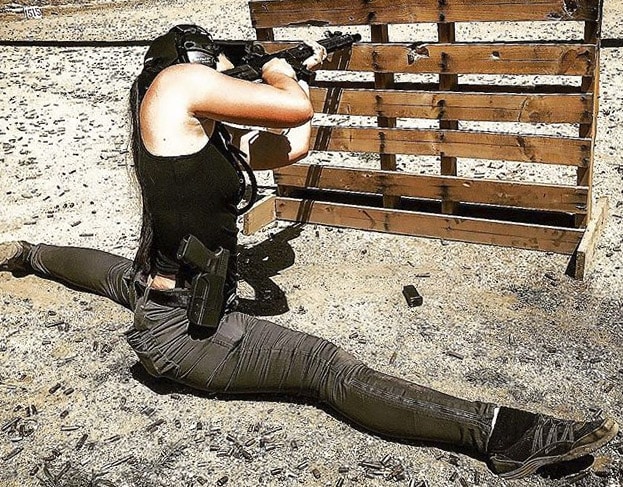 4 thoughts on “What is CO WITNESS?”