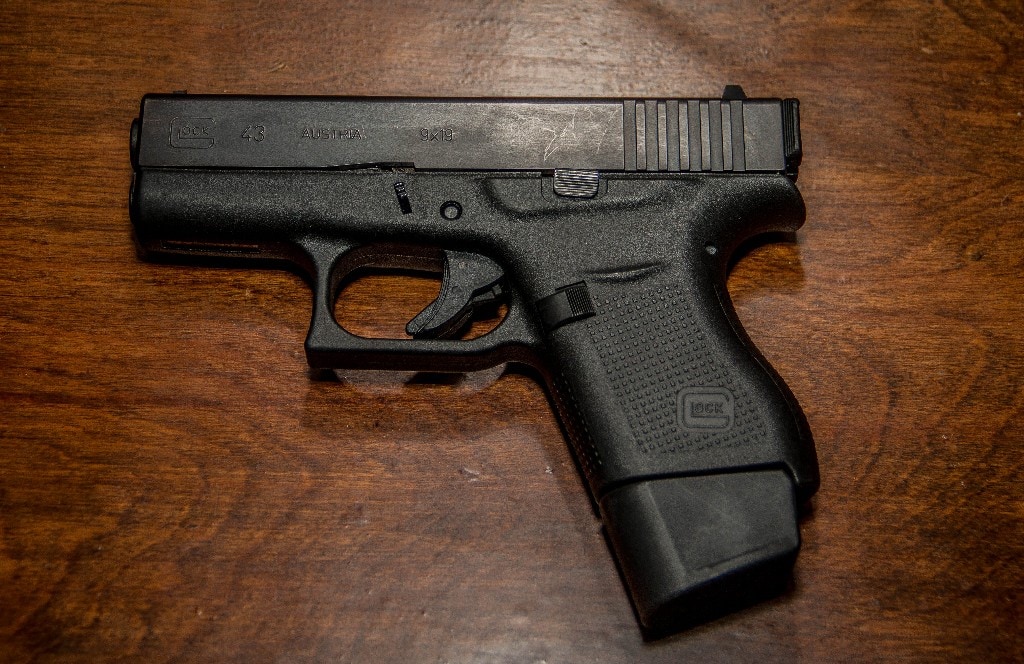 I tend to not jack with my pistols’ internals. I’ve seen too many problems with race guns, and heard too many horror stories about “improvements” causing malfunctions. So when I received a number of Glock 43 accessories from Vickers Tactical in a care package — specifically a Tango Down Glock 43 care package with a beefed-up slide stop, improved mag release, two +2 mag extensions and a “Slide Racker” — I was a bit skeptical. I work a plainclothes, non-enforcement police job now, carry my G43 on duty and really didn’t want to risk screwing up my primary weapon. But Tango Down sells good stuff, and the accessories were Vickers products, sooo…

I decided to try the accessories out, and hope for the best.

Before I go any further: why do I carry a Glock 43 instead of a larger pistol? Because it’s flexible. As I said, I work a non-uniform, non-enforcement position now. I don’t need to carry my G22 every day, and after 17 years of carrying a G27 off duty it started to feel like a brick. My 43, however, is almost the most concealable pistol I’ve ever owned; during my daily walk to work I carry it in a pocket or appendix holster with a 6-round mag loaded, then at work I load a mag with a Taran Tactical 3-round extension, slide my custom security holster onto my belt and have a decent duty weapon. I wouldn’t carry it on patrol, but I also wouldn’t feel undergunned if I were to draw it on a robber during my lunch break. I’m a small-framed guy, and a small-framed 9mm that goes from a near-invisible pocket gun to a ten-rounder in a security holster pretty much covers all my bases.

But I know the gun’s limitations, so I do my best to make up for them. I never carry less than two 8-round spare mags off duty, and on duty I carry a mix of three or four spare eight- and nine-round mags. If I ever do get into a shooting with my 43, I know I might have to reload like a man possessed.

Which is where the Vickers accessories from Tango Down come in.

The Vickers slide stop, mag release and Slide Racker seemed like a great way to make my 43 less of a “compromise” gun. So I went to Texas Tactical outside Houston, and had Scott DePriest mount the accessories (I also bought one mag to mount one +2 extension; Tango Down sent two, but I’ve seen extensions spectacularly fail and wasn’t going to invest the money in another mag until the Vickers was proven). Then I took my 43 to shoot my departmental qualification course, and to a class specifically for off-duty weapons.

Here’s what I learned:

Tango Down says “the unique shape prevents accidental magazine release if placed on a hard surface.” That’s a good feature; I’ve never personally seen a G43 mag accidentally released by a flat surface (or from falling and landing on a flat surface), but I’m sure it could happen at an inopportune time.

3) The Slide Racker is the fookin’ bomb. 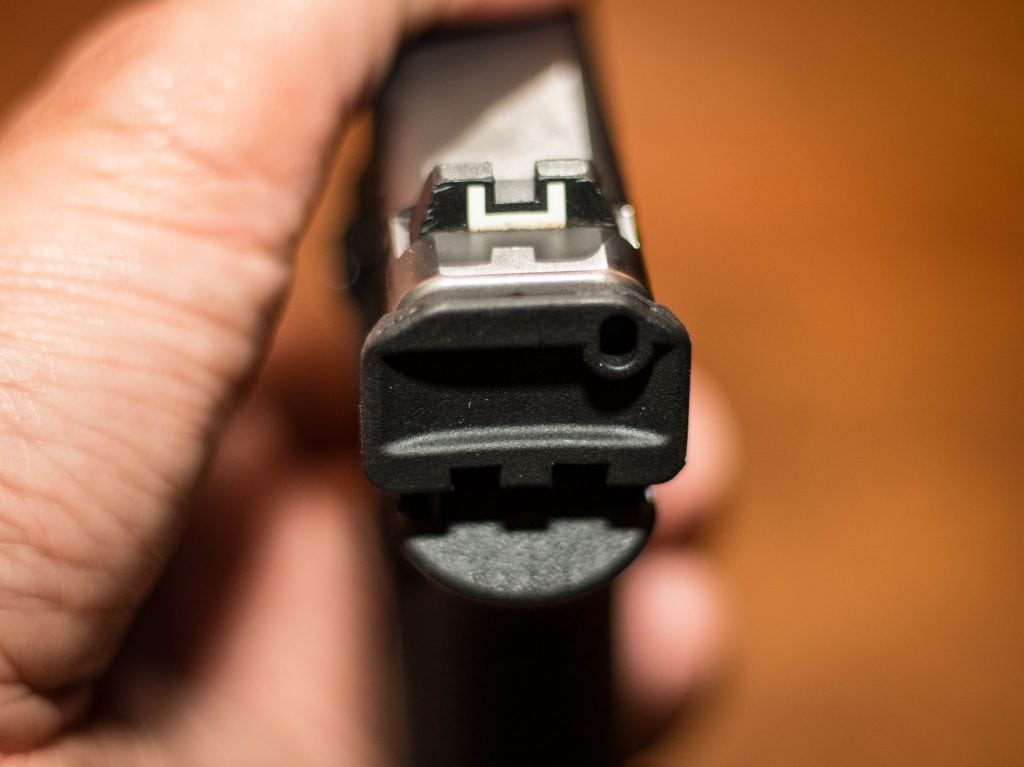 Years ago I was trained to always rack the slide with my entire hand. In the last couple years I’ve seen respected trainers advocate the slingshot method because it’s faster, but my old way felt more reliable under stress. The Slide Racker, however, lets me reliably slingshot the slide and get back on target faster than the way I’ve always done it, without having to take my weapon off the general area of the target. 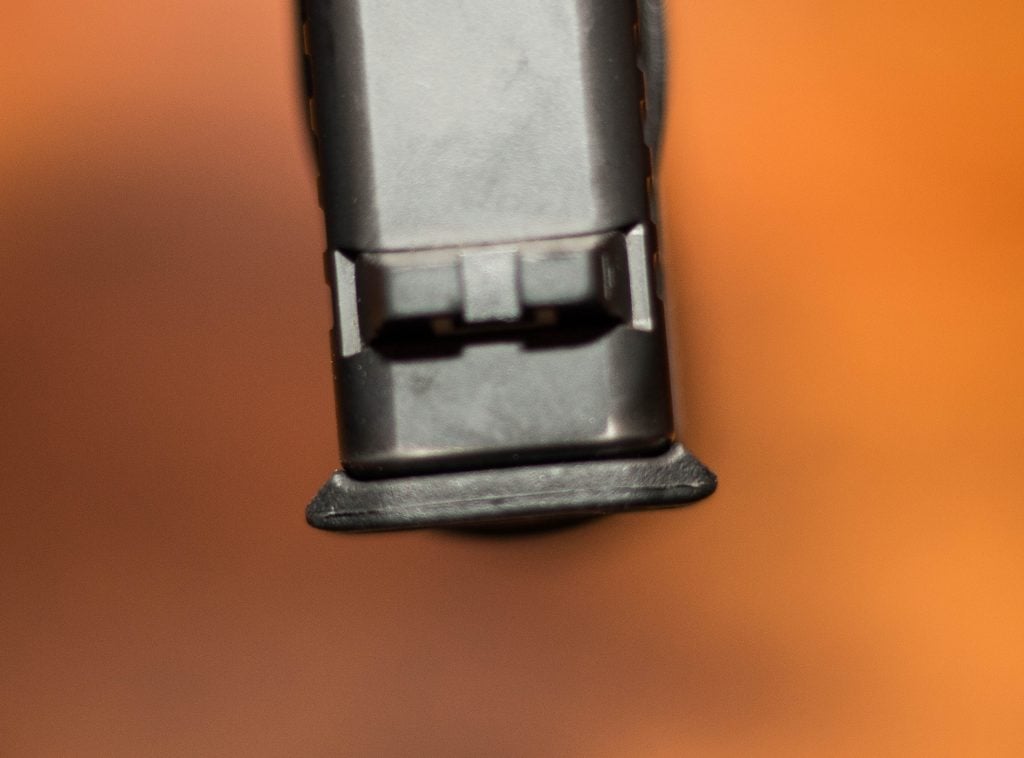 Having said that, I have to call out Tango Down on one of their claims: “Even if you’re down to one hand, cycling the slide against your belt, holster or heel is quick and positive [with the Slide Racker].” Nope. The Slide Racker’s wings are tapered, and every time I tried to use the wings on a hard surface it slid off. As far as I can tell the wings are for quick finger grip only, and to rack the slide one-handed I’d still use the rear sight to catch a hard edge. 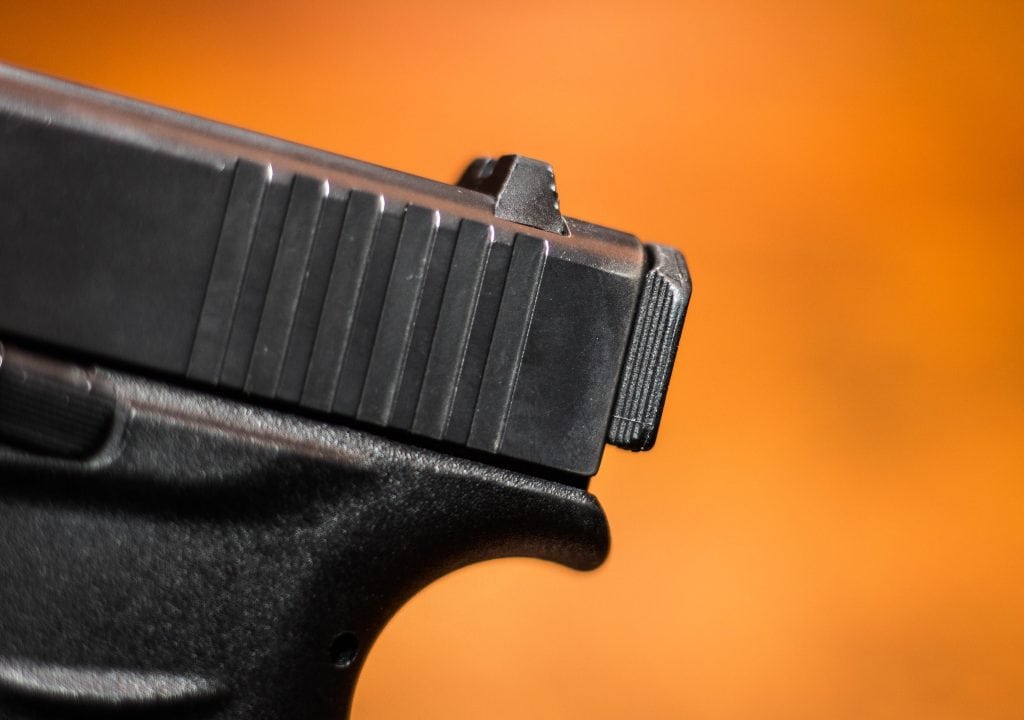 The Slide Racker did have three minor drawbacks. At first glance from behind the gun, the Slide Racker makes the slide look out of battery. It took a few presentations from the holster before I finally quit reaching up to clear what I thought was a failure to feed. 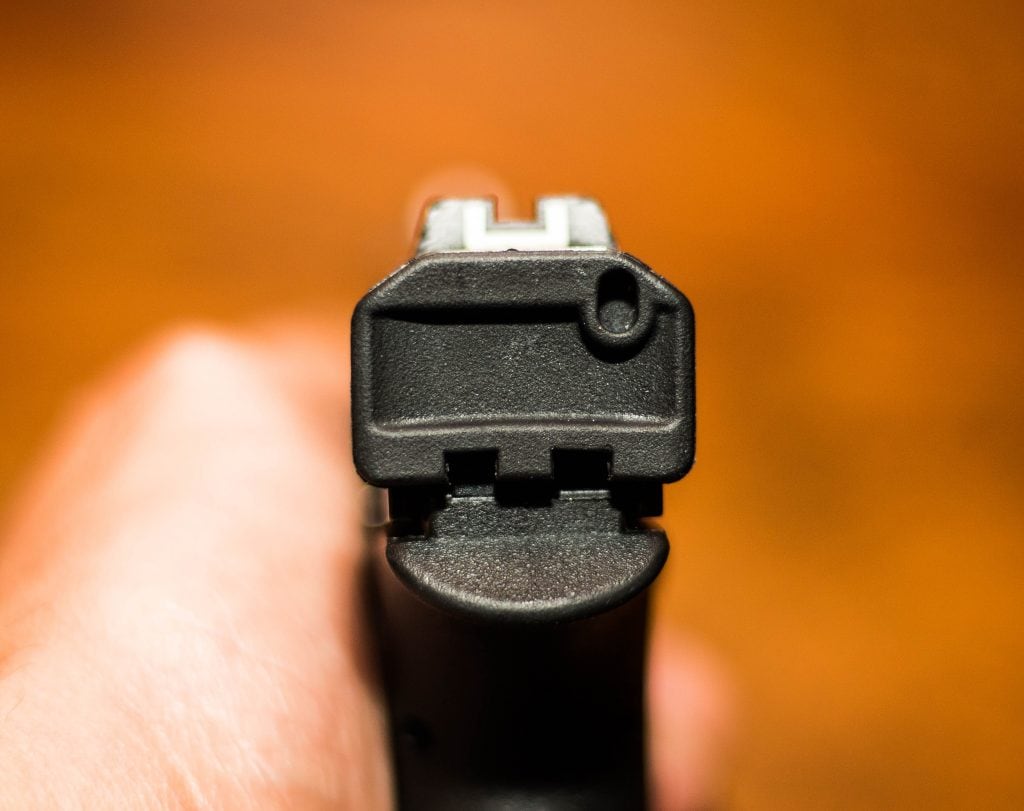 The second drawback, and this won’t affect the vast majority of G43 users, is that the extra mass at the rear of the slide can interfere with a holster strap. That’s a concern for me because, as I said, on duty I carry my 43 in a custom security holster. If you carry in an official capacity and plan on ordering a custom holster, or if one pops up on the market, factor in the Slide Racker’s extra length and width for the strap. The third drawback is that the Slide Racker’s pronounced wings can print, especially if you’re appendix carrying. So don’t wear spandex shirts to cover your gun.

4) I’m real sketchy about mag extensions. One dark night in the ‘hood my partner’s mojo got totally jacked by bad mag extensions, and it took a lot of convincing before I trusted Taran Tactical’s +2s. I now consider them the gold standard, as I’ve never had a single malfunction with one (both of my TT +3s failed to feed the last round, the first time I used them). So the Vickers extensions had a lot to live up to. 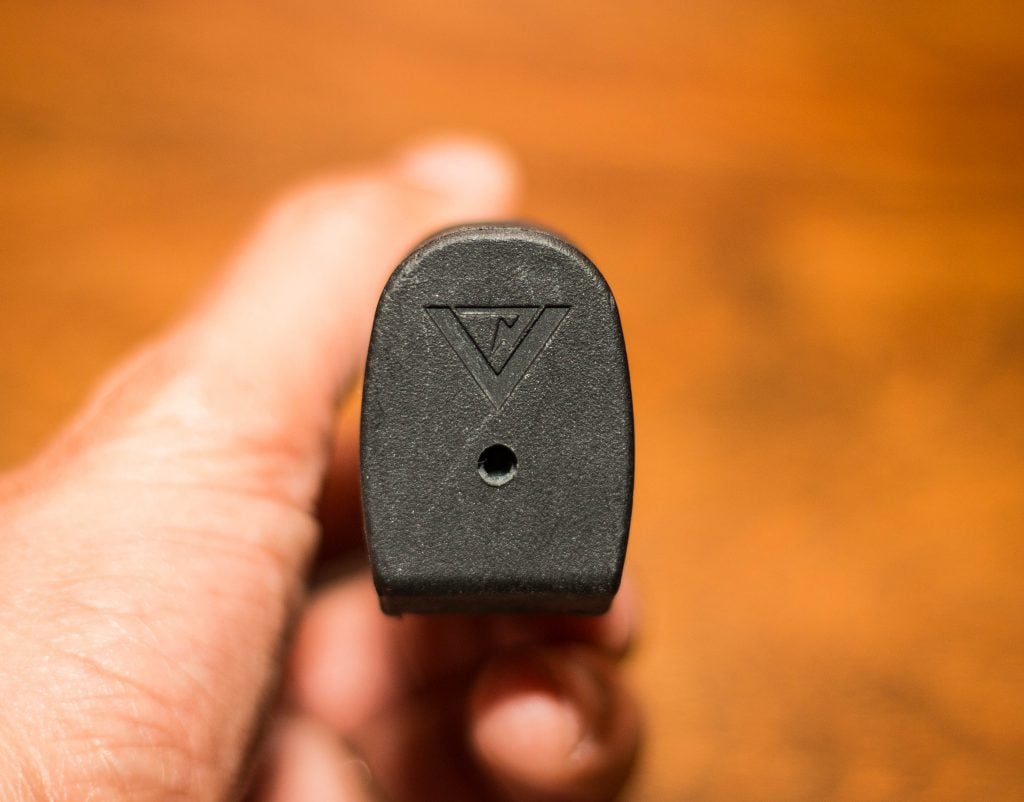 The Vickers extensions performed almost flawlessly. No malfunctions, no failures to lock the slide, nothing. Well, nothing but a repeated failure to drop free.

Honestly, I don’t think it dropped free once. That’s no big deal, since I’ve had sticky mags in a lot of weapons. If I realize the mag is stuck as soon as I release it, I strip it out with the edge of my weak hand on the way to grab a fresh mag; if I don’t realize it until I’ve grabbed the fresh mag, I strip it out with the edge of my thumb as soon as I come back up. So it’s not a dealbreaker, and who knows, maybe it was just that mag and had nothing to do with the extension. I’ll get the other Vickers extension mounted soon and retest. 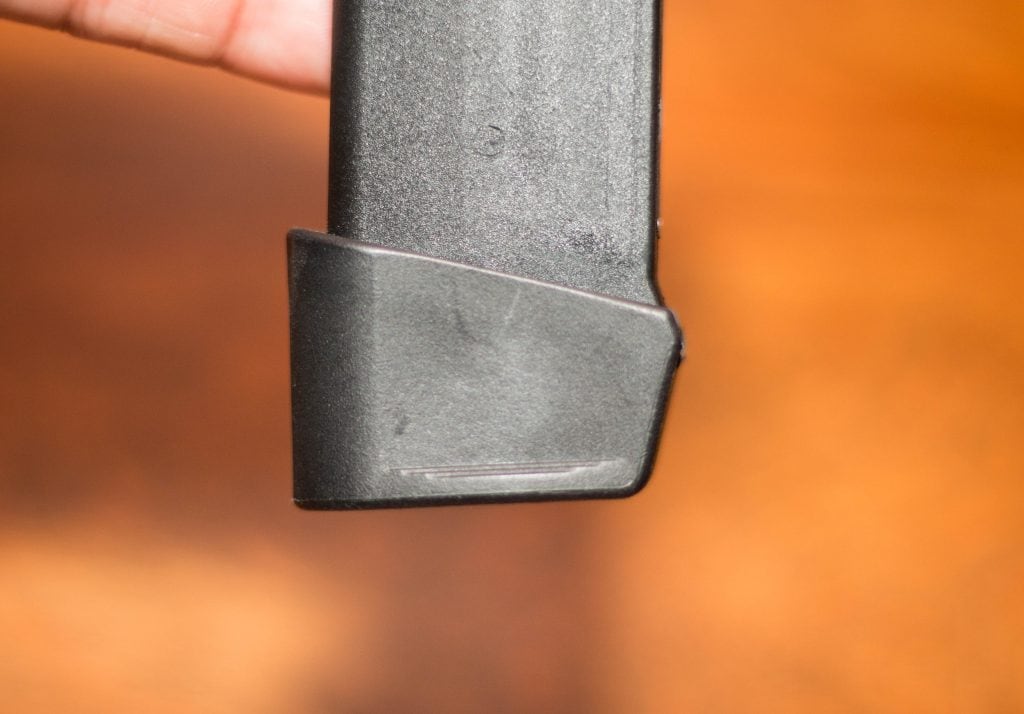 My opinion overall? The Vickers accessories made my awesome little gun an awesomer little gun. The slide stop, even if I’ll almost never use it, improves my one-handed capabilities. The Slide Racker gets me reloaded faster without taking my weapon off the target. The extension-equipped mag always feeds and locks the slide back on the last round, and even if it never drops free I won’t sweat it. The mag release didn’t arouse me much, but it sure didn’t hurt anything. So if you love your G43 like I do and want to enhance its effectiveness, Vickers and Tango Down are like a vote for Pedro: they make all your dreams come true. 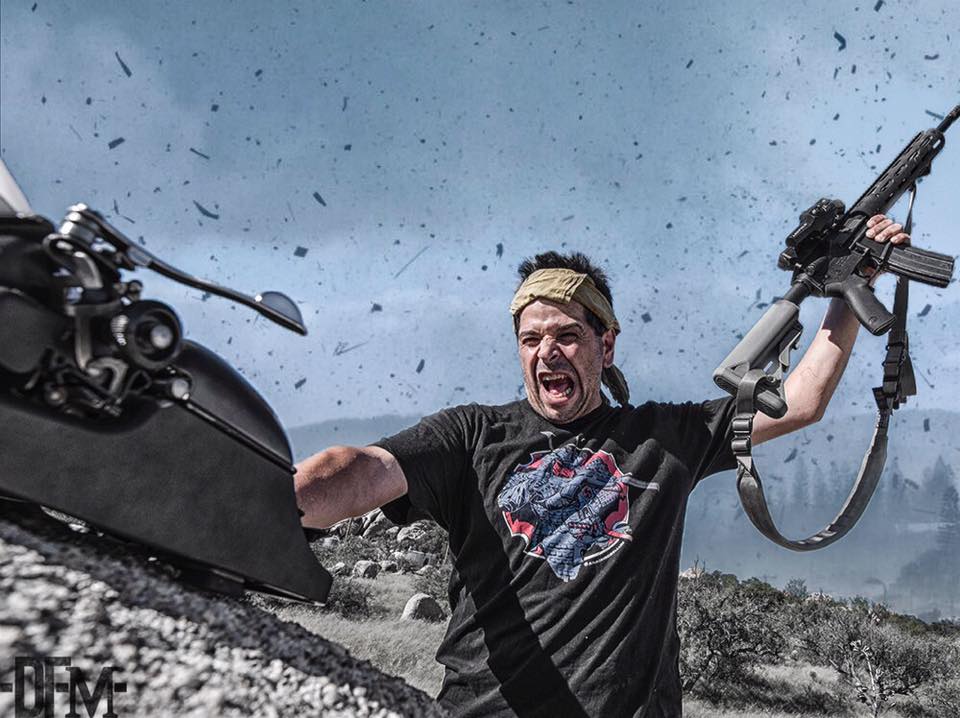 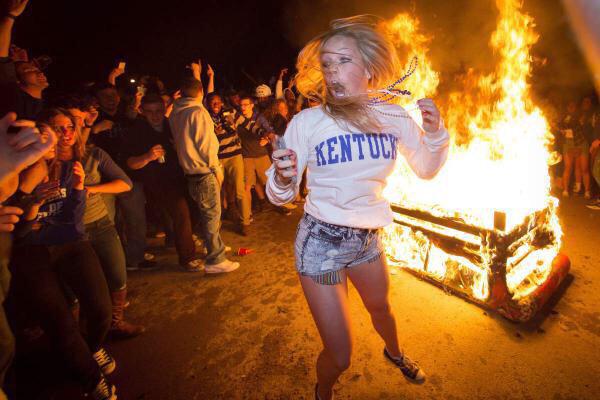 So – White People are Allowed to Riot? 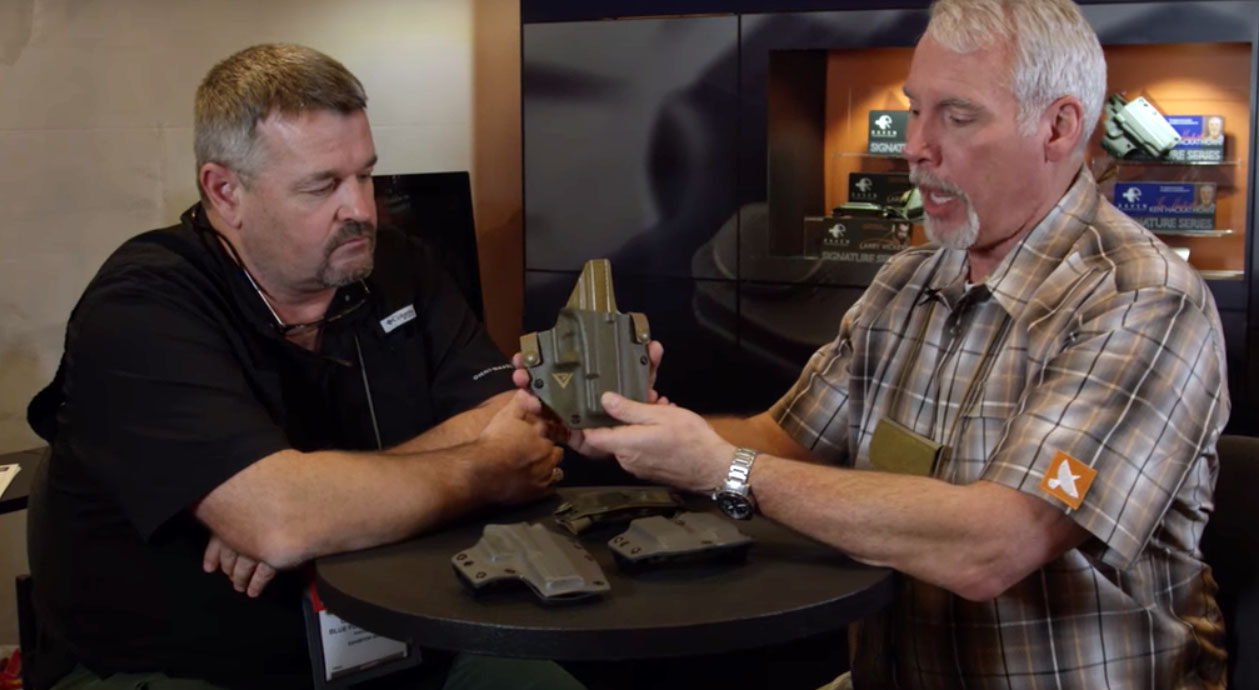 One thought on “Tango Down Glock 43 accessories review”