White flags and dropped rifles? The real truth about working with the French Army

This morning’s article is by guest author Chris Hernandez, another Texan member of the Breach-Bang-Clear team. Chris is a combat veteran (he takes great pains to make it clear he is not some kind of special ninja operations snake-eater) and in our humble opinion an excellent writer of both fiction (check out his book) and non-fiction (he makes some pointed observations on his blog). This piece is the result of a French Army bashing session gone terribly awry. We made a joke about French soldiers. Chris threatened to melt us with a magnifying glass if he we kept it up. Though a neighborhood-leveling brawl ensued, we eventually became friends again and asked Chris to tell us about his experiences when he was embedded with the French Army. His thoughts follow. This is Part I of V.

Working with the French Army 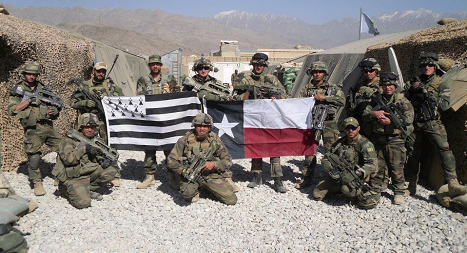 In Afghanistan I worked alongside the French Army. This made me world famous in France. As a matter of fact, I even made the August 2009 cover of RAIDS magazine, which is a sort of French Soldier of Fortune:

I look awesome, don’t I? Unfortunately, the photographer who took that photograph wasn’t very good. I’m off-center in the picture, in addition to being badly blurred. Here’s another version, where I’m highlighted a bit better:

Okay, so maybe I’m not as big of a deal in France as I thought. However, working with the French Army was still one of the highlights of my military career.

Almost every time I tell someone I worked with the French, I get comments like, “You mean the French have an army?”, “Did they surrender to you the day you got there?”, or some other variation of the “cheese-eating surrender monkey” theme. And if they don’t outright insult French troops, they usually dismiss my experience by saying, “Oh, you must have been working with the Foreign Legion. They’re not really French.”

Those comments really get on my nerves. And they’re flat out wrong. I served with a few Legionnaires and a lot of regular French troops. Whatever the French public’s or government’s politics are, their soldiers are brave, well-trained, in fantastic shape and aggressive. Describing those men as cowards is absolutely unfair.

Admittedly, I had a low opinion of French soldiers before I served with them. In Kosovo, the French military had a reputation as being politically biased and ineffective. As a UN cop I worked with French gendarmes, a type of military police officer. They didn’t like the regular French military either.

So in early 2009, when I was told I was going to a French firebase in Afghanistan, I was a little worried. I didn’t speak French, didn’t have a positive view of their troops, and was worried I’d be stuck inside the wire with people who didn’t want to be in combat. I had spent all of my Iraq deployment in a humvee on a convoy escort team; that mission sucked, and I wanted nothing to do with fobbit life or force protection. In Afghanistan I wanted to spend as much time as possible on foot with guys who wanted to fight. The French didn’t seem that type.

Then I started investigating. I went to soldiers who had been in Afghanistan for a while and asked what they thought about the French. And I heard something I didn’t expect, a phrase I was to hear many times during my deployment:

“The only soldiers here who really want to fight are the Americans, Brits and French.”

This phrase was, of course, totally unfair to the Australians and Canadians. It may have been unfair to the Germans, who had a reputation as frustrated warriors whose government didn’t allow them to blitzkrieg Taliban like they wanted to. It didn’t give nearly enough credit to some Afghan National Army units who were aggressive and eager for battle.

However, in addition to giving the French well-deserved praise, the phrase did address a certain unpleasant truth. Some countries, apparently in response to American political pressure, grudgingly sent troops to Afghanistan. Those troops were either mandated to stay inside the wire, or when they went out showed zero desire to risk their lives for a cause they must not have believed in.

As an example, one of my best friends worked with a different nation’s troops (I won’t name which nation because I have no firsthand experience working with them and don’t want to slander them all; however, my friend is a reliable, experienced veteran of multiple deployments, and I believe him). According to my friend, this nation’s soldiers would “patrol” by finding an open field not far outside the wire, sit for hours, then go back to the FOB. They took great pains to avoid danger and when engaged immediately broke contact. He described an experience at the Tactical Operations Center, where cameras caught a Taliban cell emplacing a rocket at a frequently-used launch site. As they watched the Taliban preparing to fire on the FOB, my friend asked, “Why don’t you fire on them?”

One of the foreign military officers answered, “We can’t. They haven’t fired on us yet.”

The Taliban launched the rocket. Without a word, everyone in the TOC jumped up and sprinted for bunkers. They knew from experience that rockets from that site would impact in about fifteen seconds. My friend chased them to cover. A few seconds later the rocket exploded. Everyone ran back to the TOC. The camera showed the Taliban hurriedly leaving the area.

Frustrated, my friend asked, “Why the hell don’t you shoot at them now?”

The answer was, “We can’t shoot. Now they’re unarmed.”

Another foreign military, the Italian Army, was widely believed to have paid the Taliban not to attack them. The French were furious about that, with good reason. In 2008 French Paratroopers took over an Area of Operations from the Italians. The Italians had suffered only one death during the previous year in that AO, and assessed the area as low-risk. The French accepted that assessment, and sent one of their first patrols into the area with light weapons and only 100 rounds each, their then-standard combat load.

The patrol was ambushed. One group of ten troops was separated, pinned down, surrounded and wiped out to the last man. Despite what the Italians reported, Taliban forces were extremely strong in that area. But they rarely attacked the Italians, just as Iraqi insurgents rarely attacked Italians around Nasiriyah when I was at Tallil in 2005.

Gee, I wonder why.

I arrived in Afghanistan six months after that ambush. Over the next nine months, I went on numerous patrols and reconnaissance missions with the French Mountain Troops and Marines. I learned to speak French well enough that I was able to relay information between American and French radio networks. At times I was the only American on French missions. My worries about working with them were completely unfounded, and since then I get pretty angry whenever I hear tired, old “Frenchmen are cowards” remarks.

We in the US military are often treated like mentally-slow kindergartners. I think every last soldier in the US Army becomes homicidally violent at the thought of wearing a reflective belt in a combat zone. I used to shake my head at new unit commanders in Bagram who ordered their soldiers to travel everywhere inside the wire with a battle buddy, even to a porta-john right outside their tent. Many of us, especially senior NCOs, bristle at the hand-holding, “you’re too stupid to trust” mentality that has permeated the Army.

And don’t even get me started on General Order number One, the prohibition on alcohol. I don’t drink, but just about everyone else in the world does. It wouldn’t be unreasonable to allow grown men and women to escape the stress of war with a beer or two. Apparently our command thinks if they allow us to drink we’ll all go on kill-crazy rampages a la Robert Bales. The thought of moderate alcohol use under controlled conditions induces an automatic brain aneurism in our senior leaders. 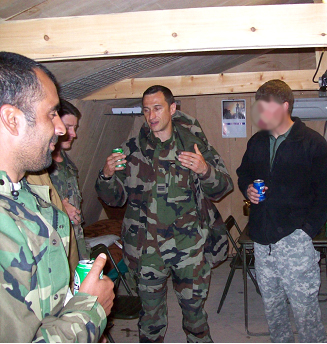 A typical hangout with the French and Afghans. Americans drink soda instead of alcohol to avoid offending Afghans, who of course are drinking alcohol with the French.

The French, on the other hand, don’t have that problem.

This is just the beginning ruminations (grunts: rumination) of my experience with the French Army. In Part 2 I’ll talk about a one-week mission patrol with a French recon patrol, wine on base and their take on sex, sexual harassment and naughtiness. 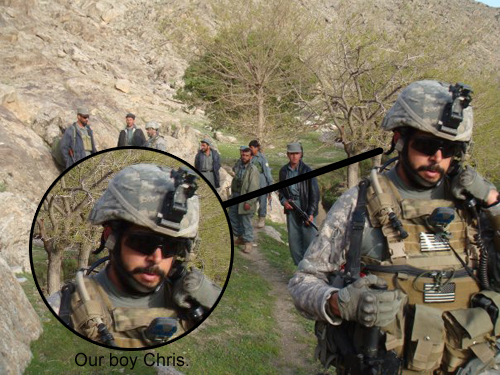 The Author, On Patrol in Afghanistan

Chris Hernandez is a veteran of both the Marine Corps and the Army National Guard who has served in both Iraq and Afghanistan. He is also a veteran police officer, having spent a long (and eye-opening) deployment as part of a UN police mission in Kosovo. Chris is the newest member of our team here and we’re damn glad to have him – he will occasionally be doing some guest ranting here as well as on his own page when he’s not working on the sequel to his novel Proof of Our Resolve. Read some of his other work in The Statesman and on his blog.