Military science fiction is, as you might expect, one of the Breach-Bang-Clear crew’s favorite genres. Some of us write it, virtually all of us read it (which is why it so often appears in the Your Weekend Read column). From the obligatory Starship Troopers and Ender’s Game many of us read as young’uns to later novels like A Small Colonial War and on to more recent works by authors like Marko Kloos, Rick Partlow, Nick Cole, and Jason Anspach.

• Take me to the articles 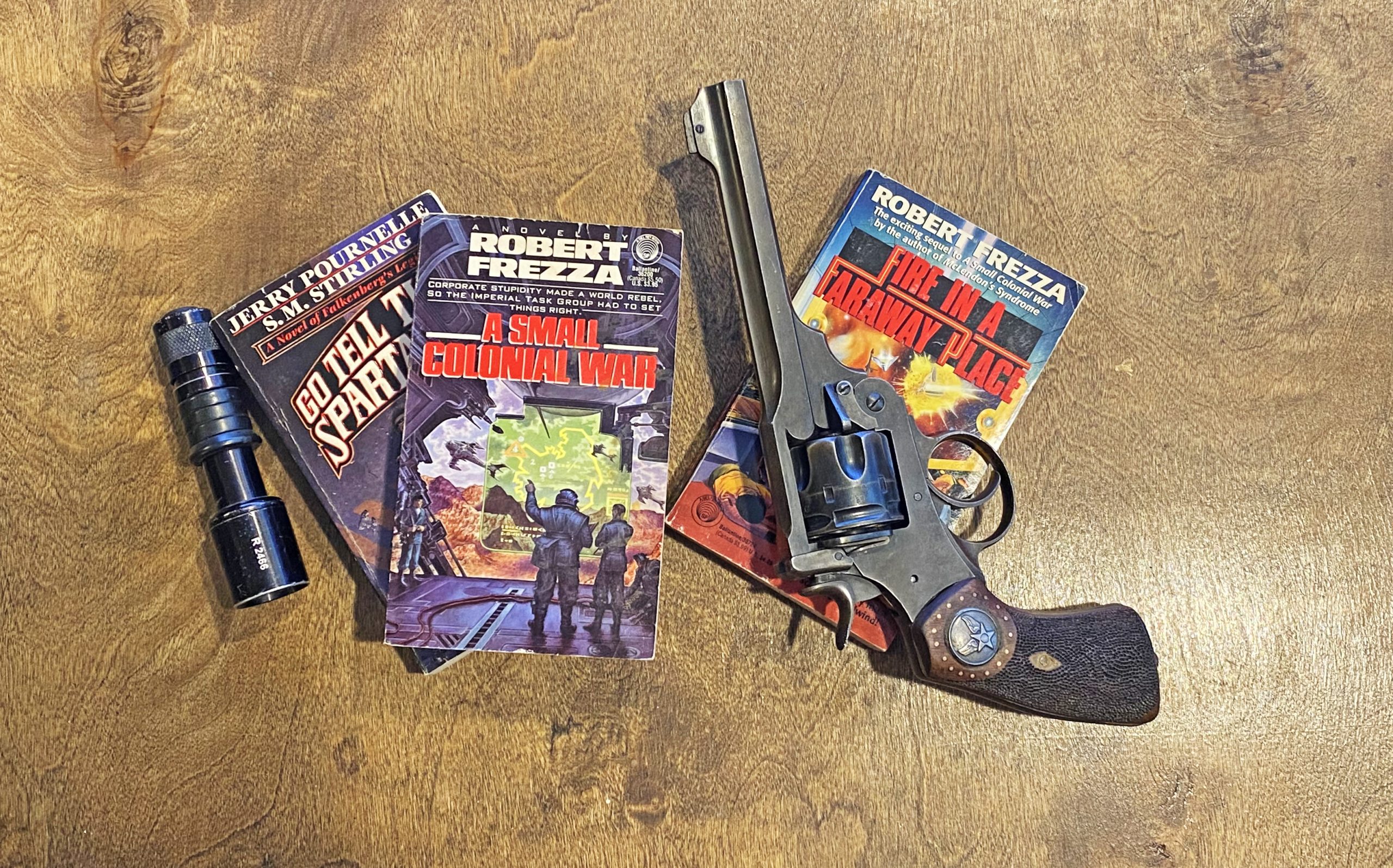 Mil Sci Fi often features a surprising dichotomy of technology. It’s not all laser beams and better-then-hokey religions blasters. Many novels feature such formations as Falkenberg’s Legion and the 35th Imperial Infantry, whose science fiction soldiers are transported to war aboard intergalactic starships but stack bodies with the same kind of rifles we use today.

In a perfect world, we’d be posting military sci-fi updates to Your Weekend Read every week, but alas the real world gets in the way of that. Fact is, it’s easier to relax with a good book than it is to review one, and that’s a shame.

After all, if it wasn’t for reviews and recommendations we’d never have read Terms of Enlistment (Kloos), Big Boys Don’t Cry (Kratman), Decisively Engaged (Carella), or Armored Tears (Kalina).

Trying to keep an ongoing Sci-Fi Soldier SITREP updated would seem to be a Herculean task, given how much good (and for that matter, terrible) military science fiction is out there, and it kinda is. You might just as easily describe it as a Sisyphean task — but in both those cases, there’s a negative context that doesn’t apply here.

After all, if you really enjoy doing something, is it a Bad Thing that seems to have no real end? No sir sez we!

So. What is Military Sci Fi? Definitions vary. In simplest, broadest terms, it is a subgenre of science fiction set in a futuristic milieu that specifically includes a significant military-related theme. Sci-fi soldiers, the experience and psychology of combat, and other, more nuanced aspects. This typically does not include the likelihood of most grunts to bang hot alien chicks regardless of species, but there’s no way we can rule that out.

As with most good fiction, military science fiction may often be classified in multiple ways. Is Adrian Tchaikovsky’s Children of Time/Children of Ruin a military sci-fi book? No. But…yes? Military matters and technology are crucial to the story.

What about the Forgotten Ruin series by Jason Anspach and Nick Cole? Their Ranger protagonists aren’t sci-fi soldiers, not the way Rasczak’s Roughnecks are, and they’re using weapons any GWOT veteran would recognize. And they’re fighting fantasy critters — using an 84mm Carl-Gustaf recoilless rifle against dragons and ogres is definitely fantastical…but they wind up in that future, post-apocalyptic setting by virtue of definite science-fictiony means. So is it a post-apocalyptic novel? Military fantasy? Military Science Fiction?

Here’s the thing. It doesn’t matter. First, the point is to enjoy what you read, perhaps even to be moved by it. Second, this is our website and our blog post. We’ll define things however we want! You can disagree with us, of course.

But you’d be wrong.

Reading Life Hack: get Kindle Unlimited and the Alexa App. She’ll read your books aloud so you don’t also have to get them on Audible.

Related genres, or perhaps the better term would be sub-genres, include stuff along the lines of Space Warfare/Space Navy, Military Space Operas, Space Westerns, Sci-Fi Armor, Future Tanks, et al. At some point we’ll get around to writing about some of those. Probably almost certainly maybe.

We’ll also be listing out some of our favorites, although you can always look at the Military Sci-Fi best-seller list as reported by Amazon.com to get started.

SLOW YOUR FUCKING ROLL. We know. This list, a Work In Progress (WIP), is far, very very far, from complete. And probably never will be. But we’ll try to update it regularly. These links are to Amazon, but you can find the authors on multiple platforms (including brick and mortar stores). Authors in bright blue are US or allied military veterans.

This is how some other folks (and publications) define the genre.

“…a subgenre of science fiction that features the use of science fiction technology, mainly weapons, for military purposes and usually principal characters that are members of a military organization involved in military activity; occurring sometimes in outer space or on a different planet or planets. It exists in literature, comics, film and video games.

A detailed description of the conflict, the tactics and weapons used for it, and the role of a military service and the individual members of that military organization forms the basis for a typical work of military science fiction. The stories often use features of actual past or current Earth conflicts, with countries being replaced by planets or galaxies of similar characteristics, battleships replaced by space battleships and certain events changed so that the author can extrapolate what might have occurred.” Good Reads

Buzzfeed says (and they’re not entirely wrong, though perhaps they’re missing some of the point),

“Military science fiction is tricky because it either intends to lampoon the military-industrial complex or paints it in such a way that you must really have to love guns to enjoy the work.”

Armor, John Steakley’s dystopian military science fiction story, is about a soldier named Felix who is at the same time uncommonly good at – and horrified by – what he does.

END_OF_DOCUMENT_TOKEN_TO_BE_REPLACED

Ashley: the Angel of Verdun (Ours Anyway)

When you think of The Angel of Verdun ya prob’ly think of Rita Vrataski, aka the Full Metal Bitch. But you’re wrong. Her real name is Ashley.

END_OF_DOCUMENT_TOKEN_TO_BE_REPLACED

YWR: In Every Clime and Place

It’s military sci-fi reminiscent of the Banana Wars, with a little of the Barbary Coast thrown in for spice. Check out “In Every Clime and Place” for Your Weekend Read.

END_OF_DOCUMENT_TOKEN_TO_BE_REPLACED

Taking a break from reality, our tamed Australian brings you some fictional tanks to ponder. Tanks. Big, heavy, awesome, powerful tanks. First seeing service on the Western Front in World War 1, and having garnered the name by being intentionally mis-labeled as...

END_OF_DOCUMENT_TOKEN_TO_BE_REPLACED

Robert Heinlein’s Starship Troopers is a thought-experiment of a stable republic able to withstand the swarming, dehumanized anthill of collectivism. It is more philosophical tract than science fiction adventure, a true “science” fiction novel revolving around political science and sociology.