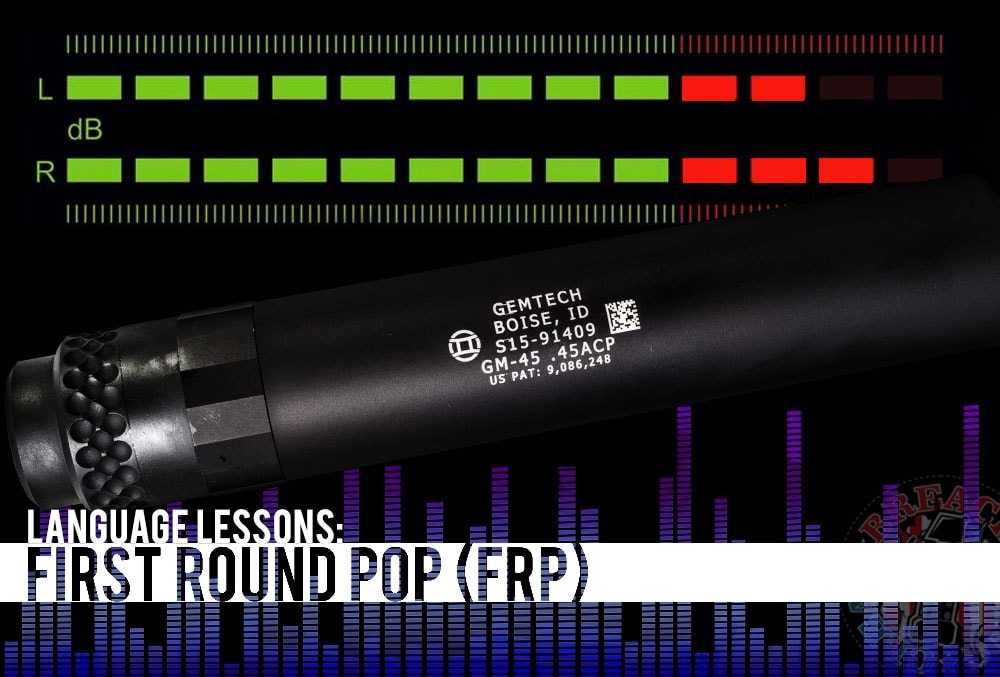 [This Language Lesson about First Round Pop was made possible by JTF Awesome team member PROOF Research. If you don’t know who they are, first knifehand yourself and then check in here]

Applications of Use: Any application where a silencer or suppressor is used

Definition: A shot (fired through a silencer) that is louder than subsequent shots due to the oxygen inside the suppressor burning off.

Why it Matters: “FRP, to some degree, is more important than overall sound reduction because many times, the first shot is the most important,” says Kevin Brittingham, CEO of Q LLC.

Into the Weeds: When the first shot is fired through a suppressor, it’s louder because any flammable atmosphere inside the suppressor itself is ignited by the burning powder. Subsequent shots are quieter because there is less oxygen inside the silencer itself. The time from that initial FRP until another louder shot entirely depends on how long it takes for the suppressor to oxygenate again. It’s just a matter of time. While FRP can be significantly louder than subsequent shots, ‘how much‘ depends on the silencer design, firearm, ammunition used, and the environment.

[What’s going on inside the suppressor]

The higher ratio of oxygen inside a silencer not only makes the the first shot louder, but it also means more flash (silencers are rarely perfect flash hiders). It’s noteworthy that this same effect can be seen not just with silencers but also some muzzle devices, especially linear compensators. 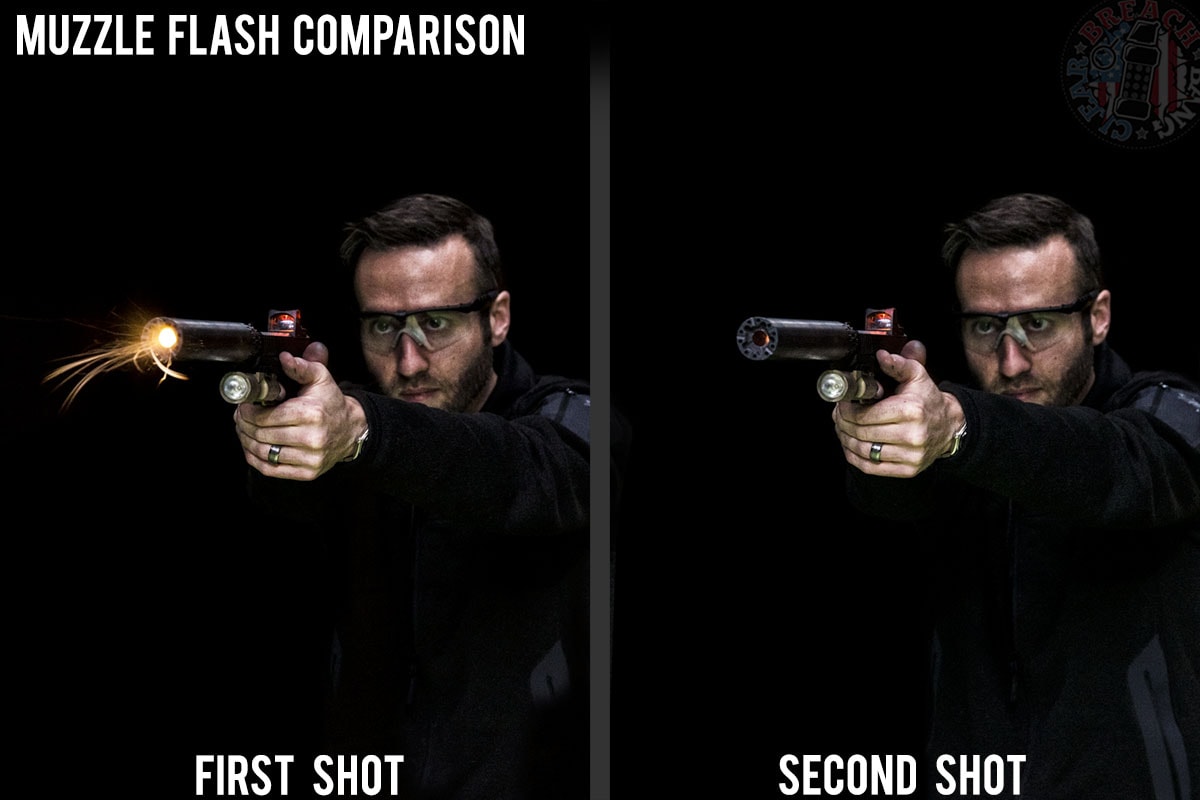 Even in an environment completely devoid of atmospheric oxygen, your firearm can still shoot, provided your ammunition is properly sealed. Inside each cartridge is enough oxygen to burn your powder–which is why firearms can be fired underwater (albeit not all of them safely)

While people don’t complain very much about FRP when utilizing supersonic centerfire cartridges because they’re loud regardless, they tend to pay particular attention to FRP with subsonic calibers and .22lr in any format. If you’re shooting multiple rounds, back-to-back, you’ll most likely forget about FRP. Engineers in the industry continue to work towards eliminating FRP, but the first company to specifically address it was Gemtech. They did this by machining a special hole in the blast baffle, dubbed the Dater Hole (after Dr. Dater) which helps to reduce FRP.

A common method to reduce First Round Pop is to run a silencer wet (there are excellent guidelines in this post). Some people have gone to extreme measures such as displacing oxygen with carbon dioxide or other inert gasses before shooting, which only is viable for a short period of time.

Speaking in very general terms, silencers with more internal volume, such as monocores, will have a louder FRP simply due to the fact that there’s more initial oxygen available to burn. Traditional baffled suppressors with larger blast chambers will also generally be louder, all other aspects between equal. Integral suppressors usually have the least FRP. 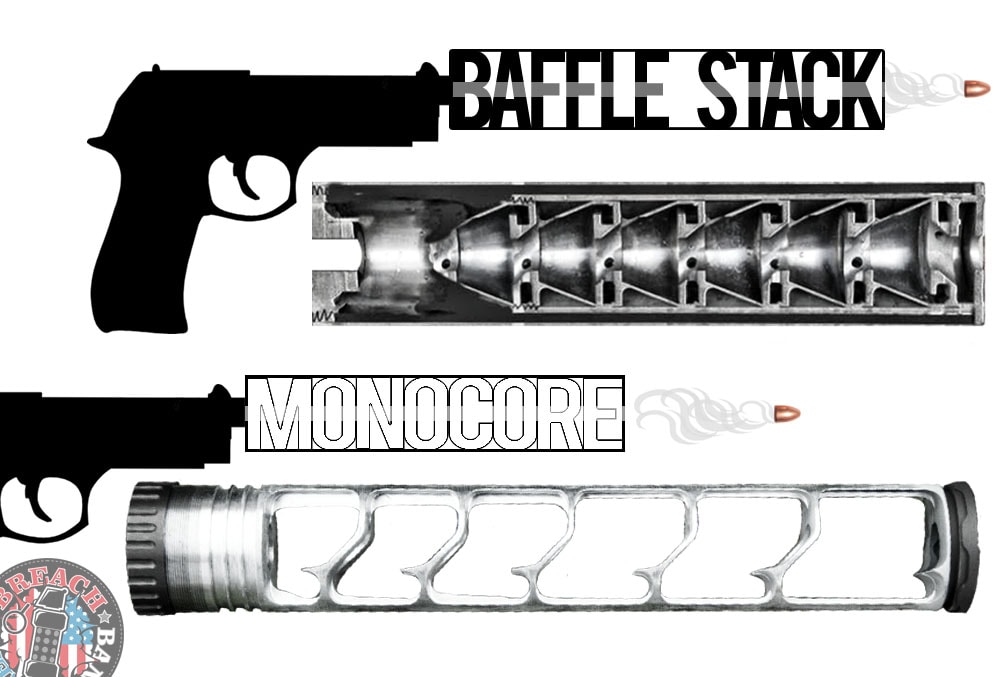 The industry accepted standard for testing decibel (dB) levels of silencers is MIL-STD-1474D, which requires a calibrated meter to be placed one meter left of the muzzle–though there is some contention on whether the microphone on the meter itself should be placed parralel to the muzzle of the rifle or the silencer. Some companies test in additional places, such as “at the shooter’s ear” or at an ejection port. Regardless of where and how they test, how each company actually publishes FRP is highly variable. Some companies average the dB readings of several sequential shots, so the FRP is part of the spread. Others take it out of the readings completely and may or may not note how the FRP itself meters. If you have any doubts, be sure to ask for specifics on a company’s testing method. If they’re not disclosing, there might be a reason.

In Summary, First Round Pop is simply the slightly louder report of the initial shot through a silencer. It’s as big of a deal as you make it.

Question for the Crowd: Do you pay attention to FRP? What do you do to eliminate or reduce it?