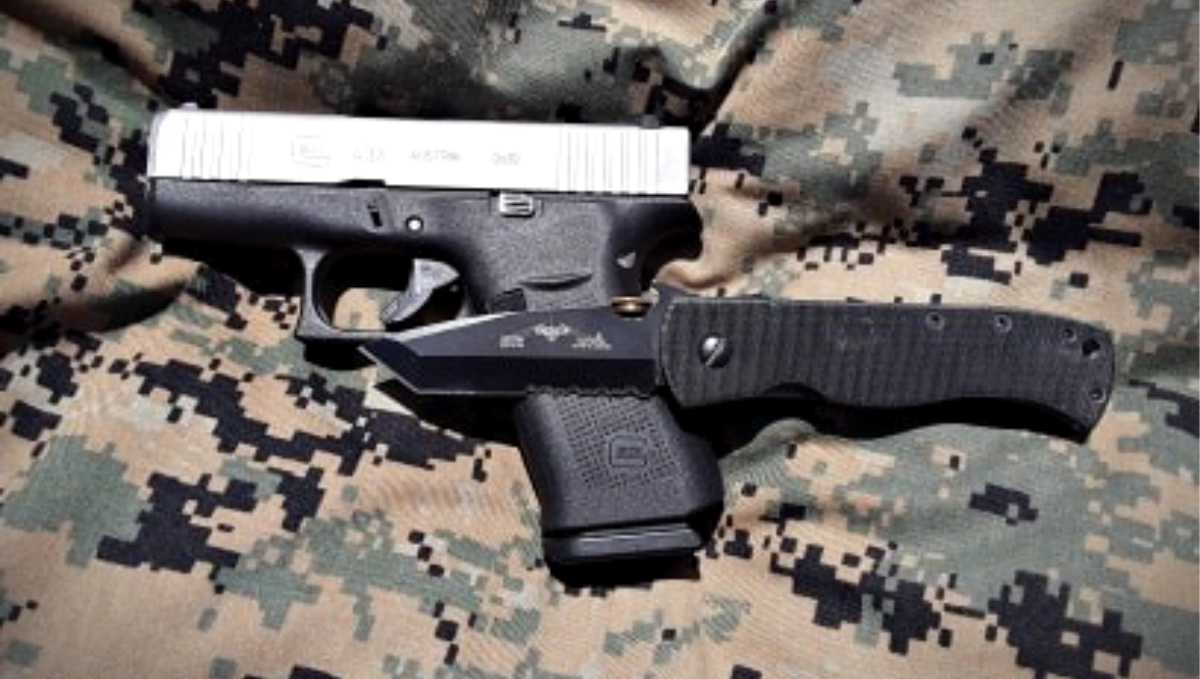 Many years ago, Ernest Emerson developed the CQC-6 for the Navy’s SEAL Team 6 when they approached him to make knives for them. And verily, they were well pleased with his work.

Fast forward a few years to 1994. Mr. Emerson and Benchmade collaborated on a knife for the masses because he did not want the CQC-6 (CQC stands for Close Quarters Battle) to become a production knife; he vowed that it would remain a custom knife. The collaboration was intended to come up with something similar to the CQC-6, but different enough in its own right so the masses could enjoy this knife.

Thus was born the CQC-7, which is considered by many to be the Father of all tactical knives. It was the beginning of a new genre in folding knives that has continued and blossomed into the market we have today.

For several years, Benchmade produced the CQC-7 and it gained a following. Eventually, Mr. Emerson started up his own production company and decided to produce the CQC-7 (and others) in his factory. In 1999, the first CQC-7s began flowing from Emerson Knives, Inc. (EKI). 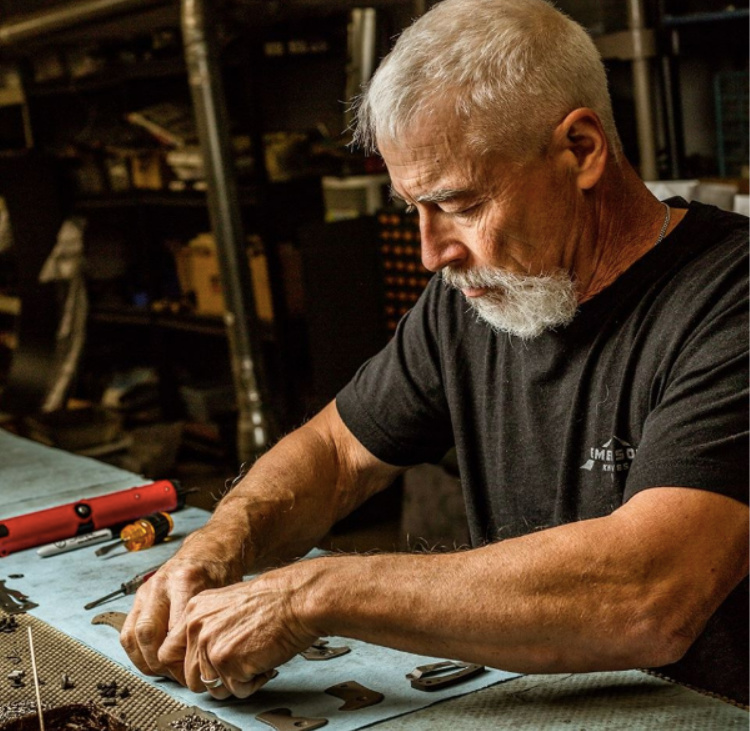 “I’d rather stand alone for what’s right – Than with many who are wrong.”- Ernest Emerson. Image source: Emerson Knives.

The CQC-7 Has a Robust Following

The list of people who carry and use them is so vast that there’s no way to come close to listing them all, but they include all branches of the military, especially Special Operations. One of the SEALs who was on the raid to kill Bin Laden carried a 7, and that knife was auctioned off for a princely sum of money, the proceeds of which went to benefit Special Operations. Army Rangers, Special Forces, Air Force Combat Controllers, law enforcement officers and special team members, firefighters…the list never ends!

Since then, many models at EKI have followed the “7”, but it has always maintained a devoted following. Let’s take a look at why this is.

A Serrated Blade is an Important Part of Your EDC

Serrations, or “teeth”, add versatility to a blade.

The CQC-7BTS has the black coating (BT) and serrations (S), which are also referred to as “teeth” in the knife community. Mr. Emerson himself said that you should always be carrying at least one serrated knife at all times because the ability of serrations to cut things, such as seat belts, is unmatched. Serrations will keep cutting long after they have dulled. And, despite what people claim, serrations are not hard to keep screaming sharp.

Here’s a little trick I’ve learned to keep them in tip-top shape: Take a leather shoelace and wrap one end around the tip of your shoe. Wrap the other end around your hand and pull it tight so that the lace is taut. Then take each serration of your knife and strop it along the length of the leather lace several times. Some folks even put sharpening compound on the lace to give it more effect. This process results in serrations that are scary sharp, the key being to not let them get too dull, to begin with. 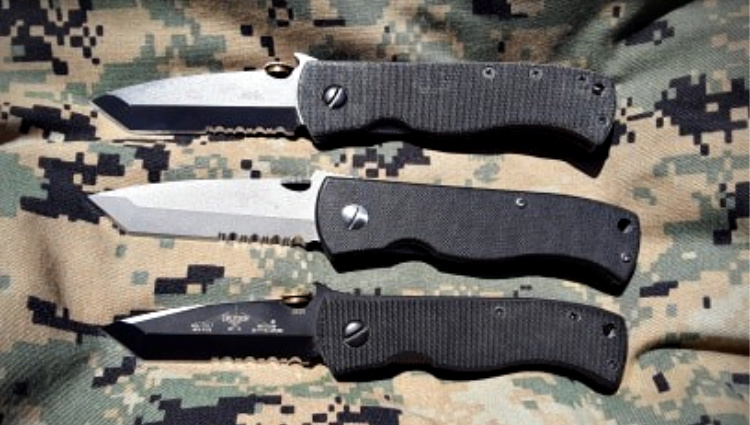 Two full-size CQC-7 Emersons on top and one Mini CQC-7 on bottom.

The 7 has a blade length of 3.3 inches. If you’ve chosen the tanto version (B), there are two cutting edges: the main edge and the tip edge of the tanto. The key to sharpening both of these chisel ground edges is to sharpen them each separately.

Why a tanto? Because it pierces extremely well. And those two edges actually provide more edge surface than a spearpoint of the same blade length. I used to think that a tanto shaped blade would not lend itself well to everyday cutting chores, but I was quite mistaken! The more I carry the 7 (every day for years), the more that I find the tanto configuration to be great for cutting everything I’ve ever encountered. Plus, it’s excellent for scraping jobs such as scraping decals off of windows. The 7 slices very well in addition to stabbing.

There is also a spearpoint version (the A model). All CQC-7s come in two finishes currently: the black (BT) and the Stonewashed (SW) version. To mix it up even further, there is a Mini version of the 7, which can be had in either finish, and in either blade configuration. Still not satisfied? Well, you can also have it Super-sized! The blade on the Super version is ½-inch longer than the standard 7. The blade length of the Mini is 1/2-inch shorter than the standard version. Got all of that?

I’ve found the Mini-7 to be extremely handy, though it’s a bit shorter than I’d personally like to use as a weapon. Even the standard 7’s 3.3-inch blade is about what I’d consider being a minimum for self-defense. Personally, I consider all of my knives to not only be tools, but also potential defensive weapons in the event I have to defend my family.

Full size 7 on bottom and a Mini-7 on top. The difference in blade size is apparent.

The 7 carries very discreetly, and when in the pocket, just about disappears. It’s very light, too, around 4 ounces. It just tucks away until it’s needed. The sum of the 7 adds up to more than its parts, in that it just seems to outperform its size! The liner lock is made from Titanium, with the non-locking liner side being stainless steel. The washers are Nytralon, so there is no possibility that they will corrode if exposed to saltwater, and they are self-lubricating. 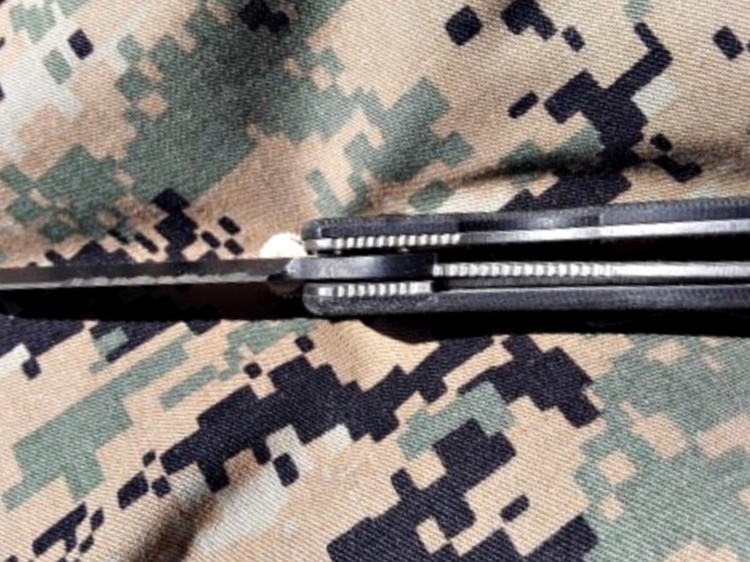 The CQC-7 utilizes a Titanium liner lock, which is very secure.

In the hand, the knife feels incredibly solid. The G-10 handle scales offer excellent purchase, and there’s little chance of the knife slipping. Even in cold weather, the G-10 remains somewhat warm, as opposed to knives with metal handles, which seem to absorb cold so easily.

Speaking of the handle, it is perhaps the biggest marvel of the whole knife. It is curved just enough to give the user’s fingers something to grip around, but at the same time, it’s not so grooved that people find it irritating. When gripped, it just sort of melts into the hand and stays there. This is not surprising because Emerson is known for his ergonomic handles. 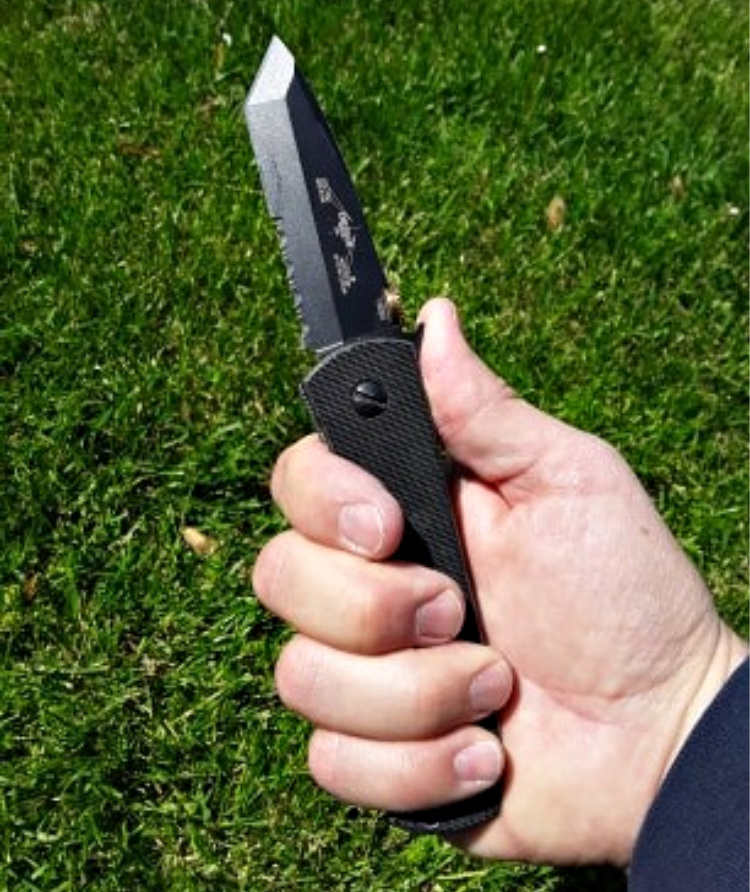 The 7 has a very secure, comfortable grip in the hand.

The blade steel is 154 CM, stainless steel. It’s not the latest, greatest super steel, but it’s a solid choice that is easy to sharpen and resists chipping. The 7 is available with or without the Wave Feature, which is patented by EKI. It is the hook that you can see above the thumb ramp. When the knife is pulled from the pocket, that hook snags on the edge of the pocket, deploying the knife as it is drawn. The blade deploys faster than a switchblade! If the user does not desire the blade deploying so quickly, he can simply hold his fingers over the spine of the blade and it will not deploy.

All in all, the 7 is still just as iconic and useful as the day the first one rolled off the assembly line. Real deal operators use it after all these years and will continue to do so for decades to come. I feel it’s a classic that will never die out.