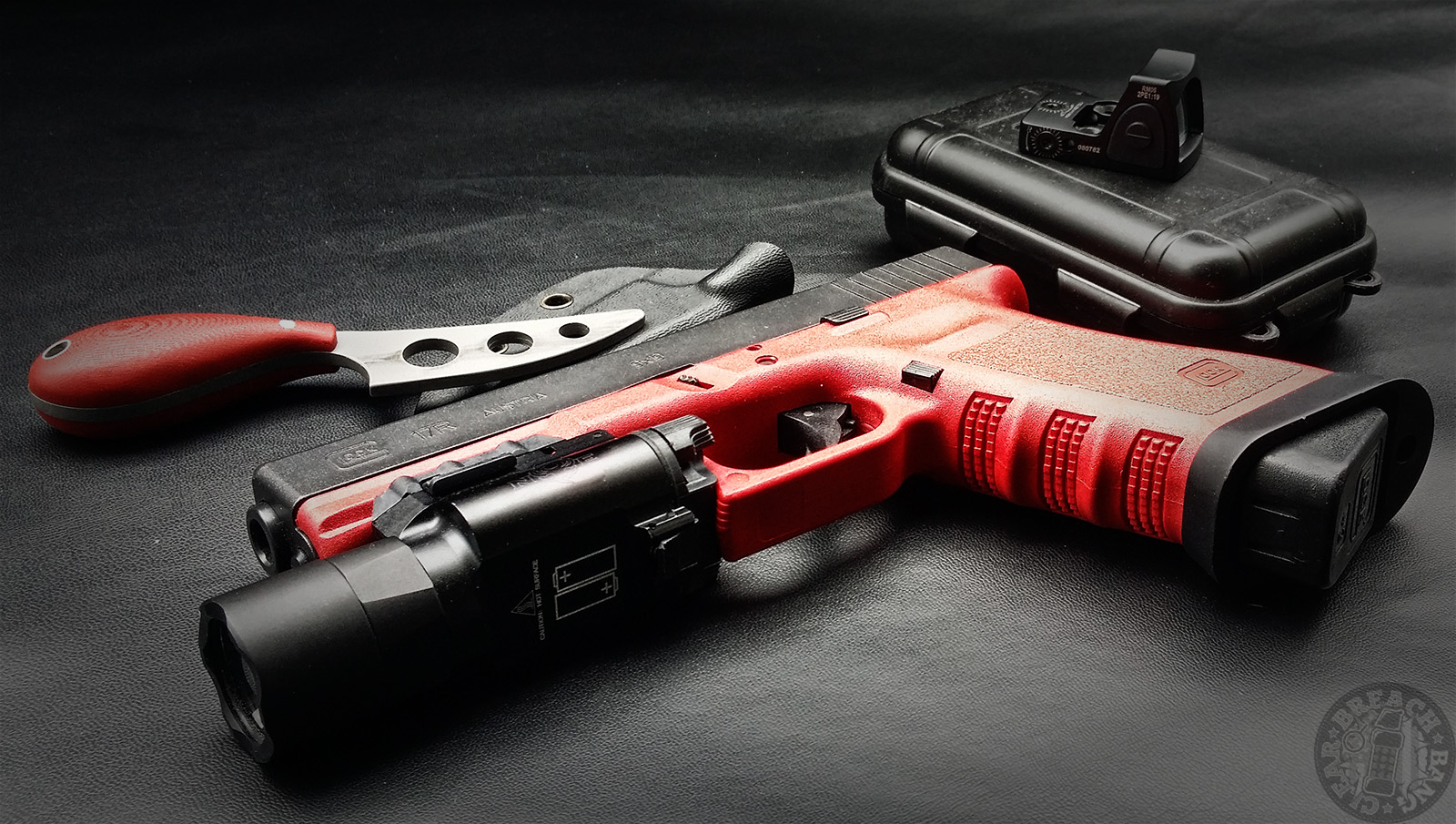 Today’s guest post comes to us from Samuel Hayes. You may recall his previous guest post about Sudden Shooter Events. Today is about practice pistols. Read up.

I’ve never really been a “gear whore” or “Gun Gadgets Guy” when it comes to spending money on firearms and self-defense items. I lean more towards the conservative and practical side, only buying what I need and will use instead of “safe queens” or “collector’s items”. And the gun that gets the most use is my Glock 17R practice pistol.

The 17R has proven to be one of the best purchases I’ve made and gets plenty of time as my personal training tool when I’m dry firing at home or in the gym. It also spends a considerable amount of time in my holster when I’m teaching, as I’m a huge proponent of performing demos. Because of its capabilities, I find it a far more useful training tool than a SIRT pistol (itself certainly not a bad tool, particularly for dry-firing). But the 17R is superior because it’s a fully functional Glock in every way except for being incapable of being fired. Recently it’s taken on a new role, which I will get to in a second. 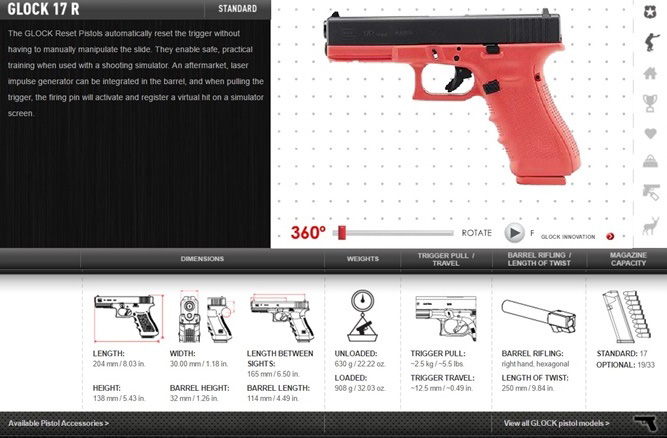 The “R” in 17R stands for “reset”. This particular model is configured to allow the trigger to be pressed repeatedly without having to manipulate the slide. For realistic dry-fire practice, this feature is outstanding. I can practice engaging multiple targets or simply engaging a single target with multiple “rounds”.

The trigger press when I initially got it was horrible. It felt nothing like a functional live fire Glock trigger, and wouldn’t reset quickly or reliably enough to get successive trigger presses. After attending the Glock advanced armorer course, I tinkered with it and replaced a spring with one from the New York trigger. Not only did it solve the trigger reset issue, but this minor modification had an unintended benefit of making the trigger heavier, as NY triggers are intended to do. The benefit to my training is that the heavier trigger forces me to work through the press and ensure that it’s clean and flinch free.

As an instructor tool at Caliber Training Group, the obvious benefit is the safety aspect of this being a non-firing, yet fully functional gun. I can demo all of the fundamentals, as well as malfunction clearances, fully non-compliant weapon, disarms and deflections, etc., where I would not be able to do so with a SIRT or a Blue gun. I could have opted for a yellow training barrel, but I prefer a dedicated training pistol that’s obviously non-lethal.

My courses are very specific to dealing with violent critical incidents in an urban environment. This usually means “close quarters”, and this is where this tool really shines. I know this may be where some people lose their shit, but here it is…In my classes, when I do demos I sometimes let people point this gun at me and I point it at them [*shudder*]. I am of the belief that in order for a training evolution to be as realistic as possible, folks need to see the business end of the barrel and they need to point guns at live human beings (cue “safety whining”). This is NEVER, EVER, EVER done, with anything other than a blue gun or this training pistol. Before I do it with the training pistol, I give a brief explanation of how the gun functions, I pass it down the line for every student to handle and inspect so that they can see it is a non-functioning firearm, then I ask if anyone would still be uncomfortable having this gun pointed at them or pointing it at me. Anyone who says “yes“, I don’t use them to demo…simple.

A new use for my 17R came with my discovery, like many others probably reading this, of the soul-stealing skull puncher known as the “Roland Special“, an RDS-equipped combat pistol named after a real-life SpecOps legend. I had long considered adding a red dot optic to my EDC but was not completely sold on its practicality or usefulness. In the not-too-distant past, I could easily shoot a ping pong ball suspended from a string or sitting atop a target stand at 25 – 40 yards. Well, as much as I hate to admit it, my eyes are not what they were back then. My first experience with an RDS was engaging a 12” square steel plate at 75 and 100 yards with a Glock 17 back in 2010 and I remember thinking, “This would be a good tool for folks with bad eyesight to make pistol shots beyond 25 yards“. Now, I’m slowly becoming that guy.

Still not wanting to spend in upwards of $400+ on an RMR, I got the idea to seek out an Airsoft knock-off RMR for my 17R practice pistol. I figured that would give me an opportunity to incorporate it into my dry-fire training and really get a feel for whether I’d like it before committing to the real deal. I found this Chinese knockoff online for $50 and also managed to find a Surefire X300U clone on the same site for $64  (Raven makes a holster for that btw.)

They’re both fully functioning like the originals. In fact, the RMR is so indistinguishable from the real thing that I’ve challenged a number of people to identify the real deal in a side by side comparison and no one has been able to easily do so. The X300 clone puts out 80 lumens, nothing close to the original, but for practice use, it’s more than enough (especially considering how quickly a real X300 eats through batteries). The RMR also has a bright red dot and is fully adjustable for windage and elevation. Best $114 I’ve spent on training gear in a long time.

I was about to send the slide off to be cut until I saw the new RDS sight mounts released by Raven Concealment and Dueck Defense. So now, my 17R has become an experimental accessory platform in addition to its other uses.

Now, here’s the part that sucks for most people. The 17R is sold exclusively through Glocks LE blue label program, usually on special order only. It’s not usually a stock item and it runs at about $470 blue label pricing. I’ve seen them out in the wild on Gun Broker and eBay, but the price tag in those places has been in the absurd range of $800 – $1000. I still plan on buying one or two more, as I am more than happy with the product and the flexibility it gives me as a shooter and trainer.

Stay safe, do the work, be hard to kill. 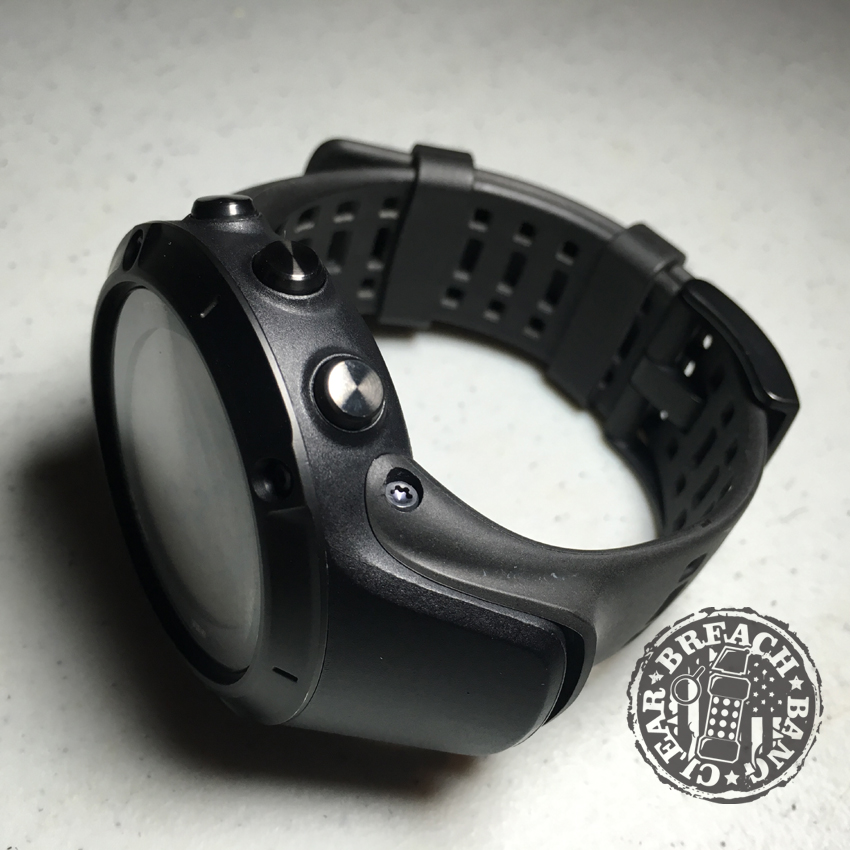 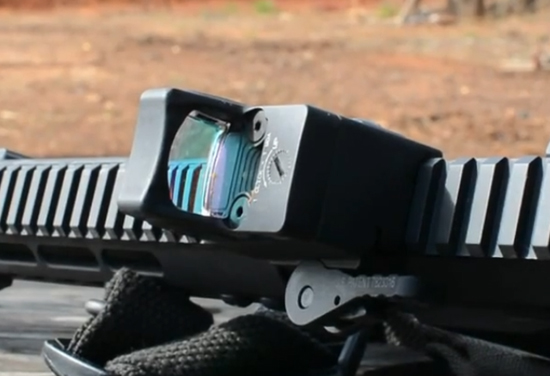 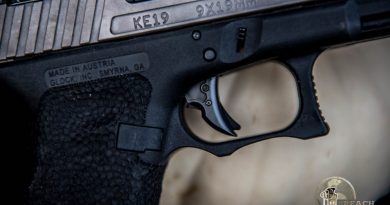