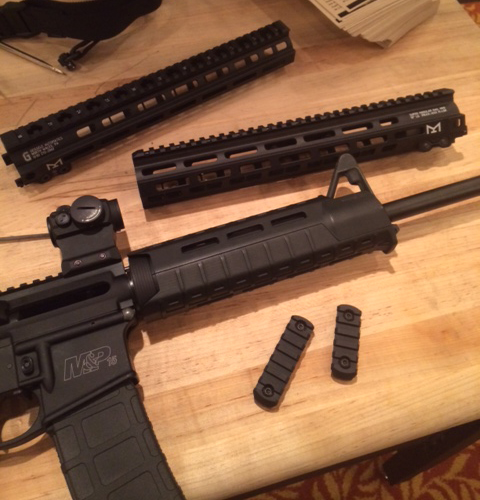 Magpul recently released its MLOK rail system – you have probably already heard that. You may have wondered why the market needed yet another mounting system – we certainly did. As in, what are the differences between KeyMod vs MLOK? Well, stand by. We are going to tell you why so many of us here at Breach-Bang-Clear think it’s ingenious.

Does the Industry Need Another Mounting System?

Magpul has been increasingly expanding their product line ever since the “original Magpul” came out in 1999. The company recently announced its intention to pursue a modular accessory locking system dubbed “M-LOK” and it is encouraging other manufacturers to get on board with the design. After initially viewing the press release for the MLOK rail, we were confused as to why the market needs a new mounting system. After all, there are already many options. There is the legacy military system (Picatinny) rail, KeyMod, and assorted other forearms that use simple holes and slots of various dimensions (including Magpul’s own MOE polymer line) to mount accessories.

It seems like every week a new free-float forearm is hitting the market, with everyone taking their own crack at what is “ideal”. Unfortunately, not all of those handguards, or the accessories that attach to them, maintain compatibility with each other. The KeyMod system has come close, but still suffers from several issues and can have operator errors caused by improper assembly. Seeing a void in this market, Magpul set out to create a superior, affordable, and lightweight system that is as rugged as it is foolproof. After speaking with Magpul’s bearded beauty Beau Hickman at SOFIC, and having him break the MLOK rail system down for us Barney style, we are convinced.

It’s undeniable that it’s going to be the wave that sweeps over the firearms industry and changes everything. Here is why. 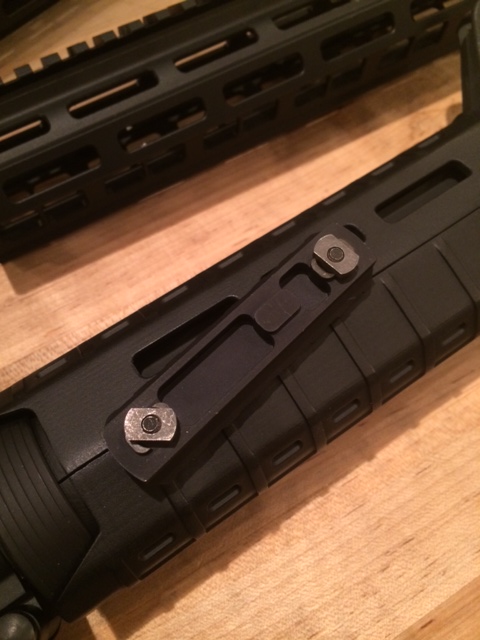 The MIL-STD-1913 Picatinny rail feels like a lunchbox, turns into a waffle iron when the gun gets hot, has plenty of sharp edges, and is heavy, but it has the advantage of being standardized in much of the world.

The MIL-STD-1913 Picatinny rail was the first attempt at a modular, user-adjustable system for optics and accessories. At the time (this was the early 1990s) it was the best option. You can see the similarity between Pic and weaver style rails. The downside was the amount of machining that goes into the system, as well as weight, bulk, and cost. The long and short? It feels like a lunchbox, turns into a waffle iron when the gun gets hot, has plenty of sharp edges, and is heavy. The plus is that it’s pretty much “world standard” now and there are plenty of manufacturers that make great quality forearms as well as accessories. Regardless, it is a dated system. The important thing to remember is it was created as a means to attach optics to weapons while retaining zero. It just happened to expand and evolve into a means of attaching vertical grips, bipods, and flashlights as a natural form of progression. 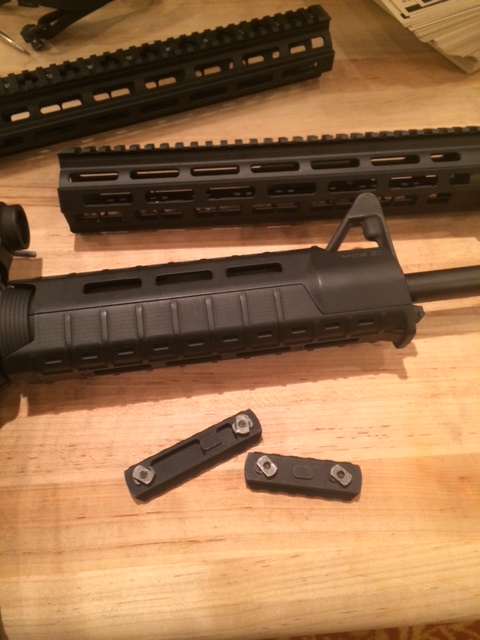 We will skip over the “holes and slots” systems that were first utilized by bolt-on accessories for M16 oval handguards, as well as early competition-style free-float forearms. There are so many styles and dimensions there are whole companies existing just to produce compatible parts (think Impact Weapon Components and the like). The next step in the right direction to be created was the KeyMod system, first popping up only a few years ago. The KeyMod system is immediately recognizable by its industrial shelving style keyhole, the kind you see utilized at the Home Depot, Lowes, and big-box stores.

The KeyMod interface system was created by VLTOR and popularized by several premier rifle builders like Noveske. It is an open-source design that is much more streamlined and lightweight in comparison to Picatinny rails, but still requires a large amount of machining to create the perfect teardrop-shaped “key” that accessories must lock into. There are more companies producing KeyMod accessories as time goes on, and it is growing in popularity. With the lighter weight and a more ergonomic feel (vs. Picatinny rails), its growing fan base is understandable.

Some Issues with Pic Rail and KeyMod vs MLOK

The downside? Some companies are producing Keymod compatible forearms that are too light and are fragile in comparison to the Pic rails. Machine time affects cost just as it does with the Pic rail, and accessories can fall off if the user doesn’t properly install the accessory. Adding to this issue is the tendency of some manufacturers to deviate from the original specifications. This is actually still an ongoing problem with some Picatinny rails now twenty years later. 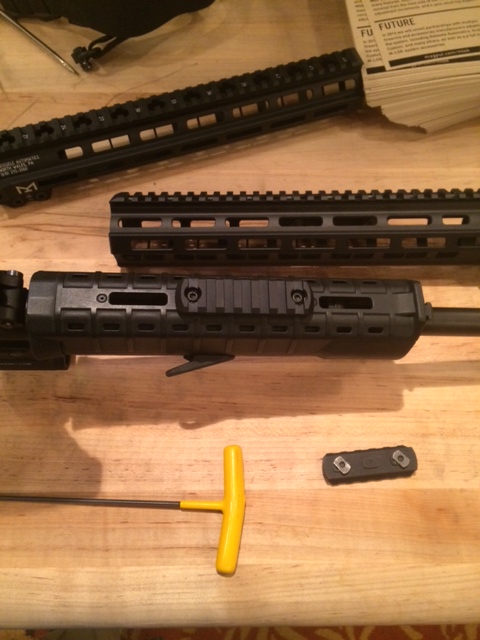 The MLOK rail system is an evolution of its simple, reliable MOE slot system. By increasing the size of the slots found on MOE polymer hand guards and squaring off the ends, Magpul has created an amazingly effective system for accessory attachment — and from the looks of it, it’s a superior one. The direct-mount capability relies more on the accessory than on the forearm. As long as you make a forearm that has the properly sized slots (which is much quicker and more simple to manufacture), you can enjoy quick changeability of accessories through the MLOK cam action built into the accessory itself. There is no need to access the backside of the rail, it is multidirectional (you cannot put anything on “wrong”) and is as equally effective on metal as it is on polymer handguards.

The T-nut is self-aligning, strong, and easy to use. The T-nut plate is the key, not only because of how cheap and easy it is to make, but also because it cams and locks on its own as you turn the Allen wrench.  For obvious reasons, the MLOK is open-source. Magpul is encouraging manufacturers to embrace the simplicity and versatility of the design, which is the main advantage.  This just makes good business sense. There are already numerous aftermarket part manufacturers gearing up to produce accessories for the MLOK rail; Geissele Automatics and  Kreb’s Custom are just two, with the list growing daily. With the design’s 4-axis recoil mitigation, backward compatibility with existing MOE sized slots and robust simplicity, it’s hard to imagine this not soon becoming the new industry standard.

Do these things mean other mounting systems are in all ways inferior? Not at all; Pic rails remain ubiquitous and preferred by many, and several of our minions are big fans of Keymod. In a KeyMod vs MLOK discussion, though, MLOK’s advantages are significant and compelling enough that you should review it as an option before making any future purchases. Honestly, it’s so amazingly simple, it’s hard to imagine that it has taken this long to be thought up and brought to fruition. We are excited to see this system first hand and fully comprehend how much of a landmark change it’s going to be.

Check it out for yourself, and stay posted for our updates on this revolutionary means of tricking out your favorite Blaster.

Read more Breach-Bang-Clear articles about other Magpul products and reviews. 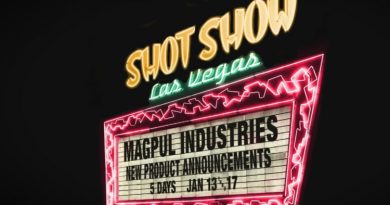 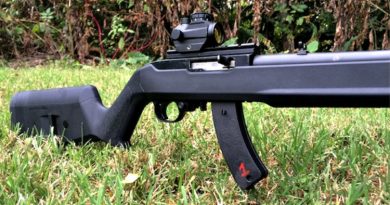 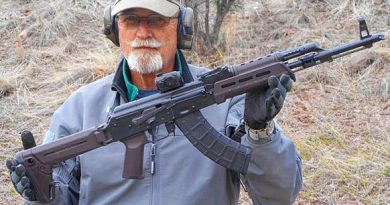 2 thoughts on “The MLOK Revolution Is Coming”