Ruger American Predator: all about the rifle 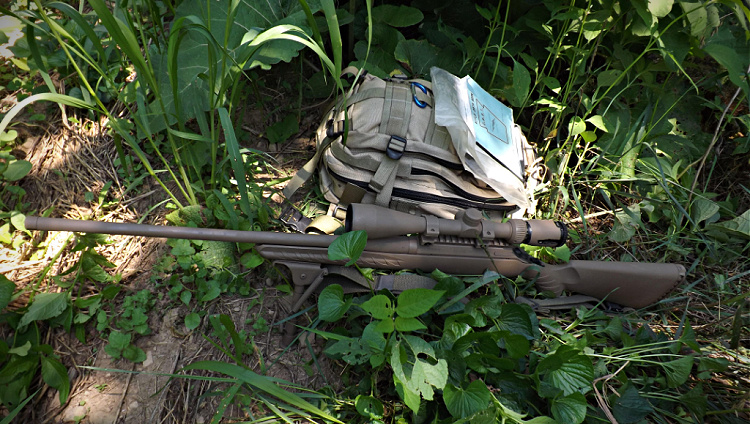 I was perusing the shelves at my favorite local gun shop (the Handgunner in Topton, PA) when I saw a bolt action on the shelf, a Ruger American Predator rifle. Randy, the owner, saw me fondling it and said, “It has a confirmed kill.”

“Huh?”, I said, perplexed. “I took a deer with it at 175 yards. One confirmed kill”, he elaborated. I had to chuckle. He asked if I wanted to see the target that he shot with it, so I said sure. The target he produced had an extremely tight group, and I told him so. The group was under an inch. He really grabbed my attention when he mentioned that he had fired that group at 200 yards!

We discussed price, as he reduced the selling price, considering that the rifle had been used. To me, that was a plus because it was already sighted in. This rifle also came with a scope, and he was asking $549 for the entire package, which I thought was pretty reasonable.

I was a former sniper, though, and snipers mainly use one type of rifle: the Remington 700. The vast majority of the US sniper community worships the Remington 700, they are geared for that rifle.

Still, this Ruger was calling out to me. And I was a former sniper, after all, and not married to the 700. And didn’t several of my friends sing praises to Ruger rifles, swearing by them? I knew of Ruger’s good reputation, and even own a Ruger 10/22 myself. Maybe it was time for me to expand my horizons and consider other precision rifles.

I left the shop empty-handed, resolving to try to finagle a way to land that rifle. A week later, I stopped by to see if he still had it. When I asked Randy, he said, “Nope! You’re too late!” I wasn’t surprised, it was too good a deal to pass up.

I mostly forgot about the rifle, but was still yearning for a bolt action rifle in my inventory. Christmas morning, my wife presented me with the rifle, much to my surprise! I was a happy camper. Yes, my wife is awesome!

Introduced in 2016, this rifle features a 22-inch barrel that is not quite heavy, I’d call it a medium weight, and is cold-hammer forged. The end of the barrel is threaded and comes with a threat protector. The factory states that the rifle delivers a minute of angle accuracy, but they lie; it is even more accurate than that! 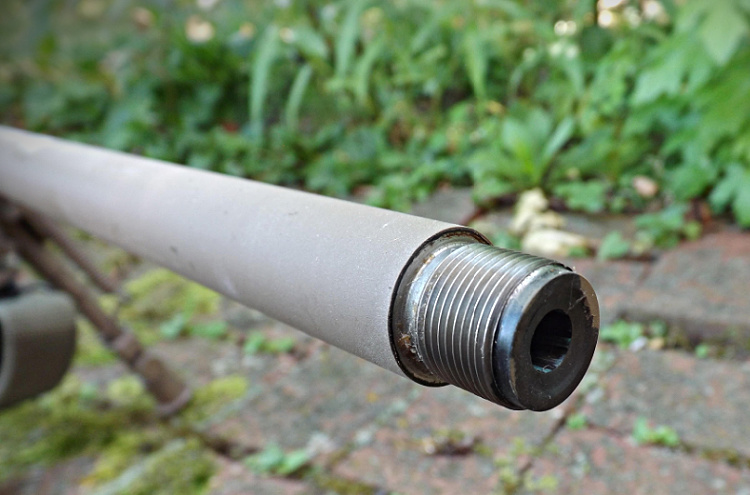 The threaded muzzle, without the muzzle cap, which makes attaching sound suppressors and muzzle brakes a breeze.

The safety is tang mounted and is convenient to manipulate. On top of the receiver, there is a one-piece Picatinny rail that is super convenient for mounting optics. The three-lug bolt features a 70-degree throw and a satisfyingly smooth action. I like that Ruger utilized the three-lug bolt that Mauser pioneered. 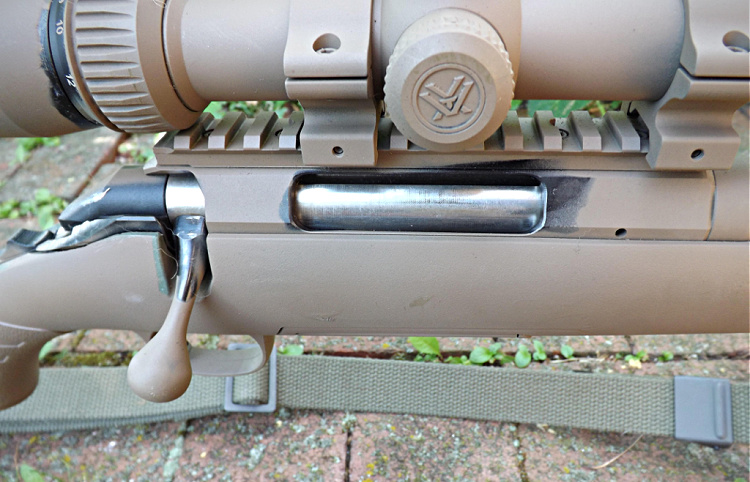 The bolt handle is large enough to manipulate quickly, and the action of this rifle is pleasingly smooth. The one-piece Picatinny Rail is visible in this shot too

The moss-green stock is synthetic and fairly lightweight and seems to draw quite a bit of criticism from many rifle aficionados, but I am not sure why. It free-floats the barrel well enough and I’ve not found a flaw in its function. The complaint I’ve heard the most is that people say it looks “cheap.” Well, this rifle is intended to be economical for the consumer, while delivering exceptional accuracy. Spoiler alert: Ruger succeeded! We’ll get to the accuracy later. The base rifle weighs 6.6 pounds, which is fairly lightweight. The metal surfaces wear a dark matte finish that will not reflect light, which is a nice touch. 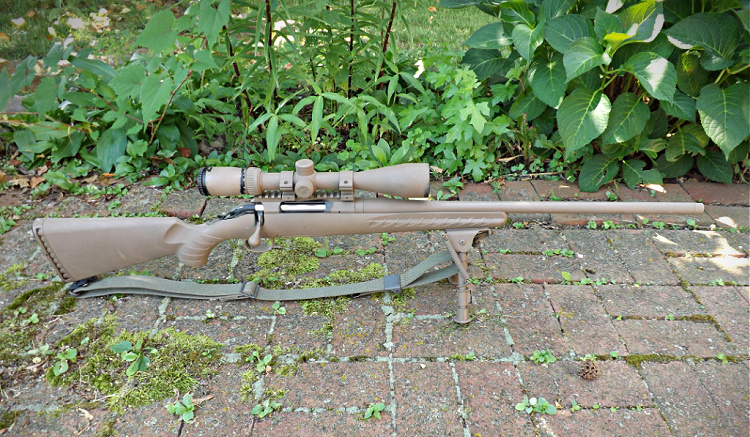 This Ruger American Predator wears a paint job in Coyote Brown, helping it blend better with the environment.

There is an adjustable trigger that can be set in the three to five-pound range. I left mine at the factory setting because it is an excellent trigger; light and crisp. It works great for me, and if it’s not broken, I don’t fix it.

The rotary magazine holds four rounds and is detachable. Nothing really to get excited about, it functions as designed and feeds ammunition efficiently. When inserted into the receiver, it fits flush. 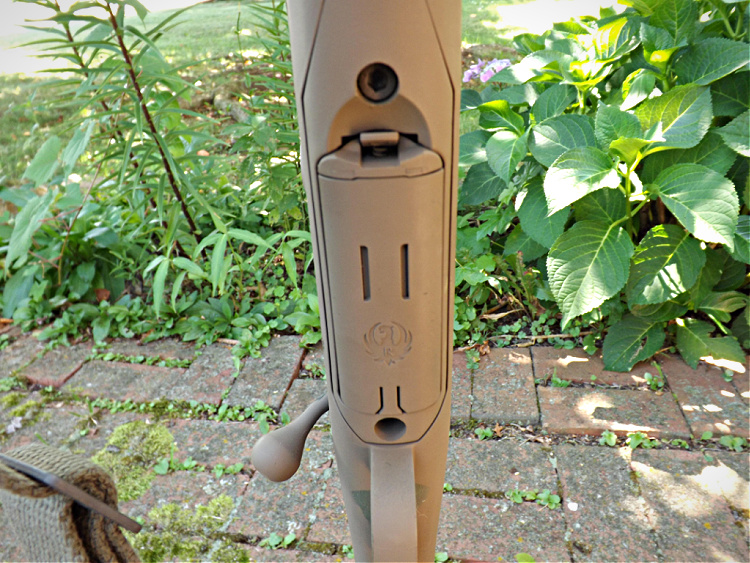 The magazine fits flush with the bottom of the receiver and is easily removed via the magazine release at the top. 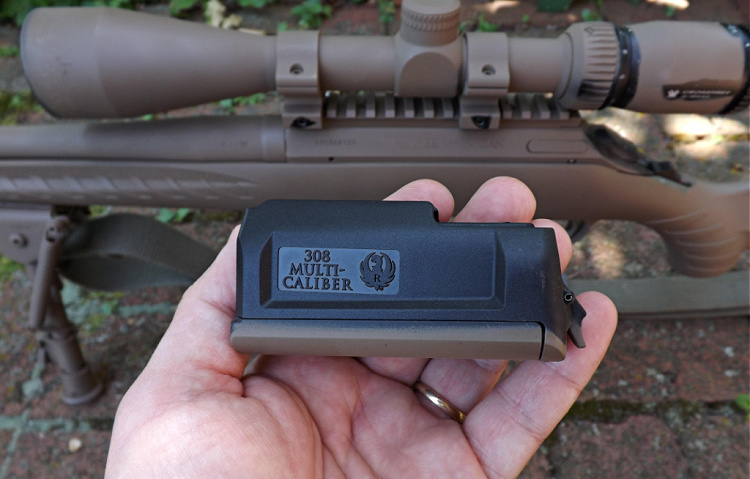 The rotary magazine that comes with the rifle that apparently works with multiple calibers. Feeding with the 6.5 Creedmoor is flawless.

My Choice of Cartridge

A bit about the caliber that I chose, which happens to be 6.5 Creedmoor. This caliber was introduced by Hornady in 2007 and it has caught on in a huge way with shooters. The cartridge is based on the .30 TC. It is 6.5x48mm. This cartridge has gained popularity with competition shooters as well as hunters for a few reasons.

It is inherently accurate at long ranges, which the cartridge was expressly built for from its inception. This is easily a 1,000-yard cartridge, and some shooters are even hitting targets at the mile mark with it. Incidentally, many are using the Ruger American Predator rifle with this cartridge to hit those targets one mile distant.

Another huge advantage of shooting the 6.5 Creedmoor is the lack of recoil. I had heard that it was a soft shooter, but even after hearing people rave about how pleasant it is to shoot, I was still surprised when I touched off the first round. The recoil is not sharp at all, and very pleasant.

During the sniper schools I’ve attended, we fired thousands of rounds of .308. Firing the .308, mostly from the prone position, was not one of my life’s greatest joys, and the recoil of it really dug into my shoulder. By the end of a day, the old shoulder would not be happy with me. Not so with the 6.5 Creedmoor at all; it is a world of difference. Less recoil also means that the crosshairs don’t move as far off target and that they return to the target more quickly.

Ammunition for most major manufacturers is available and in a wide variety of bullet weights. In my personal inventory, I have bullets in the 125, 129, and 140-grain weights, and there are many other options out there. This caliber retains more energy than the .308 at longer distances and has a high ballistic coefficient, which means it flies through the air extremely efficiently.

Experienced hunters have been using the 6.5 Creedmoor on every game animal in North America up to and including elk with success. Naturally, to be effective on such large game, precise shot placement is paramount, and the 6.5 delivers exactly that. Hog and coyote hunters have been especially excited about this round, as it suits their needs, particularly for long-range coyote hunting.

The American Predator came with a scope as a package. It was topped with the Vortex Crossfire II 4-12x44mm scope, which is made from a solid piece of aircraft-grade aluminum. The scope is waterproof, fog-proof, and shockproof. The reticle is duplex and has holdover and windage hash marks for the shooter to use as aiming points.

The Vortex Crossfire II 4-12x scope performs very well, offering a bright, clear picture and plenty of magnification. The tang-mounted safety is visible at far right and is situated for easy manipulation.

I wasn’t expecting a lot out of the scope, as it’s not a high-dollar item, being moderately priced. So far, I’ve been pleased with its performance. It has held zero well and has target-style knobs, so scope settings for various ranges can be recorded. The scope’s clarity is also surprisingly good; I used it to check out a tree line across the fields behind my house that was at least 2,000 yards away. Set at 12x, I could make out many details on trees and the landscape. At the 1,000 yard mark, it definitely would be good to go for engaging targets of all sorts.

I’ve always been a fan of Leupold optics, as that is what my duty rifles all wore, but the Vortex will serve well until (if I should decide to) I replace it with a higher quality scope.

Where to buy Vortex Optics.

I added a bipod to my rifle, set up similarly to how my sniper rifle had been set up; attached to the front sling swivel, with the legs forward under the barrel when folded. Then I added sling swivels and one of my favorite slings, the type used on the M-1 and M-14 rifle, a canvas type. There are more modern, more complicated slings out there, but the old M-1 sling is simple and I’m very familiar with it.

As mentioned, the first round was a pleasant surprise, given the modest recoil. Another pleasant surprise was the accuracy. I didn’t bother shooting at 100 yards for the first outing since the previous owner had sighted this rifle at 200 yards, so I figured, why not just start at 200 and see how it performs. He advised me that the difference in impacts between 100 and 200 yards is negligible.

I was delighted with the results, with the tightest group coming in at 1 1/8 inches at 200 yards. Pretty darn good. What surprised me, even more, is the fact that the ammo I was using was Hornady American Whitetail 129-grain hunting ammunition. That’s right, it was standard hunting ammo, not match ammo! As such, this rifle shoots well under 1MOA, and is closer to ½ MOA, proving to be at least as accurate as the sniper rifle that I was issued when I was on the tactical unit. I have no doubt that the Federal Premium HPBT Match ammunition that I picked up will produce even tighter groups. 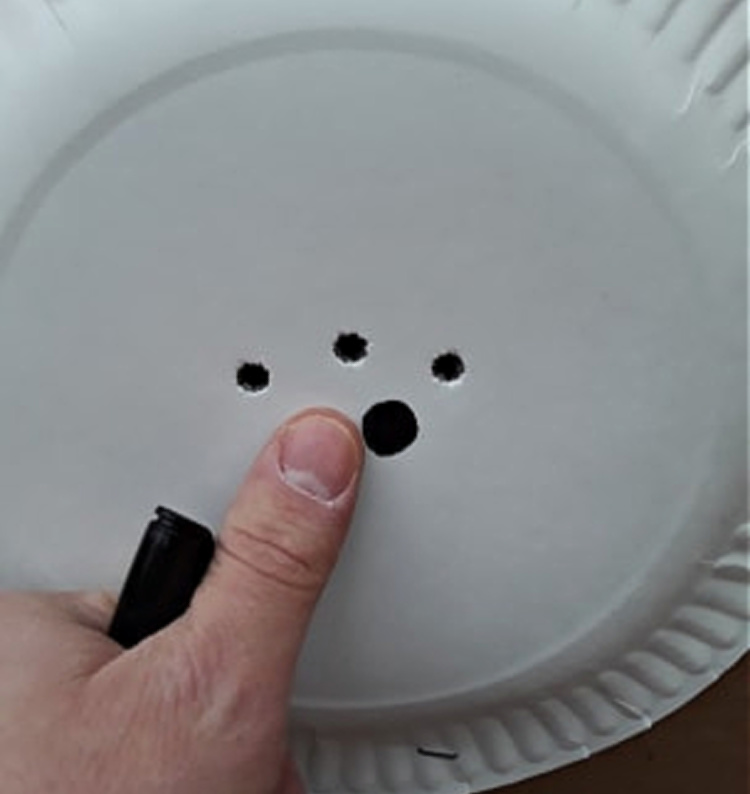 At 200 yards, the Predator turned in this 1 1/8-inch group with Hornady 129 grain American Whitetail hunting ammunition.

Unfortunately, my current shooting range’s longest rifle range only extends to 200 yards. I’d really love to see what this rifle can do at 800 to 1,000 yards. Given its performance so far, I know it will be a winner. A good friend who shoots long-distance regularly, tells me that the 6.5 Creedmoor really comes into its own past the 600-yard mark, where its performance eclipses that of the .308 Winchester.

A few decades ago, accuracy such as this would have been impossible without custom work done to the rifle and hand-loaded ammunition. Now, we are spoiled, in that we can pick off-the-shelf rifles and ammunition and enjoy such consistency an accuracy!

For the shooter who is looking for a long-range rifle and bullet combination that will not break the bank, the Ruger American Predator rifle and 6.5 Creedmoor will be just about impossible to beat. It will allow a shooter to comfortably engage targets at extended ranges using a tried and true, reliable action. Ruger is as American as apple pie, and their customer service is legendary for taking care of customers. I can’t wait to get mine to a longer range to test its potential!