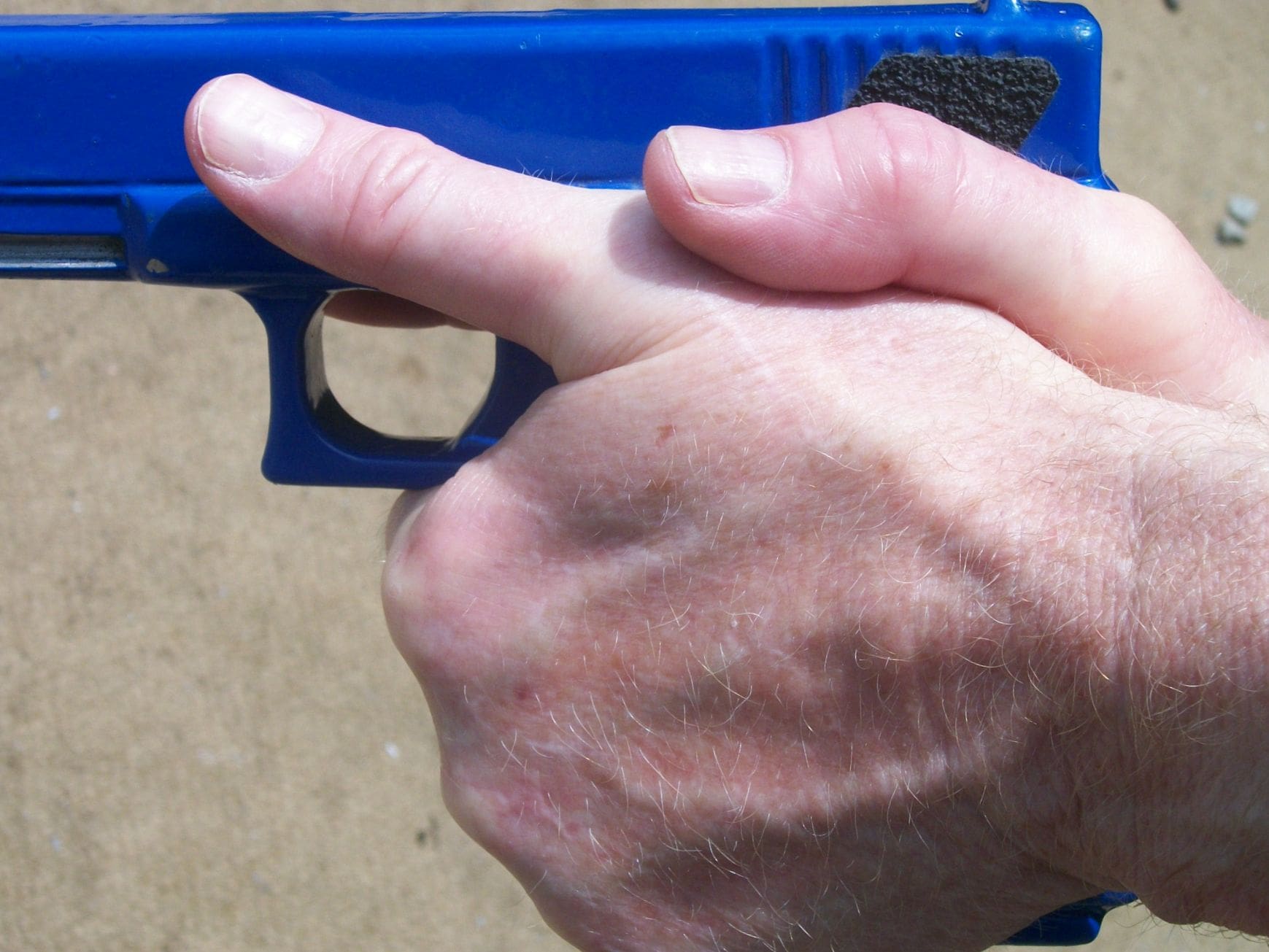 As my colleague Wayne Dobbs of Hardwired Tactical Shooting says, there are three fundamentals of handgun shooting that can make you or break you in a defensive situation; grip, sights, and trigger [manipulation]. I would also add followthrough, as a student who came back today from the elite Rogers Shooting School called to mention to me.

For this segment, let’s look at the autoloading pistol grip discussion contained in The Tactical Professor’s Pistol Practice Program. 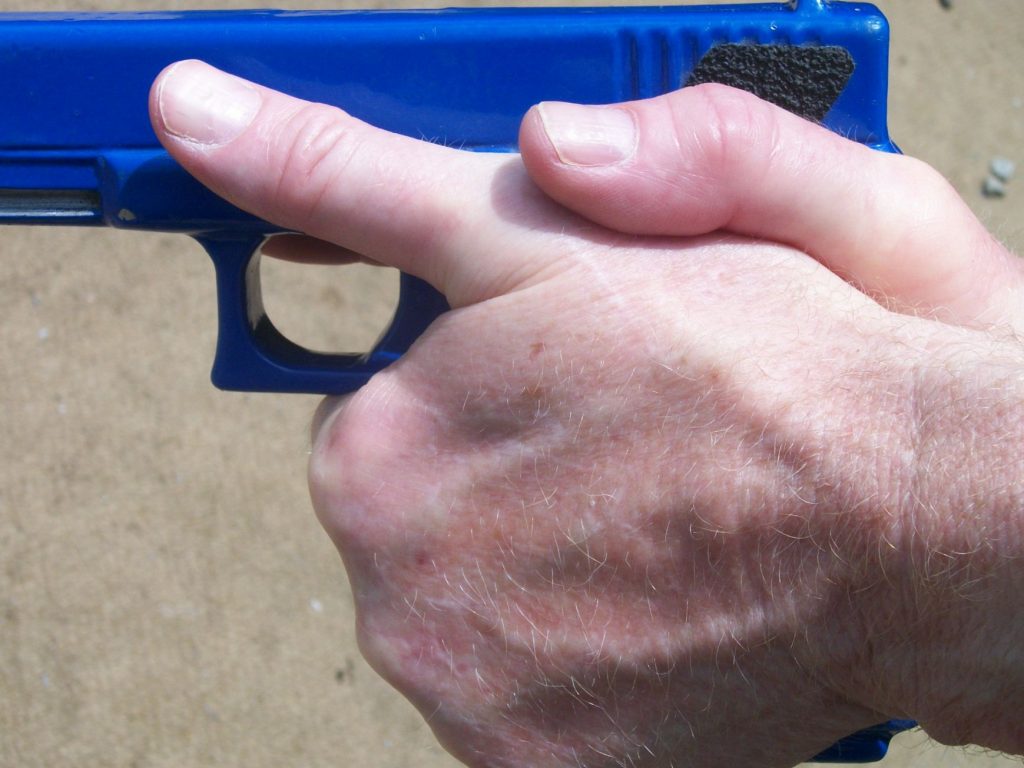 The proper grip for any handgun should accomplish several objectives:

After establishing the appropriate grip, a series of index points can be used to feel when the grip has been properly achieved. Especially in defensive encounters, there is no time for visually checking whether the proper grip is in place. Having a set of index points allows a shooter to establish a proper firing grip in the holster and during the drawstroke to know that the grip is as it should be.

With an autoloading pistol, this grip is commonly referred to as the ‘thumbs forward grip.’ Being aware of four specific index points will allow a shooter to know that a proper grip has been achieved without having to visually verify it. There are nuances to this grip that sometimes escape even experienced shooters, however. The first three index points are essentially the same for all shooters. The fourth index point may vary among shooters, dependent on individual physiology.

There is still debate as to how hard the fingers of the support hand should grip the firing hand. In any case, they should certainly grip firmly enough to not break free of the firing hand during recoil.

Web of the firing hand

The firing hand should be as high as possible on the back strap of the pistol. Gripping the pistol low increases the rotational torque of the pistol in the hand. So the first index point is the relationship between the tang of the pistol and the web of the hand. For most people, there should be no space between the tang and the web. The shape of a few people’s hands will leave a small space even when the gun is gripped as high as possible but this space should be minimal. Those with large hands may experience contact by the slide on the firing hand when it is held this high. The use of a beavertail or Grip Force Adapter on the Glock pistol can reduce this contact. 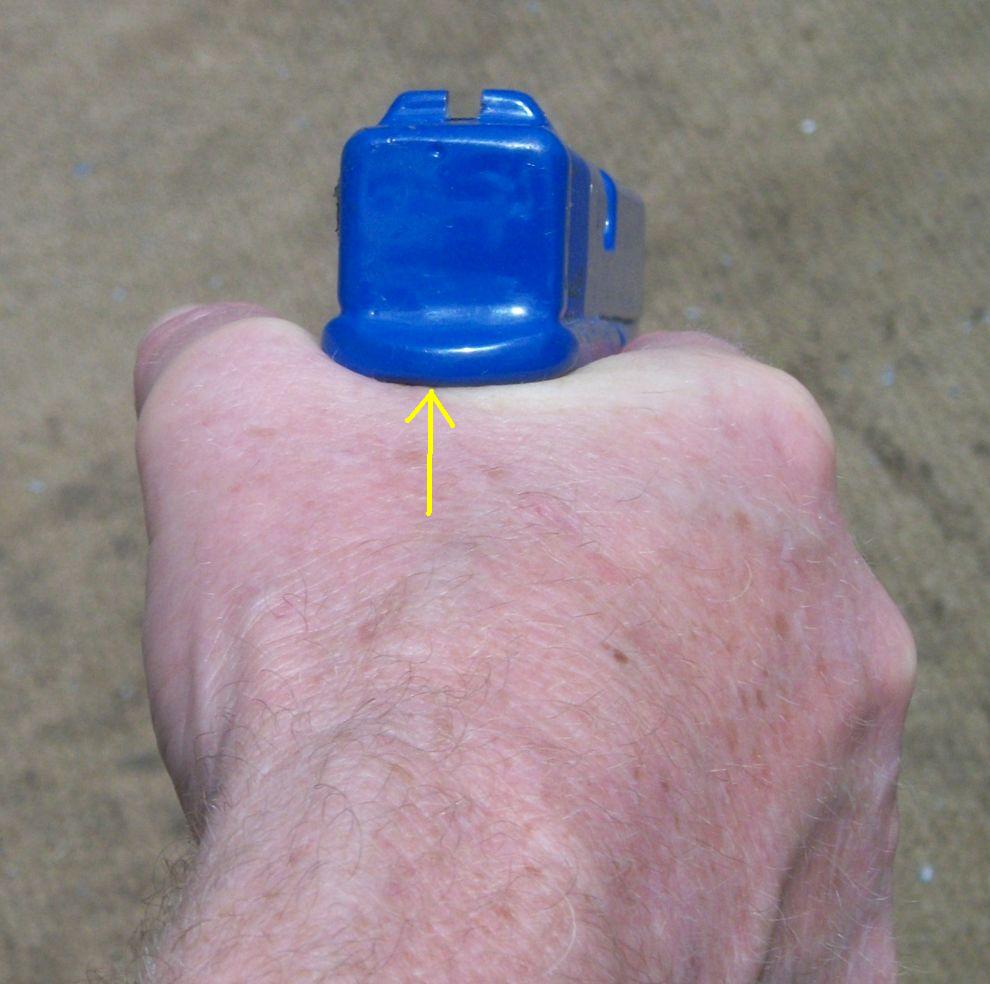 Bases of the thumbs mate 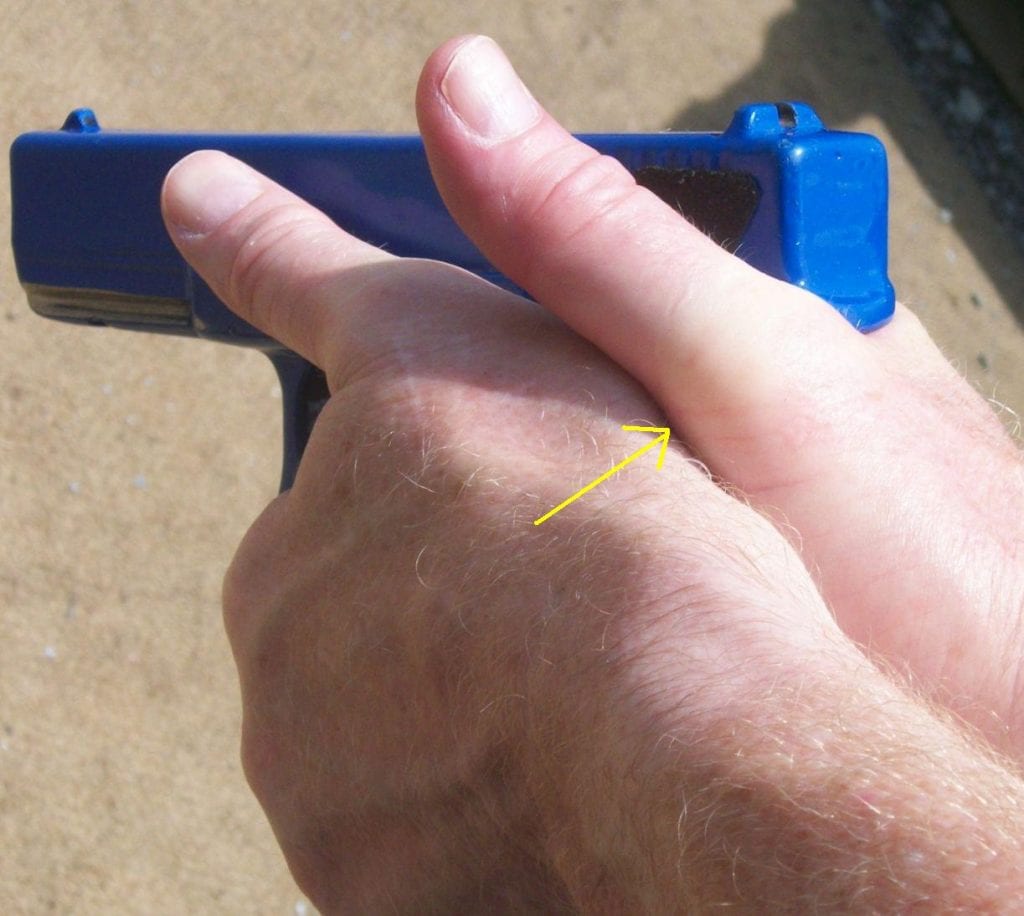 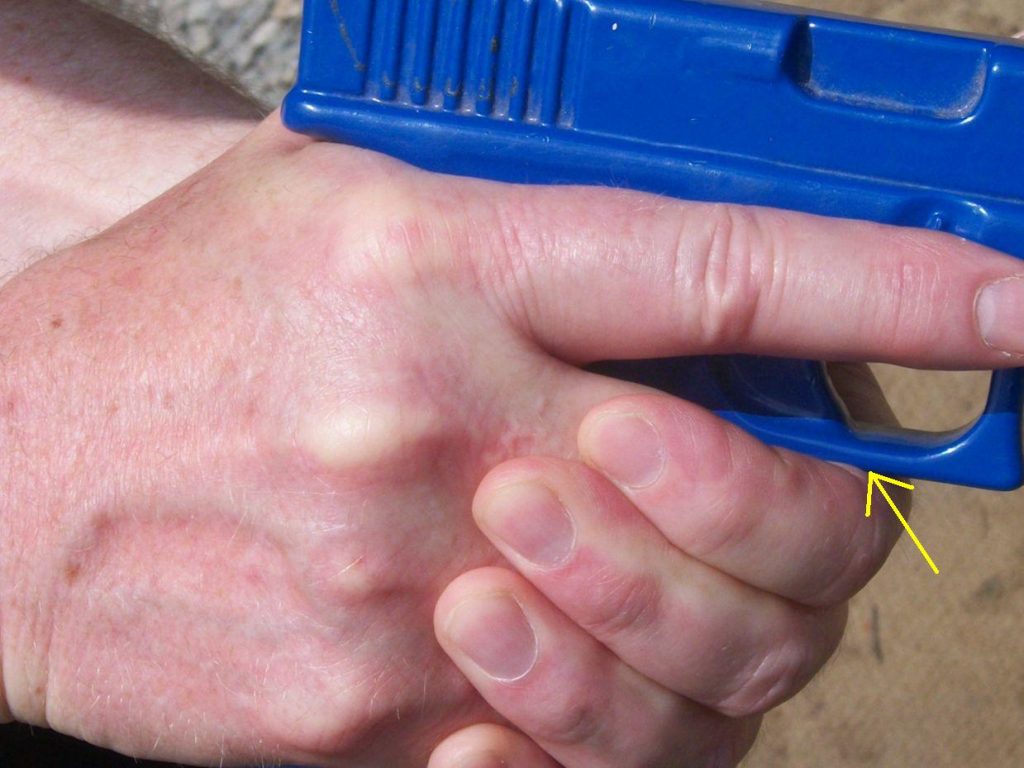 Stabilizing the support wrist is a key component of a proper grip to achieve recoil control. This is the element that many people do incorrectly when forming the grip. The wrist is most stable when it is extended downward. 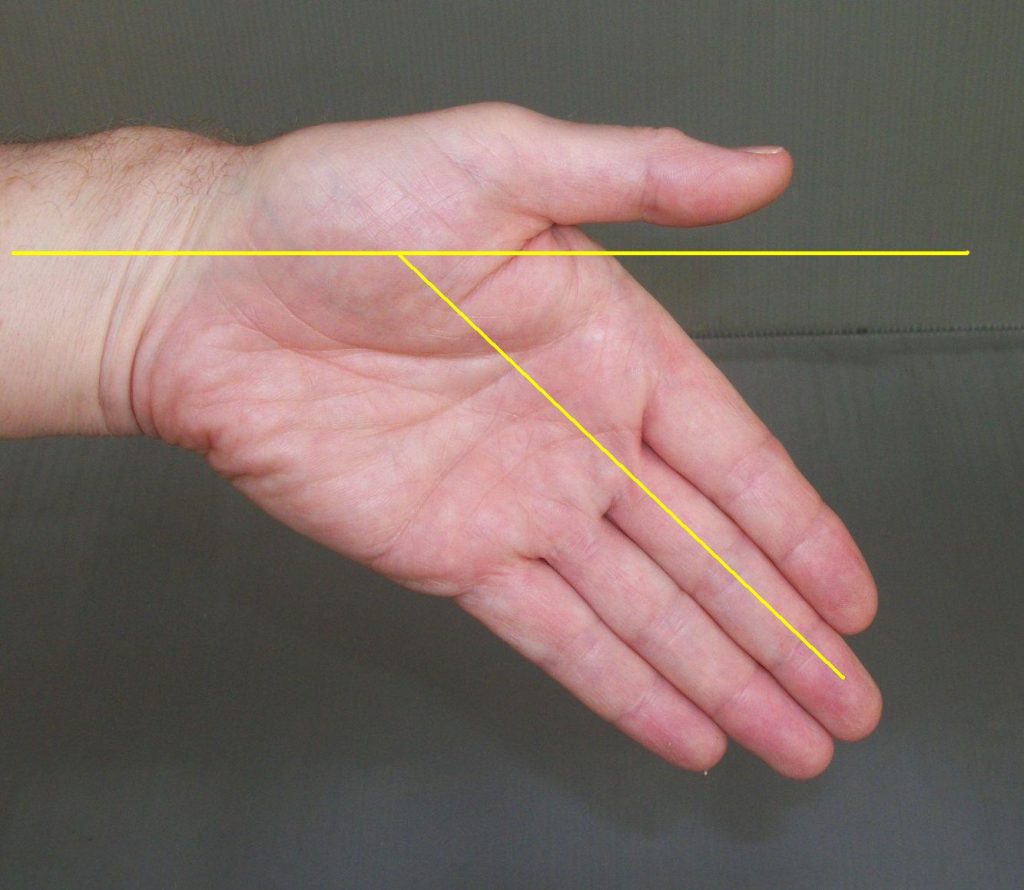 Angled downward in relation to bore

So when the support hand is applied to the pistol to form the grip, it should be angled downward in relation to the line of the pistol’s bore. 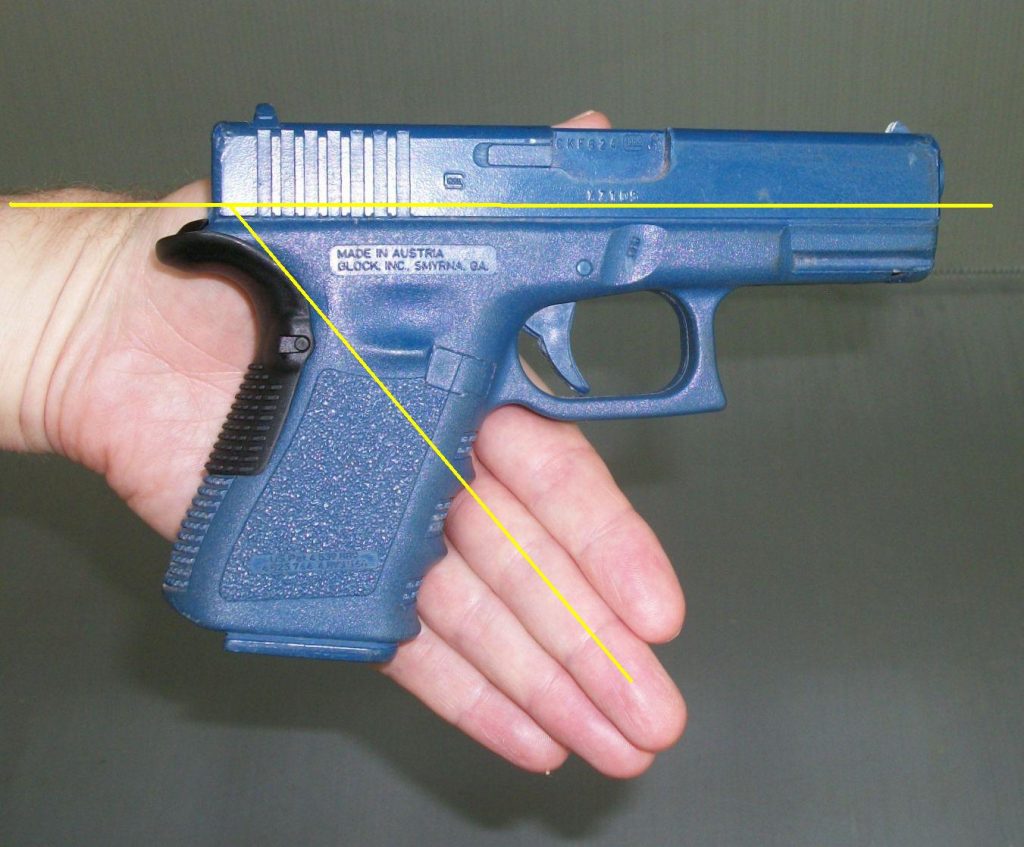 Wrist should not be straight

The downward extension is initially slightly uncomfortable and feels somewhat unnatural. As a result, shooters tend to unconsciously keep the wrist of the support hand straight instead of extending it downward. 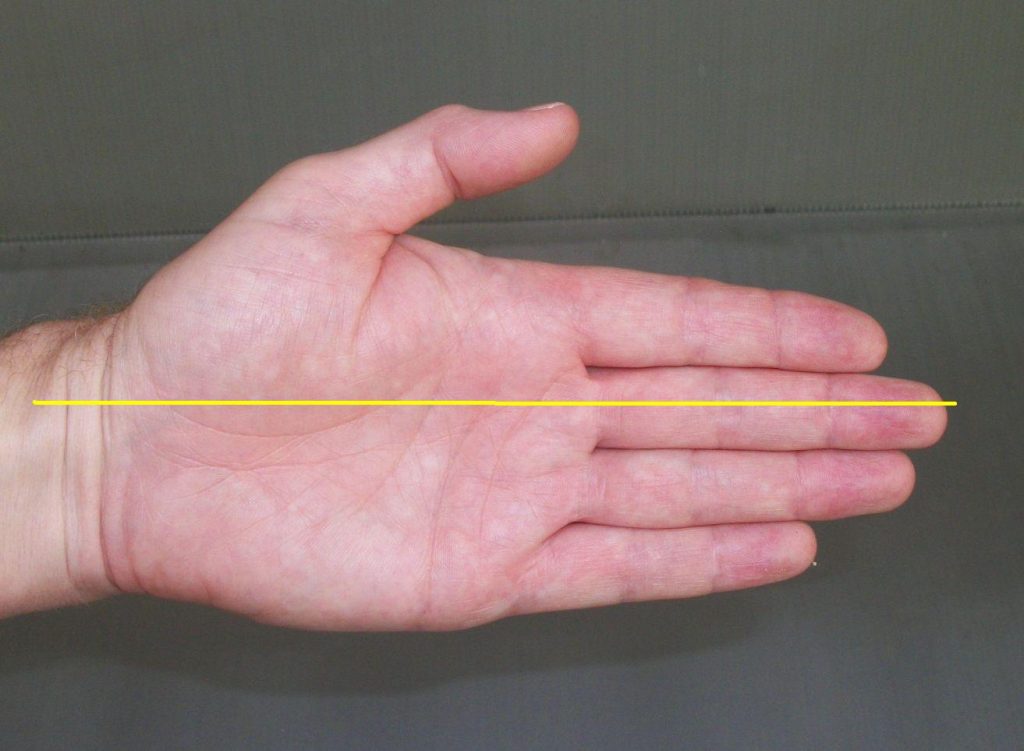 So, it is common to see the wrist held almost straight when the support hand is applied to form the grip. This is incorrect and does not provide much stability to the pistol when it fires. 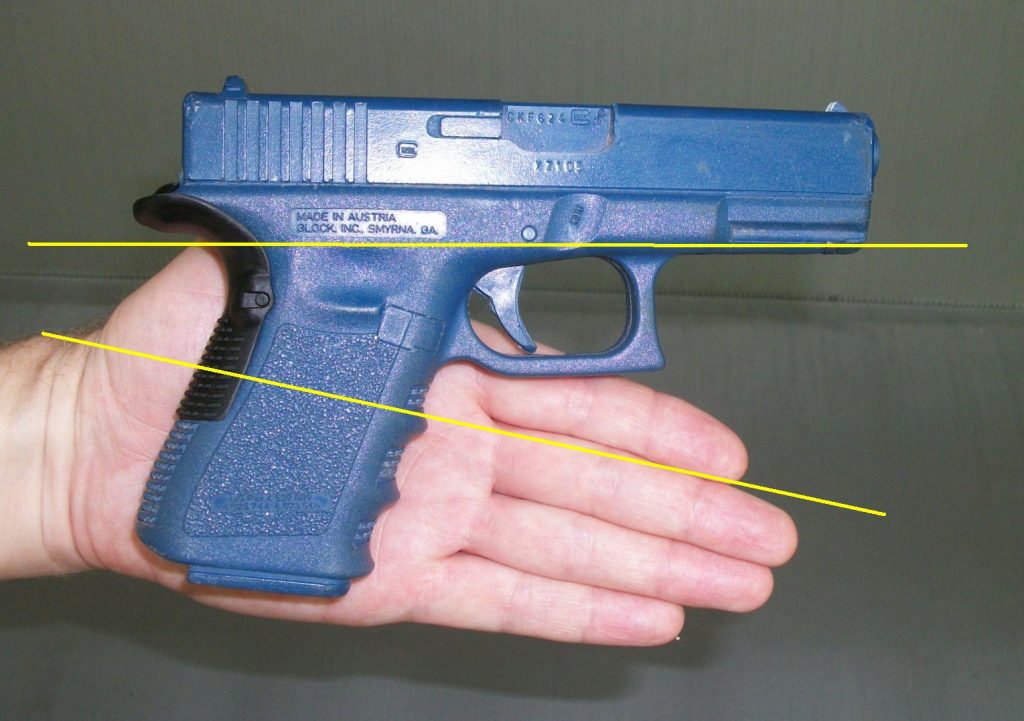 Consequently, the fourth index point is the contact point of the firing thumb on the support thumb. By knowing location of this point when the support wrist is properly extended downward, a shooter can immediately tell whether or not the best grip has been achieved. For most shooters, the tip of the firing hand thumb should be aligned in the area of the base knuckle of the support hand, rather than on top of the knuckle, as is commonly seen. The support hand thumb can either float free or lightly touch the frame of the pistol. It should NOT apply any significant sideways pressure to the pistol frame, as this can create a shift in the pistol’s point of impact. 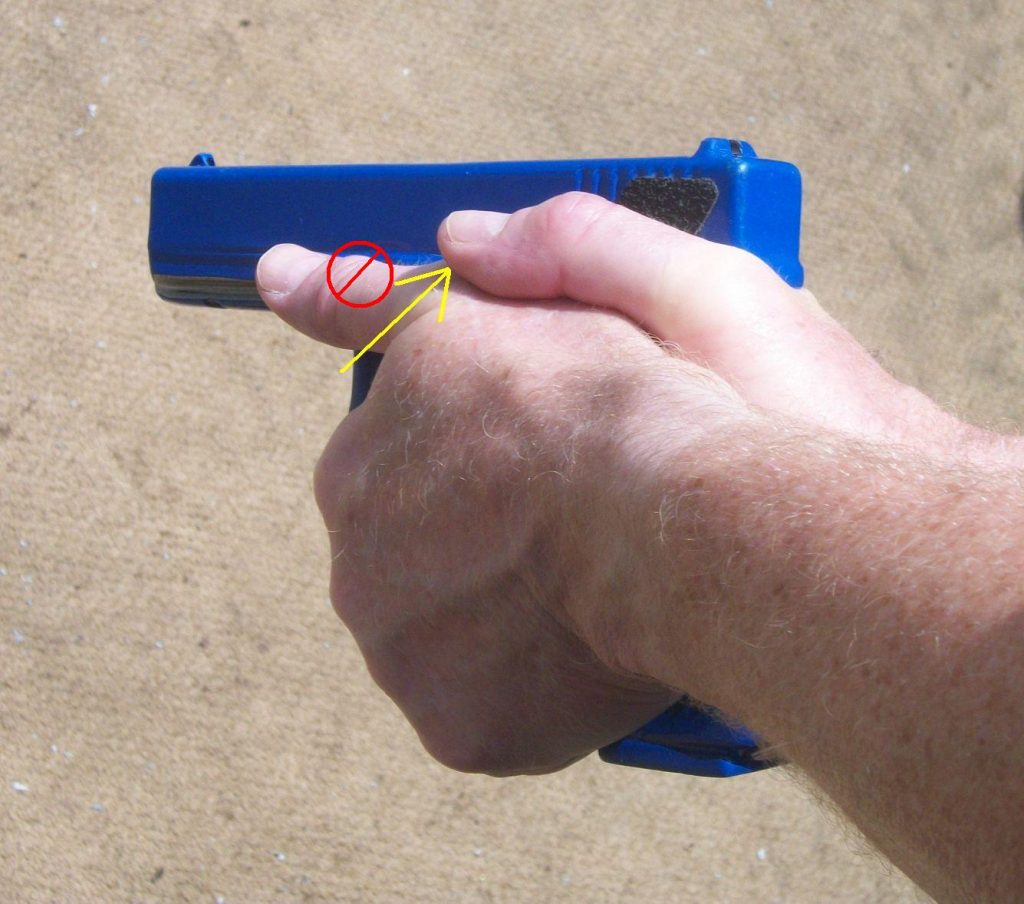 The fourth index point has two components. First, it verifies that the support wrist is extended downward. Second, it is located such that the firing hand thumb clears the slide stop to the maximum extent possible. 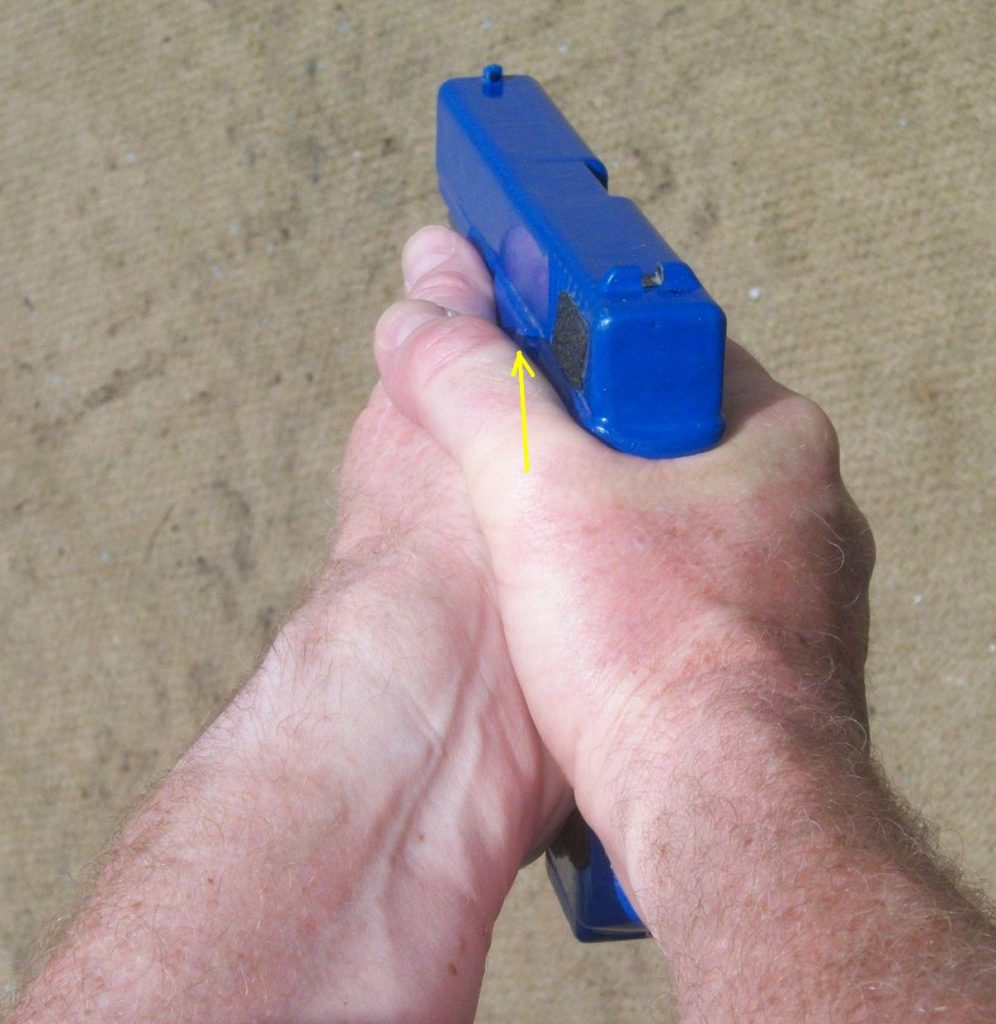 If the firing hand thumb is placed directly alongside the slide of the pistol, it’s easy for that thumb to prevent the slide stop from functioning. This will prevent the slide from locking back after the last shot fires. The subsequent click upon a firing attempt when the slide does not lock back can be either annoying or fatal, depending on circumstance.

In summary, the four index points of the proper grip on an autoloading pistol are: 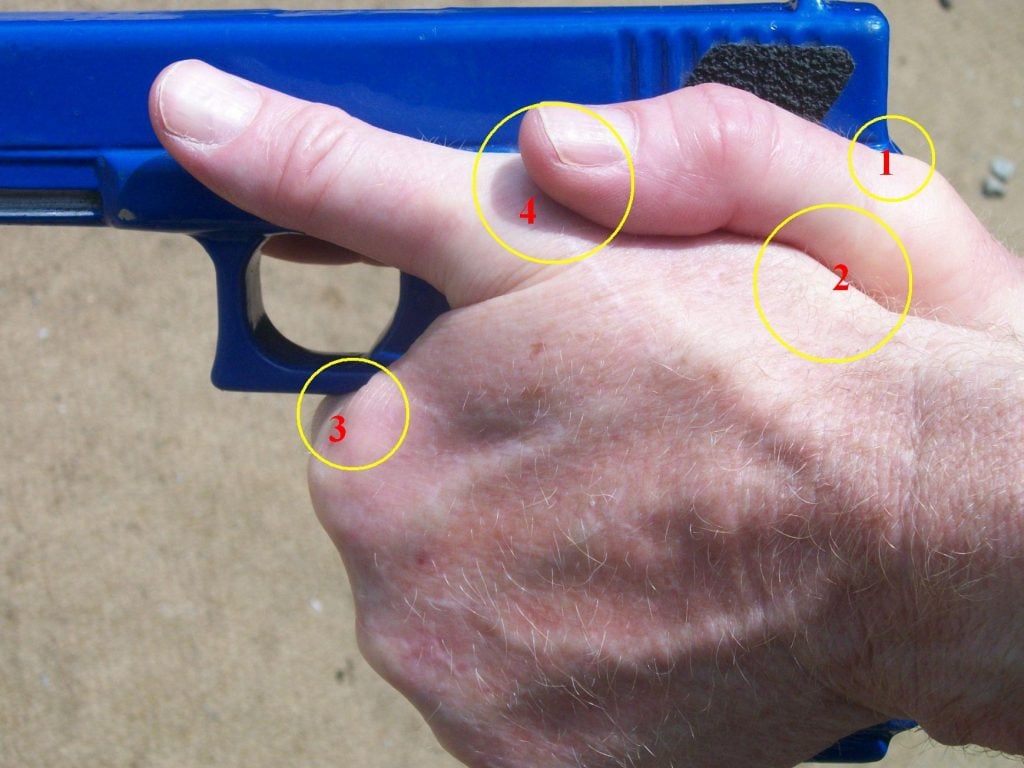 Developing a proper grip takes some effort and analysis but yields big dividends in terms of your shooting ability. Note that the issue of sights is important enough for me to cut a rear sight notch in my blue guns. I cannot abide a gun without functional sights, even when it is an inert gun. The sights discussion is for another time, however.

We hope you got something out of this article. If you’re looking for more fundamentals and critical thinking, visit the author’s home page at The Tactical Professor. While there take a few minutes to read through the Gunfights and Gunbattles section. Some great stuff in there.  you can also find him on Facebook, /ATLFirearms/.

A long, long time ago, a sagacious and scholarly fellow who understood the application of violence by virtue of various tools wrote a series of articles called Friday Fundamentals. It was a great series, but alas this Perspicacious Professor stopped writing them after a while. We’re reprinting them here, with permission, and to be honest we’re hoping to woo him into picking the series back up. You should read ’em all. 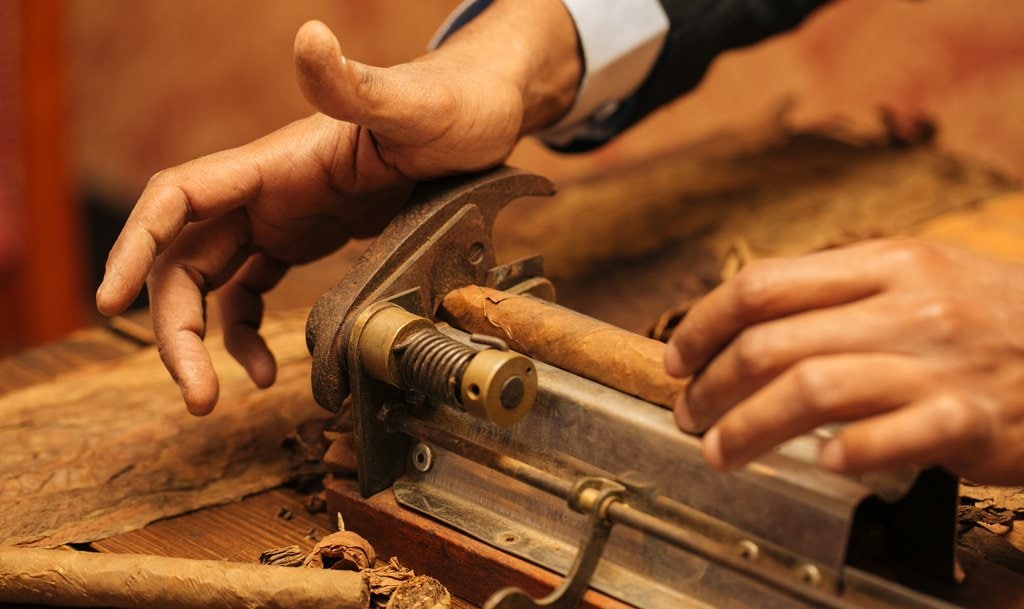 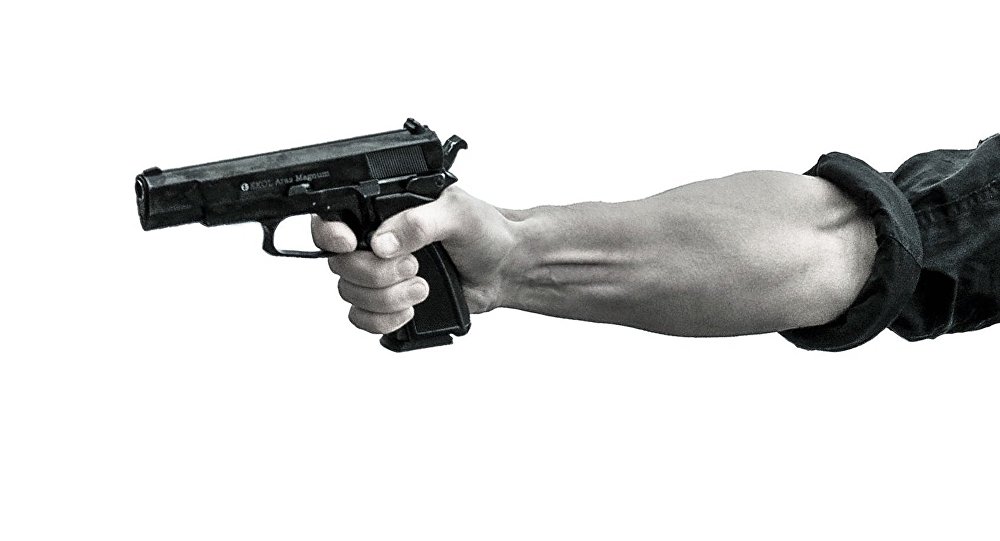 The Firearms Manifesto: Your First Gun