JTT: My Patrol Rifle and Me – 7 Things to Know

Brought to you today in its entirety by SureFire (@surefire_llc) – and all. those. lumens.

Me and My Patrol Rifle

The first time I ever broke out a rifle on a scene was a standoff with a murder suspect. He used a rifle to kill his neighbor on her front porch at a distance of sixty-plus yards. I spent the next three and a half hours watching his door through my iron sights. We got him with no additional casualties, and he was convicted and sentenced to life.

Since then I’ve always had a patrol rifle with me on duty. And I’ve learned a few lessons about equipping them, some pretty obvious, some only obvious after the fact.

Here are a few that might be helpful to you.

1. Plain old iron sights as a backup are a must. I can’t tell you how many cops and shooters I’ve seen trying to $$$ their way into being a better shooter without iron sights. A misty morning hunting a suspect on foot fogged up the outside of the lenses of my Aimpoint. I was really happy I could pull it off and go with irons that day.

2. Aimpoint rocks. I bought my comp M3 after that first incident where I couldn’t see my iron sights some of the time when covering the murderer’s door. I’ve tried other sights, but the Aimpoint allows me to keep my eyes on the threat and superimpose the dot. I have a slight astigmatism so the EOTech is a bit busy and distracting for me. The ability to keep eyes on the threat was part of why I didn’t shoot another suspect who had a gun. I was looking at him and could see his motions were not accessing a weapon. The lesson? Pick the optic that works best for you.

3. There is no substitute for bright. white. light. I used to run a 12 volt Surefire with a turbo head. Heard plenty of remarks about how I had more light than rifle, criticisms about the weight and how stupid it looked, warnings that I’d blind myself indoors, and assorted other commentary. None of those mattered when we took an armed man at forty yards. That light was more than welcome.

4. Have a good, simple good sling. I’ve done the single points, three points etc., but settled on a Vickers Blue Force Gear padded sling. Love it. Easy on easy off easy adjustment. If I drop the rifle it moves away from my pistol. I got a good whack in the knee from an experience with a single point in training.

5. Ears on standby. With quality reliable electronic hearing protection in the $50 range there is zero reason to deploy a long gun without it. My rule of thumb is, the ears belong to the rifle. Get a different set for your range bag. That set belongs to that rifle. Before you grab the rifle, grab the ears. Mine are Howard Leights. The local gunstore sells them to other officers and shooters as “Ears Like Jake’s.” Plus your second round will be as good as your first, and your teammates will still be able to hear. Whey? Because they will follow suit and buy a set for themselves. If you ever hear an AR-15 go off indoors unprotected you will understand.

6. Put a green laser on it. Not as an aiming device. As a communication device. A laser says, “You have no chance.” Look at how often painting a suspect with a red laser from a Taser gains compliance. So why not just a red laser? Well, for one the regular customers have learned red dot = Taser. This results in less, slower or lower levels of compliance. A green laser…in my experience, the guys on the receiving end will think it’s SEAL Team Six and Luke Skywalker working together. I’ve seen crazy, and I mean fruitbat crazy, people who’ve given us all sorts of problems instantly comply when painted green. Plus it’s easier to see, and even other officers understand that green is pure lethal force if you establish that fact ahead of time.

7. Secure storage. For me it’s a full-on gun safe at home and a locking electronic-release rollbar-mounted rifle rack in the work truck. I went with a universal overhead mount from Santa Cruz. Had one in my last patrol car and when I moved to a truck, I got another. One of the best pieces of gear I could get. I feel a lot safer knowing my rifle is secured when it’s not on my person, and it’s faster and easier to deploy.

These are a few of my tips. What are some of yours?

About the Author: Jake is a LEO down Georgia-Florida way. Who may or may not like Spotted Dick. 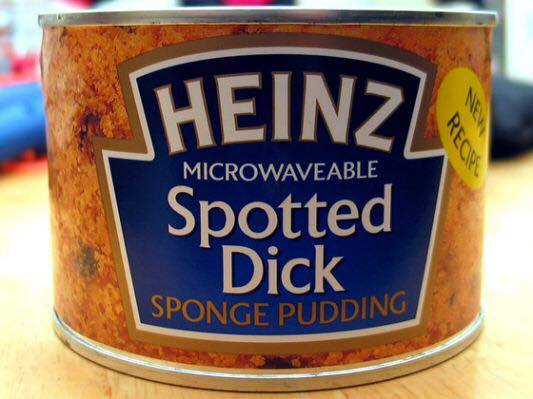 This is a real thing.

Jake describes himself thusly: I’m a small town deputy sheriff. I’m not special forces, I’m not SWAT, I’m not metro with LAPD or a homicide detective with the NYPD. I’m basically a problem solver. Everyday I handle calls from the mundane car in the roadway, to the worst calls for service, and everything in between. What I write will be from this perspective because I have no other. I hope something I write helps you.”

Jake has been a night-shifter for years, and a cop for over a decade and a half. Despite an uncanny resemblance to Peter Griffin (especially when he’s in his uniform shirt), we really like him. In fact, we count ourselves lucky to have him aboard.

Now watch him get embarrassed.

“Hey, it’s just a dot. She said she was clean, and I was on vacation. Anyway, Doc says it’s just a freckle.”

Jake Bush, on the subject of spotted dick.