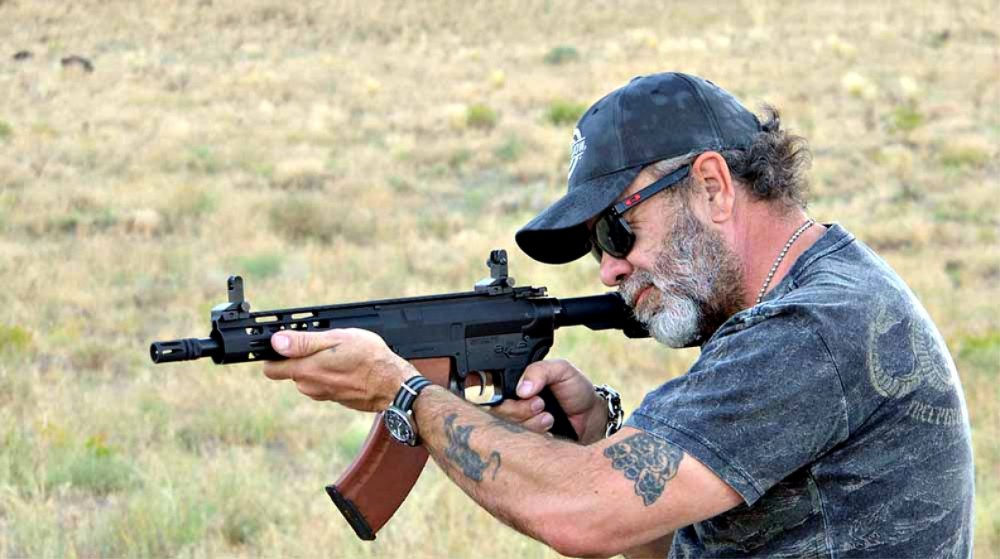 The Palmetto State Armory KS-47 is based on the AR-15 platform and fires a 7.62x39mm caliber round, allowing you to use AK style magazines. Mad Duo Mike got his hands on one, and here’s what he has to say about it.

Those rounds do not fit into an AR magazine and AK47 magazines will not fit in the magazine well.

For years, lovers of the 7.62 x 39mm round had to either stick with AKs and SKS rifles or could fire that beloved round in an AR which used oftentimes questionably manufactured or otherwise unreliable third party magazines. The 7.62 x 39mm rifles made by Colt and their magazines were exceptions to this, but spotty manufacturing dates and the higher price kept them as more of a rarity.

While some of us might have a chuckle and think “300 Blackout solved that problem”; it only did so in duplicating the performance of the round. Even though the price of 300 Blackout has been decreasing, it is still not as cheap as steel-cased 7.62 x 39mm.

That’s Where the KS-47 Comes In

If you have several lifetimes worth of AK magazines and want to use them in an AR chambered in 7.62 x 39mm, you need to look no further than Palmetto State Armory’s KS-47.

I have long been a fan of PSA’s firearms and have used many of their AR parts in rifle builds. Their American produced AK’s, as well as their legacy ARs, have given me little if any problems and when I got a chance to try their “Hybrid” KS-47, I leaped at the chance.

Here was an 8″ barreled AR pistol with a brace, 5/8 x 24″ threaded muzzle, chambered in 7.62 x 39mm and it would work with my AK magazines! What’s not to love about that! It offered the best of both worlds: an inexpensive and proven round with reliable and relatively inexpensive magazines in a familiar and accurate AR platform.

The KS-47 G2 upper receiver has a Picatinny rail, so there is no need for third world type side rails or floppy top covers. It is precision machined out of forged 7075 T6 aluminum, and then hard coat anodized for durability. This upper has integrated over-insertion tabs to prevent the bolt from dragging on the magazine.

Its CMV 4150 barrel is chambered in 7.62×39 has a 1-in-10 twist with a single, large feed ramp to accommodate the larger case diameter of the 7.62×39 round. The barrel is nitride treated for accuracy and durability and is finished off with a 5/8-24 thread A2-style compensator. The forward assist, dust cover, charging handle, and safety are all standard AR-15 parts and the handguard is a PSA 7″ Lightweight M-Lok Free Float Rail. 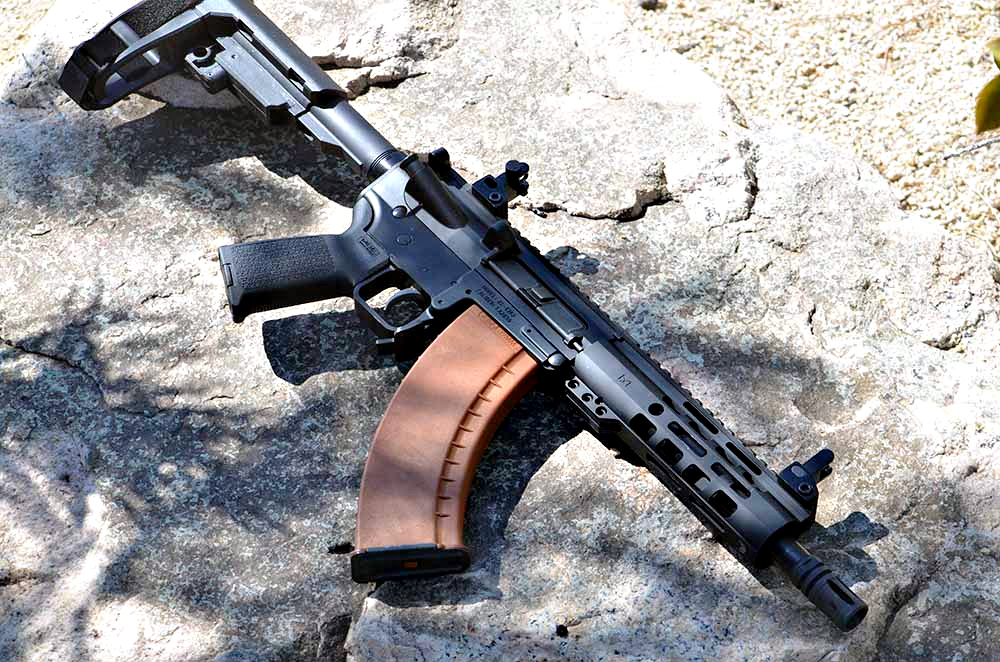 A hard coat anodized 7075-T6 forged lower receiver accepts standard AR-15 fire control groups. However, due to the magazine catch geometry, one-piece drop-in triggers such as CMC style triggers will not function in KS-47 G2. The KS-47 G2 Lower will accept most other aftermarket fire control groups such as those made by Geissele and Jard.

An extended magazine release is outside of the trigger guard for safety, which allows for an AK-style release movement but features oversize side paddles for fingertip release by the trigger finger. The KS-47 G2 lower has steel reinforcements to accept AK style surplus magazines including drum-style.

The first order of business was to install a set of sights and I opted for a set of Dagger Defense aluminum sights. Dagger Defense is a veteran-owned company that sells their sights on Amazon.com for around $30 a set with free shipping. A very affordable set of BUIS and they have given me no problems at all.

While I have nothing against the A2 style flash hider, I am a firm believer in “Silencing all the things” and removed it in order to install a SIG Sauer taper mount so I could run a suppressor. The installation and timing of the brake was minimal. I mounted SIG Sauer’s Cadillac of cans on it, the SRD338Ti-QD. It brought the noise level way down from somewhere in the 160 dB range to below 120. It might be a bit of overkill, but it was worth it.

I suffered no failures to feed, eject, or extract using 7.62 x 39 Barnaul 123-grain FMJ, both suppressed and unsuppressed. It’s made in Russia and is steel-cased Berdan primed and non-reloadable, most importantly, it works!

In testing, I used a variety of magazines including Yugoslavian, Chinese, Russian Bakelite, Bulgarian, Hungarian and even a few USA-made mags from MagPul (included) and Tapco. All fit and fed without issue. I will probably mate my Tapco mags with this particular firearm as they look better here than with a wood-stocked AK.

Accuracy was a closer to AK than AR-type with groups at 100 yards averaging 2.5 – 3”. Not terrible, considering I was shooting iron sights. Admittedly, while the recoil wasn’t harsh, 7.62 combined with a short barrel and a brace make for a hell of a teeth rattler and magazines that seem to never run dry!

Long-time AR users may miss the bolt catch. There is nothing to hold the bolt open, just like an AK, so that should not be a deal-breaker.

All in all, I really liked this one. However, you can witness first-hand how much better and more effective a dedicated stock is when compared to even one of the better braces. For the sake of your dental work, you might want to consider going the SBR route in the future.

If you enjoyed this article, you’ll want to check out all of the other articles that Mike Searson has written for Breach-Bang-Clear.