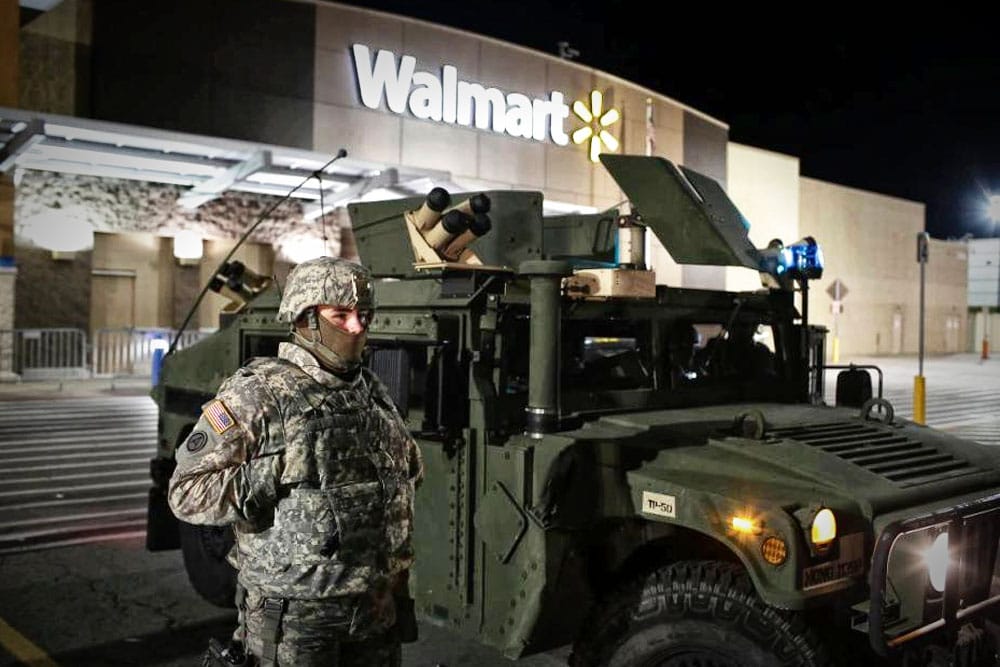 Just The Tip: In Defense of the Walmart Belt

So there I was at an EAG Shoot House class.

Given the nature of shoot houses in general and shoot houses with multiple parties in particular, all the instructors and students were properly armored up. Plate carriers, war belts—you get the idea. Normally when donning an overbelt I opt for a minimalist belt underneath, lest you end up uncomfortably stacking bigassed buckles together. 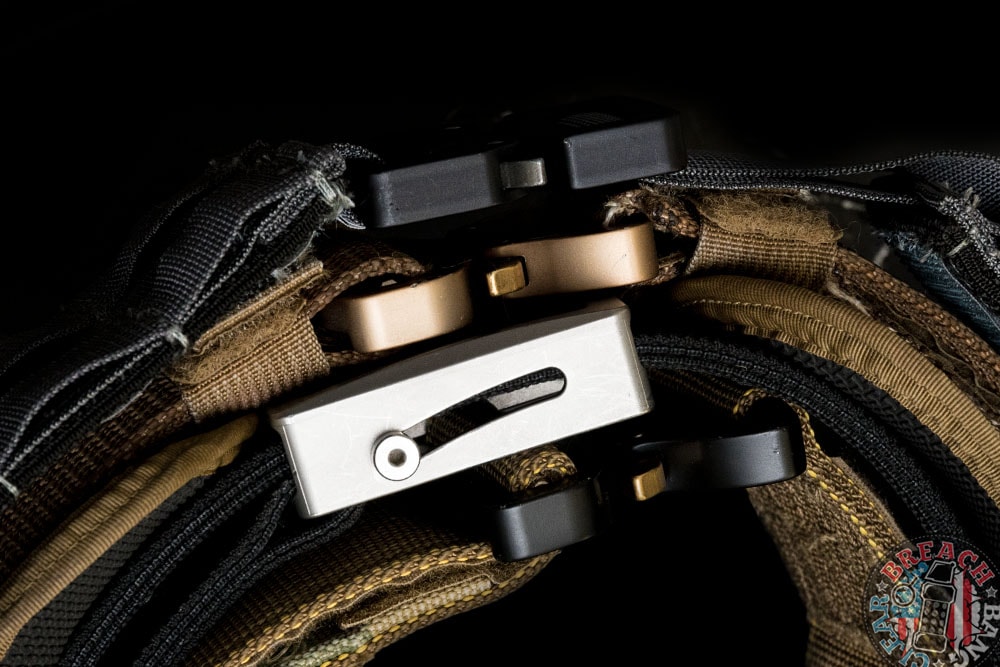 And of course, that was one piece of gear I left at home and instead only had a bombproof belt with the associated large buckle around my waist. As a way to mitigate stacked buckle syndrome, I offset my pants belt buckle toward my left side (much in the way Matt Jacques outlines in this Just The Tip piece). At the end of a long training day, I acquired a new sensitive rub mark from the pressure of the overbelt on the oversized buckle of my pants belt.

What to do? The best option in Alliance, Ohio was to head to the popping Friday night hot spot that is Walmart on State street. After circumventing the meth heads and people trying to sell me gift cards for cash, I laid down $10 for a Chinamart belt to wear on my pants for the duration of the course. It was rather thin, formed from cheap leather (marked “genuine leather,” which is the lowest grade), with buckle finish that would wear off in hours rather than days or weeks, and it was anything but stiff and firm. Flaccid would be an appropriate adjective.

But it served its purpose. It held up my trousers and prevented issues with buckle stacking and rubbing when wearing a war belt. I fully expected to just discard it or toss it in the back of my closet when I finished the course. 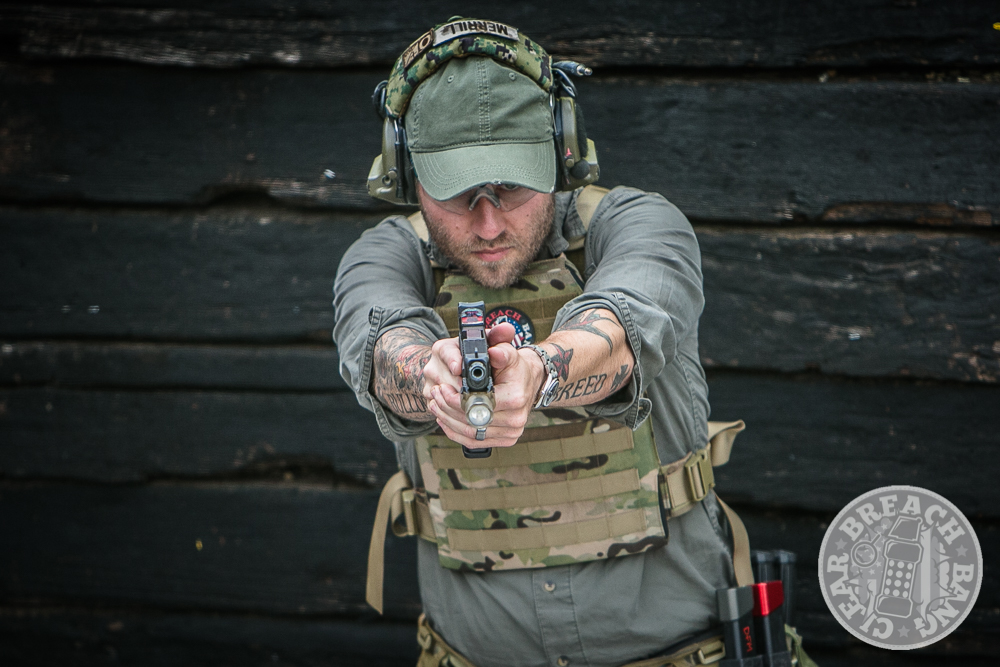 Laziness won the day, so obviously I didn’t just throw it away. Plus, you know, it cost $10. But sometimes when apathy and unintended frugality prevails, it can bring a lesson or two with it. And lesson number one was that when worn under an overbelt, a low cost belt can do the job comfortably.

In its base form, a belt is simply something purpose-built that holds your pants up. An improvised belt can be anything from a shoelace to a cargo strap (incidentally, the first riggers’ belts were just cut down A7A cargo straps). And if your only need is to hold up your pants, it doesn’t take much to accomplish that task.

The problems begin when we add weight to our waistline (from guns and gear, not from tacos and beer). That paltry pliable belt is going to stretch, sag, and roll. Over the years there have been many solutions to these issues. The traditional fix was simply to utilize thicker, sturdier leather. From the knights in England of yesteryear through the Sam Browne belt of your father’s generation, this was fairly satisfactory. Still, given enough time and weight these belts would stretch and have to be replaced. These days we have a myriad of options in both material and fastening: nylon, polymer-reinforced leather, carbon fiber stiffeners, Kevlar inserts, and more.

If you want a sturdy belt to carry a gun all day, there’s never been a better time to get one. This is especially important if you’re carrying a gun and assorted accouterments outside the waistband on your dominant side. Sometimes for duty and war fighting rigs, suspenders are added for additional support and stability—most notably when a belt isn’t used in conjunction with a plate carrier or chest rig. Other times Velcro inner/outer belts are used. Or belt keepers if you’re as old as Hernandez.

This is all fine and good, but it’s not always an advantage depending on how you’re carrying. I carry a handgun every day, specifically a Glock 19 equipped with a Surefire X300U WML, which in the wide realm of concealed carry guns is on the larger end of the spectrum. I’m also a card carrying member of the cult of appendix carry (I will report in when I finally shoot my dick off). One day, for no particular reason sans perhaps that it happened to be near (remember: lazy), I donned that Walmart belt and clipped my holster into it.

In fact, that Walmart belt that would droop even under the meager load of a Glock 43 if it was at 3 o’clock and OWB was great with a Glock 19 AIWB. Sure, the belt flexes—and that ended up being a Good Thing. It allowed the gun to contour against my body and ultimately made for better concealment and a higher degree of comfort. 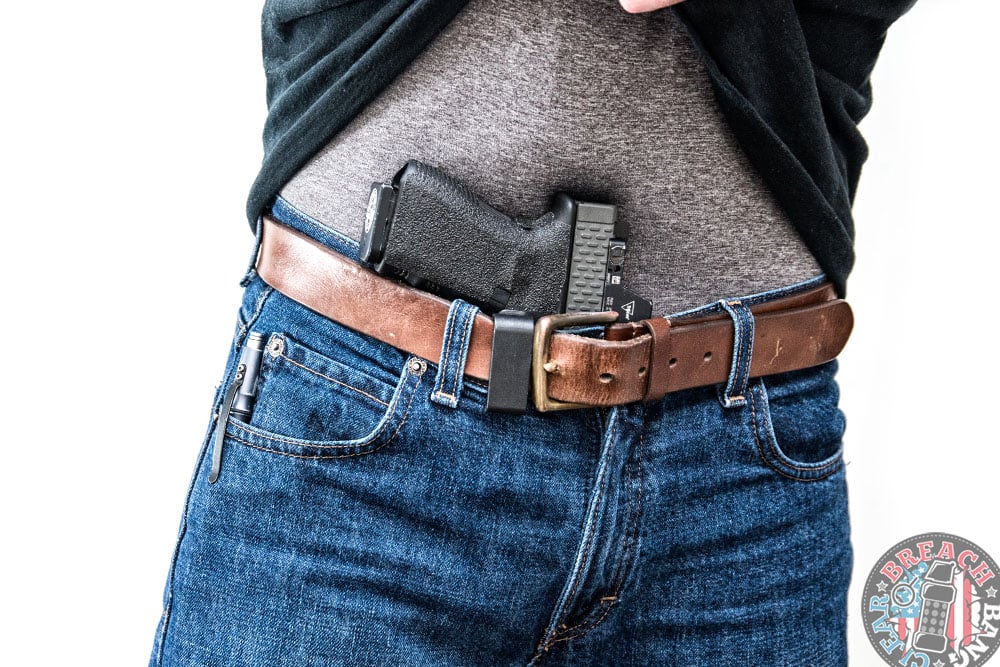 The über thick and stiff belts kept my gun exactly in the same place all the time, which I found to be a hindrance for AIWB with some holsters. It’s not just about the belt either; with many super-sturdy belts, the buckle itself prints and gets in the way more than anything else. The pistol being able to angle with the body hasn’t spoiled the draw either, at least per the shot clock. 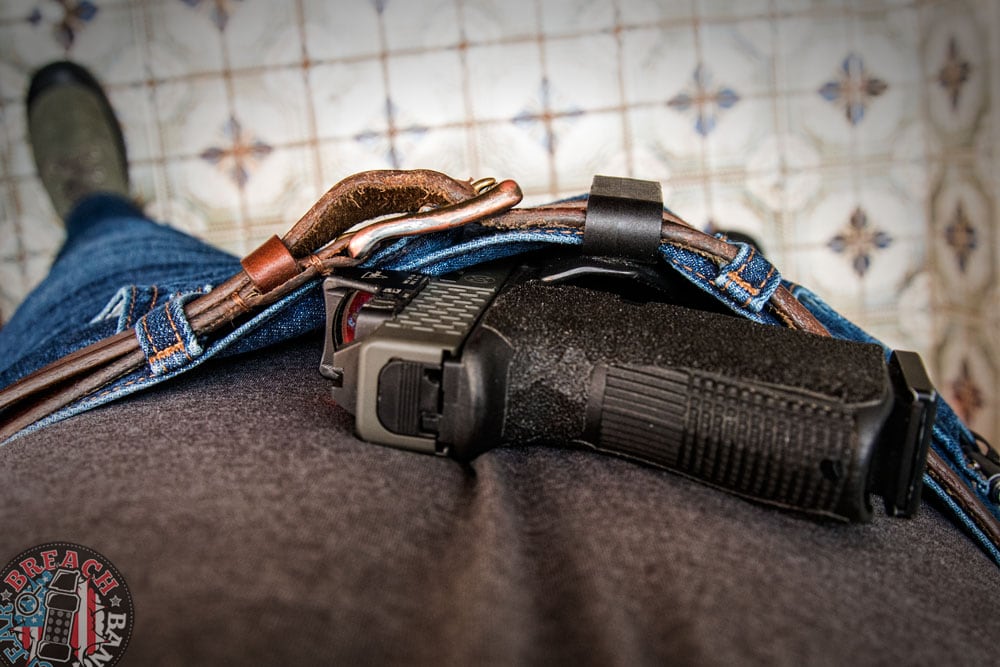 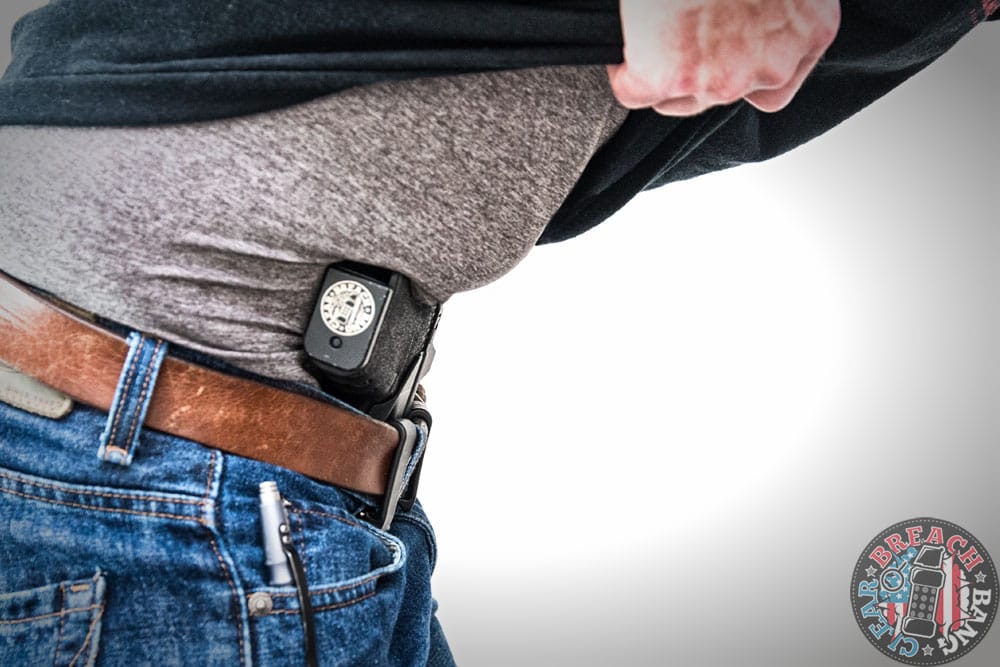 There are several holsters and attachments specifically designed to allow the carried gun to do the same thing when worn AIWB regardless of the belt used: Foam wedges, RCS claws (used by about any quality holster manufacturer), and a number of improvised methods. But with my lazy Walmart belt, at least for my body and holster setup, no specialty items needed. 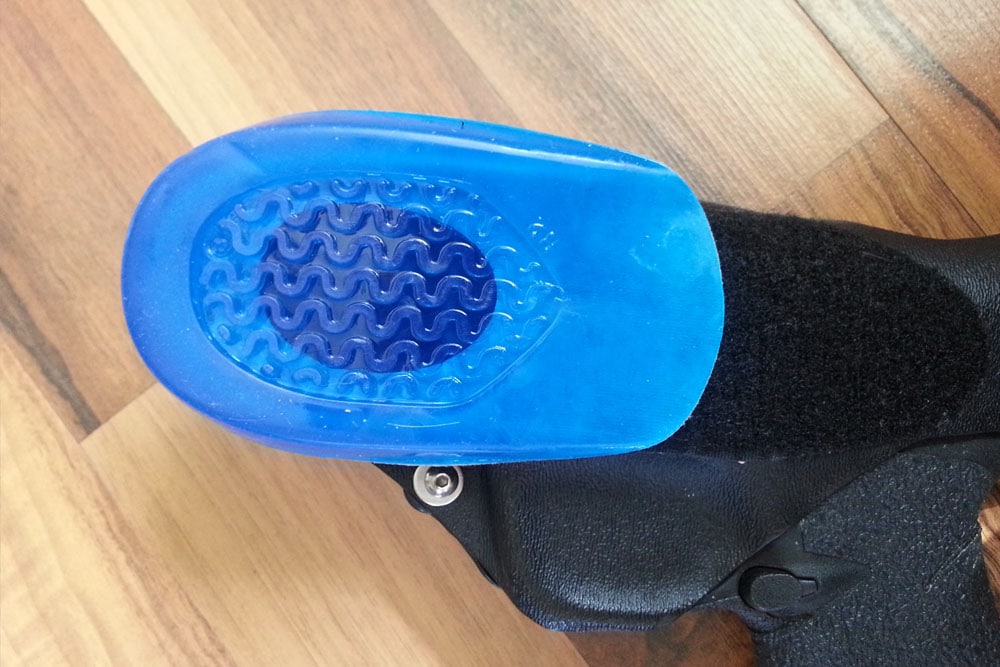 [Yes, that is an insole. No one can say Melody Lauer isn’t awesome at upcycling.]

Has the belt stretched out? Yup. Has the buckle finish worn off? You betcha. Is it infinitely adjustable? No chance. Is it “tactical”? Absolutely not. Did I have to cut another hole in it with a pocket knife one day? Sure thing—but I didn’t scoff about it like I may have with a $100 belt. 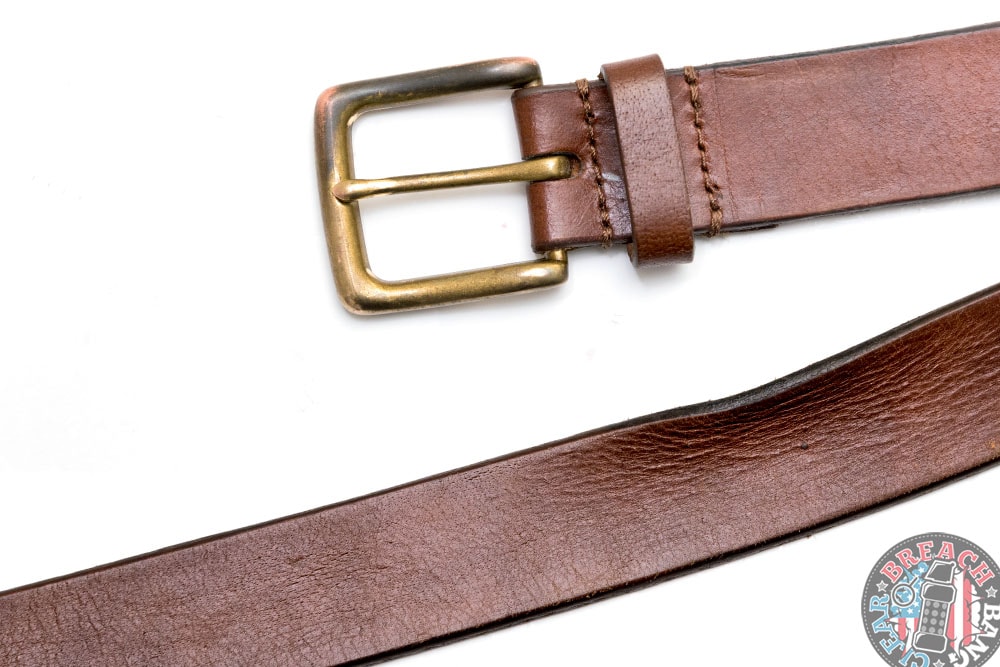 This el-cheapo special has been my daily wear belt since July of 2016. Eight months later it’s rather long in the tooth, but I strongly suspect it will last another couple of months before I have to replace it. And replace it I will, for the cost of about $10. The cost/benefit ratio is very high indeed. 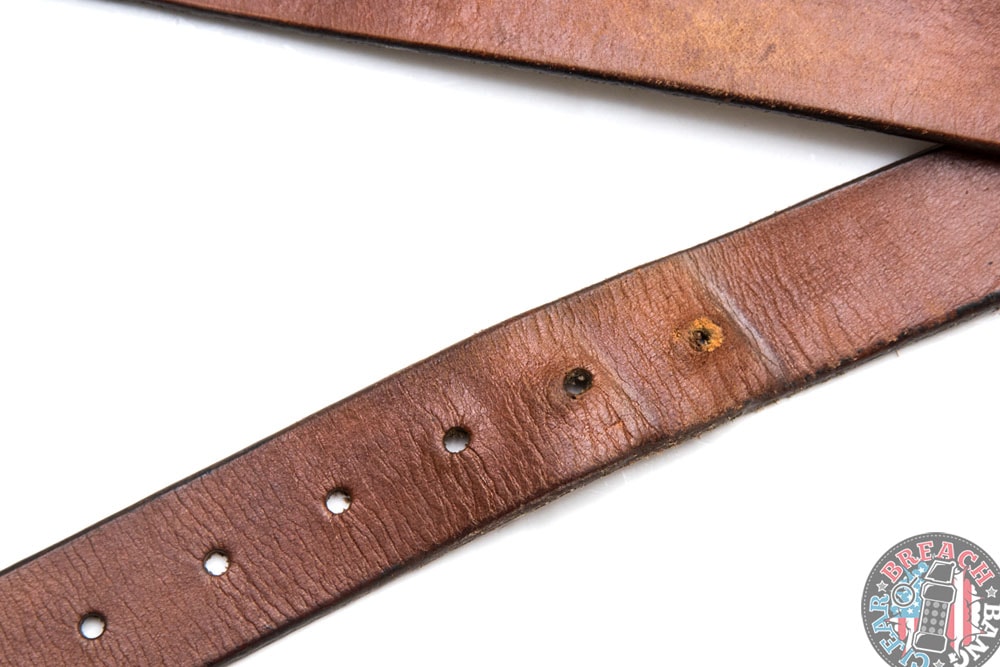 I won’t say that this will work for everyone in every situation. I strongly suspect someone with a larger lower abdomen won’t necessarily have the same results. Honestly, if you’re carrying more than just a pistol AIWB it’s probably not going to work out (my spare magazine goes in SnagMag, for instance) But at the end of the day, it might be worth the $10 just to give it try. 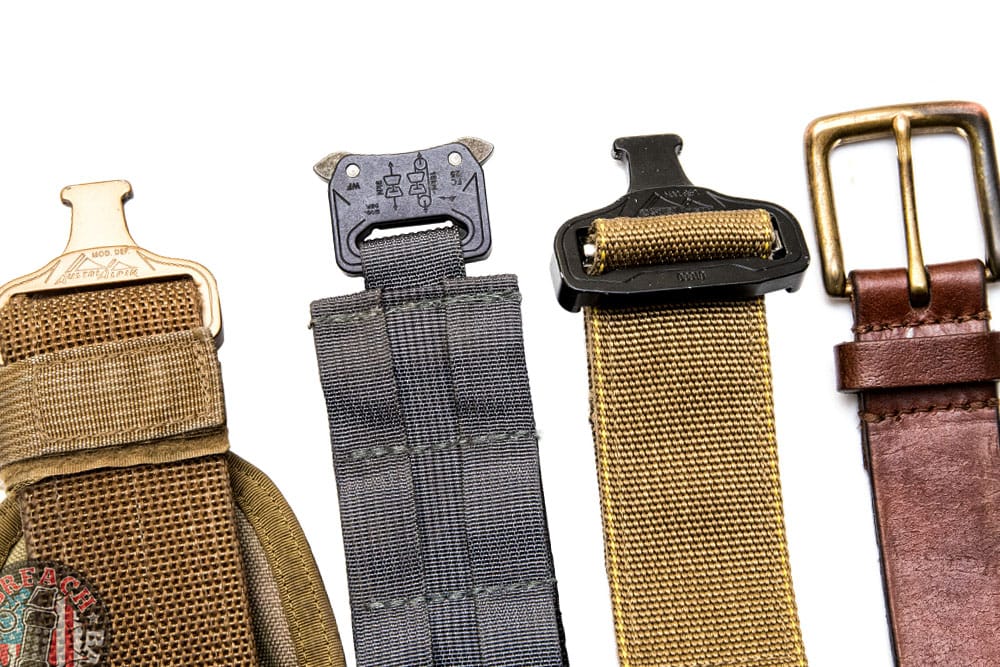 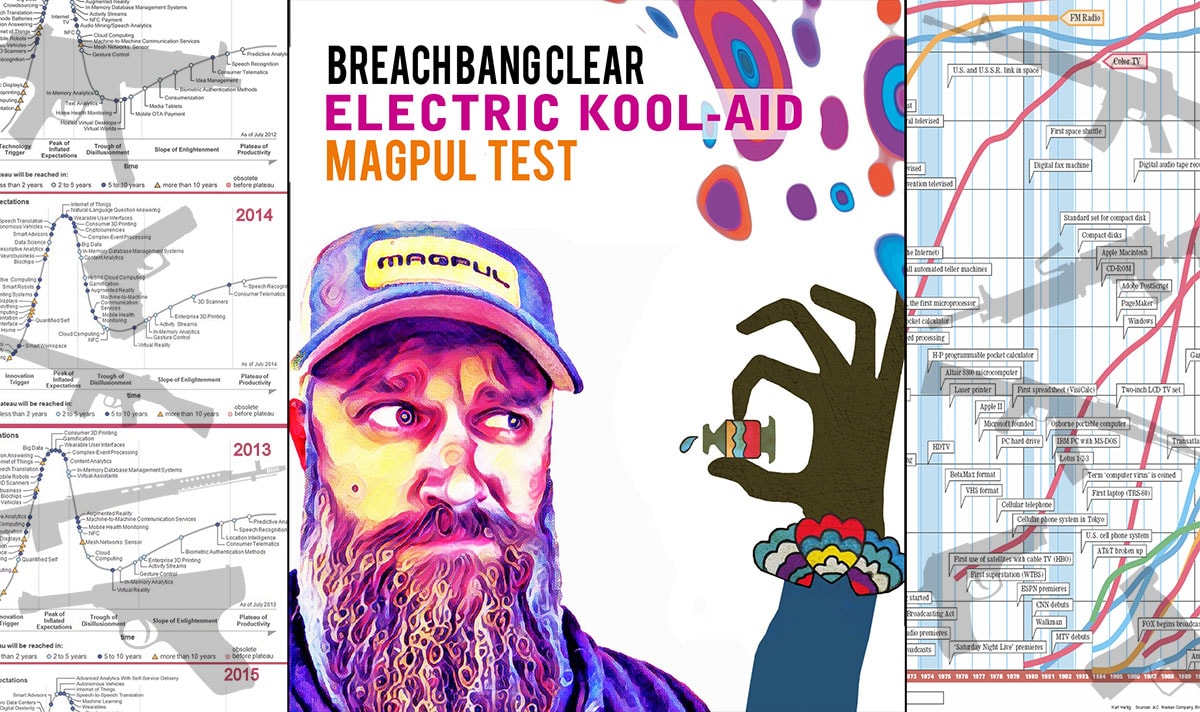 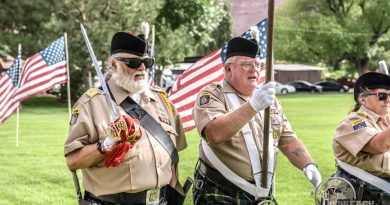 Warfighters getting long in the tooth? Support them especially! 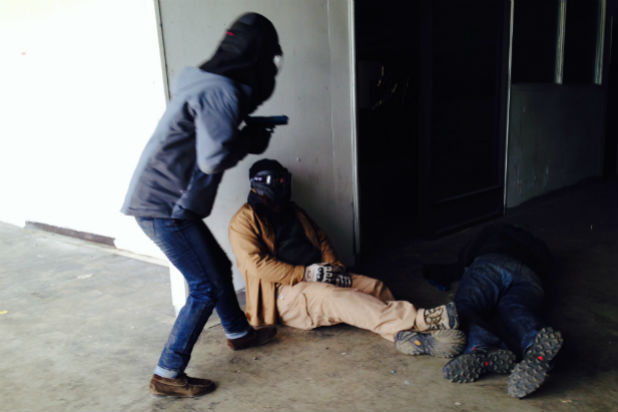 11 thoughts on “JTT: In Defense of the Walmart Belt”