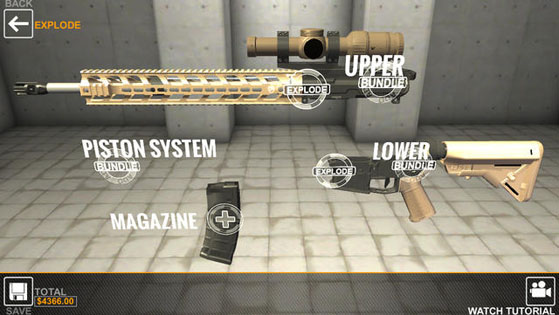 Gunstruction is way cooler than you think, even if you think it’s pretty cool.

Will that Gasblock fit the new free-float forearm you want to buy? Will that new buttstock fit your existing buffer tube? Are you sure that your new build is going to have the parts compatibility you need, and will turn out looking how you intend?  Until now, you would have to ask questions on forums (where we all go for ironclad information, from true experts) call the manufacturers one by one or simply make an educated guess based off others peoples’ builds and hope for the best.

Gunstruction, a 3D AR-15 construction program for your computer and smart phone, is helping to change that. Launched originally in August of 2013 on AR-15.com, Gunstruction has more recently added Apps for IOS and Android. So what exactly is so special about this program? After all, the idea is seemingly not new; you can find a series of other “builder” programs and apps out there (like as the one on Brownells website).

Well, the difference is that Gunstruction is not a toy, it’s a tool. 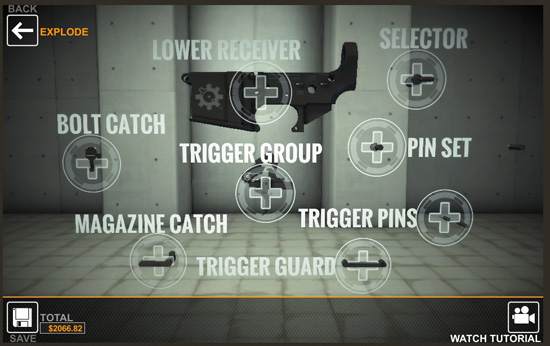 Its being touted as the “ultimate 3D firearms configurator” and for good reason. The company is run by people that know how to properly create an ultra realistic 3D model of a gun; video game developers who also happen to be firearms enthusiasts and shooters. Using technology and programs from the video game market, Gunstruction has built a solid program to help real world shooters get an accurate view of the AR-15. The program is best described as a means of “prototyping” your design, with the hard part (like scale and dimensions) already being done for you. Everyone from the owner and the project manager to the guys doing the data input understand firearms because they all shoot. This allows them to understand their mission, which is to build a comprehensive, intuitive and easy to use program to aid fellow shooters, gun shops and even manufacturers. 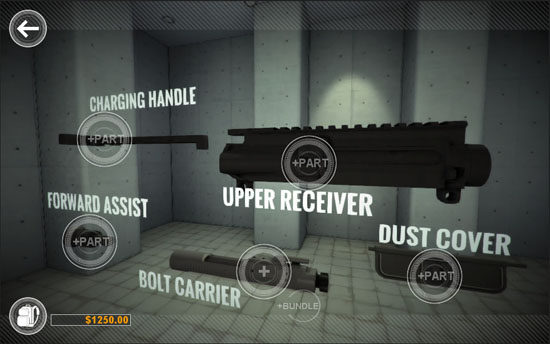 Gunstruction allows you to “explode” an AR-15 into its base component parts and assemblies. You can pick out a brand and style of forearm, stock, barrel, optic, etc. from well known companies like B5 systems, MagPul, Rainier arms with more options being added all the time. As you pick the parts out and “assemble” your build, you can monitor the cost of the parts, and even follow links to where they can be purchased.  Using photographs, CAD drawings, and the actual physical part, the programmers add  current production components and accessories to the menus with an impressive level of realism and detail.  The program is laid in such a way out to prevent non-compatibility of parts, and won’t allow you to build a “bad” gun, or one that wouldn’t actually work in real life. Selecting an optic, such as a red dot, you can even check your co-witness. By rotating the 3D image and zooming in, the reticule is visible as well as the profile of your BUIS.  Aside from identifying conflicts and problems as you build your dream gun, you can switch from basic black to a slew of Duracoat colors and camo schemes. The smart phone apps are extremely affordable, and fun to use. 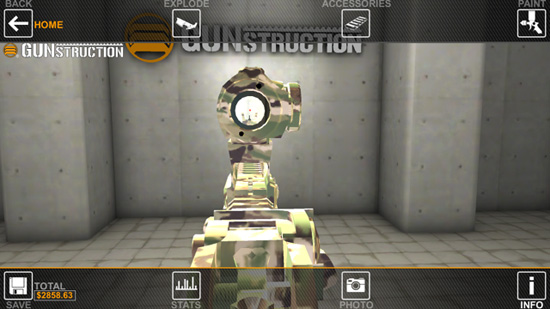 Now check this out – the company runs a contest every month, which gives the builder a budget and set of confines to work in. If your rifle build is selected as the best in each contest, they will build you that EXACT rifle! That’s a pretty cool giveaway, and they are set to start another soon.  Overall, Gunstruction is pretty bad ass cool. We were initially skeptical about it, having been disappointed by other more basic, gimmicky “boredom fighting” apps out there. Having used Gunstruction to lay out some new builds now, that doubt has completely gone away. Take the time to check out Gunstruction, you will find its worth your time and is actually really fun.  If you are a company that would like to see your products showcased on Gunstruction, feel free to contact them at djo(at)gunstruction.net. 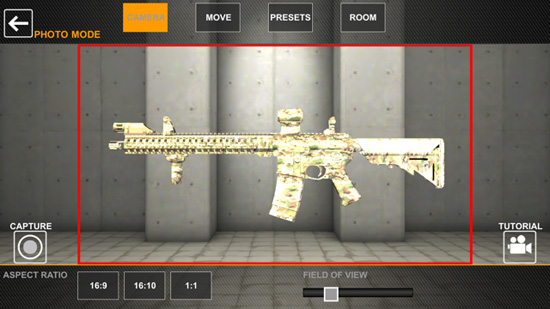 2 thoughts on “Gunstruction: 3D Prototype your next AR-15 Build”