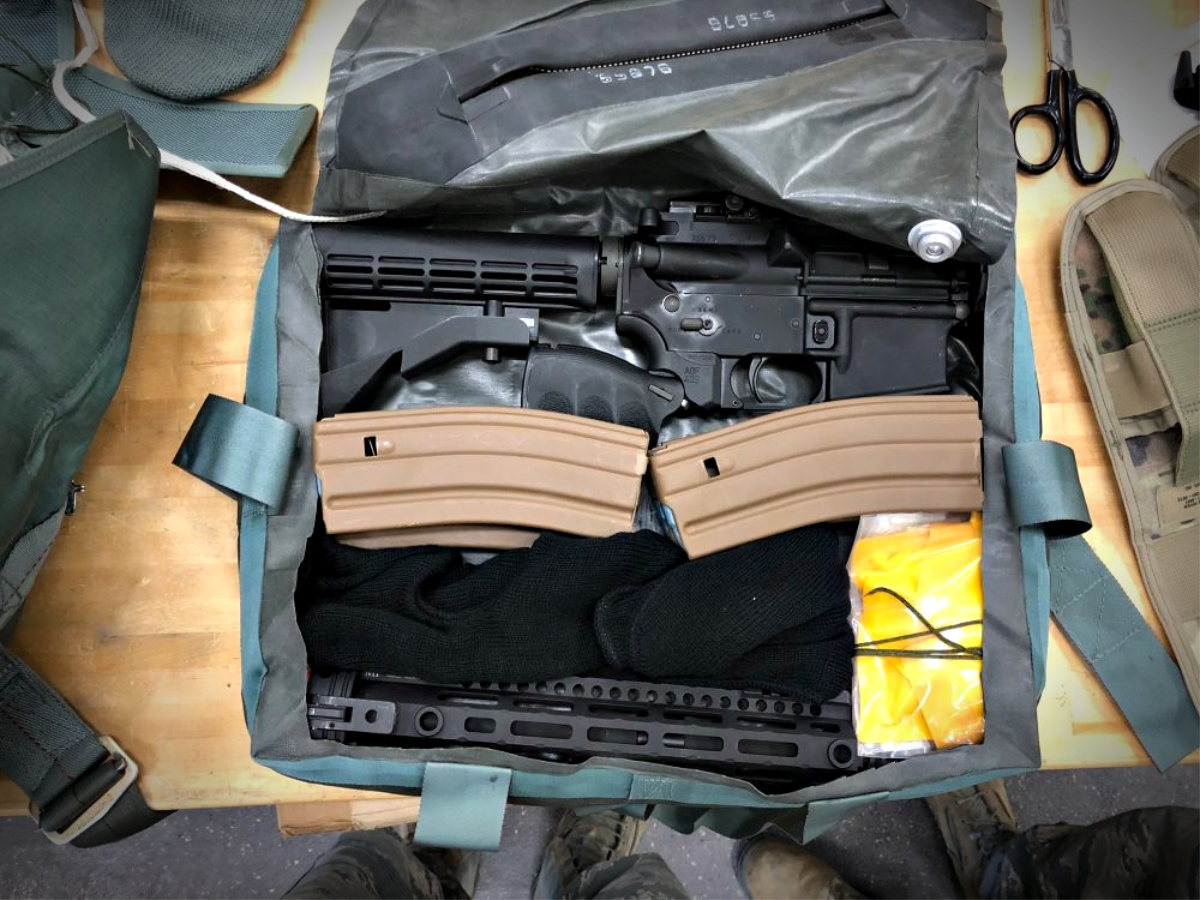 While in the skies above, pilots in modern military aircraft often have no shortage of weapons literally at their fingertips, but a pilot who finds himself on the ground behind enemy lines is worse than a bird with clipped wings. During the First and Second World Wars, the best a pilot could have in the way of a personal defense weapon or survival gun was a sidearm. Later, during the early stages of the Cold War, the United States Air Force relied on what were some rather odd survival weapons. Let’s take a look at the various survival rifles over the years, leading up to the GAU-5A.

Survival Guns Over the Years

These included the M4 Survival Rifle, a .22 caliber bolt-action rifle that was developed by Harrington & Richardson from their commercial M265 sporting rifle. It featured a sheet metal frame with a telescoping wire buttstock. It was, simply put, “better than nothing,” but it was mainly intended as a survival gun to allow a downed aircrew to forage wild game for food rather than to deal with a hostile enemy.

Developed after World War II for downed aircrews, the M4 Survival Rifle was better than nothing. But it wouldn’t be a pilot’s first choice when facing an enemy soldier! (Photo: Creative Commons/Public Domain)

The M6 Air Crew Survival Weapon was another weapon that was developed by the Ithaca Gun Company and the Springfield Armory as rifle/shotgun designed for pilots who flew over the Arctic and other uninhabited areas. Again, it was more for foraging than defending, which prompted the Air Force to explore other options.

Developed by the Air Material Command after World War II, the M6 Aircrew Survival Weapon was designed to fit into the standard USAF survival kit. It was issued to pilots flying over the Arctic and other uninhabited regions. (Photo: Creative Commons/Public Domain)

From that came the AR-5, a bolt action takedown rifle that was still chambered for the .22 Hornet cartridge, and that led to the ArmaLite AR-7 Explorer, a semi-automatic firearm in .22 Long Rifle caliber that was developed by Eugene Stoner. Introduced in 1959 it is still in use today as an aircrew as well as civilian survival gun. While a generally reliable firearm – so much so that it has been adopted around the world, including by the Israeli Air Force — the AR-7 was lacking in stopping power.

ArmaLite AR-5 is a lightweight bolt-action takedown rifle chambered for the .22 Hornet cartridge. The USAF adopted it as the MA-1 aircrew survival gun. (Photo: USAF)

The AR-7 was designed by American firearms designer Eugene Stoner, who is most associated with the development of the ArmaLite AR-15 rifle that was adopted by the US military as the M16. The civilian AR-7’s intended markets today are backpackers and other recreational users as a takedown utility rifle. (Photo: Creative Commons/Public Domain)

Hence the Air Force turned to another of Stoner’s designs – namely the AR-15 platform that was adopted by the U.S. military as the M-16. The Air Force had been the first branch of the service to adopt the AR-15. They soon decided to adopt a carbine version with a 10.5-inch barrel and 4-inch flash hider. The Air Force, unlike the Army or Marines, had no naming convention for small arms and simply put the weapon in its aircraft gun category. Thus was born the GAU-5/A. It became the standard issue weapon for Security Police dog handlers and other specialized personnel. GA was meant to denote an automatic gun while U was for “unit” hence: “Gun, Automatic, Unit.”

Where it gets confusing is that the U.S. Army adopted a nearly identical version of the weapon, which Colt –then the sole maker of the CAR-15 line of military firearms – called the XM177E1. Both versions select fire with semi- and full-automatic fire modes and each was officially classified by Colt as submachine guns. This was despite the fact that these still were chambered in the .223 Remington cartridge rather than a pistol cartridge that is typically used in submachine guns.

The Air Force’s GAU-5 was updated as the GUU-5/P, which featured a longer 14.5-inch barrel with a 1-in-12 twist. Otherwise, the firearm kept the modular design that had made the CAR-15s popular with the military.

The GAU-5 was upgraded as the GUU-5P for use an anti-personnel weapon. (Photo: USAF/Public Domain)

During the Vietnam War, the Air Force also developed the Model 608 CAR-15 Survival Rifle, which was meant for use by downed aircrews. This model, which resembled the Colt Commando, also featured a 10-inch barrel. Its modular design allowed it to be broken down into two subassemblies and stowed in a seat pack.

In recent years the Air Force has again considered the benefits of a modular takedown weapon. This has included the GAU-5A. The new version is a modified M-4 carbine, the same type that is currently used by the U.S. Army and United States Marine Corps, as well as Air Force security personnel. This version is a modified “takedown”. It can break into two major pieces for storage within an aircraft that includes the ACES II ejection seat.

These new versions were designed by the Air Force Gunsmith Shop, which was first formed in 1958 to repair and refurbish small arms for the Air Force. The crafty Airmen at the Gunsmith Shop have made numerous modifications to the M4. One modification was replacing the standard 14.5-inch barrel with a 12.5-inch to reduce the overall length. This was done in part to ensure that it can fit in the aforementioned ejection seat. That is no ordinary barrel but rather the specialized Cry Havoc Tactical Quick Release Barrel (QRB) kit, which allows the gun to neatly break into two pieces.

The GAU-5A weighs just under seven pounds and can be put together in about 30 seconds. (Photo: USAF)

The weapon weighs less than seven pounds and can be put together in just about 30 seconds. That might still be more time than most pilots would like to spend on the ground in hostile territory. Still, it will give those flyers some much-appreciated firepower.

Unlike the original survival weapons that were primarily only good for foraging, the GAU-5A fires the high-velocity 5.56mm round. So it can take down large game. More importantly, it can take down any enemy soldier who finds a pilot with the unfortunate luck of being shot down.

To date, the Air Force’s Gunsmith Shop has built and shipped out some 2,700 of the new weapons. The cost to develop the system was around $2.6 million. So the GAU-5A price tag is less than $1,000 or what a reasonably decent civilian AR-15 would cost.