Leonard Funk | Bucket o’ Balls and Backbone like a Boss

Today we’re going to tell you about a guy whose balls were so big that, when he walked down the street the townsfolk thought the church bells were ringing. The one and only 1SG Leonard Funk.

Born in 1916, Leonard A. Funk first enlisted in the United States Army in June of 1941, before America was officially at war. He was 21 years old and 5′ 5” tall. Upon joining, Funk volunteered for airborne training. He passed training and ended up in Charlie Company of the 508th Parachute Infantry Regiment. Fast forward to 1944 and Operation Overlord. D-Day. Like many units, they were dropped far away from their intended location and had trouble meeting up with one another. Despite the issues, and the Krauts actively trying to murder him, Funk made it though.

Later that same year he jumped into Holland as part of Operation Market Garden. The mission was to secure bridges across the Rhine. Funk was awarded a Distinguished Service Cross for his leadership while cracking a particularly tough German nut. 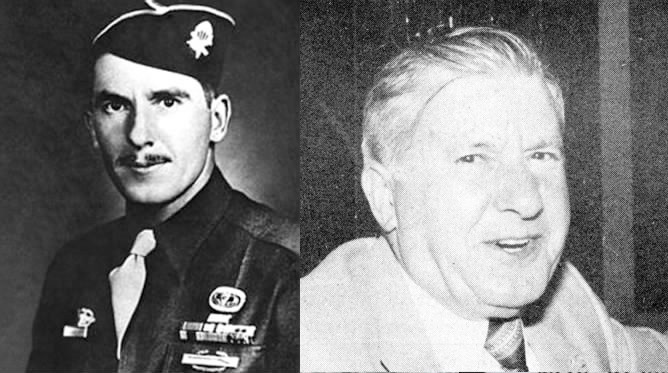 But we don’t stop there. By the Battle of the Bulge, which was only a few months later, Funk was the company, First Sergeant. The German army was trying to bust through the lines in Ardennes. All reserves were called into action to keep the line. His unit, so used to jumping out of airplanes, took trucks.

At this point, Funk was an acting platoon commander because his 2Lt had been killed. So here’s Funk. Small, but certainly a seasoned and dangerous man, with a hodgepodge platoon of clerks and REMFs. They’re in Belgium. It’s during a snowstorm. And there are fifteen houses currently occupied by Germans that they have to take. Did we neglect to mention that there were only five men plus Funk at this time? Well, that was the case. Anyway, take the houses they did. His platoon-minus captured thirty Germans. Another element nabbed about fifty more. All 80-some-odd Germans were held in a backyard.

There’s still active fighting, and every spare man was needed until more bodies came into the fray. Only four soldiers were assigned to guard the prisoners until relief arrived. Shit happens. Funk and another returned to the fight and attempted to link up with another unit. Those prisoners were going to figure out 80-on-4 was an easy day in a short period of time, guns or no guns.

Briefly after leaving Funk ran into some heavy fighting. Wisely realizing two men cannot possibly beat a large element (even before Rambo, Leonard Funk knew Rambo was bullshit) they returned to the house. He saw more friendly forces there and assumed relief had arrived. He slung his Thompson subgun over his shoulder.

As he walked towards the house, one of the previously presumed friendly soldiers held a weapon to him. It was a Nazi officer, not an American paratrooper. The Germans were wearing white camouflage capes similar to American ones, hence the mistaken identity. Funk found out too late. The Germans had freed and re-armed their prisoners, and subsequently captured the four American guards. Take those 80 former prisoners, give them arms, and add 20 more Germans. It’s literally 100 Germans. And two armed Americans. Out in the open.

Funk has to know he’s caught. He knows the odds. But in the face of repeated commands in German that he didn’t understand–he laughed. A roaring belly laugh. Later he would state that this wasn’t on purpose, but that it was the only reaction he had. He laughed so hard it made some of the Germans smirk and laugh too. Laughter can be infectious.

It was at this moment that he acted. Funk pulled the Thompson from his shoulder and emptied it into the Nazi officer. The soldier he was with was killed in the return onslaught, but not before the American prisoners freed and armed themselves. Funk’s tiny platoon killed more than 20 Germans and wounded an almost equal number. The remaining Germans then surrendered.

Afterward, it’s reported that Funk said: “That was the stupidest fucking thing I’ve ever seen!”

In August of 1945, he was awarded the Medal of Honor for his actions during the Battle of the Bulge. During his tenure as an American warrior, he also ended up with a Silver Star, Bronze Star, three Purple Hearts, and of course the aforementioned Distinguished Service Cross and Medal of Honor. 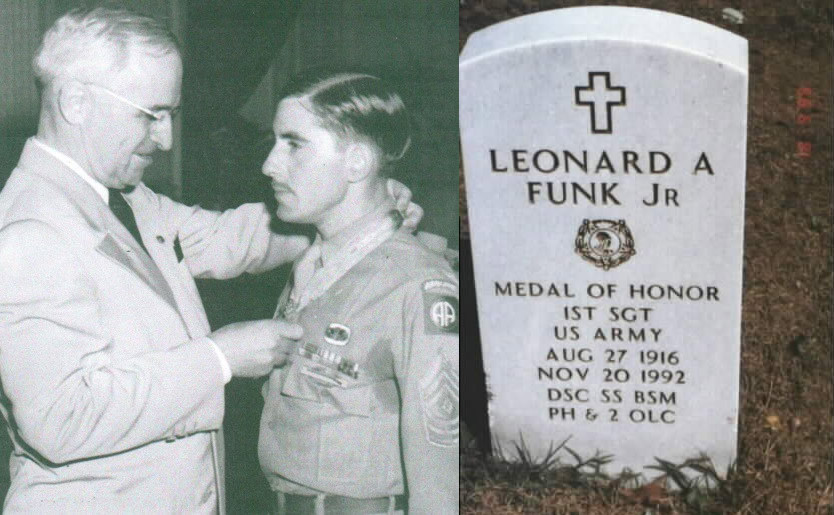 Leonard A Funk passed on November 20th in 1992. Raise one to him tonight.