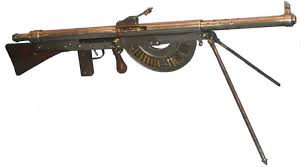 Assorted Ramblings
March 19, 2014July 14, 2019 Mad Duo 0 Comments
Today’s Weapon Trivia Wednesday will be covering the Chauchat, one of the earliest weapons of the modern machine gun era. Used by the thousands by troops of many countries in WWI (including the United States and the AEF), the Chauchat interesting, in some ways innovative, and singularly awful. No, really. It was a terrible weapon. Read on. Mad Duo
WTW: Fusil Mitrailleur Modele 1915 CSRG Chauchat

There are many famous small arms – the 1911, M2 .50cal Heavy Machine gun, AKM, and M16, for instance; however only a few are as truly infamous as the Chauchat. The Fusil Mitrailleur Modele 1915 CSRG Chauchat, produced by France at the turn of the 20th century, is one of those weapons. When it is mentioned it produces an almost visceral response from those who study arms.

The weapon was a product of the race to produce small arms to facilitate the first truly modern war the Great War or, as it would later be known, World War I. Originally designed in 1907, the “improved” design of 1915 was a direct reflection of the new type of modern warfare that had locked the Western Front into a bloody stalemate. By the time of the redesign what you probably remember about WWI from high school history classes on WWI had become reality; trench warfare, stalemate, and quagmire all come to mind.

The European armies called for a new family of weapons that combined automatic fire support capability with the mobility of standard issue rifles. Remember at this time machine guns were water cooled heavy sustained fire weapons that required a tripod and several soldiers to operate them. These qualities do not facilitate a speedy advance over the top to close with the enemy.

France’s small arms industry’s answer to these requests from the field was the Chauchat. It was chambered in 8x50mm Lebel and incorporated many new manufacturing techniques – techniques that would lead to many of its shortfalls. The weapon also utilized along recoil systems, an operating system that is rare in automatic weapons. In this operating sy stem the whole barrel would move back into the receiver during the recoil impulse. Another difference from it contemporaries was that it was magazine fed and not belt fed. It fed from a 20 round magazine. As the war progressed the Chauchat would be adopted by eight other countries, including the U.S., which adoped a version chambered in 30cal. That as you will see was extremely problematic.
Before we get into the laundry list of the Chauchat’s failures let us first look at what it provided in theory to the Great War forces that used it. On paper the Chauchat appeared to be the answer to requests from the field. It was truly man portable and did not require a crew to service it during operation. At 20 pounds it was light when compared to other light machine guns or automatic rifles of the time (the Lewis Gun for instance weight in at 29 pounds). This light weight was due to its design, which differed from the contemporary heavy water cooled sustained fire machine guns which needed to be mounted to tripod and water condenser. In theory the Chauchat would allow its users to conduct fire and movement beyond the trenches by bringing their base of fire with the unit while moving. Because it was magazine fed, gunners could quickly plus up their empty magazines with ammo from the riflemen rather than reloading belts. The magazines also had a cut out in the side to allow the gunner to check his ammo status (Magpul didn’t start that).

Now we will face the absolute, abject failure that the Chauchat actually was in the field. First there was the negative effect the stamping process had on the weaopn. Inconsistent quality plagued the system terribly, as parts were often not interchangeable. If something broke the whole gun was useless; parts simply would not transfer between weapons. Addtionally the long recoil operating system produced awful felt recoil because of its design. Another issue created by the long recoil operation was that the barrel could lock into the receiver until cool when the barrel was hot. As for the awesome “magazine cutout idea”, it caused something like 75 percent of all the weapons’s failurew. The open cutout and the dirt and muck of the trenches did not agree with one another and caused numerous stoppages. 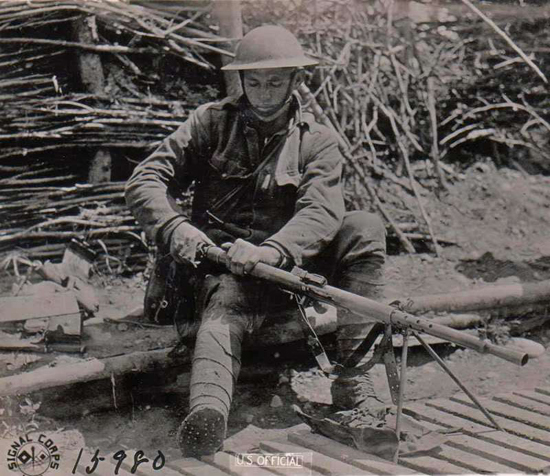 This no doubt sounts pretty horrible, but it got worse when the U.S. decided to adopt a .30cal version of the Mle 1918 and with that modification compounded every problemdescribed. The U.S. “Automatic Rifle Model 1915” (Chauchat) did not have properly reamed chambers,which as anyone who understands small arms knows created failures of epic proportion. Mle 1918s were so bad that U.S. troops from the American Expeditionary Force dumped them for rifles.
The .30cal Chauchats were pulled from service and the gears were set in motion to adopt the M1918 Browning Automatic Rifle (BAR) before the war even ended. The Chauchat is a classic example of great idea with horrific execution. Surprisingly (or disturbingly) over 250,000 Chauchats were produced during its tenure in various armies.
You might not like your M9 – but it could be a lot worse.
Mad Duo, Breach-Bang & CLEAR!