Now we bring you a review of the preferred optic of one of our shootingest shooters: the Trijicon Accupoint. She sends her review in from the dystopian wilderness of an Illinois collar county and knows wherof she speaks. The wise rifleman would heed her words.

This article first appeared in 2015 – but the classics are often best, and Trijicon makes good stuff.

Kim has been using the Trijicon Accupoint for several years.

For the past 6 years, I have equipped my patrol rifle with a 1.25-4x Trijicon Accupoint. Prior to making this change, I used iron sights and a magnified red dot. I made the change to the Accupoint based on my experiences at the Center Mass NPRC (National Patrol Rifle Competition). Courses of fire varied from room distance to 200 yards. Comparing optics with my shooting partners and testing their gear, I came to recognize that a magnified optic met my needs as both a street Deputy and a competitive shooter. I found that I did not like the on on/off magnification option that the magnifiers from EoTech or Aimpoint offered, and I wanted a more precise aiming point when magnified than the red dot offered.

My patrol rifle with the Accupoint are with me daily and have seen rough use. The Accupoint has been on board my rifle through two barrels (now on to the third) and a broken bolt. The optic came with a very nice lens pen when I first got it, but that has long since disappeared. The lenses were cleaned with spit and a wad of my t-shirt when needed but did receive the occasional proper cleaning. If the lenses have been scratched by that, I can’t tell. It’s mounted to the rifle with a LaRue SPR-E mount, which brings me to one of the big pluses of this optic: it has a very forgiving eye relief.

The eye relief variance where the shooter can easily see the whole field of view is from around just under 3” to about 6”. I also find my eye doesn’t have to be perfectly behind the optic to get a sight picture. There is a little bit of variance where my eye can be a little left or right and still have a sight picture. When shooting from different positions, around/under/over things from non-traditional positions, it makes getting a functional sight picture just that much faster and easier.

My Accupoint has the triangle post reticle. It is almost exactly like the picture on their website, except the two black lines that extend up to the triangle are closer together. I like the clean visual and the simplicity of the triangle.

It’s like having a magnified front sight post. I’ve found when using reticles that have criss crossing lines and/or circles, I ignore everything except the center of the reticle anyway, so I’d rather not have the rest of it there, cluttering up my view. In reviewing on duty law enforcement patrol rifle shootings and my experiences at the National Patrol Rifle Competition, most shots fired will be within 200 yards. A few times a year I have the opportunity to shoot at a military range that has a 300m pop-up course. I find I prefer the simple triangle reticle then as well because the 300m target is difficult to see as it is green and blends in well with its surroundings. Having a distinctive triangle reticle makes it faster to get on target when the target blends in with its background. When I’m shooting the 300m targets, I know at that distance the base of the triangle covers 13”; it’s also 13” tall at that distance, with the target being about 24” wide, so I just aim and hold off accordingly based on wind speed and direction.

Definitions of “short range” my vary, but the Trijicon Accupoint consistently performs very well at the ranges our reviewer employs it.

Trijicon markets the Accupoint scope for “shorter range shooting.” I’m not sure how they define that, but if I had to make a shot on a guy driving a moving vehicle 50 mph at 300 yards, into a 30 mph full value wind, it might be a little more difficult to make with this reticle, but that isn’t what it was designed for. It has performed excellently for everything I have needed it to do; from perimeter observation on patrol, 200 yard head shots at the NPRC, 300m popup range at the guard base, shooting quickly for smallest group size at various distances, as well as quick and accurate shooting at close, room distances.

The reticle is powered by fiber optics and tritium, so it is “always on.” I usually keep the rotating cover for the fiber optics mostly closed, to reduce the amount of sunlight energizing the fiber optic. That way I get a bright enough sight picture for fast, short range shooting, but still maintain a clear point for precise aiming. When the rotating cover is turned to allow too much light in, on a bright sunny day, the triangle can become a yellow blob and the precision of the point is lost. Not once have I wished the optic was brighter, the triangle has been easily visible in all conditions, from sunshine, overcast, raining, to night shooting, and I never have to change a battery. In very low light, the tritium takes over and keeps the reticle substantially bright, and should you find yourself illuminating a threat or area with a high lumen light, the reticle shows up as a perfect black triangle against your brightly illuminated threat or target. You don’t have to worry about having it turned down “too low” because it’s dark out and not being able to see it quickly when downrange is brightly illuminated.

I like the precision of the triangle as an aiming point. It’s not a dot or a donut. Even a 2MOA dot, while small, still covers 2 inches at 100 yards, the larger the reticle, the larger the group. Just like shooting pistol groups at 25 yards. If you give yourself a piece of copy paper to shoot on and try to shoot your best group, then do the same exercise at a playing card, odds are you’ll have a smaller group shooting at the playing card. The tip of the triangle is tiny, it is a point. I find that having a precise aiming point produces excellent groups even with practice 55-grain ball ammo.

The model offered currently from Trijicon is 1-4x, where mine is a 1.25-4. That extra .25 power up close with both eyes open is not distracting, so if you have a chance to pick up a used one, don’t hesitate.

The windage/elevation adjustments are protected by screw on caps so they won’t get moved unknowingly when it gets banged against the 6’ fence you just had to climb over.

I don’t profess to have any skill when it comes to photography, but I wanted to give readers some idea of how bright that triangle can be, it wasn’t even in direct sunlight (which would have made it a yellow blob unless the fiber optic cover was closed).  You can see the rifle is in the shade on a sunny day, with the fiber optic cover partially open, and then closed in the last one.  The low light pictures are taken in a bathroom, first with the door just cracked and no extra lighting, and the second was taken in a totally dark room with an activated Streamlight TLR-1HL(600 lumens).  I had to turn the brightness of the photo way down else the lens wouldn’t pick up the triangle, but the point was to show that even with a total overdose of auxiliary lighting the reticle will not get washed out as red dots can do if they aren’t bright enough.  It stand out big time in the brightest and dimmest of light.

Although I recently had to send my Trijicon Accupoint back for a repair, that has not changed my positive opinion at all. After years of use, I was just thinking I ought to send it back in for a checkup. It seemed to have a little bit of dust inside if I looked at the lenses from an angle. Not a week after I had that thought, the rear lens became loose, changing my point of impact by an inch at 25 yards. I called Trijicon tech support and they advised me to go online and get an RA number. I did so, shipped it off and it was returned fixed, within about 3 weeks from the day it left my door to the day it returned. The lenses appear to have been replaced and it’s solid. I installed it on my rifle yesterday, confirmed zero and at 50 yards, proceeded to put round after round of Winchester white box in a 1” circle.

Trijicon now makes a 1-6x model with the same reticle and I’m currently saving my pennies for one. It’s not as heavy as other 1-6x offerings, doesn’t use batteries, and for LE I think the reticle is perfect.

Last, but most certainly not least, they are made in America, Michigan to be exact. If you have any reservations about this optic, banish them.

What’s on your patrol rifle?

Other articles about tactical scopes.

About the Author: Mad Duo Kim is a native of Themyscira and a veteran LEO of many years service. A peculiar melange of hawt and damn dangerous, Kim the President of the WTA, a featured instructor for the Women’s NRA and currently serves as the Rangemaster (Rangemistress?) of a multi-jurisdictional training facility. In short, she is more woman than you will ever have and more man than you will ever be. Read more about her here.

Learn more about the Women’s Tactical Association here on Facebook. 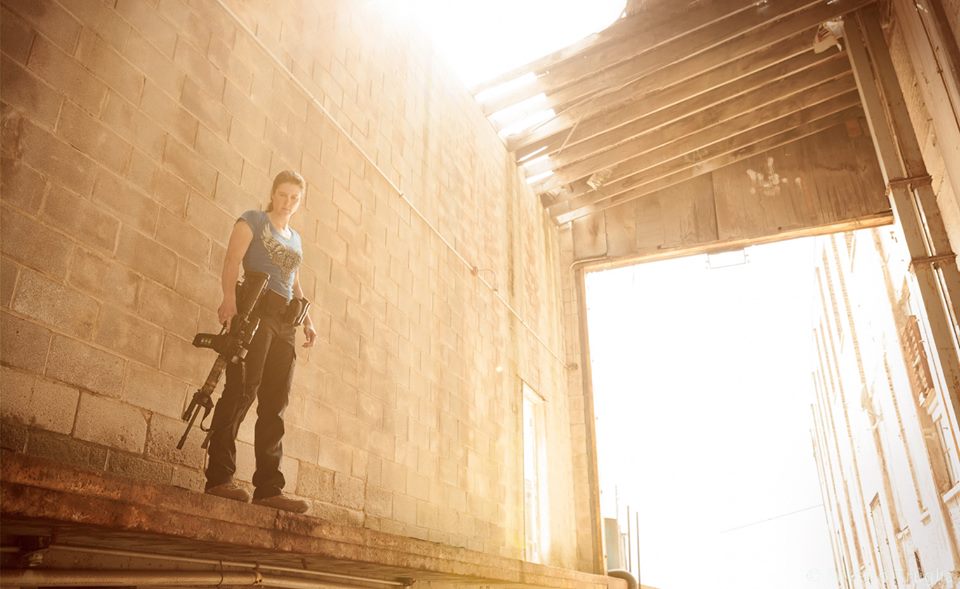