The Japanese Type 97 Anti-Tank Rifle would have really sucked to hump this through the jungle. Its development was understandable, if myopic, and the felt recoil (which would beat the living shit out of you) made it about as fun to shoot as a sawed-off punt gun. But what do you expect from a shoulder-fired 2500 gr. projectile? 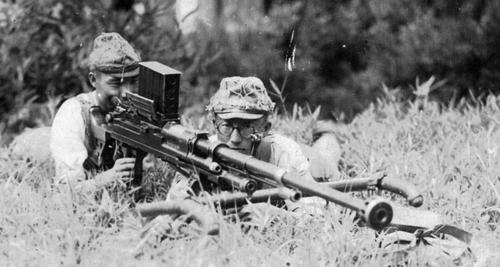 This article was originally published on April 16, 2014.

Imperial Japan was notorious for producing some of the strangest small arms of the Second World War, not least for taisensha sento (anti-tank warfare). Machine guns fed by stripper clips and machine guns (and submachine guns) with bayonets are two of the better-known examples.  However, one of the strangest was a massive 120-150lbs 20mm semi-automatic anti-tank rifle known as the Type 97.  The utility of this weapon system was questionable at best, as it weighted some 150lbs and required a three to four man crew to carry it. Similar weapon systems would utilize wheels or skis to aid in movement. Even more questionable was the need or actual application for such a system in the close quarter jungle warfare that encompassed the War in the Pacific.

To better understand the necessity for adopting such a weapon as the Type 97, the operational requirements for the time period must be discussed.  The Imperial Japanese Military had gained experience in the earlier Sino-Russian War and through observers, during the Great War or World War I.  The early fighting in the Second Sino-Japanese War beginning with small-scale actions in the early 30s also molded Japanese doctrine.  Although used during World War II, the Type 97 began development in the late 30s and was a product of that era’s military theory.  Remember, this is before commonly known World War II tanks such as T-34, Tiger or even more modestly armored vehicles like the Sherman.

During this time period, the vast majority of tanks were susceptible to small caliber cannon fire like the 37mm or depending on the vehicle, even 20mm.  Also, the Japanese having knew the terrain they would be operating in; they knew that larger tanks would not be suitable for closed terrain and unimproved roads or bridges.  Due to this the Japanese, like many other countries including Italy, produced very light tanks referred to as tankettes.  These tankettes would usually be crewed by two crewmen and would operate a machine gun or light cannon as their main armament.  For readers more familiar with modern armored vehicles, the German Wiesel Recce/Recon vehicle is very similar.

As the Japanese focused on this class of armored vehicle for their own use, it is understandable (if short-sighted) for them to prepare to fight similar vehicles.  These tankettes would have been highly susceptible to the 20mm round fired by the Type 97.

The Type 97 fired a 20x125mm round and had a gas operated open bolt operating system.  Development began in 1937. Production ceased in 1941 with 1,200 units produced.  The weight of the weapon was a staggering 120lbs. With the issued metal shield mount this increased to 150lbs.  To compensate for the weight it was issued with handles; this facilitated carrying it from position to position.  Besides being so heavy the weapon was also 82.5 inches long (not counting the carrying handles).

The weapon fed from a top mounted 7 round magazine.  Armor penetration at 250m was 30mm on a 90 degree angle.  There was some controversy over whether the weapon fired on full automatic, semi-automatic or was select fire.  According to contemporary U.S. Army Training Manuals (TMs) it was select fire. However, some dispute was spawned by the similar Japanese Type 98, which could fire fully automatic.  According to captured systems, ammunition was armor-piercing tracer (APT) and high explosive tracer (HET).   During firing the whole barrel and operating group recoiled back into the receiver assisted by a recoil dampener.  A muzzle brake was also used to decrease felt recoil.  The weapon also did not have a mechanically assisted charging handle so the handle itself was a massive unit. 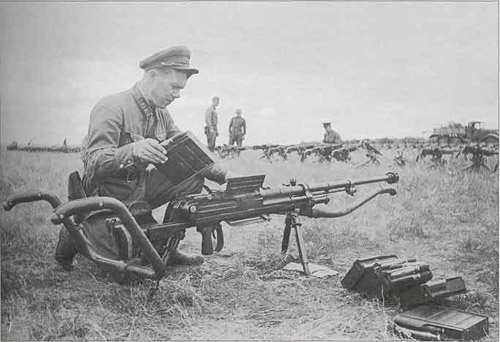 During its early use, the Type 97 was effective, if used against the type of armor it was designed for. One must keep in mind that early U.S. armored units included the lightly armored M3 Stuarts, which would have been vulnerable to the Type 97. However, later tanks like the Sherman were a different story.  Against any vehicle with more armor than a tankette or light tank, the 20mm rounds of the Type 97 were ineffective.   Lack of sufficient armor penetration to deal with the vehicles Imperial Japan was encountering, couple with a weight heavier than anything short of a small artillery piece made the Type 97 anything but popular.

The weapon also had another problem for the poor crews who manned them; its recoil almost beyond what the human body could endure.  Even with the recoil buffer and muzzle brake the Type 97 was horrible to fire, especially for smaller framed troops like the average Japanese soldier.  With all of these negative attributes, the Japanese eventually came to the same conclusion that other armed forces had; the anti-tank rifle was a dead end in small arms development.  There is little information regarding use of the Type 97 as a general anti-materiel rifle, but in the close quarters of the Pacific, this use would likely have been limited at best.

Despite its shortcomings the Type 97 continued in service. It first saw action with the Kwangtun Army against lightly armored Soviet armor in Manchuria and Mongolia, was deployed in China (including fighting the fighting around Hong Kong), and later in defense of Japanese-held locations during the Island Hopping campaign. In the latter theater, the Type 94, 37mm Anti-Tank Gun (often deployed in companies assigned to “Independent Rapid-firing Gun Battalions) was muych preferred.

The weapons would have ideally (with its crew) deployed in four anti-tank rifle platoons (per battalion), each with two sections of one weapon each, parsed out to individual infantry companies. Fully manned these sections would have consisted of an NCO, four gun crewmen, four ammunition bearers, two horse-handlers, and 9 horses. This is, of course, in an ideal TOE, sustainment of which especially during the final years of the war would have been virtually impossible.

Learn More About It

Your first stop, obviously, should be Forgotten Weapons. Read Japanese Type 97 by Christopher Bailey on ForgottenWeapons.com.

“As the projectile traveled down the barrel at 2,640 feet per second, some of the propellant gas was diverted into a regulated gas tube assembly located underneath the barrel. The gas acted directly against two integral gas pistons on the bolt carrier, forcing the bolt assembly to the rear and unlocking the gun’s action. The fired case was then extracted by the bolt and thrown out the bottom of the gun by an ejector mounted in the top of the receiver housing. Once fully to the rear, the sear would again catch on the bolt carrier, locking the action open until the trigger was pulled once more. Simultaneous to this internal action, the whole barreled action would cycle both forward and to the rear, its movement being slowed by the recuperator system mounted in the lower receiver. This additional complexity served to somewhat soften the recoil experienced by the shooter.”

“Interestingly, the Type 97 was initially designed to be fired from the operator’s shoulder. As the average Japanese soldier of 1941 weighed less than 150 pounds, this proved to be both dangerous and impractical. The recoil force was so fierce that firing the first shot caused the soldier to take some quick steps backwards. When fired from a prone position, heavy bruising was almost always guaranteed. Also, the recoil created so much pain that, even though the weapon was semiautomatic, follow-up shots were very slow in coming. A muzzle brake was fitted, but did little to tame the ferocious recoil. The Type 97 was designed in 1937; however, by 1942 the rifle was relegated to strictly a defense weapon.”

“You don’t hear much about Japanese anti-tank warfare. In part this is because, by the time Japanese forces were about to fight Allied tanks, they were logistically starved, down to eating tree bark, and, in some of the last island campaigns, their own and American dead.

The 1200 Type 97s made were scattered across the Greater East Asia Co-Prosperity Sphere. You couldn’t count on a supply of special anti-tank ammunition. Anti-tank tactics, for the retreating Japanese, involved infantry swarms on isolated tanks, or use of anti-tank artillery or general purpose field guns in direct-fire AT engagements.” 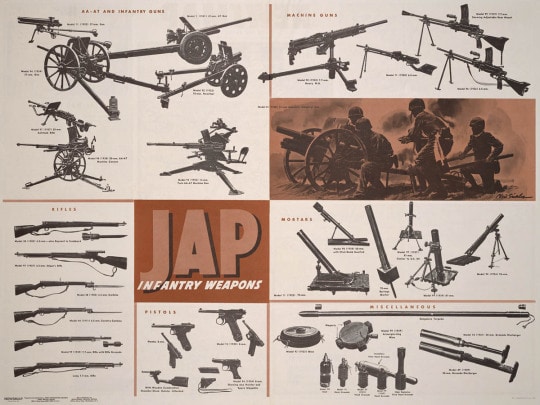 “The graphic above is a breakdown of the Japanese Empire’s main small arms and infantry weapons during World War Two compiled by the US Army Information Branch for an edition of Newsmap.  The graphic includes not only the pistols, rifle and machine guns used by the Japanese but also their light artillery, mortars and Anti-Tank guns.  While the graphic labels most of the weapons as ‘model’ the more commonly used description is ‘type’.  The numerical designation of Japanese weapons usually comes from the year of the Emperor’s reign in which the weapon entered service.  For example the Type 41 was introduced in the 41st year (1908) of Emperor Meiji’s reign (1867-1912). “

Two or more Breach-Bang-Clear staffers contributed to this report. 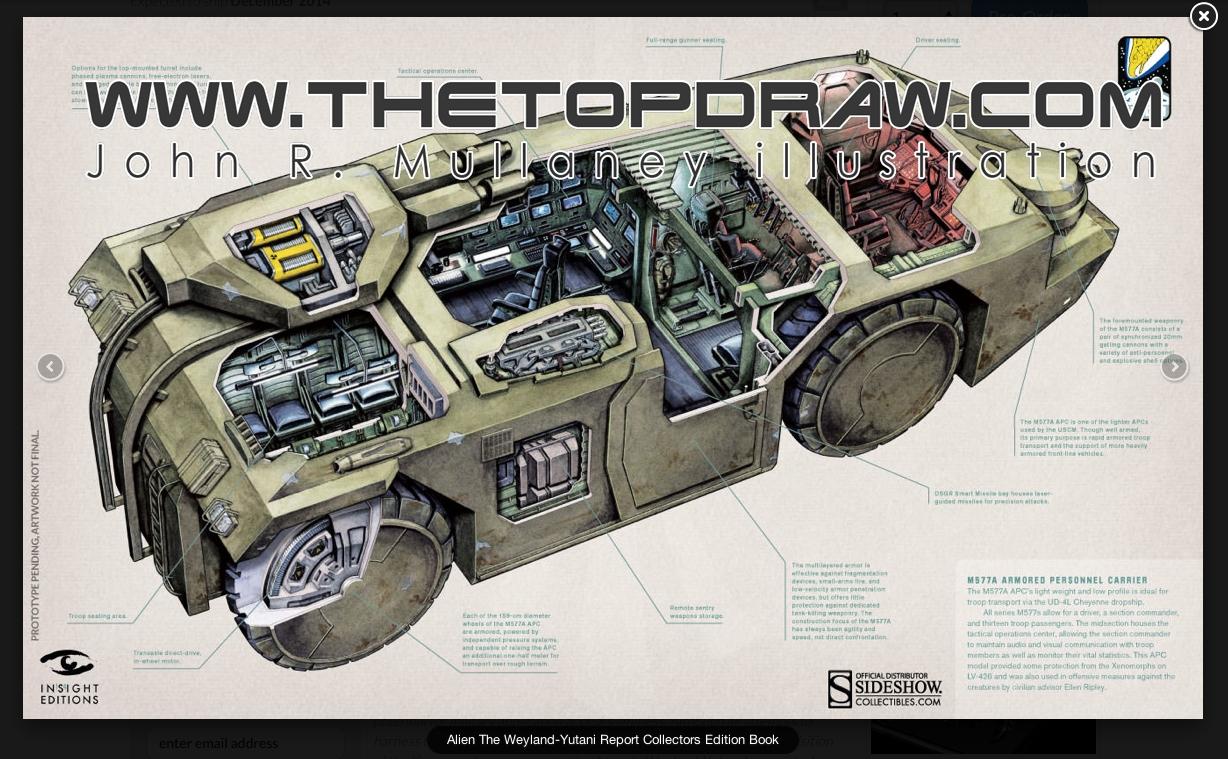 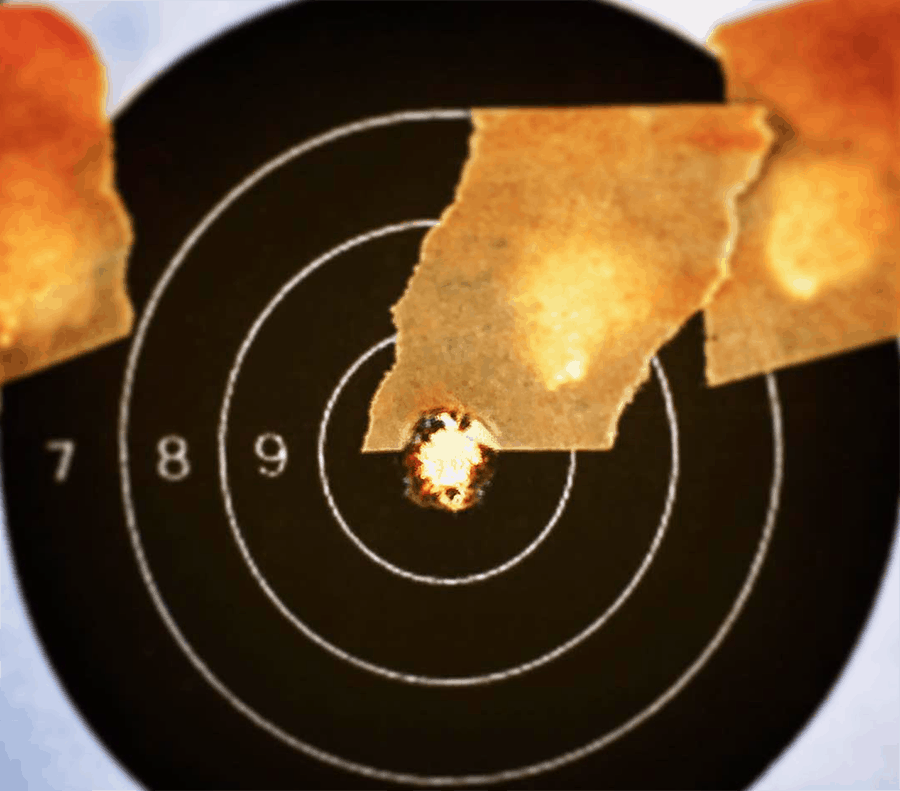 Train on a budget with focused low round count range exercises 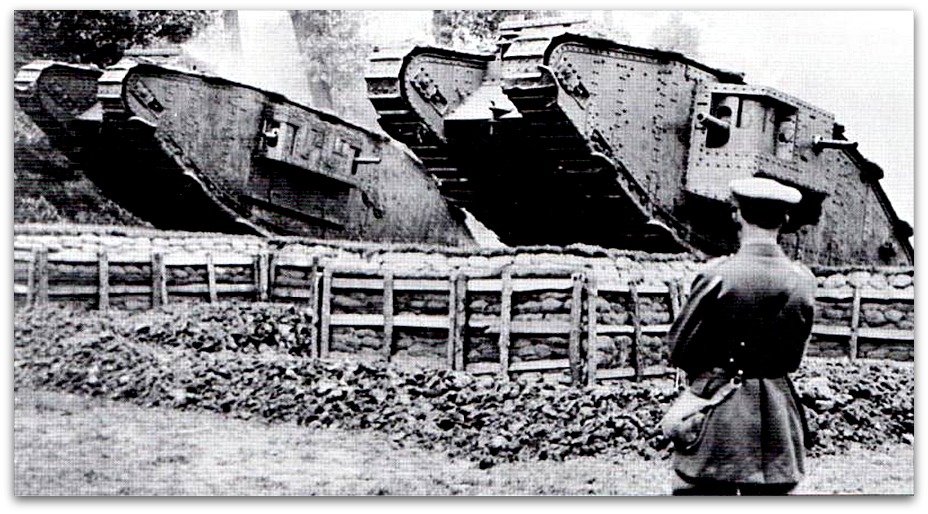