A Flashlight That’s Smarter than You | The Surefire Intellibeam 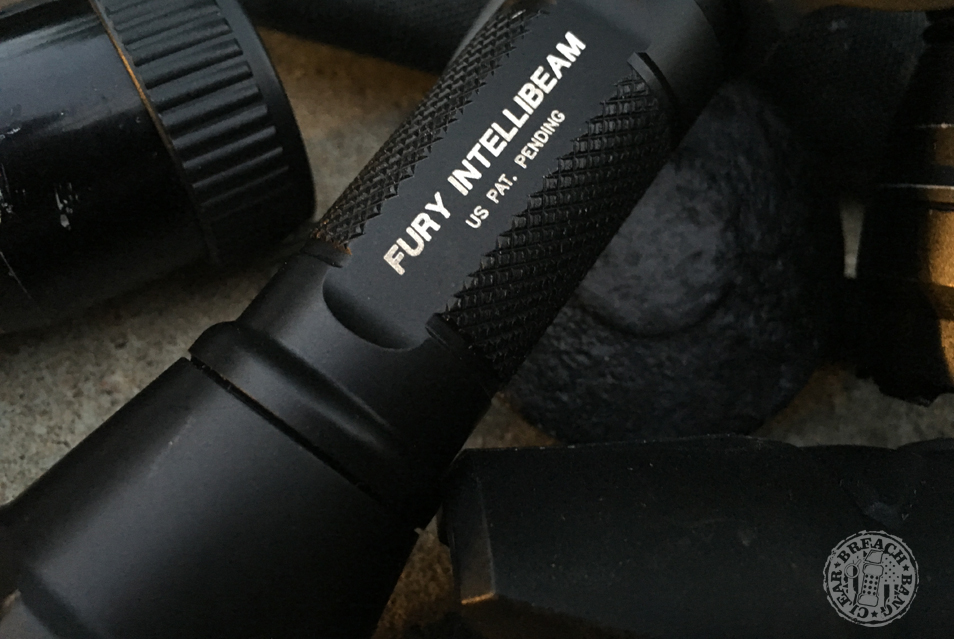 News of the Surefire Intellibeam was met with a mixed response when it came out. Most was conjecture-based decision making — which is usually foolish — and more revolved solely around cost. The latter is frequently a source of contention with new products, and occasionally devolves to derision. More often than not the loudest declamations come from people who understand the least about the product — but that is a rant for another day. I was professionally intrigued by the Intellibeam’s potential from the moment I heard of it and now a couple years later it turns out I was right to be so. I’ll explain why. But first, a story. Once upon a time in a land far, far away (it was a place that rhymed with Oklahoma) there was a man who attended a low light class. This was in the halcyon days before OIF I, long before Kanye arrived (making me want to punch him in the face) and Firefly departed (making me want to punch network execs in the face). Young soldiers still knew how to polish boots, UCP was still a brand new horror and Bruce Jenner had yet to give up his cock’n’balls. That man thought he was fairly squared away. He’d been a MOUT instructor for years, had trained with LAPD SWAT and NYPD’s ESU, JTF 6, some NSW units, BORTAC, USMS SOG and FBI HRT. He reckoned himself fairly squared away and wondered as he drove north to Kansas City what they could possibly be teaching him about using a flashlight that would take an entire week of 12 hour days — but he’d been taught to be a sponge when afforded the chance to train and to always have an open mind. 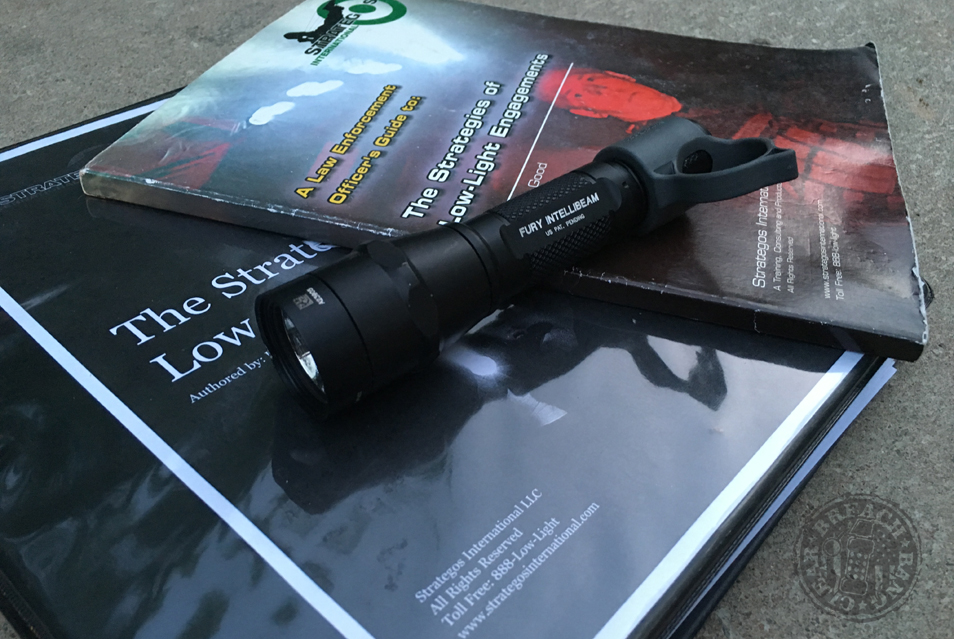 By the end of the first day he’d been well and truly reminded you don’t know what you don’t know until someone tells you you don’t know it. By the end of that week he had a fierce and terrible regard for the importance of light use and light technology, understanding there was far more to a light and its use than just turning it on and shining it around. That never went away. He’s been gay for flashlights ever since. Fast forward a decade and a half or so and that man — it was me, surprise! — find himself at Surefire HQ in California first listening to a mad scientist (Dr. Peter Hauk) in awed fascination, then going over a number of different products with their development and marketing team. Among those products was a “smart” handheld light that would adjust itself to environmental conditions and proximity. It was still more than a year from production, but it worked. It was (pardon the pun) brilliant. “The sensor has been specifically chosen to mimic how the human eye responds, so what is bright to you is bright to the light and it adjust accordingly.” –A really smart Asian guy at Surefire whose name I cannot remember I’ve wanted a Surefire Fury Intellibeam since I first laid eyes on the prototype back in 2014. I recognized immediately the advantages it would provide, particularly as it evolved. The first iteration is a pretty good sized handheld, by modern standards (vs. those of the D Cell Kel-Light tonks we used when I was a rookie). That won’t always be the case. As technology evolves the size will be reduced — and soon we’ll have them on WMLs, which is going to be badass. 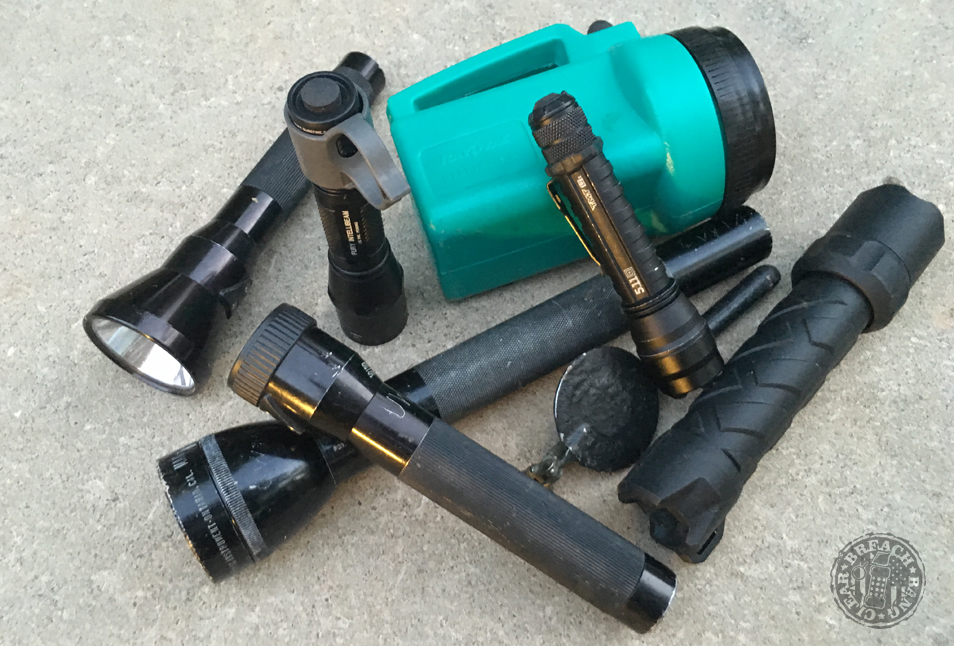 Flashlights come in all shapes and sizes, and they’re evolving at a frenetic pace.

If you’re not familiar with it, the Intellibeam is, for lack of a better term a smart light. It uses a sensor, a microprocessor and Surefire’s variable output capacity to constantly adjust its brightness to what’s around it — simply put, it reacts to the environment and ambient light levels. This means, for instance, that it will dim itself down if it realizes it’s in close proximity (to a wall, for instance, during a house search, or a ticket book on the side of the road) and brightens in intensity the darker it gets; and it actually manages to do so almost without a perceptible transition. The Surefire description describes the transition as seamless, which is a bit of exaggeration but is effectively accurate. If you’re watching for it you’ll see it, but it won’t impact the user. It cranks out 600 lumens, runs on 2 x 123A batteries and is big enough to tuck under your arm or whack someone in the head with it but not so big that most people couldn’t carry it in their pocket. 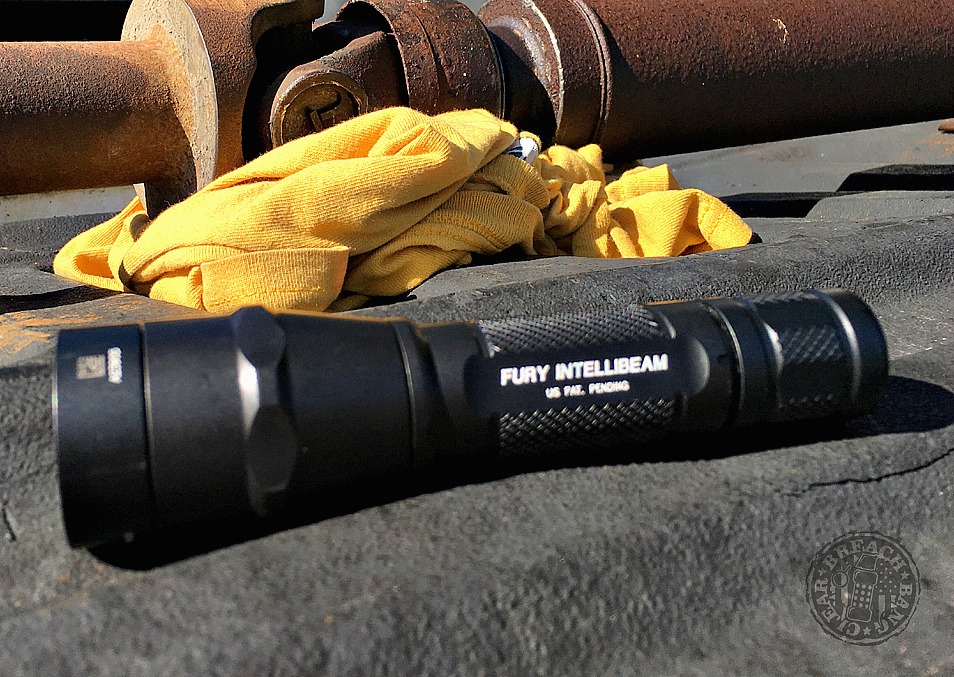 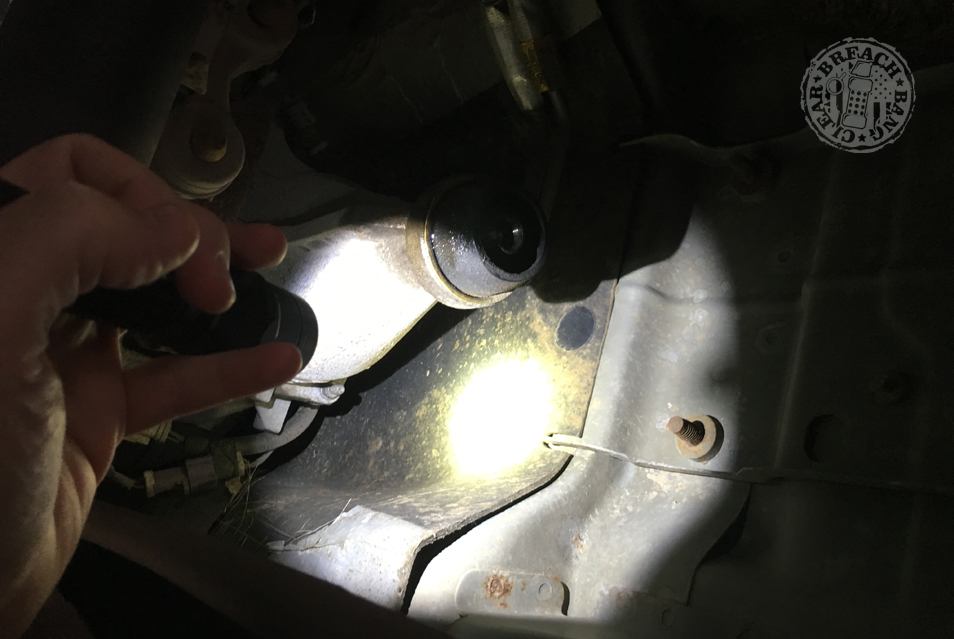 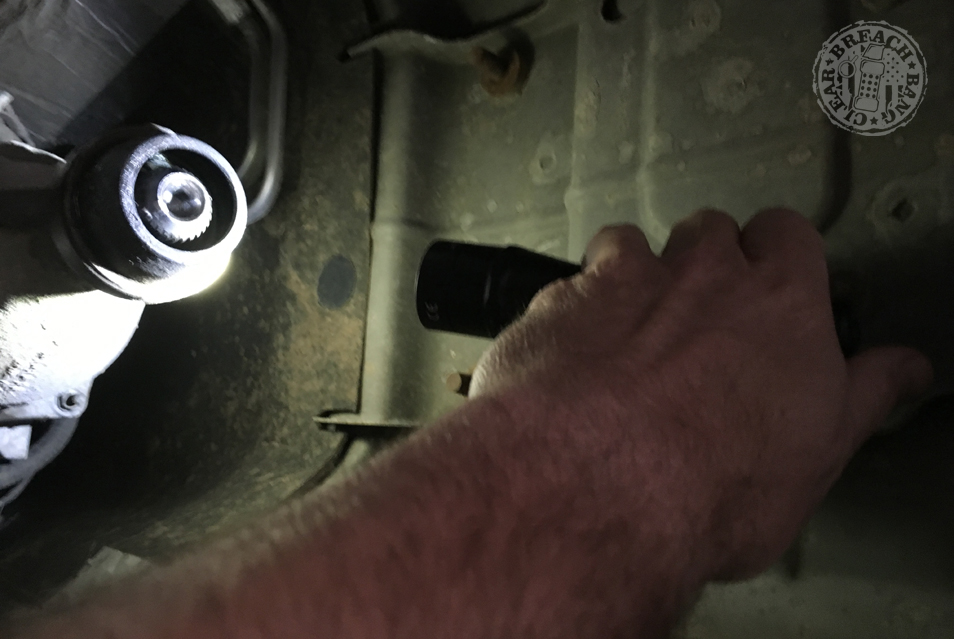 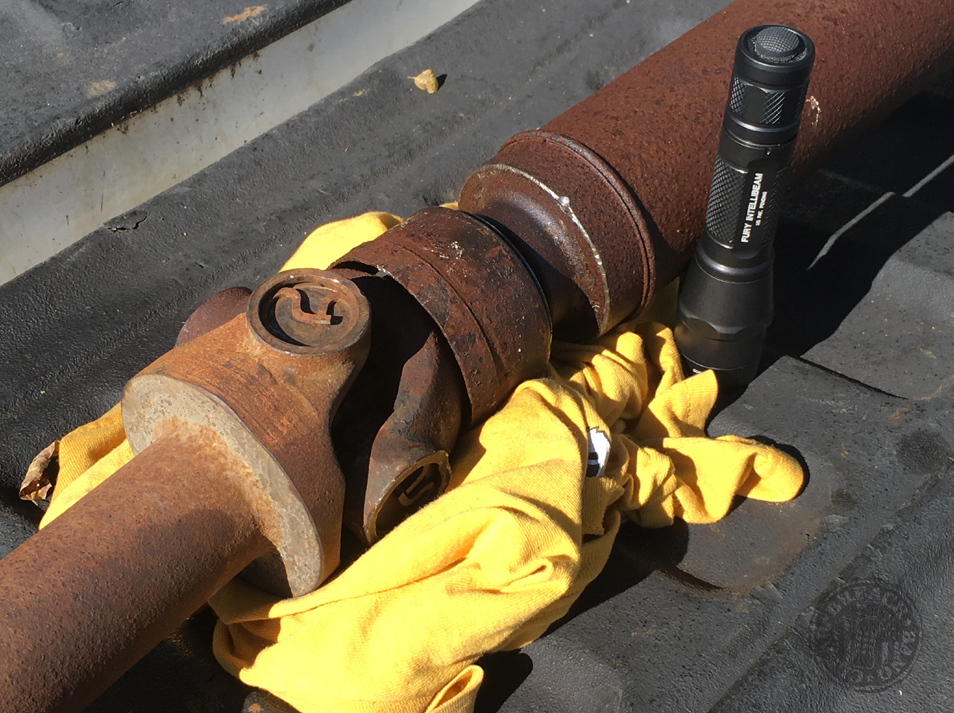 I’m not going to do a video showing how the light adjust to its surroundings, COWAN! already did that. I’ll just say it works, and it works very well. Here are a few of my thoughts on it now having used it for several months.

↑ Intellibeam. The advantages of this are many, particularly (though not always) in a “tactical” context. Light splash is bad if you’re searching a structure, but it’s also pain in the ass navigating unfamiliar or difficult terrain and working under your vehicle on the side of the highway at night too. ↑ Versatility. You can command it to use the sensor or switch to constant full power. ↑ Toughess. It’s built with the sort of quality control I expect from Surefire. I’ve dropped it from shoulder high, kicked it and left it outside in rain accidentally, etc. and seen no ill effects. Great durability and dependability. ↑ Size. Big enough to use in extremis as an impact weapon and tuck under and arm. Small enough for many people to carry in a pocket.

↓ Batteries. It runs on 123s, which aren’t always easy to get hold of. Not a big issue for me, will be for some. ↓  Battery life. Mine devours batteries. Duration isn’t terrible, but beam intensity does seem to weaken more quickly than some of its cousins. Not a deal-breaker, but does mean I only use it for specific reasons, just not as a task light. ↓  Intellibeam. The proximity sensor is a disadvantage if you fail to switch to full power before using to put someone at a disadvantage. You’ll have to remember to make the change before burning someone in the face in a violent encounter. That’s not always easy to achieve under stress; it might not be easy to do if startled or trying to process other matters during fight or flight conditions. ↓  Price. MSRP is $229. This is going to put it out of reach even for some guys who recognize the efficacy and practical application. It will dissuade others who will prefer to wait until it’s more field proven or moved on to some sort of second generation. I would buy one, as would many of my peers and friends; others would not, for righteous reasons. That’s a lot of money for a flashlight you’ve survived this long without. ↓  Size. It’s right on the edge of being too big to clip in my pocket. It is too big for some people to comfortably carry in their pocket. ↓  Pocket clip. It doesn’t have one — which is why mine (like most of my lights) is equipped with a Thyrm Switchback (as all my lights will be someday, hopefully).

This is a great light, but it is not currently my pocket EDC light. Let me clarify: I have it with me every day, but my pocket light is now a very old and extraordinarily reliable little 5.11 light I picked up something like 5 years ago (more on that later). I’d actually retired the 5.11 light to my glove compartment when I picked up a Surefire Backup last year, but then I lost the Backup last month while teaching in Maryland. *sigh* In any case, my Intellibeam rides in a Grey Ghost Gear Throwback I carry everywhere with me as a road bag because for my requirements that is sufficient. Your needs may vary.

Should you buy one? That’s gonna depend on your disposable income and your need. If I was still working the road or in the military I’d buy one, though I’d have to save to do it. A couple of my peers have purchased one after I encouraged them to do so. A couple others put it on their Father’s Day gift list (come to think of it, it might be on my sister-in-law’s Mother’s Day wish list too). My cousin told me he was going to buy one (and get his Glock customized) but I dissuaded him. He was, I thought, more likely to benefit from applying that money toward a good training course and ammunition. It’s all about context, practical need and resources. If you decide you want one, I can tell you its functionality will not be a source of regret. You can find out more about the P2X Fury Intellibeam right here online. 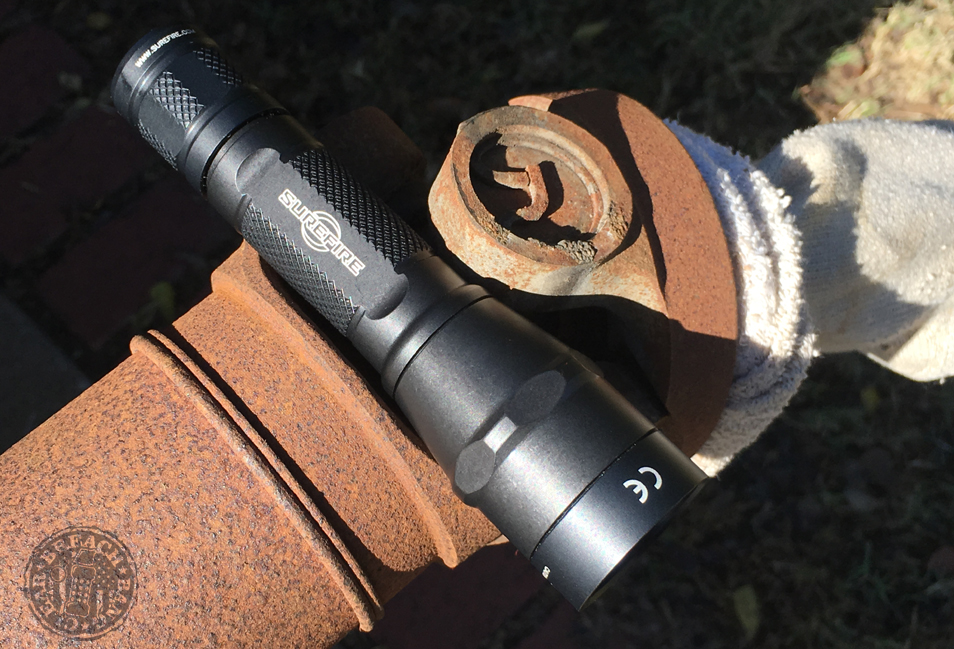 Overview of the Fury Intellibeam from Surefire

COWAN! on the Surefire Fury Intellibeam 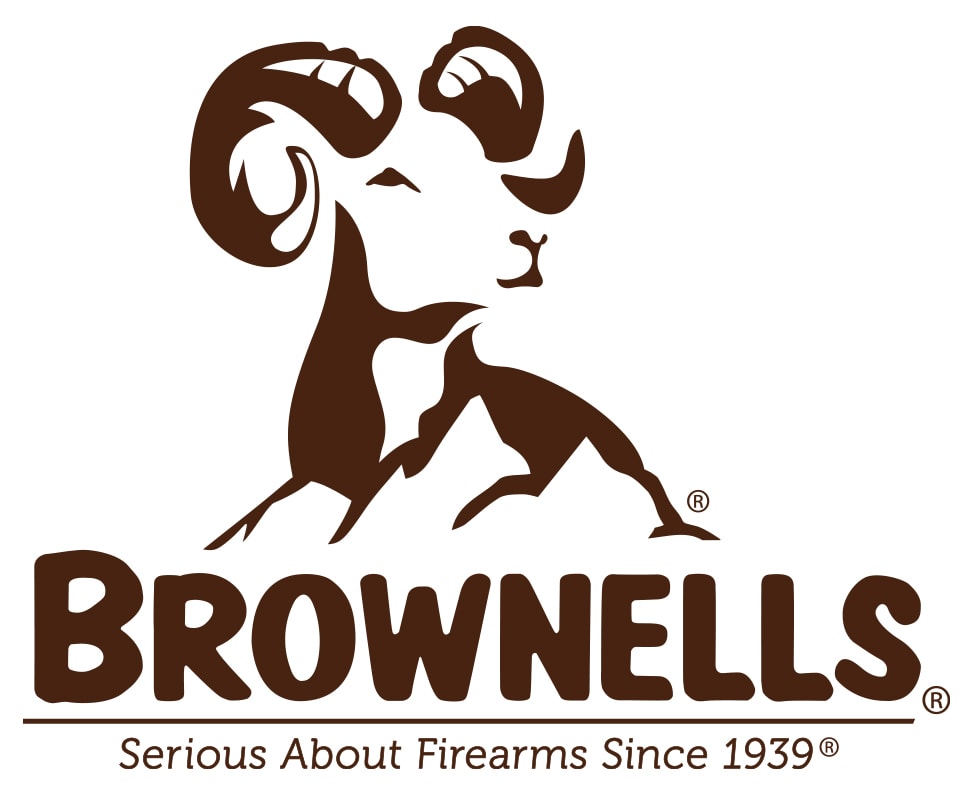