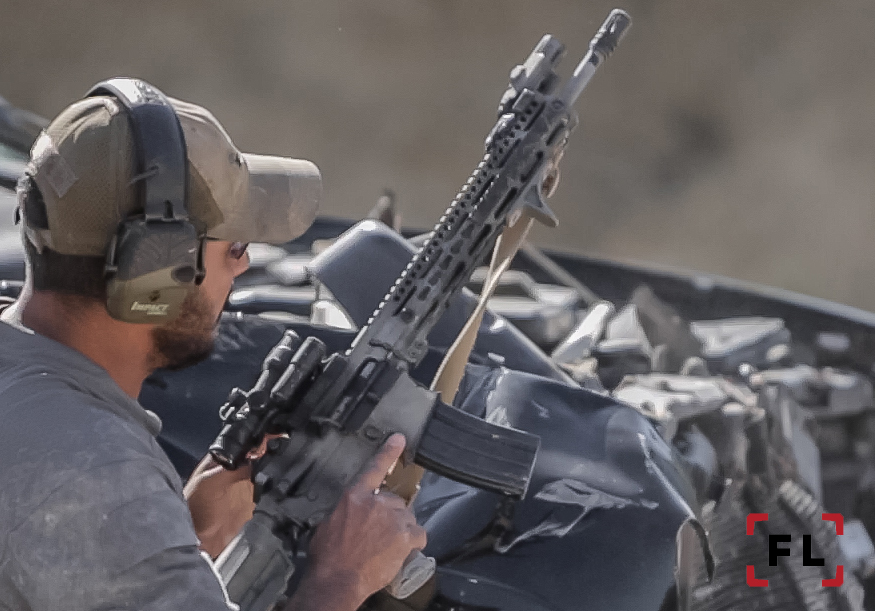 We love blasters the way fat girls love chocolate. Unless you’re visiting our site for the first time this should come as no surprise to you. Our minion Freddy has been beating the hell out of a blaster from Sionics (specifically a Sionics Weapon Systems AR15) for over 6 months now. He shot it during our VCQB class, out in the desert, on the range with some guys from the U.S. Army Weapons Intelligence Course and in assorted other conditions. Here’s what he has to say about it. Mad Duo

Getting a “boutique” quality rifle for anything less than the price of custom gun can be problematic. Like that extra spoonful of sour cream at Taco Bell, rifles often seem to cost an unconscionable price for what you actually get.

SIONICS Weapons Systems might be the right answer to that problem. The race in the black gun market in ongoing and SIONICS Weapons Systems is gaining ground. It’s an endurance race and the pack is thinning. The consumer of yesterday who blindly threw his clams at the latest buzz is gone. Today’s gun buyer is educated and expects more from this industry. SIONICS is meeting this expectation with attentive, highly adaptable product development and superb customer care. 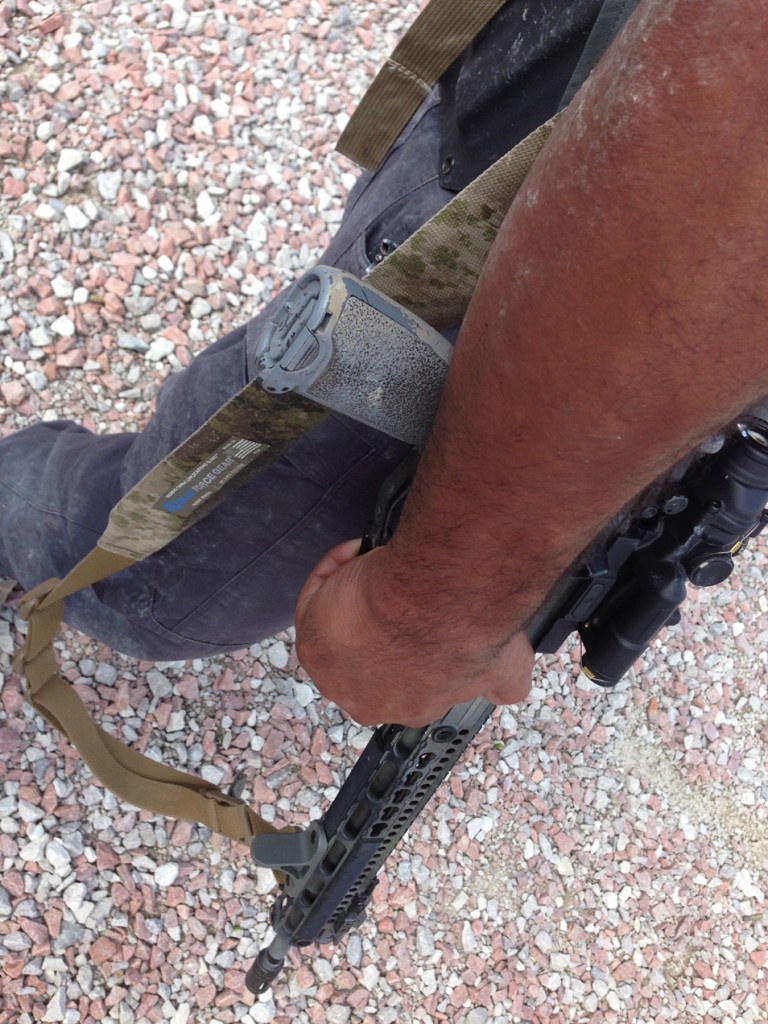 Three years ago I met Ret. SMAJ Joe Turner through Cochise County Search and Rescue. Joe and I immediately hit it off and started talking about guns. He was in the middle of accessorizing his SIONICS Patrol Rifle 3 XL. I knew very little about SIONICS at this time. Joe expressed his satisfaction not just with the gun but the people who built and sold it. Seeing this career soldier’s opinion, a man I came to respect, and choice of SIONICS for his first non-issue rifle made me want to know more.

One instance which really made me want to get involved with SIONICS was when he told me about getting his trigger replaced because of a worn sear. Josh at SIONICS not only replaced it for free, but gave Joe a CMC drop in trigger for his trouble (not their standard MO so don’t try it). When Joe went to pick up the gun the staff was friendly and respectful. Dealing with gun shops and especially gun manufacturers can be very intimidating for most people so instead of trying to push guns used-car style, SIONICS’ humble approach is to remain accessible and educate gun buyers. Their website exemplifies this. 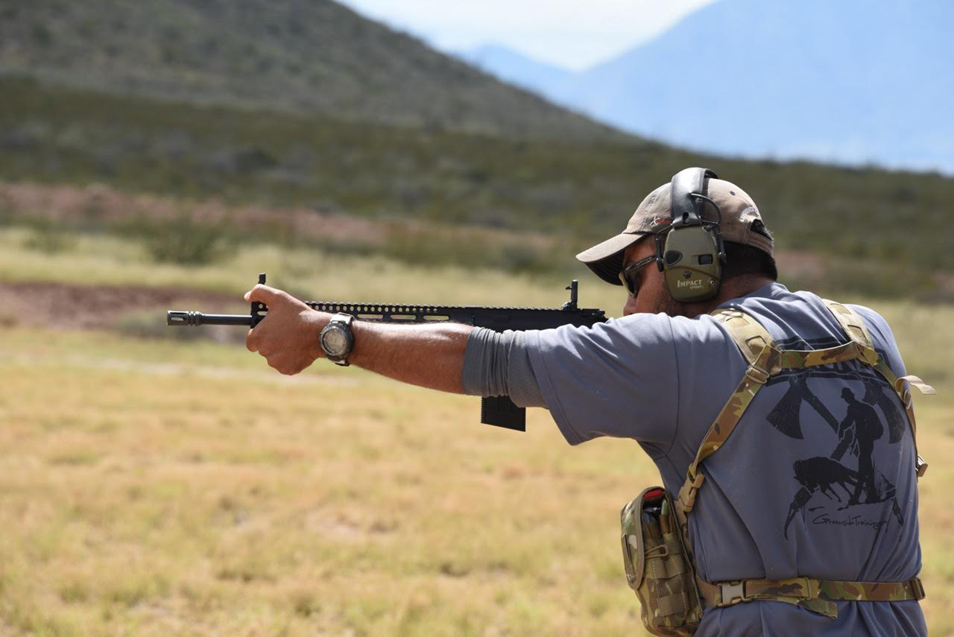 Earlier this year I joined assorted other Mad Duo Minions at a Will Petty VCQB Course up at 88 Tactical. Before going I reached out to Mr. Joshua Ellis of SIONICS and he offered a SIONICS Patrol III for evaluation during the class. If you’re not familiar with a Will Petty VCQB class, it’s rigorous. We beat the hell out of these rifles in many positions in and around various vehicles. Rifles were dropped, smashed against vehicles, punched through vehicle glass and abused in a number of ways. (I think Mr. Petty will soon be infamous in the Law Enforcement firearms training community for his mind blowing innovative approach to Vehicle Close Quarters Battle concepts, particularly his ballistic theory and “alphabet soup”).

Finally I would be able to go to a course I really wanted to attend and with a rifle I had a lot of interest in.

Let’s just say Mr. Will Petty had my equipment turned inside out by day 2, much as he did my brain. I can say that if my rifle had not operated as expected, especially when clearing Petty induced repetitive type 1 and 2 malfunctions, I would have been really screwed. My Patrol III kicked ass for me and was my beacon of light during one of the most humbling shooting courses I’ve attended. I returned to Arizona admittedly sad that I would be parting with the SIONICS that kept my head above water. I did not want to give it back. 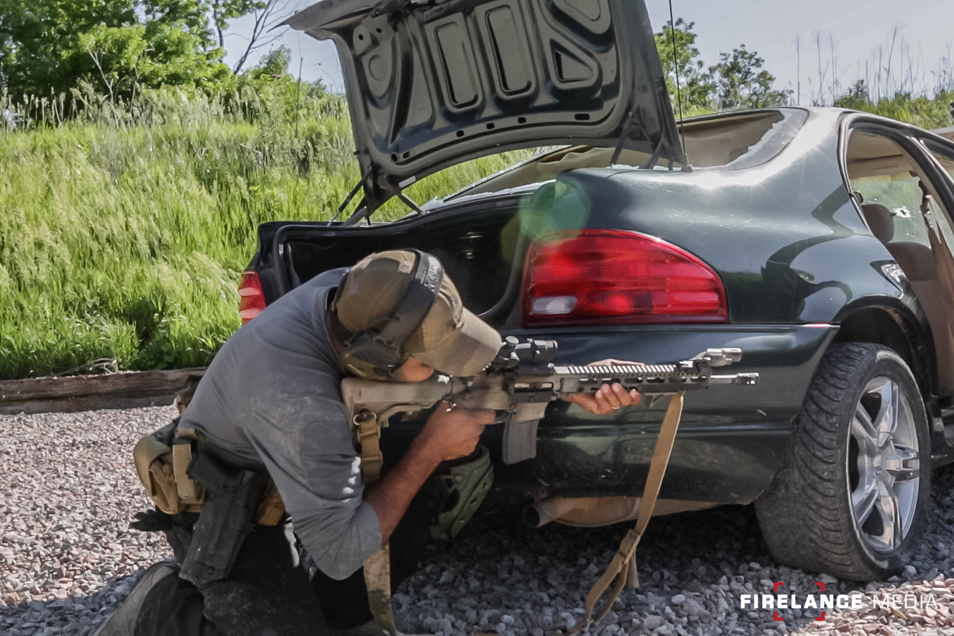 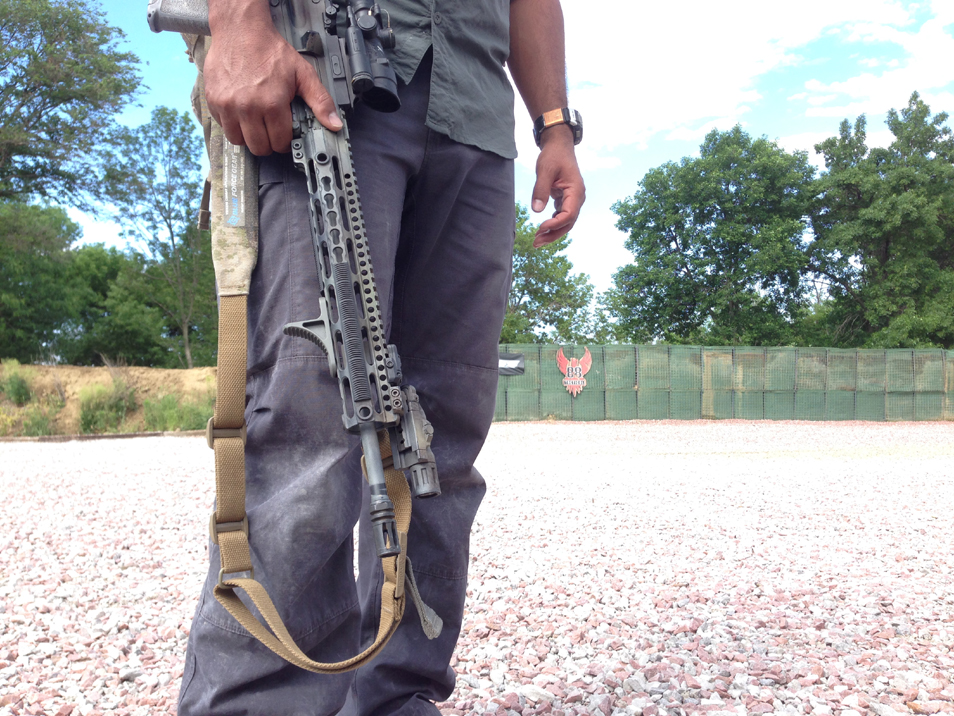 So what’s one to do? Why, schedule a SIONICS test and evaluation shoot with the guys from the esteemed U.S. Army Weapons Intelligence Course and Harris Tactical of course. In preparation for this article I decided to enlist the help of a really diverse crew. This would allow me to gain objective feedback from dudes that love shooting and blowing things up. We met Josh and Steve at the Sierra Vista Shooting Range for a great day of shooting. Joe Turner, Doug Napier and myself would put the group through a variety of events which allowed me to collect necessary data. I was also able to put in the hands of several retired SOF guys — all of them were visibly impressed.

SIONICS provided fifteen weapons for our shooting pleasure. First thing to do would be to get them in our hands and snap in, so everyone grabbed a gun and conducted dry weapons presentations while chatting about what we were experiencing. There were some remarkable consistencies regarding fit and function of the rifles. Some were canned SBRs and some had 16” lightweight barrels. There were SAR-15s customized with various finishes and others in plain black. The consistencies of comfortably balanced weight and ergonomics were noticeable. The selection of components from the Mid-West Industries SSK rails, ERGO Grips, and B-5 SOPMOD Bravo/Enhanced stocks, Impact Weapons Components QD End Plates all complement the quality of SIONICS Weapons Systems standard fare. Basically you can take all of these top name components and slap them on any platform but in the end you need to ask if Mr. Potato Head is playing dress up or are you dealing with a quality weapon? The upper and lower receiver compatibility was perfect, initial dry fire of the trigger was excellent on the single stage 6.5 pound pull set up. Most consistent and remarkable was the quiet smooth (dry) glide of the NP3 coated bolt. Take all the bells and whistles off and we still got a winner! 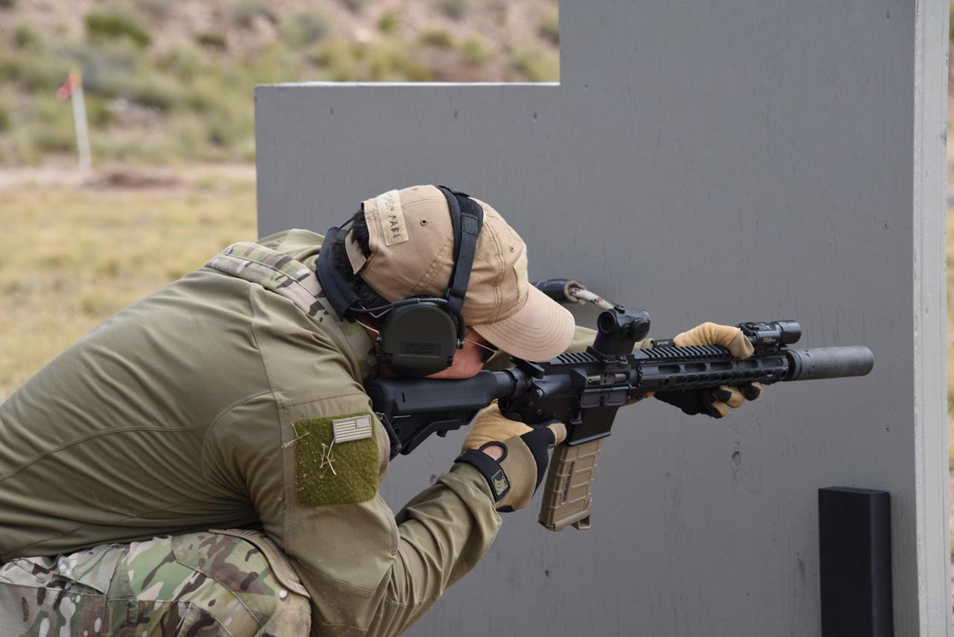 In order to get a thorough take on rifle performance to supplement my three day course with Mr. Will Petty I asked Doug and Joe to run a couple drills which our attendees were not expecting but no doubt would enjoy. First I gave a little common info on positions just so we could establish that no one was going to be doing cartwheels. Joe ran a barrier drill forcing students to fire from positions they may or may not have practiced in the past. This really emphasized sling and forward grip options and in this case most shooters found the abundant options and versatility found on SIONICS Rifles was appreciated. After running through the barrier drills we all ceremoniously watched as Doug singed the lone barrier defiling impact he was responsible for (could’ve happened to any of us). Doug then ran the group through a timed event testing magazine compatibility and accuracy. We all grabbed from a pool of loaded magazines which included 3rd gen P-mags, Lancer, USGI, Hex mag, others and no problems were encountered. All mags locked as advertised all day. Common trends and or comments made during and after these stages of fire were the crisp trigger pull/reset, as well as the recoil management. They just seemed to be really crisp weapons overall.

“Reduced gas port on suppressed Saker 556 was noticeable. You can feel attention was paid to making sure the gas properties were refined. This is a great thing!” Shaun McCain, U.S. Army Forensics

So how can I quantify for you what makes SIONICS an absolutely excellent value? I mean where is the true gain witnessed when comparing one rifle to the other? Well, it’s the sum of its parts that reveals its value my friend. The sum of a crisp mil spec nickel coated PTFE trigger and hammer, an NP3 coated bolt carrier group cycling smoother than your sister’s inner thigh. The chrome lined, X-Rayed and MP inspected CMV 4150 barrels. Ultimately this translates into the efficient performance of a machine. This performance results in speed and accuracy, and speed is absolute but accuracy is final.

SIONICS Weapons Systems is gaining ground and setting the bar. Numerous Law Enforcement Agencies nationwide trust in the dependability and performance of SIONICS Weapons Systems. Value for your dollar you’d be hard pressed to find a better deal backed by people who stand by their product and your patronage. With SIONICS you get a boutique rifle you’ll proudly pass down the family line, for a sub-custom rifle price. 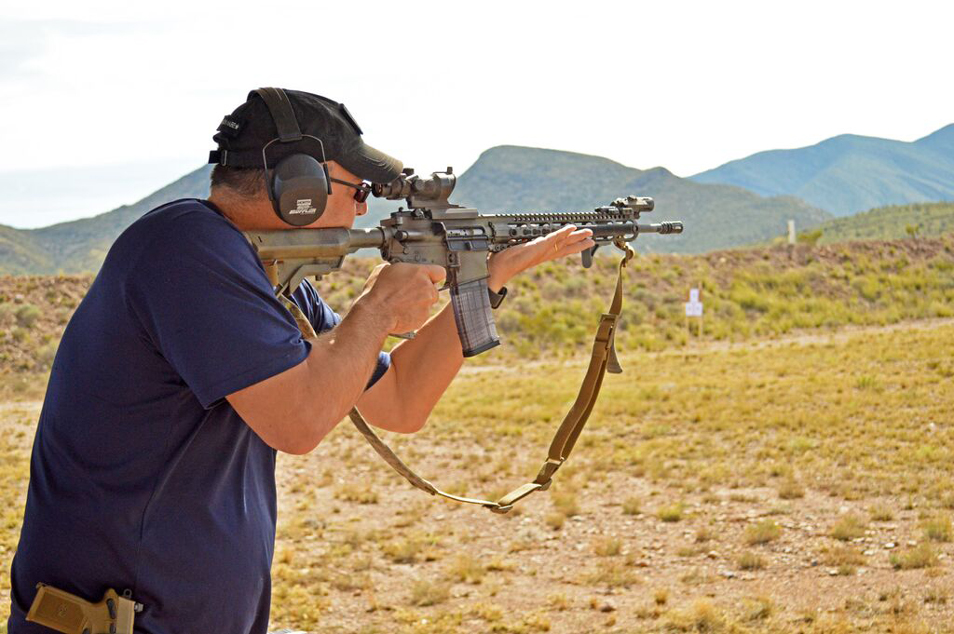 As I recall mine and Joe’s conversation three years ago in that SAR class, he wasn’t just another dude who bought a rifle. He spoke of his rifle intimately, with conviction, as if it were an important part of his family. I must admit this threw me off back then, but now I understand the SIONICS difference.

I’ll follow up in a few months with more info about how it holds up long term under gungy conditions. 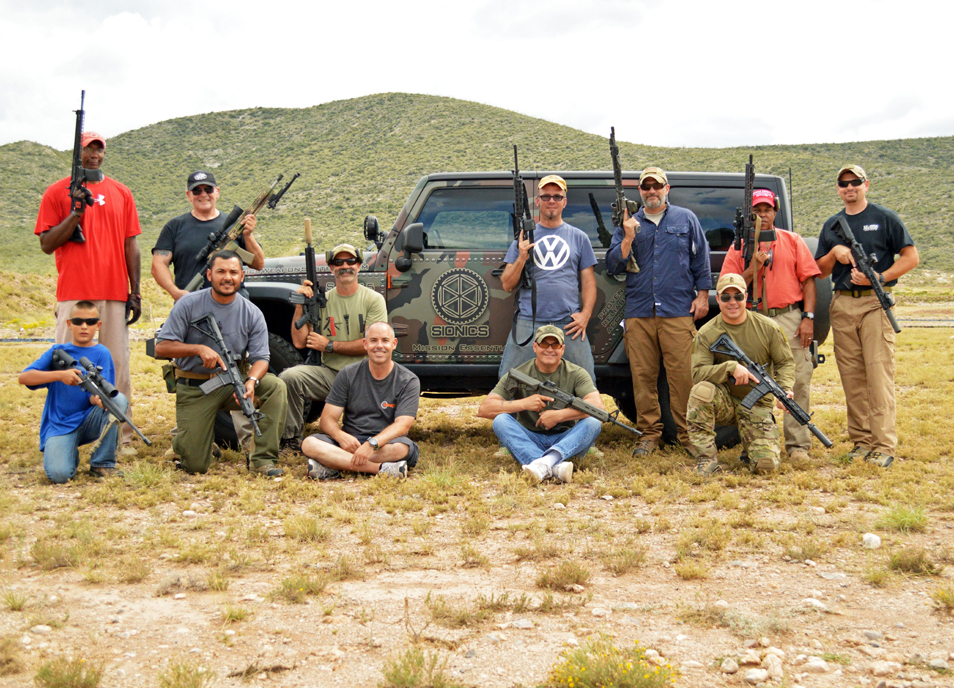 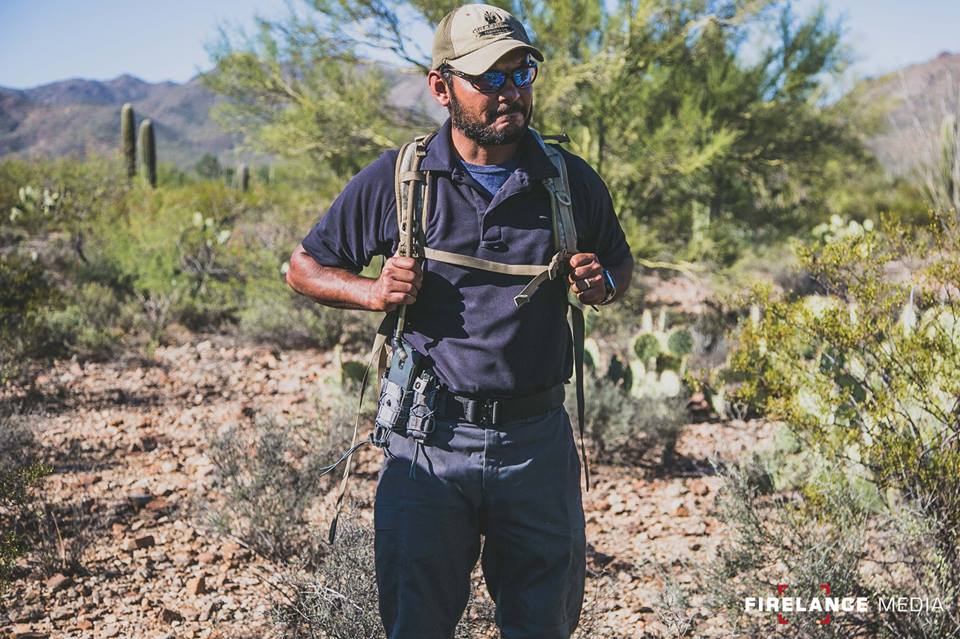 About the Author: Perhaps the Mad Duo’s most advertent minion (and certainly their duskiest), Breach Bang Freddy is a warrior philosopher who has been a tracker pretty much his whole life. Sometimes he smiles. Though he has studied and trained under many great teachers over the years, his overall mentor is none other than the storied Jim Grasky of the “Border Breed.” He is a former Marine Scout Sniper and Chief Scout who hails originally from Arizona. A combat veteran of OIF 1, he was an infantryman, then an infantry squad leader, a Scout Sniper, a Scout Sniper Team Leader and finally Staff NCOIC of the Marksmanship Training Unit at the 1st Marine Regiment (which is where he earned his second NAM for excellence in innovative training techniques). Freddy teaches via Greenside Training full time (when he’s not volunteering his time assisting local LEO and ESAR teams). He continues to instruct for the Counter-Explosives Hazard Center and other places. Sometimes he walks in single file to conceal his numbers. He is the author of Index Tracking: Essential Guide to Trailing Man and Beast. 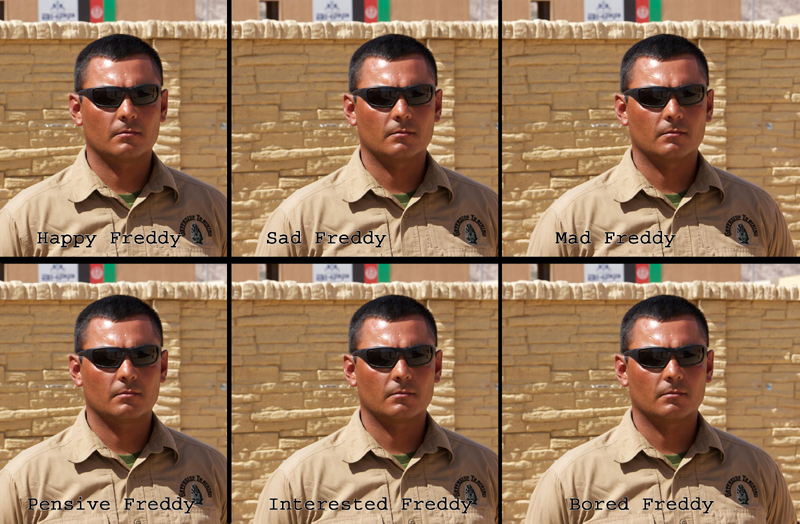 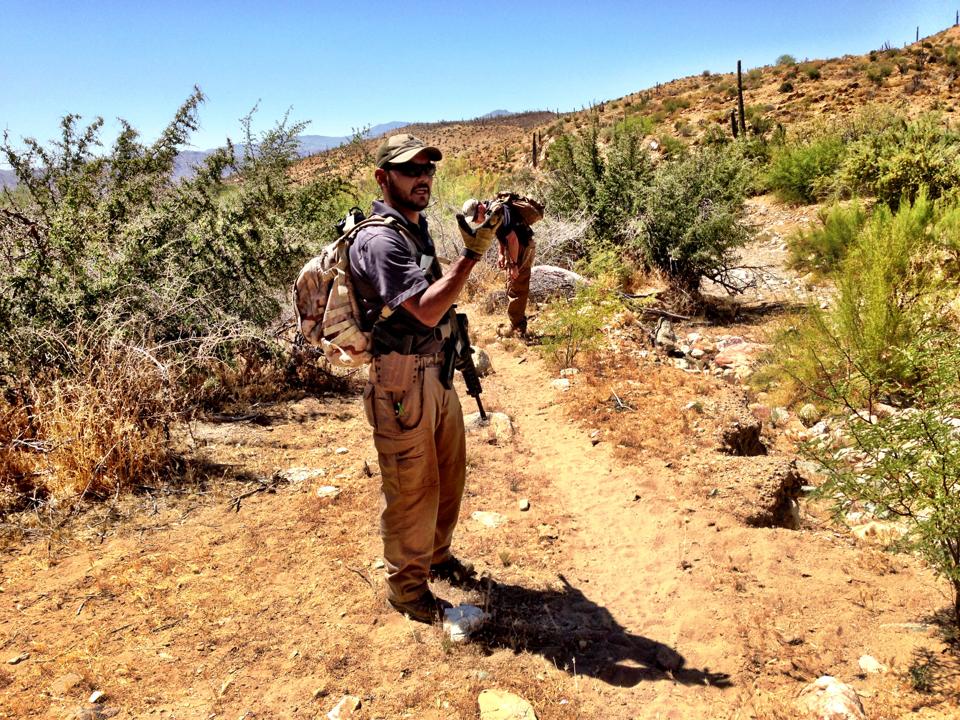