Retrofit your vest with the Grab Drag 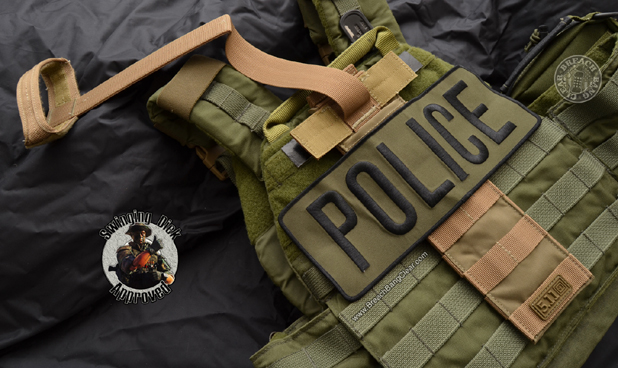 Man down drills are important. Nobody likes the necessity, but any training evolution should include at least one iteration. Good equipment can make it easier to move someone who is dead weight under threatening conditions – drag straps are a Good Thing, but are by no means perfect. They hamper movement so you wind up hauling ass like a clubfooted hunchback, can bind against the back of a helmet or against equipment and sometimes choke the casualty. The “Grab Drag 11” is a simple, inexpensive piece of kit that mitigates some of that. We had several of our minions look it over. Here’s their opinion.

A modular rescue handle that can be added to any MOLLE chest rig or plate carrier; whats cool about that?  What isn’t cool about that?  We’vve owned quite a few plate carriers and a few chest rigs in our day. One thing they all have in common is a lack of standardized features.  Rescue handles, usually placed high on the back of a plate carrier or chest rig, are there for two reasons: to drag your wounded buddy to cover, or to give your buddy whiplash when you are standing behind him waiting for something and would rather ruin his day than play Angry Birds on your phone.

“Every now and then, a simple piece of equipment comes along that impresses the hell out of me. This is a great goddam idea. Makes me wonder why it took so long for someone to put one out there. With one tug, you get an 18″ tow line with no Quasimodo Shuffle…beats the hell out of the alternative when it comes to dragging. There are couple extras you should have on your vest. One’s a tourniquet, the other is this.”  Breach-Bang-COWAN!

The 5.11 Tactical “Grab Drag 11” allows you to add a rescue handle to any PC or chest rig that the designer didn’t see fit to include and better than that, the Grab Drag gives you a foot and a half of slack when deployed to make the drag easier. (You can also surreptitiously deploy and hook it to any close by surface as a field expedient practical joke; just don’t put it on a vehicle and not tell the driver – seriously.)  Anyone who has ever had to drag a full grown man by a rescue handle knows that it’s no easy task. It’s made much more difficult by the fact that the majority of PCs don’t give you a whole lot of slack to work with, which usually results in you having to drag in a crouch or do an awkward Quasimodo shuffle.  Attaching to any MOLLE platform via 5.11’s Slick Stick System, the Grab Drag goes on easy and has additional MOLLE sewn to the outside so you don’t lose valuable MOLLE real estate for your admin/ammo/frag/smoke/Ipad/chainsaw/pogie bait pouches you may or may not want to mount high on your back.  It’s made of 5000 Nylon and comes in Black, OD and Sandstone, the most tactical of tactical colors.

“We used to duct-tape pieces of garden hose into the drag straps of our heavy vests so they were easier to get hold of. Even then you couldn’t take full steps and you wound up doing the Quasimodo Shuffle. This thing allows you to pull somebody from a near standing position, taking nearly full strides. It’s essentially a tow strap and it’s fucking brilliant.” Mad Duo David

Is the Grab Drag worth it?  Yes.  If your PC doesn’t have a rescue handle, this solves the problem in a cost effective (retails for under $50.00, which is a damn inexpensive life saver) method to give your co-workers the ability to haul your ass to safety and do so without having to shuffle about in an awkward body position while doing it thanks to the deployable slack.  Can it handle the weight of a full grown man and all of his full grown gear?  Yes. As an example we attached the Grab Drag to a PC lacking a rescue handle and filled that PC with a mostly (well, almost mostly) willing volunteer weighing in at 195 LBS.  Since he’s a pretty high speed guy, the rest of his gear weighted in at 30 LBS.  We didn’t have much of a problem dragging him across dirt, gravel, concrete or grass.  When not deployed, the Grab Drag is as low profile as a built in rescue handle, though once you get a hand on it and pull, it deploys to its total length and makes the task much easier.  We’re hoping they come out with a 5.11 Covert model for the club scene. Never know what you might encounter when dealing with single dancing moms.

We don’t care if you’re a 5.11 hater or not – you are definitely cleared hot to buy this thing. Seriously, this is the best thing to come along in tactical support gear since the nipple-less bra. So far it’s the only one of its kind we’re aware of. You can get one here.

Note – the T&E model we traded off was provided to us by 5.11 to torture. We did not pay for it. However, the two of the three evaluators who tested it and didn‘t get to hang onto it have since ordered one. True story. The third says he’s going to, but with the money he spends on hair products there’s no way of knowing if he actually will.