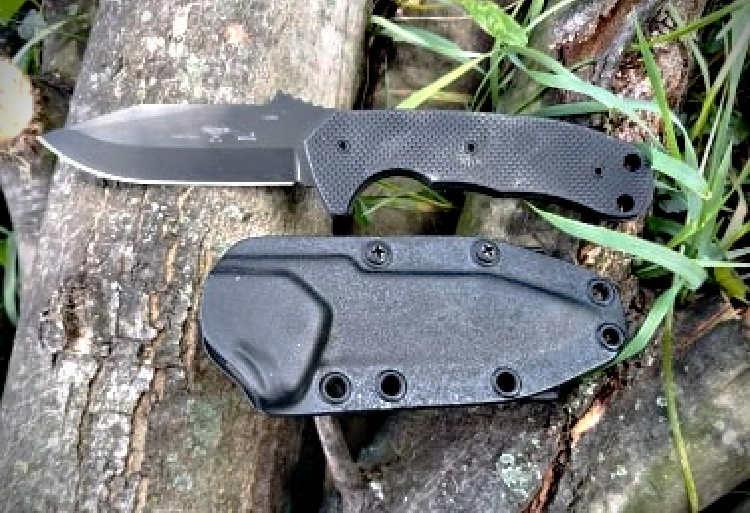 Emerson Knives is most known for its folding knives, but the company also has a line of fixed-blade knives that are worth taking a look at. One such knife is the Police Utility Knife or PUK. Although it is labeled as a “Police” knife, it certainly is intended for a wider audience, as we will see shortly.

The PUK’s blade is 3.6 inches long, which is not large for a fixed-blade knife. In fact, it’s on the smaller side, which makes it a handy little blade. The fact that it is under four inches long also makes it legal to carry in a wide number of localities. At .125 inches thick, the blade is fairly stout and can perform prying tasks if needed.

The overall length of the knife is 8.5 inches, so the total package is not large at all as far as fixed-blade knives are concerned. This lends well to concealing the knife if the user desires, and the fact that it only weighs 5.5 ounces just makes it better. 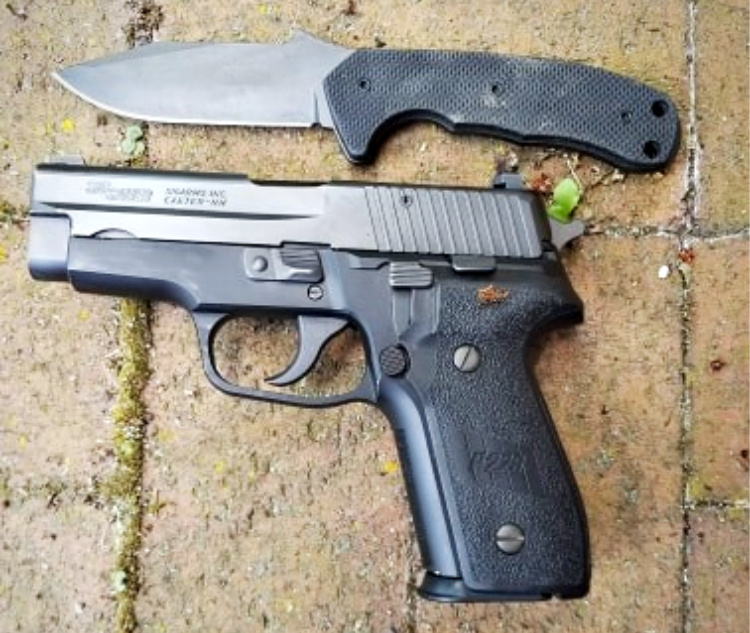 The PUK next to a Sig P228 to illustrate just how compact the PUK is.

The blade steel is one that Emerson is known for — 154 CM at a hardness of 57-59 RC hardness. This steel is easy to sharpen, and a few swipes on a diamond rod gets it back to shaving sharp in no time. The grind on this knife is a V-Grind, with a chisel edge, so when it’s time to sharpen, you only have one edge to sharpen, which makes the chore faster and easier.

The style of the blade is what I would refer to as a sort of clip point; it has a swedge as well, and lots of “belly” for slicing. The finish on my knife is black, but a stonewashed finish is also available. The cutting edge can be had either plain or partially serrated. The construction is full tang for added strength. 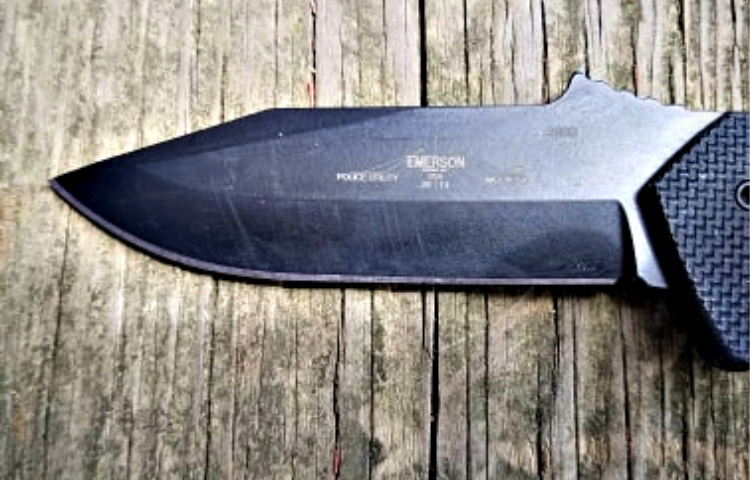 A close up of the PUK’s blade. Very utilitarian!

Normally the blade is the best and most vital part of the knife, but this Police Utility Knife handle deserves a special mention. It is constructed of G-10 (this particular material is very rough and grippy) and has two lanyard holes at the base of the handle. A small portion of the metal tang protrudes from the base of the handle, which would likely be able to serve as a glass breaker. The handle has a prominent guard, which will keep the hand from sliding onto the blade, as well as a thumb ramp that has very nice jimping. Combined, these two features lock the knife into the user’s hand quite securely. 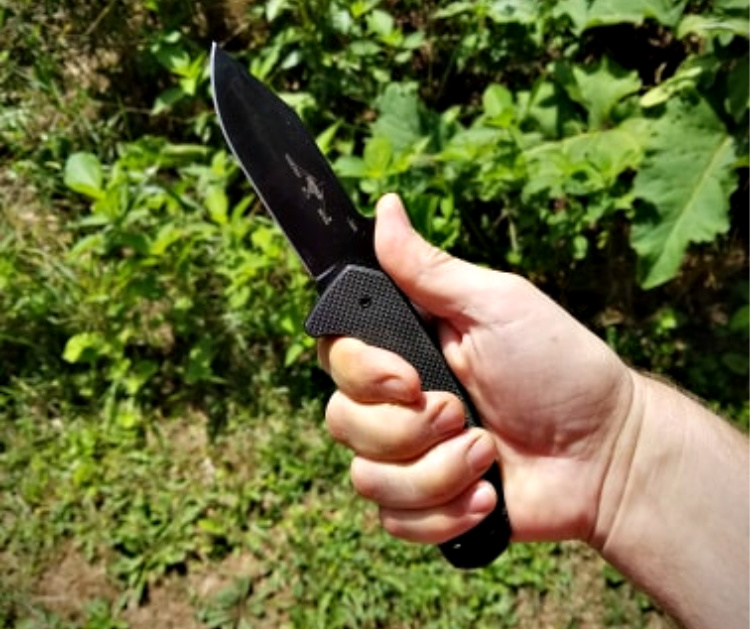 The handle fits the hand so well. The thumb ramp and guard are clearly seen.

This handle seems to be the exact same configuration that is used on the CQC-14 folding Emerson knife. For me, it is the most comfortable knife handle that I have ever held, bar none. It is just that good! Consequently, I was thrilled when I learned that Emerson elected to use this handle shape for this knife. The size is perfect, the finger grooves just feel as though they were made from a mold of my hand, and the ergonomics simply could not be better!

The sheath is thought out and practical, constructed of Kydex, with the blade clicking in securely. The knife will not accidentally come out of the sheath, even if it is mounted upside down on load-bearing equipment. There are mounting grommets all around the sheath, and a Tek-Lok mounting lock is included with the sheath and is adjustable for various belt widths. It can also be mounted to the sheath at various angles for added versatility.

Here we see the front of the sheath. It locks the Emerson PUK in very securely. 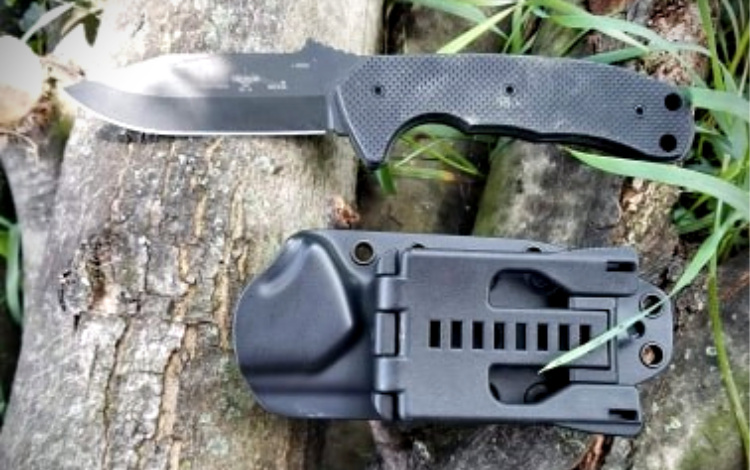 The back of the sheath showing the removable Tek-Lok.

The Emerson Police Utility Knife is versatile and could be used to fill a wide array of roles, not just for police. The blade is not huge, so users won’t be chopping trees down with it, obviously. But the utility uses are endless for this blade, to include sharpening tent stakes, opening packages, prying open car doors, and whatever else a user can dream up. The sky is the limit here. And it all comes in a small, light package that is very sharp and super ergonomic. From a patrol vehicle, tactical gear, outdoors/camping, bugout bag, or office setting, there is a job that this knife is perfect for. It’s up to you to find that job.

One thing is for certain: you will have lots of fun putting this knife to good use! 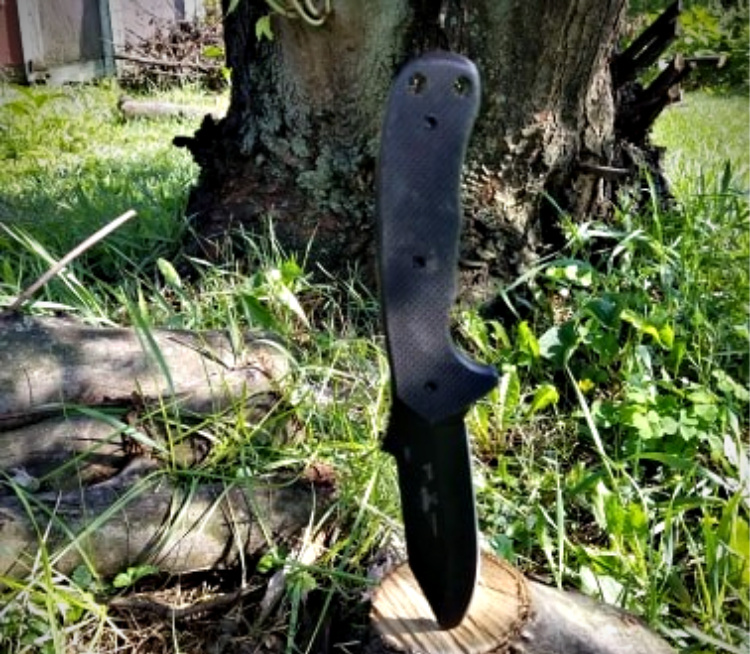