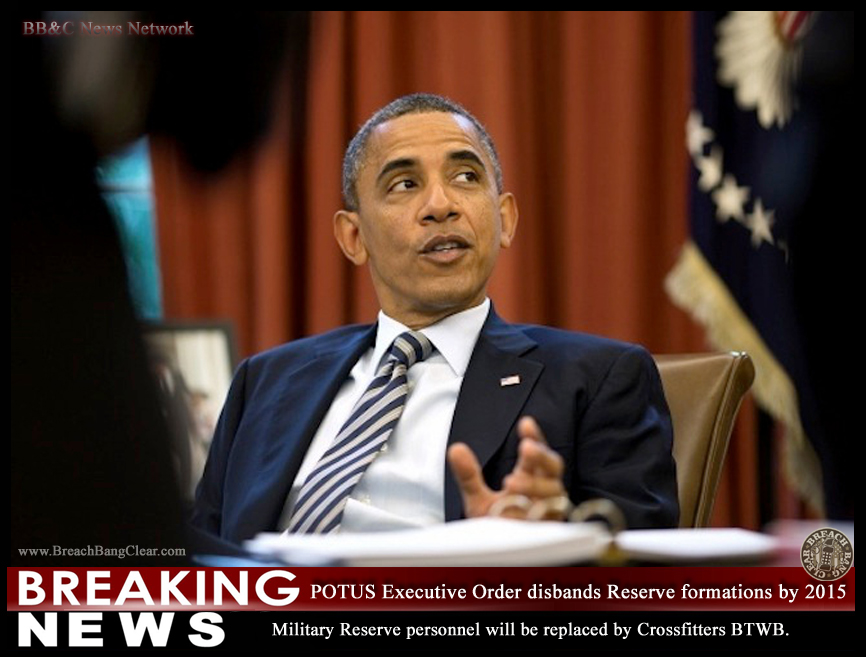 President Barack Obama (seen below with a number of legislators in his office) today signed an innovative (if unconventional and highly controversial) Defense Bill into law after a drawn-out bipartisan debate in Congress. Details of the legislation emerged just recently. House Majority Whip Eric Cantor, commenting on condition of anonymity, told reporters that, “Both sides of the aisle agreed that it’s probably for the best that we move into this direction. We need to trim the literal fat from the armed forces.”

Under conditions of the new law, all National Guard and Reserve units of all four branches of the military will be disbanded by Fall 2015.

Minority Leader Nancy Pelosi, speaking in her normally vacuous, bug-eyed way, said, “While normally I believe anything the public doesn’t already know is a secret worth keeping, I see no lasting harm in letting the plebes know what we’re going to be doing a mostly redundant and really expensive military.”

President Obama himself was away on another vacation and was unavailable for comment.

Apparently the new law (E.O. 0401) will not only draw down the active duty to levels unseen since the Banana Wars, it will eliminate all components of the United States Armed Forces Reserve as well as the National Guard elements (Army and Air) in their entirety in all 50 states. 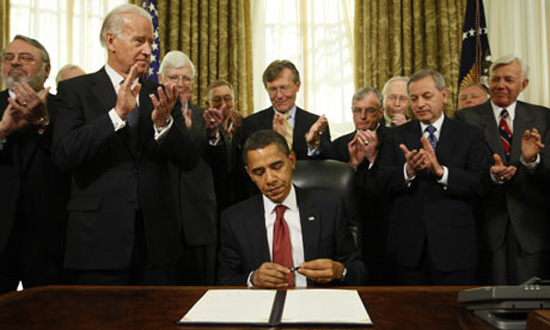 Seeking an overall reduction of our military and a reduction of our “ever increasing defense budget”, both the House of Representatives and the United States Senate have decided to go after the low hanging fruit first – but it’s their plan to replace the Guard and Reserve component that has created the most furor. They plan on conscripting Crossfitters into the CrossFit Auxiliary Force.

It’s not as crazy as you might think – and several high ranking military officials support it. 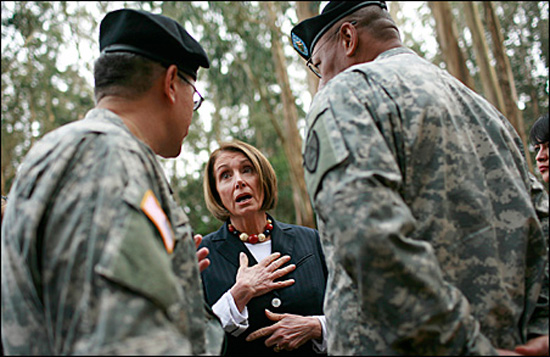 Congresswoman Nancy Pelosi, speaking to some retard who can’t shape his beret.

In May of 2010 the US Army actually published a 69-page study evaluating the CrossFit program and its effects on combat fitness. What they found in that study (link below) is that CrossFit does have a direct bearing on a Soldier/Sailor/Marine/Airman’s ability to maintain mental acuity under stress, maneuver under exigent conditions while carrying heavy loads and remaining combat effective during lengthy, exhaustive combat operations. Though much of the evidence was anecdotal, the only real difference between the Army Crossfitters in the study and their civilian counterparts was that the military personnel weren’t constantly posting shit about it on their social media pages.

The Executive Order was initially drafted after a 2012 tour of several reserve bases nationwide, wherein Congresswoman Nancy Pelosi found herself disgusted and appalled at the physical condition of many our nation’s reserve Soldiers, Marines, Airmen and Sailors.

“These walking food-blisters do nothing between drills to maintain military appearance and readiness,” she is quoted as saying. “Some of them don’t even have arms or legs! They suckle at the tit of our tax payers, claiming funds and benefits that could be spent on people who really need it, who genuinely deserve it. How many of our more deserving poverty level social programs could be funded with just the money from one infantry squadron?”

After speaking at length with one National Guardsman in Alabama (who was dressed in only a poncho and combat boots), she “…knew there had to be a better, more affordable way to maintain a force in readiness.” Specialist Luke McGriffin, the poncho clad soldier Congresswoman Pelosi met, still remembers that day.

“I never thought she would make such a big deal out of this,” he said as he gnawed on a honey-coated turkey leg. McGriffin says he weighs “around 315 lbs” and stands 5’9 tall and has outgrown all his uniforms. “I mean, sure I’m on profile, but I can’t help it that I got hurt. Besides that I’m still ready to fight! The service has an unrealistic view of height-weight requirements. They really need to update the PT criteria for today’s average American.” 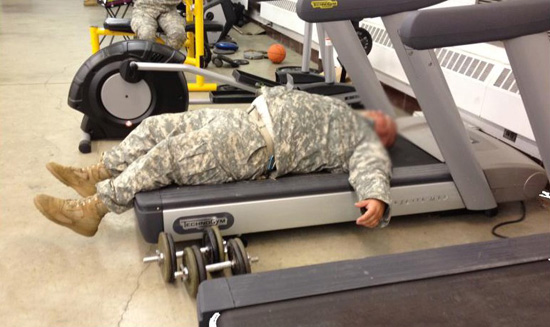 One of the first Reservists to be replaced by the CAF.

Over a year of research conducted by special committee went into EO 0401 before its signing. One key question was asked: Why are there so many civilians, in prime physical condition, but our military is swelling at the belt?  Studies found that the so-called “CrossFit” fitness training craze has swept over our nation the last few years is the primary factor responsible for the increasing number of “chiseled gym gods” so frequently seen posting on Facebook. Many of them are in 20-30yr old range, which is prime military age. The study indicated that CrossFit is extremely popluar in many demographics, providing a “broad, general and inclusive fitness”  that prepares trainees for “Any Physical Contingency.”

That physicality will now include National Defense responsibilities, possibly even warzone deployments.

“It just makes sense,” says Secretary of Defense Chuck Hagel, taking a break from a really fucking productive meeting with SNL’s Drunk Uncle. “First off, we have to argue with military personnel to stay in shape – Crossfitters pay money to do it!  There are many similarities to the military already. They’re a cult, like the Marine Corps, they have their own language and acronyms, like the Army, they have their own weird ritutals like the Navy and they frequently pose for selfies looking way harder than they really are like the Air Force. Do we still have a Coast Guard?” 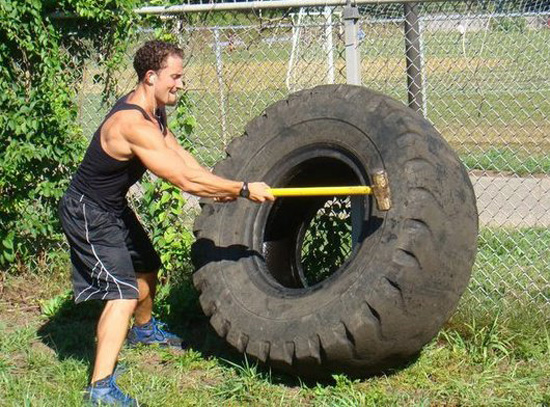 “Think of how it would affect public opinion once casualty reports start coming in,” added an enlisted aide to Sgt. Maj. of the Army Raymond F. Chandler III. “Nobody will care if Crossfitters are on there, everybody hates them anyway. It will be like having our own version of the French Foreign Legion

on standby for contingencies.”

It is widely accepted throughout the active duty Army that the so-called ‘SGM Mafia’ never liked the idea of an Army Reserve or Army National Guard to begin with and had, in fact, tried to ban them already under the aegis of tne AR 670-1 which went into effect yesterday.

The Special Committee found that CrossFit Gyms are a profit generating enterprise, unlike the so called “cash burning” Armed Forces. Since so many athletes train in CrossFit, and are at peak levels of peak fitness, it was dermined that a transition from Crossfitter to ‘Auxiliary Warfighter’ would be relatively simple. All that would be required would be some marksmanship and small unit training integrated into a typical workout routine. So, under the new law, all those who wish to train in Crossfit will be required to incorporate rudimentary small arms and maneuver exercises into their workout routine.

“I mean, look at these assholes,” said Brig. Gen. Jeffrey Sinclair. “They’re already out there hitting tires with sledgehammers, swinging ropes and doing reps of Burpees. Why not have them learn to shoot and move in patrol formations? Plus, the girls are hot. Go Google Crossfit Ass why don’t you?”

Marine Corps Commandant Gen. James Amos expressed his support for the measure, though he reportedly has “some concerns” about whether the Crossfitters would be allowed to roll their sleeves in the gym. Amos, widely regarded as the best Marine Commandant since Anthony Gale, is known for his exacting standards and support for the Marines on the sharp end. Having him on board with the Executive Order is seen as a bellwether for widespread support at the Pentagon. 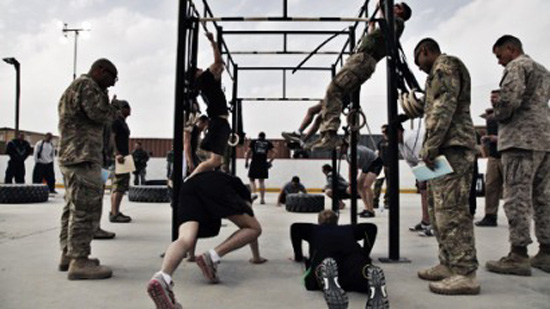 Noting that hazing has been an ongoing issue in the military, EO 0401 removes the issue from the new “CrossFit Auxiliary Force.” Since CAF members are all volunteers, they must sign on to willingly haze themselves.

The new CAF conscripts will be trained by a “super team” of existing CrossFit instructors and active duty military servicemen.  The law will be retroactive, mandating all those already doing CrossFit, to continue their workout schedule for a minimum of another four years. All new members of CRF will be conscripted for an “undetermined period of time, based on the needs of national security.” 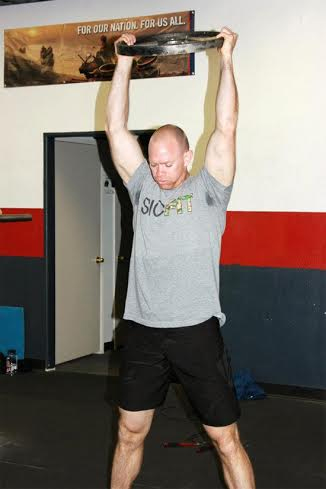 One of the first CAF members near Camp Pendleton. “Dude, I’m totally stoked,” he reportedly said when conscripted. “Airborne!”

Those who willingly enlist at their closest gym duty station within the next week will receive a free sweat towel and “CAF-the best of the best!” branded sports water bottle.

Lance Beck, a CrossFit enthusiast and owner of XTREME CROSSFIT in Virgina Beach, Va had this to say about the new law’s passing.

“Its great bro! Yeah, I mean we are all jacked like SEAL team 6 here anyway, so why not? I’ve been telling people for years I’m a SEAL, so the new CrossFit Auxiliary Force is gonna make that legit!”

When asked if he had any concerns about learning to shoot, Mr. Beck responded “Nah, I mean, I’ve never shot a gun before, but I play a lot of Call of Duty so I’m sure I’ll be a sniper bro!”

He went on to add that the new mandatory CAF conscription would be great for his business, and that too many “fat turds” are walking around these days.

“Its good the federal government is gonna require dudes to get their ass to the gym!” Lance said. “As for going overseas during a war, it would be cool. I heard the infantry is like camping with cool guns. I can’t wait.”

President Obama is reportedly pleased with the idea of reducing US Armed Forces spending and eliminating what he described as the  “The…um, ah, literally oversized, worthless reserve components of our military who are an unnecessary burden on the taxpayer.”  He went on to say, while signing off on H.R. 0401 that “Let me be clear – in a time when all public servants recognize the need to eliminate wasteful and, uh, duplicative spending, the elimination of the antiquated national guard is a no-brainer. Make no mistake. Change isn’t easy. It won’t happen overnight. There will be setbacks and false starts, but…ah, our citizen reserve will serve for free, while creating much needed jobs in form of CrossFit training compounds.” 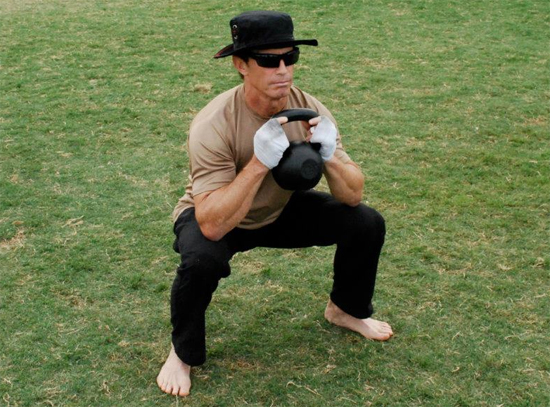 Kettle bells will become a mandatory part of the CAF Sergeant Major Academy.Stern grimace and black boonie hat will be issued during training.

You can find the Army Crossfit Study online here.