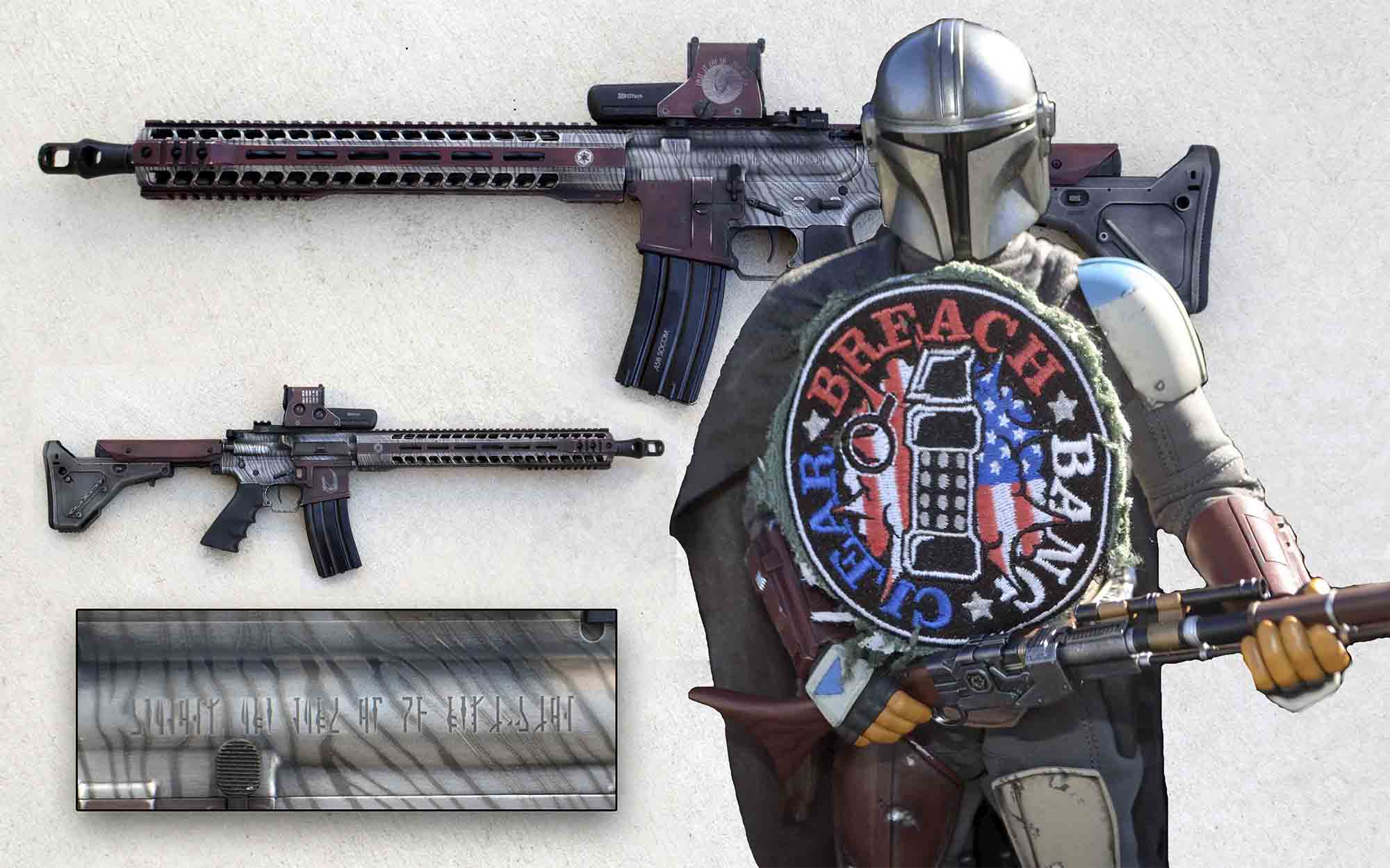 One of the more interesting rounds of the past two decades for the AR platform is the 458 SOCOM. In spite of its name, the 458 SOCOM is not in use by SOCOM troops. Nor, that we can confirm, by Mando himself. We like it though, beskar bullets or no, and reckon it’s a proper choice for a home-built Mandalorian gun. That’s really all that matters.

While the concept of the round was developed with input from USSOCOM (specifically Task Force Ranger), 458 SOCOM is not currently used in any official capacity by the US Military. A good friend who runs a silencer company told me nearly 10 years ago that he would start making silencers for the round just as soon as USSOCOM places an order for them.

Ten years later and he still has not made one. Dammit.

The round is a hit with hog hunters, but when you’re taking on a pack of hogzillas, you don’t want a single shot or even a bolt or lever gun. Semi-auto with detachable magazines are the only way to go.

458 SOCOM was designed with AR platforms in mind; primarily the original 5.56 versions. Standard magazines can be used for the bigger caliber, but do have to be modified slightly, and the sheer size of the round significantly reduces magazine capacity. A lot. It turns your 20-rounders into 7-rounders and your 30-round magazines into something that’ll hold just 10 or 12. The exact number varies with the magazine, though some companies do make a dedicated 458 SOCOM mag.

The upper for the Beskar Blaster (which sadly isn’t actual beskar steel) was built by Radical Firearms. We mounted it in a Billet lower made by Reno Firearms Academy, now Reno Guns and Range. This was one of their Battle Born lowers. 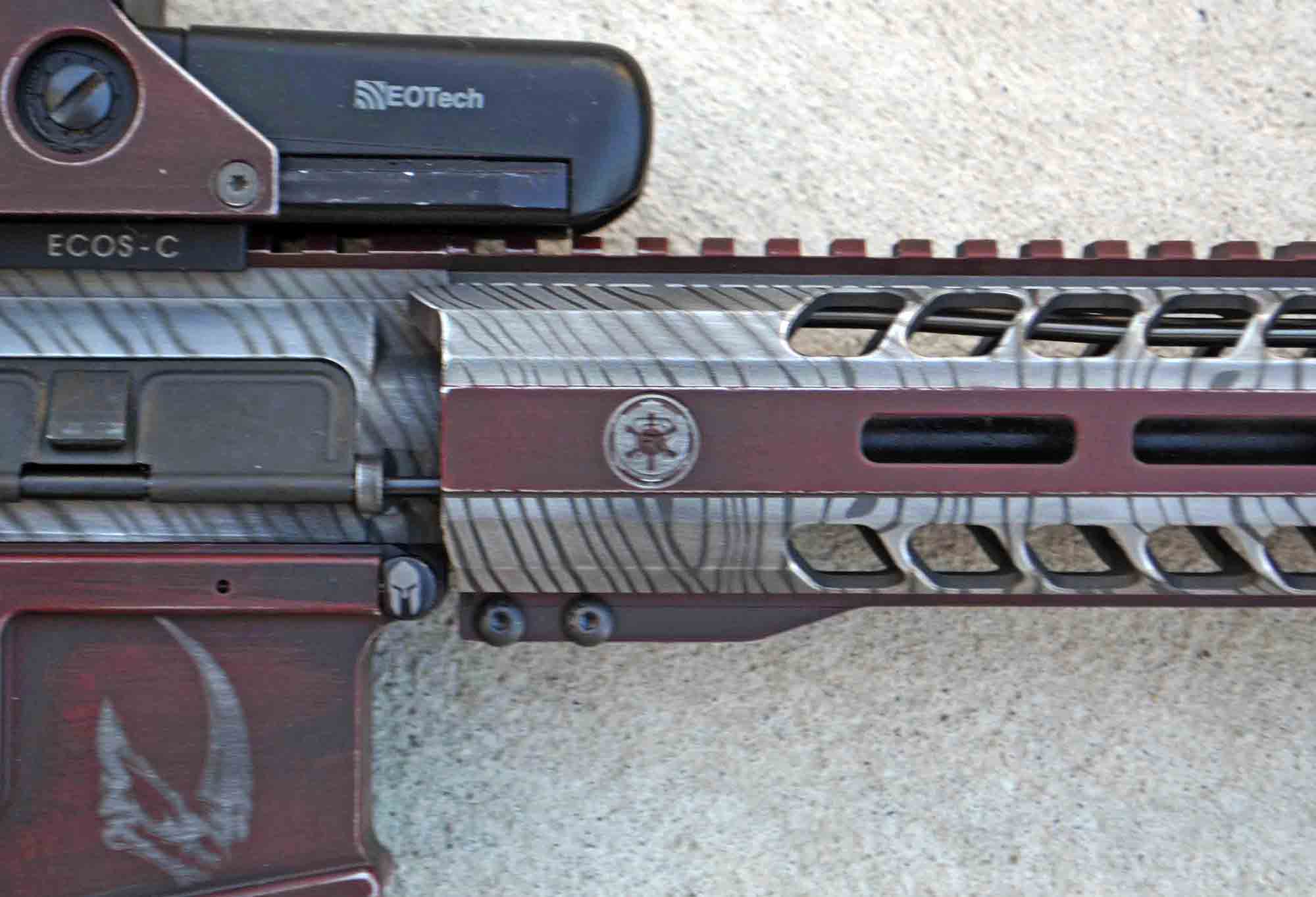 A Rise Armament trigger was used for the bang-switch, a Hogue pistol grip was added, and finally, a MAGPUL UBR attached to round it out. 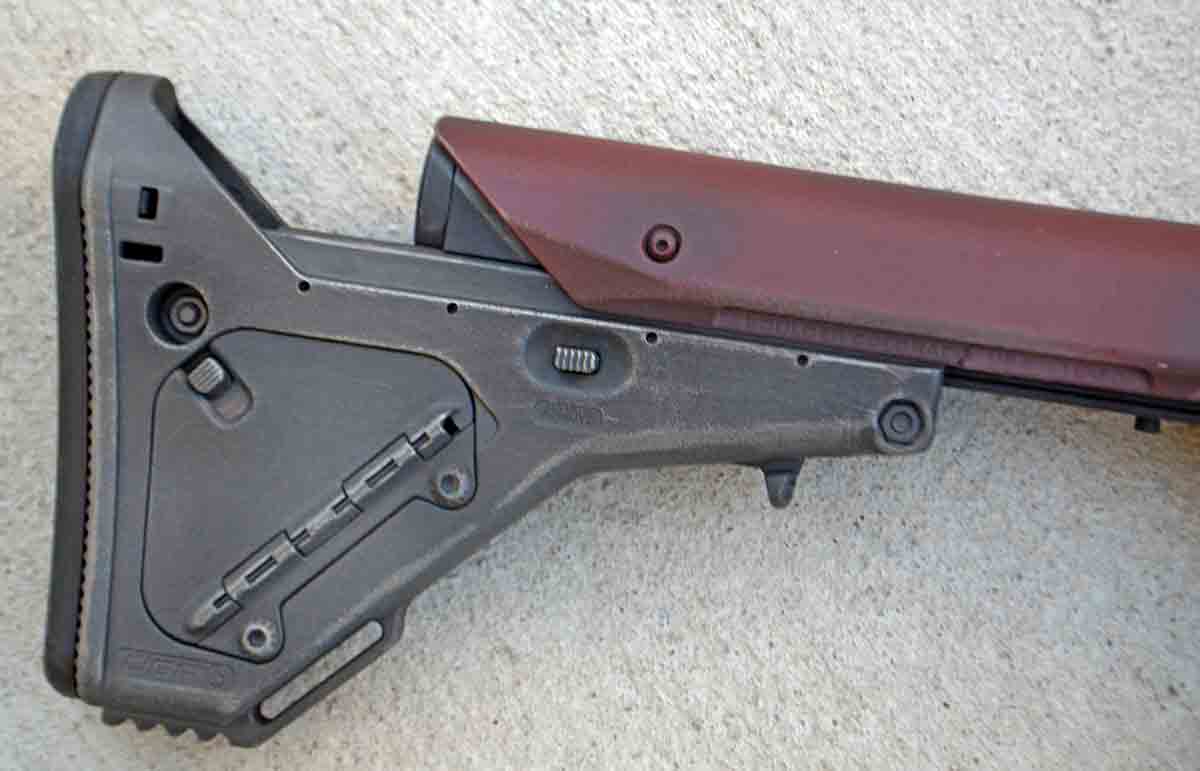 The Magpul UBR does more than work very well – it fits the aesthetic of this build.

For an optic, we used our old EOTech. This made the Beskar Blaster a fine shooter, but we wanted to make it stand out from our other black rifles so we paid a visit to Nevada Cerakote for something more than a camo paint job. 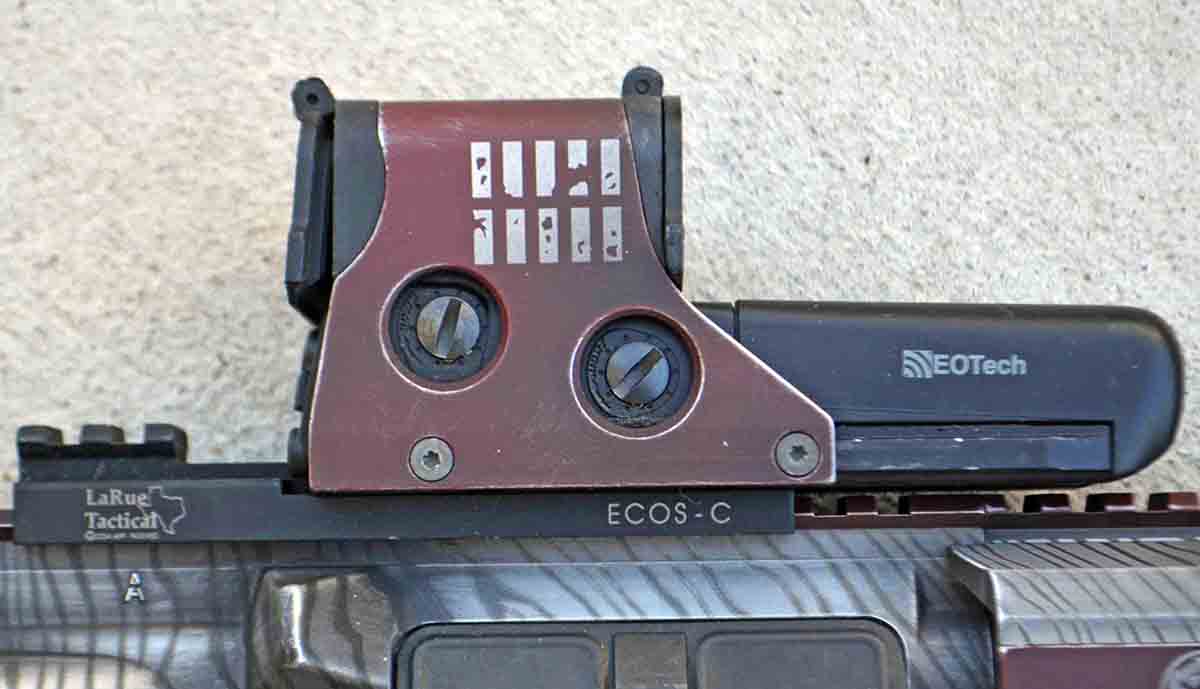 EOTech 512 optic on a LaRue tactical QD mount. This optic is at least as old as anyone currently standing on the yellow footprints at Parris Island right now! This has been mounted to a M1A, several AR15, some AR10s, and some other blasters. There are some who still piss and moan about EOTech. We’re not among that number: would we want to go straight from Hoth to Tatooine with it? Nah. But in the deserts of Nevada, it’s awesome.

Mando maneuvering: This is the Way

Putting together the Mandalorian Gun

To say the Disney Plus series The Mandalorian made an impact on me is a bit of an understatement. As a kid who saw the original Star Wars in the theaters before it was called A New Hope, I became disinterested in it over the years. I wasn’t obsessed with hokey wizards and their lightsabers and the SJW plots of the Sequel trilogy are vomitus. 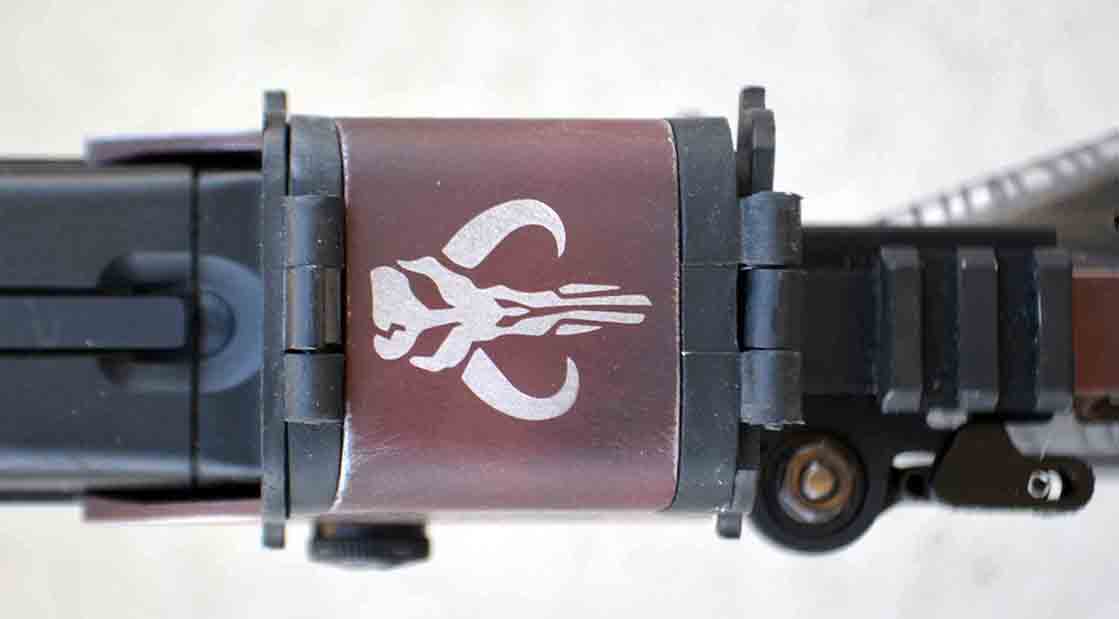 Top view of the Mandalorian symbol on an EOTech – can’t have a beskar blaster without a mythosaur. Though this particular EOTech 512 will probably remain here, with that LaRue Tactical QD mount we could switch it to a new blaster in moments.

Rogue One awakened a longing for the Original Trilogy, but The Mandalorian brought back everything I liked about the franchise. For an hour a week, I can feel like a kid again and watch the space western that was probably my gateway into guns when I was 7 or 8.

So, I had Russ work his magic on my blaster. The only instructions I gave were “Think Mandalorian”. This build has it all.

From the pictures, you can see the attention to detail. It evokes the themes of Beskar, the Clan of Two, Mandalore, and other fun things from the show.

This is the way.

“Weapons are a part of my religion”, is on the port side of the receiver (in the appropriate language) and even the EOTech has a bit of Mando flair on each side. 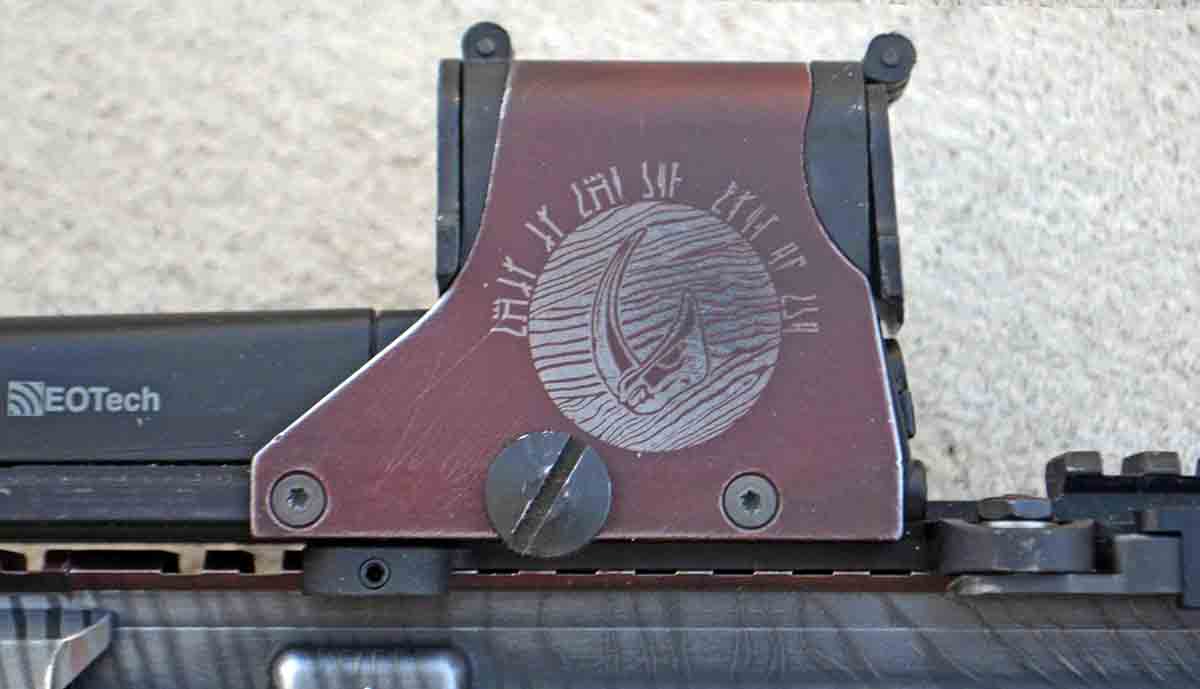 “I’m a Mandalorian, weapons…” (You know the rest.) That pop-up cover is one of GG&G AZ‘s scope lens covers. It says FRONT TOWARDS ENEMY on it, but there are some other options available. (Also on Optics Planet.)

Of course, 458 SOCOM has a bit of recoil. I wouldn’t call it excessive, certainly not more than an Amban phase-pulse blaster, but previous outings with this round and a lower with a collapsible CAR type stock were not forgiving. The UBR stock, although a little bit dated, not only reduces recoil through better ergonomics and construction but has so many little details that it makes the rifle look like a proper Mandalorian gun. 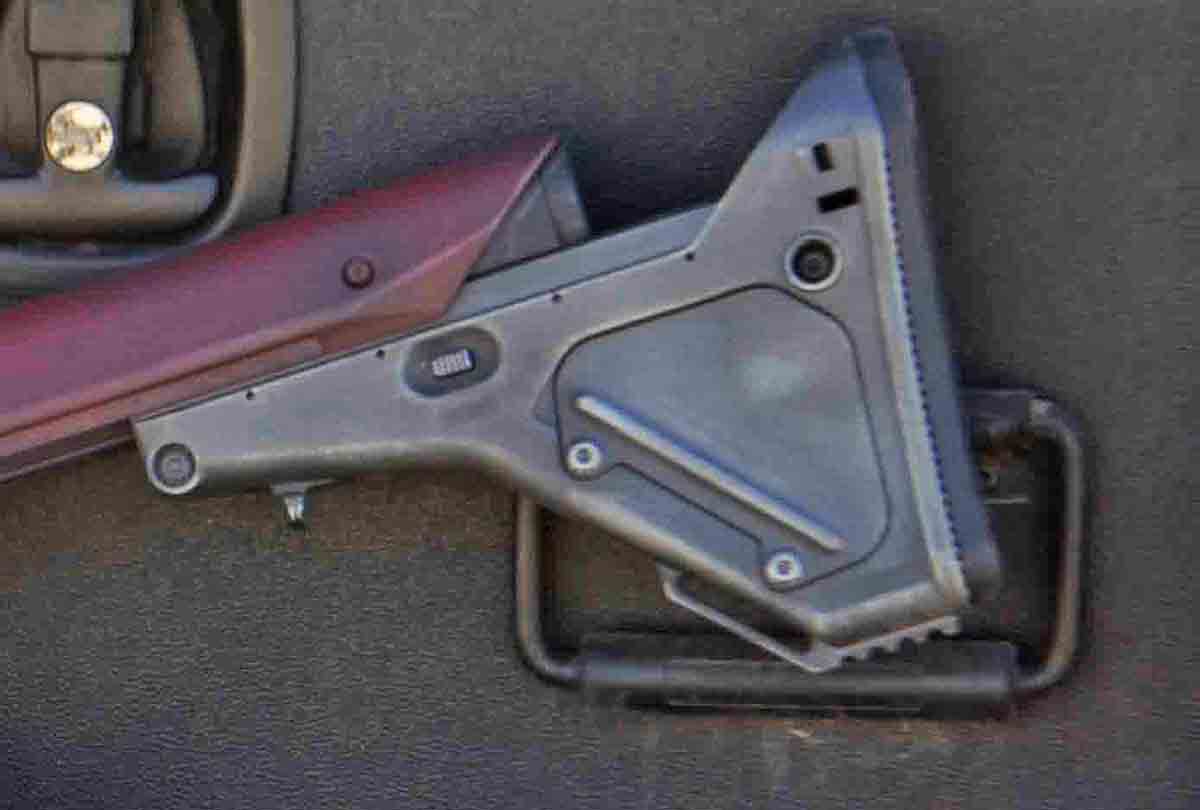 The Magpul UBR stock has been around a while, and some folks think it’s too heavy, but on a gun throwin’ .458 SOCOM downrange we like it that way. Plus, it just looks fucking cool.

At 50 yards we were putting sub-2-inch groups on paper and ringing steel. A magnifier behind the EOTech might be in the future, but for a close-range rifle for use against boars, bears, and bowling balls; this one is tough to beat.

The only downside to it all is having to modify the magazines. It is ideal to buy them off the shelf and it was a good thing that Radical sent a few along because modifying the feed lips is a lot of trial and error. 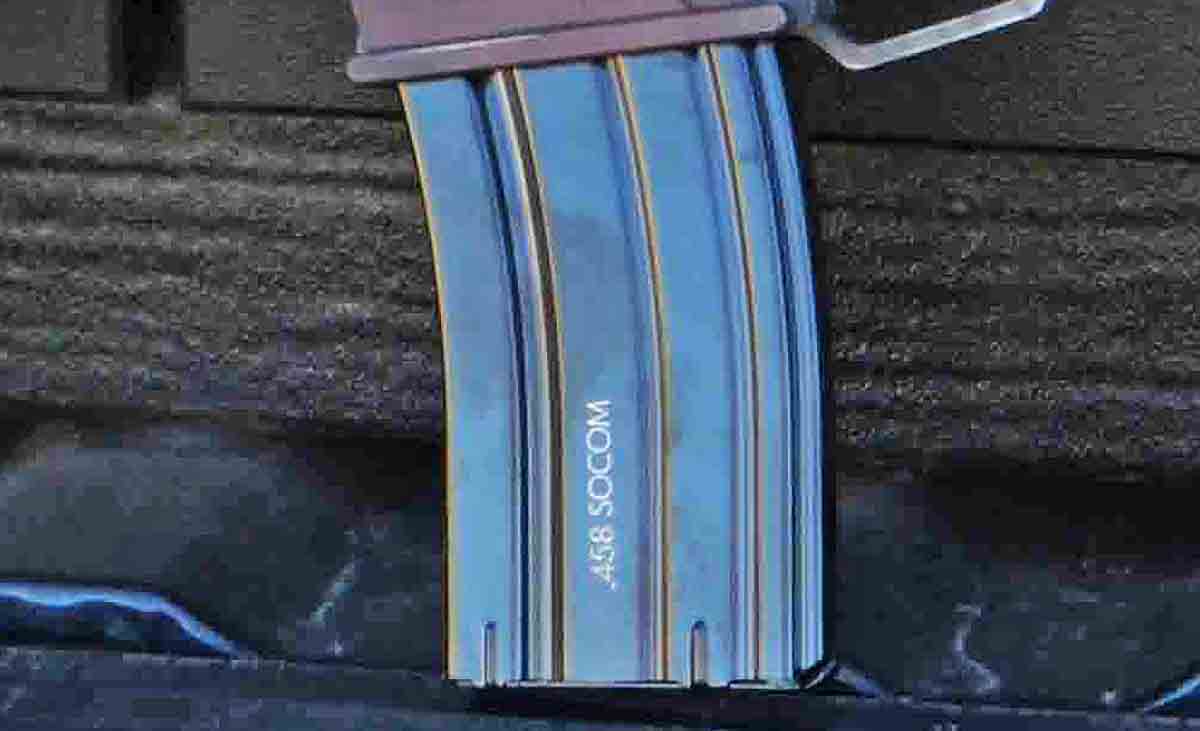 If the US Military never adopts this round, it might show up with a group of bounty hunters looking for their lost brother at the Great Pit of Krakoon on the planet Tatooine in the future. 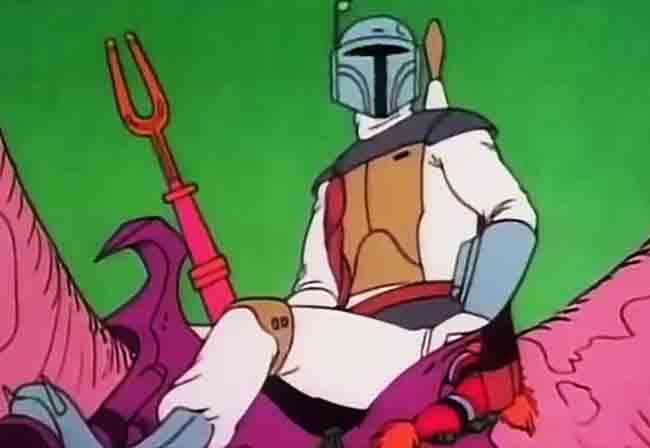 Scroll down for additional build images. 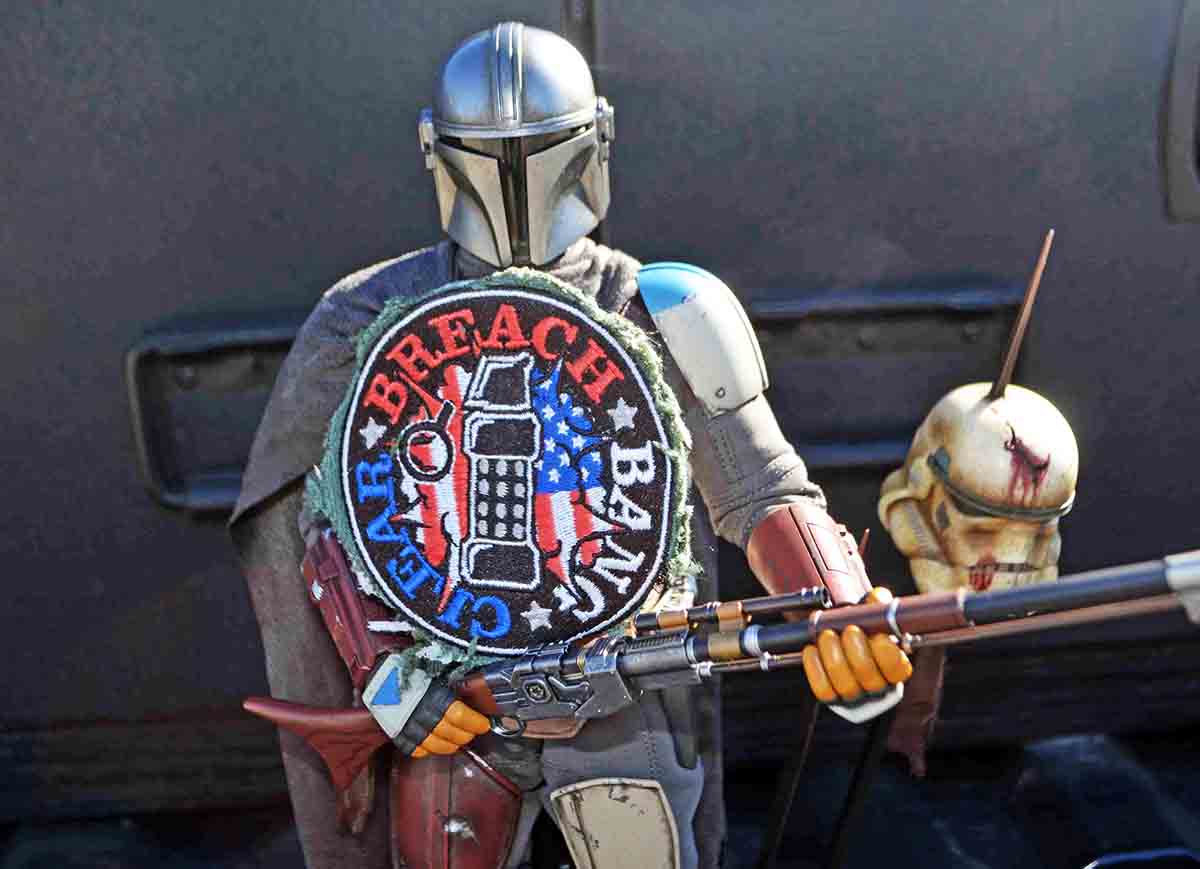 Like your mom, the .458 SOCOM is all about the girth. It’s a short, thicc, weird-looking case that comes in some pretty heavy metal (not surprising of course – after all, it’s a big bore caliber). Think bullets up to 600gr, often traveling subsonically, for suppressed use. Drop that to the 300-grain range traveling much faster and you have something big enough to drop a rabid Blurrg — though a single hit might not be sufficient to stop a rampaging Mudhorn. The round has been likened to the 19th century’s .45-70.

“This cartridge, however, the .458 SOCOM (.458 Special Operations Command) was reportedly given birth over a barbeque and some cold brew. It was at an informal gathering of special ops personnel, specifically Task Force Ranger, when the subject of stopping power came up. It seems it took multiple hits to permanently take the opposition “out of the game” in Mogadishu, Somalia. The consensus was a one-shot stop would sure be nice. Marty ter Weeme, founder of a company called Teppo Jutsu, L.L.C., went to work. In 2000 a sledgehammer cartridge that would launch 250- to 600-grain .45 caliber bullets from a standard size AR-15 with a proper barrel and chamber was born — enter the .458 SOCOM.” 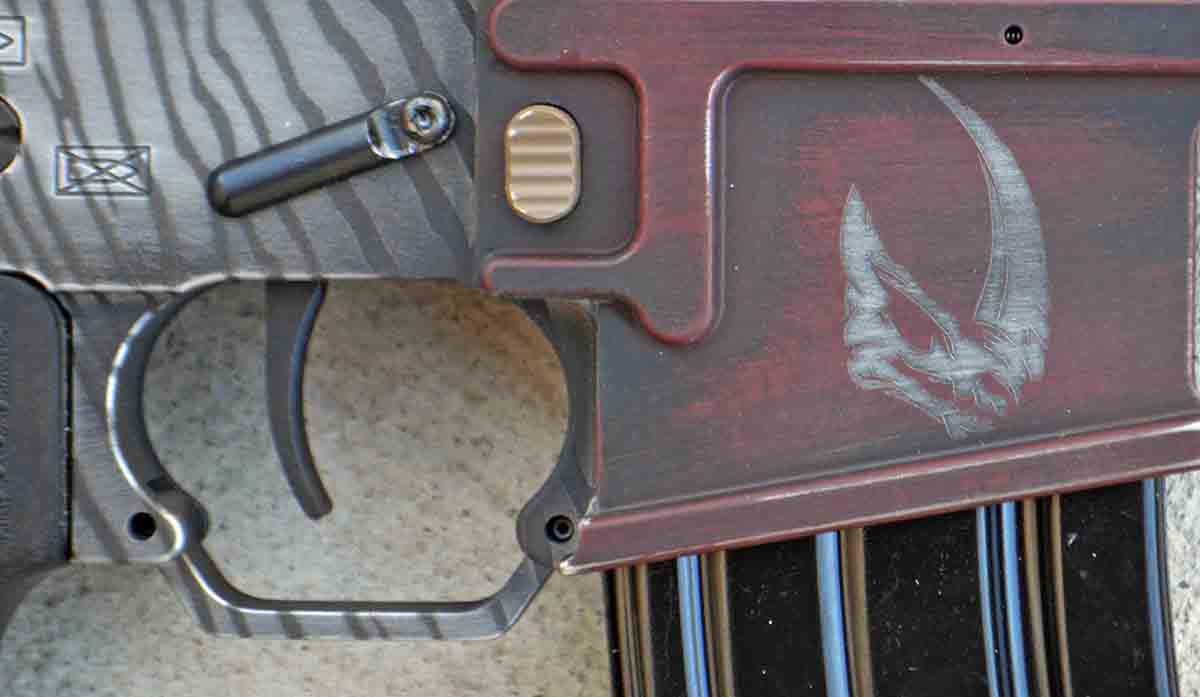 A Mudhorn signet on a Mandalorian gun magwell: but behind that, a Rise Armament Trigger. That’s an older version of what they now call their “Enhanced Rifle Trigger”. 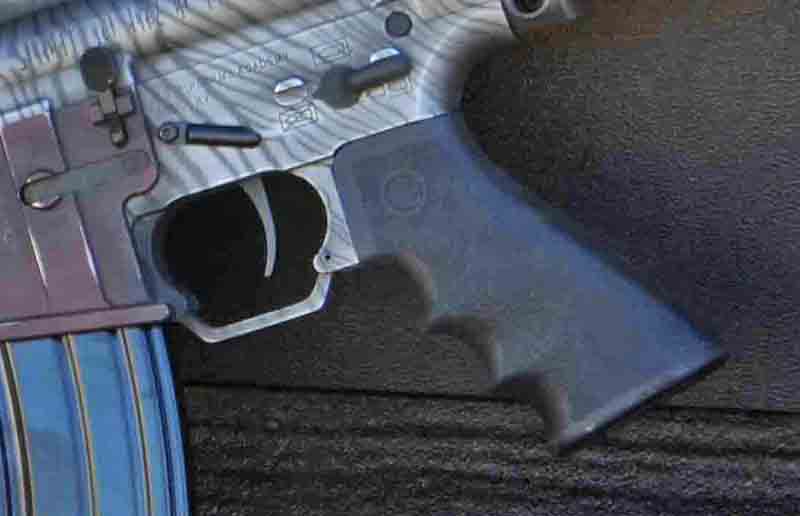 A Hogue AR15 grip to get hold of things (and to provide a platform for that Rise Armament trigger).

You can read more about the cartridge on Shooting Illustrated.