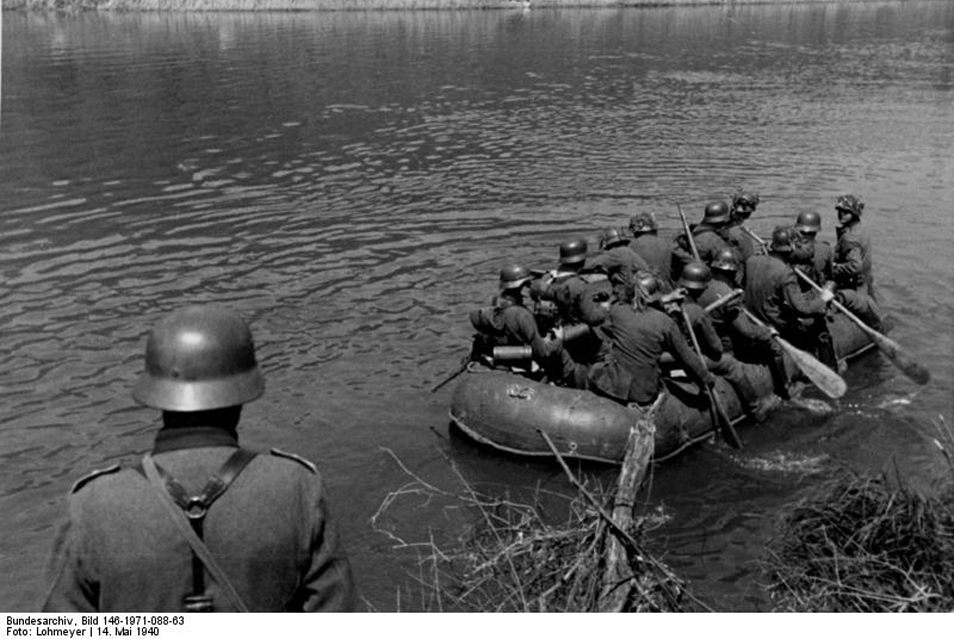 Today’s guest post is the another piece from Bucky Lawson. In case you missed it, you can check out his first post here. Mad Duo

Anyone familiar with the US military command system understands the concept of “mission orders.” Basically, orders are issued identifying mission objectives, with details of how to attain those objectives left to lower-level commanders. The further down the chain the objective goes, the more detailed the orders. This system avoids the imposition of overly-rigid orders by commanders far from the scene, empowering those who actually have to put them into action. It also encourages those at the sharp end to take initiative without awaiting approval from higher up, by which time critical opportunities may have passed. 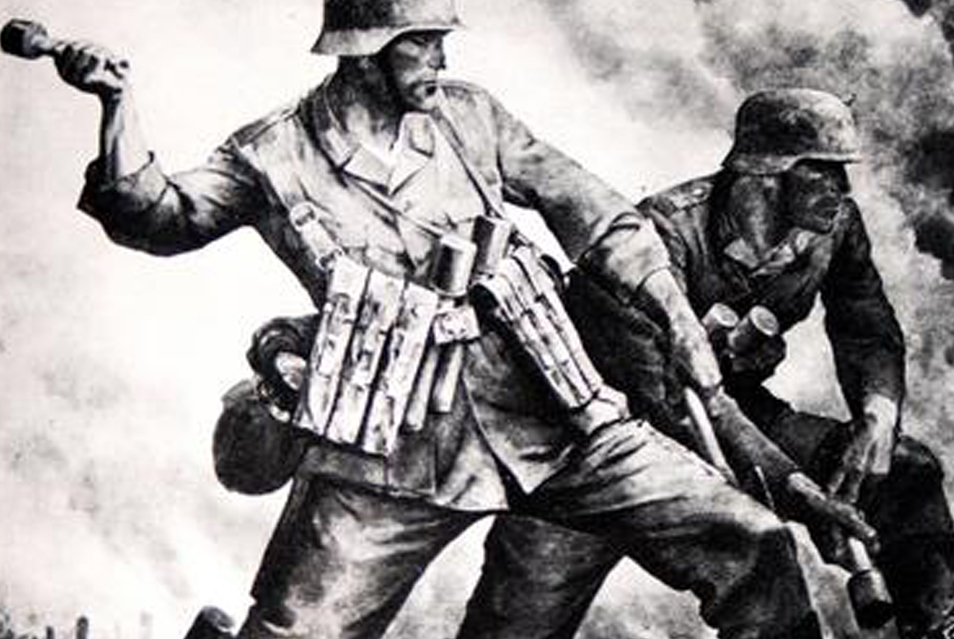 This tried and true technique has been around a long time, but Germans gave it a name: auftragstaktik. The legendary (in Germany anyway) Field Marshal Helmuth von Moltke the Elder wrote extensively about it in the 19th Century. The famous Field Marshal Alfred von Schlieffen has been criticized, unfairly in my opinion, for casting it aside when he drew up what would become the basic plan with which Germany began World War I. Fair or not, by 1918 the Germans had returned to auftragstaktik on the Western Front. It could be argued they took it too far, but that’s another article entirely. 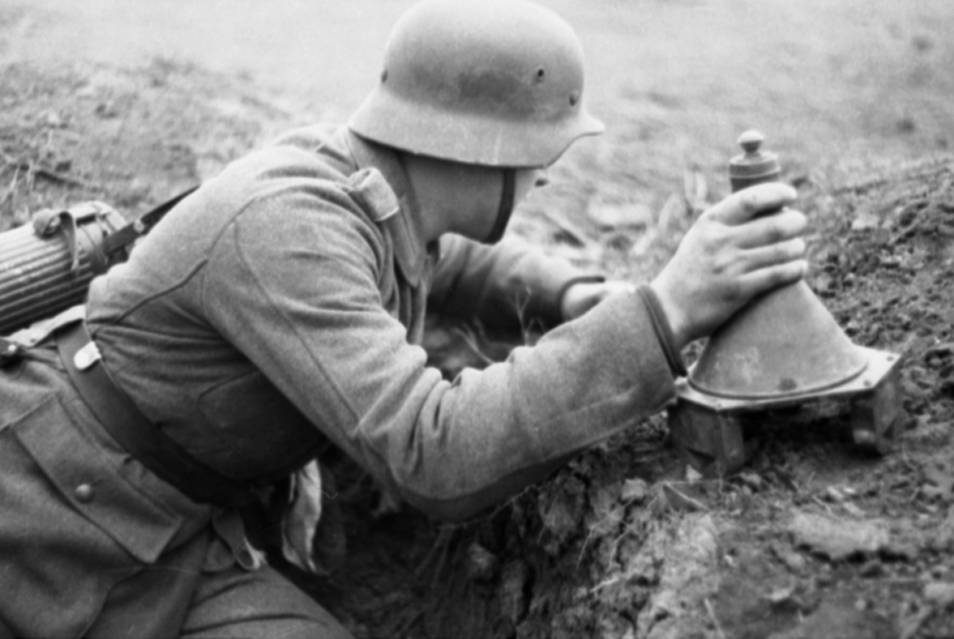 Anyway, by the outbreak of World War II, the German Army had refined and ingrained the technique in officers and NCOs. Auftragstaktik is a central theme in any account of the early German offensives, but we’ll just look at one.

The German breakthrough at the French city of Sedan on 13-14 May, 1940 was the key engagement in the campaign that defeated France. When the fall of France comes up, most people think of fast-moving German panzers and French soldiers throwing their weapons down and their hands up. There’s something to those images, though the French soldiers have gotten a bad rap. But what very few realize is that German armor may well have been stuck on the wrong side of the Meuse River without the efforts of a small assault engineer force led by an obviously highly-motivated individual named Günther Korthals.

Korthals was a platoon leader in the 3rd Company of the 43rd Assault Engineer Battalion, which had been assigned to the 1st Rifle Regiment of the 1st Panzer Division. The battalion’s orders were to support the regiment as it forced the Meuse at Sedan. Specifically, German assault engineers specialized in bunker busting and were equipped with flamethrowers and shaped charges to make sure the job got done right.

True to the principles of auftragstaktik, the 1st Rifle Regiment’s order for the river crossing read simply, “Act in accordance with War Game ‘Koblenz.’ Execute at 1600 hours today.” As might be expected, the crossing had been rehearsed for months ahead of time and the order reflected that. Except Korthals had a problem: his battalion was still stuck in the monster traffic jam created by an entire army group trying to move along the narrow roads of the supposedly impenetrable Ardennes Forest. 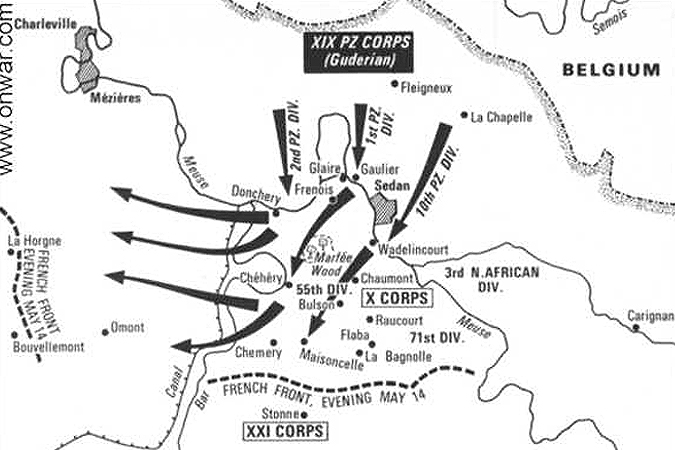 Korthals’ company commander, recognizing the problem, instructed his platoon leaders to get free of the forest and get their butts to the crossing as best they could. Korthals and his 3rd Platoon were the first to arrive and were ferried across in assault boats. More problems were waiting on the other side. Korthals couldn’t find his CO, and couldn’t raise the battalion commander or 1st Rifle Regiment HQ. Finding himself without specific orders and not willing to sit on his ass waiting for some, Korthals grabbed the 1st Platoon, which had just crossed, and decided to blow some shit up.

The engineers had crossed near Gaulier in the wake of the lead elements of the 1st Rifle Regiment, which was pushing hard to the west. As he moved up, Korthals saw that the regiment had been stopped at the Bellevue Crossroads near Frenois on the Sedan-Donchery Road. The crossroads was under heavy fire from a massive artillery casemate to the southwest and bunkers north of the road, which were built into a hill on top of which stood the Chateau of Bellevue. In that chateau Napoleon III had surrendered to the Germans after the first Battle of Sedan in 1870.

Seeing what needed to be done, Korthals’ two platoons, carrying their high-explosive goodies, looped to the north and came down west of the chateau, between the hill and the river. Approaching the bunkers from behind, Korthals got another piece of bad news: the flamethrowers hadn’t made it across the river yet. Not to be discouraged, the engineers broke out smoke candles, which were designed to burn about two minutes or so, and used them to blind the French bunkers while the Germans attacked with shaped charges and grenades. Two bunkers were quickly knocked out and the engineers were able to cross the road to the south, where they began maneuvering against the artillery casemate. 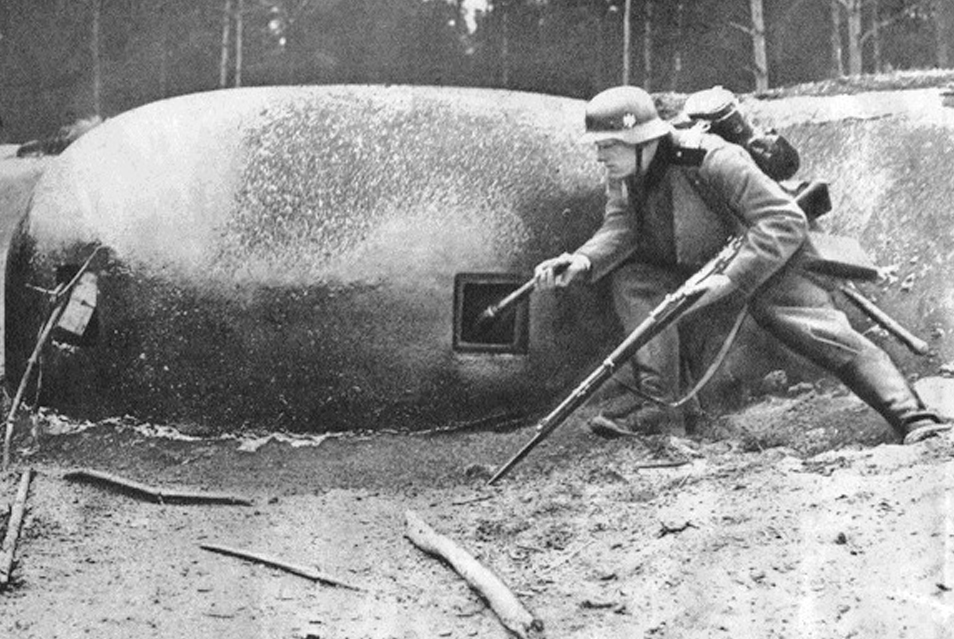 The casemate was the key emplacement of the French position along the Meuse at Sedan. Its multiple 75mm guns commanded the entire river bank west of Bellevue as well as the approaches from the east. It also guarded the road leading south to the Bar River Valley and tank country. Plenty of burning tanks and vehicles on the north bank of the Meuse showed that it had almost singlehandedly stopped the approach of the 2nd Panzer Division from the that direction. But several tanks had scored long-range hits on the casemate and knocked out some of its guns.

Korthals’ engineers moved up behind the casemate, drawing the attention of the French defenders inside. As tank fire continued to pound them, the sight of German soldiers moving on their rear caused the French to abandon the position and haul ass to the south. Having cleared the crossroads for the infantry, the engineers moved west toward the village of Donchery, attacking small bunkers along the riverbank and circling behind the larger emplacements on the hills to the south to silence them from the rear. 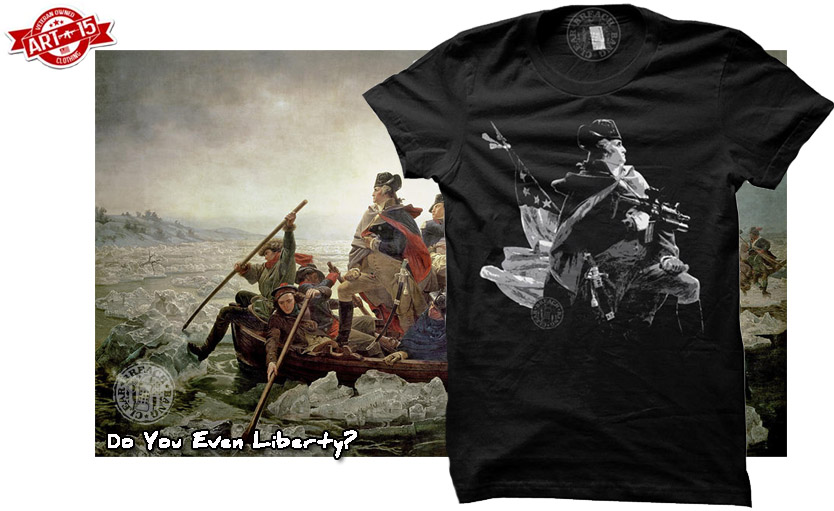 In all, Korthals and his two engineer platoons took out eleven major bunkers, including the artillery casemate, and “numerous” field works, all on his own initiative. He opened the road for the 1st Rifle Regiment, which proceeded to push south through Frenois into the Bar Valley, setting up the breakout of the 1st Panzer to the west the next day. They also knocked out the opposition to the infantry elements of the 2nd Panzer Division, allowing them to cross and prepare the way for the tanks to lunge west from Donchery. Incredibly, the engineers did not suffer a single casualty in the process. 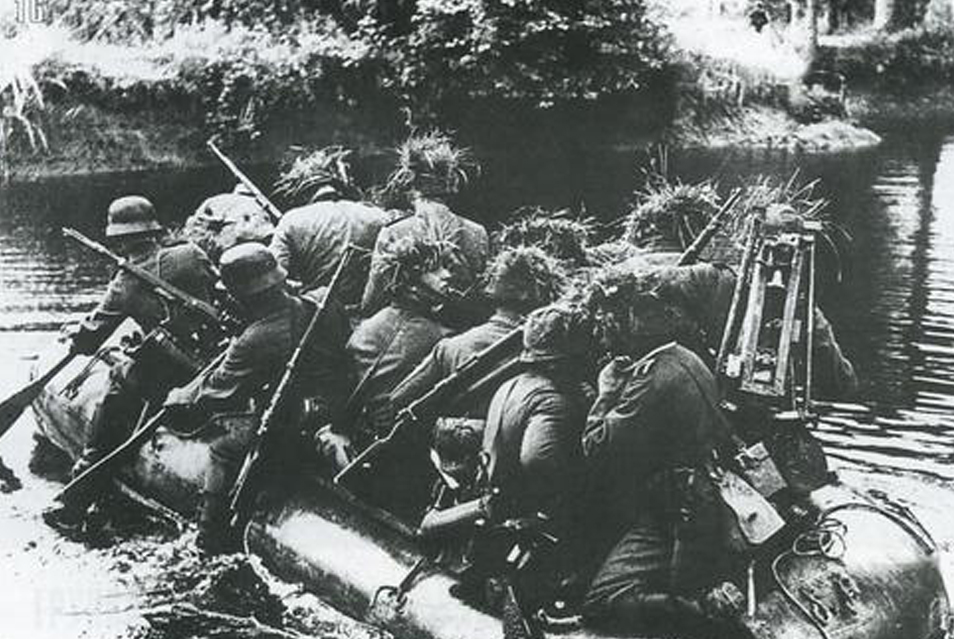 The German victory at Sedan was one of the most pivotal in military history. It made the famous “Dash to the Channel” possible. Sedan is a fascinating battle full of “what ifs” and razor-thin margins. It literally could have gone either way during the first 18 or so hours. Without the gumption of an engineer lieutenant and two platoons of highly-trained troops who grabbed the initiative by the throat and shook it until it cried uncle, it is entirely possible that the tanks of Heinz Guderian would never have even made it across the river. If the tanks didn’t cross the river, the whole damn show would likely have collapsed and France stayed in the war. Yeah, Korthals and his engineers fought for a crappy cause. But damn they were good soldiers, and their actions at Sedan are a model of auftragstaktik at work on the tactical level. 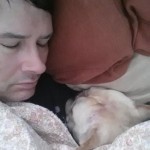 warriors from Ancient Greece to the modern day, with a special emphasis on World War II. He has an unabashed love of the USA, military surplus bolt action rifles, AK-47s, and Walther handguns. He despises incabination and likes hamburgers, dogs, and cigars, but really who doesn’t? Sissies and vegans, that’s who. Bucky contributes to Strategy & Tactics Press and is currently tiptoeing barefoot on the razor’s edge of his Masters Degree in Military History, after which he will probably proclaim himself an academic and wear one of those jackets with the patches on the elbows. Could be he’ll run down a PhD, maybe he’ll go hunting instead — Bucky likes the charred flesh of something that once had a parent, especially if he killed it himself. He is currently trying to figure out a way to export Texas politics to his native Virginia. Breach-Bang-Clear readers who talk to Bucky will be happy to know he’s only half the redneck he sounds and really isn’t inbred at all. Or not too much anyway, which is why he gets along so well with our other polrumptions. You can find historical bibliognost on Linked In here. 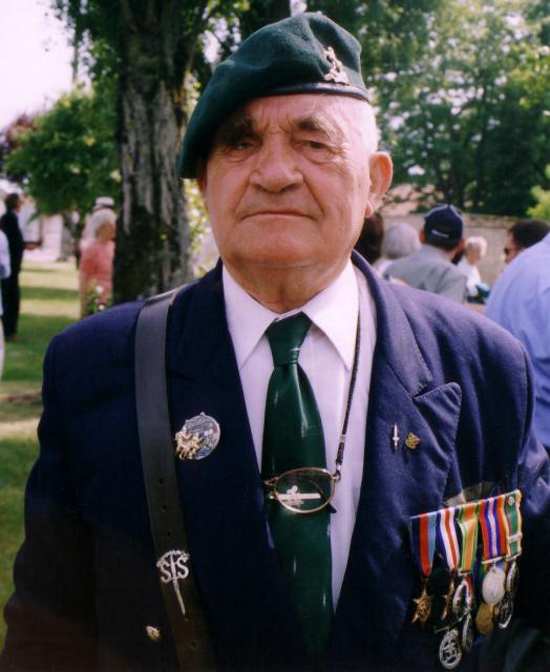 A Bucket of Balls & Backbone like a Boss – Trooper Stan Scott

4 thoughts on “Günther Korthals: Grabbing the Initiative Like a Boss”