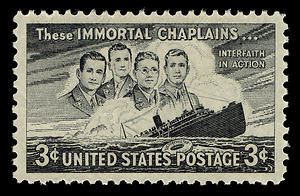 Today isn’t just Super Bowl Sunday. It is Four Chaplains Day, one of the lesser known but by no means less deserved holidays that military personnel should remember. Please share with ALCON. Today in 1943 US Army Captains Washington, Poling, Goode and Fox were KIA aboard the USAT Dorchester, on whose decks they organized and provided comfort to the survivors of a torpedo attack. The Chaplains gave their life jackets to soldiers who did not and did not survive when the vessels sank.

Captain George L Fox, a WWI veteran who’d been decorated for bravery and whose son was in the Marine Corps, was a Methodist Chaplain.

Captain Alexander D. Goode was a Rabbi with a Ph.D. from Johns Hopkins University who became a Jewish Army Chaplain after the attack on Pearl Harbor.

Captain Clark V. Poling was the sun of a WWI Chaplain who entered the Army as a Baptist Chaplain at the beginning of WWII.

Captain John P. Washington was assigned to the 76TH Infantry Division, a Catholic Chaplain who also received his commission shortly after the attack on Pearl Harbor.

On 03 FEB ’43, the USAT Dorchester was torpedoed by the German submarine U-223 off Newfoundland in the North Atlantic. The Dorchester, a civilian vessel built in 1926 as a cruise ship used as a troop transport, was part of a 3-ship convoy en route to Europe. There were approximately a thousand souls aboard, counting embarked personnel and crew.

The torpedo killed the ship’s electrical system and left it completely dark—as she began to sink, many of the men aboard panicked. The Four Chaplains took off their life jackets when the supply ran out and handed them to other men. They then assisted as many survivors as they could into life boots, then linked arms and, singing hymns and saying prayers, went down with the ship. Men in the lifeboats later advised they could hear prayers in English, Hebrew and Latin until the vessel went under. The Dorchester sank in less than 20 minutes. 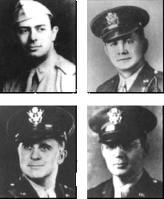 “I could hear men crying, pleading praying. I could also hear the chaplains’ preaching courage. Their voices were the only thing that kept me going.” (Pvt. William Bednar)

Approximately 700 men died, some trapped below decks, hundreds more having succumbed to hypothermia in the water.

Because the requirements for the Medal of Honor require that heroism be performed ‘under fire’ they did not qualify. They were therefore awarded the Distinguished Service Cross. A subsequent act of Congress established the Four Chaplains Medal, which was awarded posthumously to the next of kin of each of the Four Chaplains.

In 1988 03 FEB was established as Four Chaplains Day by a unanimous act of Congress, including the authorization for flags to fly at half-mast on this date.

Take a moment today to remember the loss of these 700 men, the valor of those four men of the cloth, and the families of all the fallen we’ve lost (including those who were killed yesterday in Texas).

Go in peace Chris, we’ll see you on the other side.