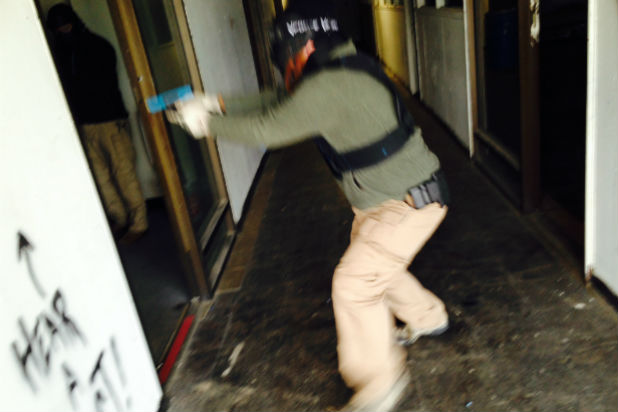 Today we present the second part of the Sage Dynamics Citizen Response to Active Shooter AAR written by one everyman example of a burgeoning responsible armed citizen. Part 1 is here if you missed it. Mad Duo

Let me preface this with some advice. This is the second part to a two-part after action article about a Sage Dynamics “Civilian Response to Active Shooter” course. If you haven’t read the first part, I would highly recommend it, as some of you are not going to understand a damn word I’m saying (or at least won’t have it in context). Do your homework! Oh, and as a reminder, I’m no expert (which was the point of me going) – I’m going to pass along what I experienced and what I took away from the class. Some of this you may know, some you may disagree with.

First, touching on where I left off- what I observed about stress reactions in the body. I had talked about how different roles in the event of an active shooting and how differently individuals may react. For example, when the aggressor sees someone that is coming after him, he may not be as afraid of dying as much as he is of failure, so he’s more likely to start shooting more people, or (and this happens frequently, including last week at Ft. Hood) give up and kill himself so someone else can’t.

The bystander is most likely terrified- some may be to the point to which they revert back to basic animalistic instincts, being more likely to trample each other trying to get away from the threat, or some may not know how to react and freeze completely. The responder is even easier to predict- he’s going to move towards the threat. Whether it be to talk the person down (which is usually not the brightest idea unless the situation calls for it, like if the shooter has hostages), or take the threat down completely, his body chooses the fight response when he goes into ‘fight or flight’ mode. Being that this was training, we (the students) already somewhat knew what to expect as far as the scenarios went- however not knowing exactly what was going to happen did allow us to experience some of these fight or flight responses from all aspects.

Everyone was split into groups of either 3 or 4. Each group would get one scenario to go through, everyone else would be role players. The responders would sit downstairs, away from the practice floor so to speak (out of earshot range), and one person at a time would walk upstairs into whatever scenario that team had. At the end of it, we would rally, discuss how that particular student did, and set up for the next responder to come (same scenario keep in mind, until all members of that team had went through it). None of the team members knew what scenario they were going to get and had no idea what to expect; this is great because you don’t always know when Scumbag Steve is going to decide to shoot 20 innocent people at the mall because his favorite ramen flavor was sold out and he hated his life.

Always be prepared- Scumbag Steve could be anywhere.

From the bystanders perspective, I learned just how crazy they can be. They don’t think, they don’t rationalize, they just run. They don’t care who they step on, they just want away from the threat. This obviously makes it difficult for the responder to get through the crowd (or get information about what is happening, where is the threat, etc), and provides a much larger target for the aggressor- crowds are easier to shoot than individual targets.

I also got to see how different amounts and types of training affected each person’s reactions in the scenarios. In one scenario, we staged a doctor’s office. Many of us role players were waiting in the waiting room when our soon-to-be responder walked in to get a prescription filled. A few seconds later, another man walked into yelling to see the doctor, whom he was angry with. This was our aggressor, and he was wearing a bulletproof vest. As soon he presented his weapon and shot a bystander, our responder immediately drew his gun and emptied a full mag into the aggressor, without seeking cover, successfully ending the threat with several headshots. The responder reacted without a second thought with very quick, clean movements.

However, in the same staged scenario but with a different responder, when the aggressor started firing on the bystanders, this particular responder sought cover behind the front desk and was firing from a low position. The responder was getting many shots to the torso and the legs, but the aggressor was instructed not to go down unless there was a headshot. After the responder emptied both of his mags, the aggressor was still posing a threat. With no ammo, the responder quickly decided to catch the aggressor off guard when he temporarily stopped firing- he waited for a seconds and then tackled the aggressor and disarmed him.

At the end of both scenarios, we were discussing the body armor this aggressor had. The first student acting as the responder immediately recognized the body armor, partially because he was a cop and that is what he had been trained to do. The second student did not immediately notice the armor, due to being more focused on the aggressor’s weapon; this student was not in law enforcement, but rather just someone who enjoyed firearms training and was focused on personal and home defense. This highlighted for me the importance of expanding my training into different fields to better my variety of skillsets. 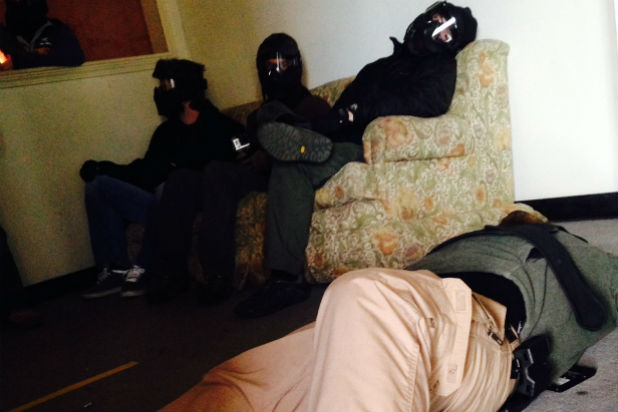 Except for when I was acting as the “responder” (the concealed carrier near the “incident”) I remained in place as a role-player the whole time. Though taking a turn as the aggresor would have made a great picture, a 100-pound female firing at the multitude of large bearded men (most of them several feet taller than me), staying place as a role-player allwed me to move around and constantly observe the reactions of the other students within their respective scenarios. I also took video of all the students so we could all go back and observe ourselves, the mistakes we made, and the awesome ‘SEAL-slide’ that may or may not have happened during one of the scenarios.

After each scenario when we discussed the unravelings, we all got to hear feedback from the aggressor as well as the responder, so I did still hear from the aggressor’s persepctive. What I noticed is the aggressor was in a different mind set each time.They had more control of the situation to begin with, and they could care less if they were shot. They just wanted to cause havoc as much as possible before going down. The responder avoids getting shot, using cover when he can, because he can’t help anyone or stop the threat should anything happen to him. The responder was also more conscious of the amount of ammo he had, mainly because he only had two mags (the typical number for shooters carrying concealed). The aggressor on the other hand will usually plan his attack and will most likely have much more ammo (and possibly multiple weapons), so he doesn’t worry about conserving it. 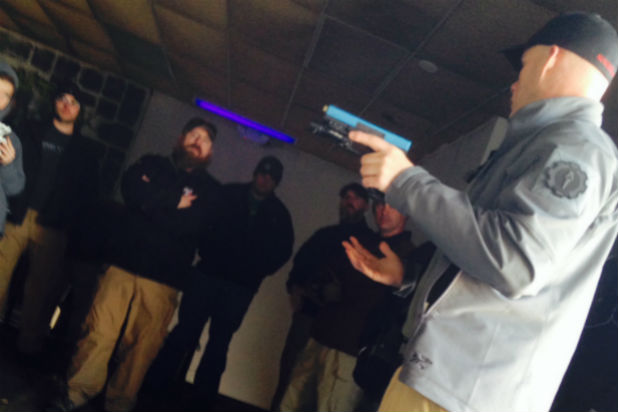 Some say paintball and airsoft can be great outlets to mimic real life scenarios for training purposes- however pain is the best teacher and sims provides the most realistic taste of that. Considering sims training is a rare treat for many in the military, less frequently accessible for law enforcement and nearly unheard of for citizens, this class from Sage Dynamics is very unique. Not only was this sims training class taught by a well qualified and experienced instructor, but it is also open to citizens with no background in any type of LE/military and is focused on things that could happen to citizens in their normal day to day routine.

I enjoyed myself and learned a lot – at least enough to realize I have a long way to go.

Sage Dynamics also has many other reality-based training using sims. You can check out what they have going on at their website, visit their facebook page, or watch videos of training on their YouTube page.

About the Author: Guest writer Kate Schooley is a 22-year old (21 when she took the class) “everyman” who has recently begun to more actively train and prepare herself for a worst case life event. Currently a college student pursuing a degree in nursing, she may well be the first garden gnome ever hired in an ER (she claims she’s 5’4″ tall “and growing”, but that seems like an exaggeration of at least a foot). To date she has attended a Greenside Training tracking class, one Victory First shooting class and a Dark Angel Medical class. She is serious when it comes to training (but is admits to being apprehensive every time), eats approximately twice her own body weight every day and has loves White Cheddar Cheezits with a great and terrible love. Watch for further AARs and equipment-related commentary in the future as she chronicles her training. 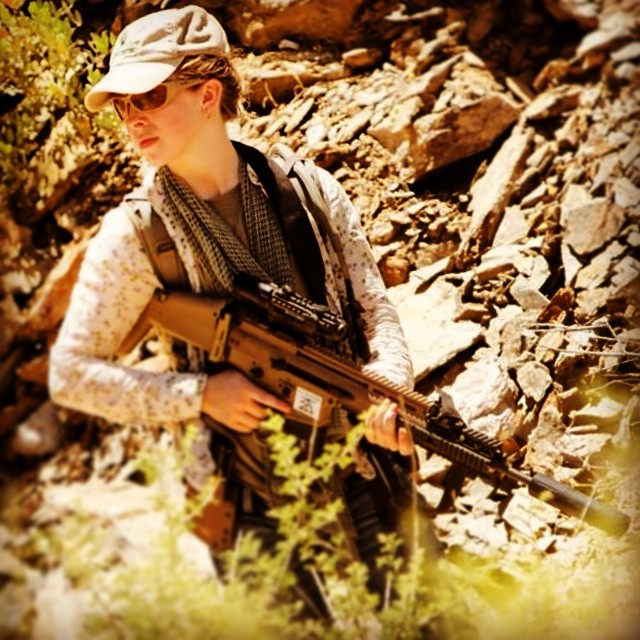