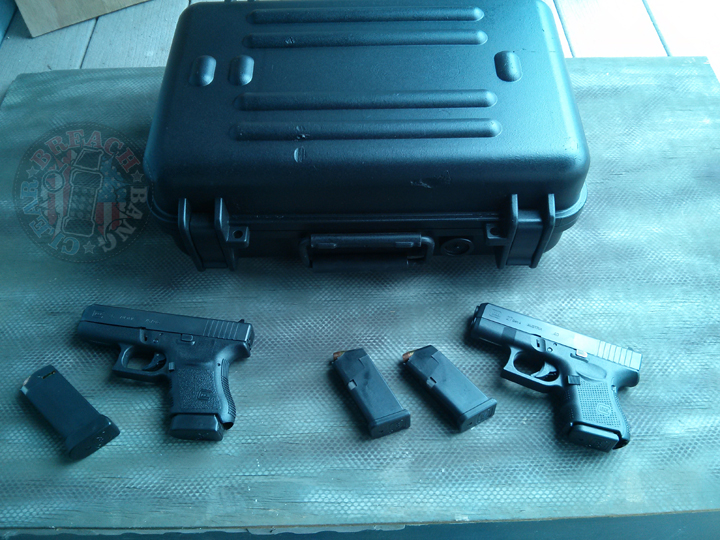 One of our wretched, groveling minions handlers (we call him Hondo) was sitting around the beer garden with me a couple weeks ago, shooting the breeze and admiring fat chicks. Hondo told me he’d recently run across and bought some old NVG (Night Vision Goggle) hard cases. He lives down in Texas which is probably part of the reason he has that ego of his. Texans…what to do with those guys? Now Hondo is a former bad ass (more so in his own mind, slightly less in mine) so in true FAG fashion (Former Action Guy) he has this idea of turning those NVG hard cases into personal gun cases. Hondo wanted to know if I wanted take a peek on how he was going to do it. He said it would be a quick and easy process, and amazingly he was right (the boy isn’t much more than dick and backbone, and he’s not terribly bright). It was pretty simple, and it works pretty good. I put together a quick step by step with some pictures for those of you might be interested.

First thing he wanted everyone to know was this was his first attempt, so you can’t expect it to be 100% flawless. Since that first one he’s made another that looked pretty stellar (if he does say so himself).

First you need to get an old NVG hard case. This one was a little beat up, but for $5 he couldn’t pass it up. Hondo was making this case to fit a Glock 27 and Glock 36 both with extra mags. His intent was to have a mag in the gun and be able to store two extra for a total of three for each. Right now he only has two mags for his Glock 36, (go ahead and make fun of him – every real man has 10 magazines, at least two of them extended…if not a drum) but made the slot for the extra anyways. To get the show going he pulled out some good ole Plastic Dip (he loves plastic dip). If you don’t know what that is, go to Lowes or Home Depot and get you some. Even if you don’t need it. It’s only about $5 a can. It used to be made and still is made in putty form. You usually use it for dipping handles of screw drivers or pliers to get that rubber coat grip. Now they make it in spray can form.  He used that to paint a coat on the hard case to change it from that OD Green color to a solid flat black.

After the case had a few coats of black Plastic Dip put on and was dry it was time to move on to foam. He removed the hard inserts that come in NVG hard cases. That just pulled right out. Next he measured and trimmed some foam from a local furniture shop. The shop had extra pieces they hooked him up with, mostly because they saw me with him and thought it might turn bad if they didn’t. Slim is a shady looking fella so we don’t blame them. Anyway one of the foam pieces was pink and the other two were white. Both were plenty firm, but Hondo suggests you go (non-pervert) and feel them up. You know, get the firmness you want. Like with a fat chick. I’m not going to lie, he to elbow me a few times for getting into the feeling part a bit much…I kinda liked it. After he’d measured and cut down the foam to fit he pulled them out for some color. The pink piece of foam was the thickest and was used for the top section. The bottom section was comprised of two thinner pieces of white foam. We will get to that later. 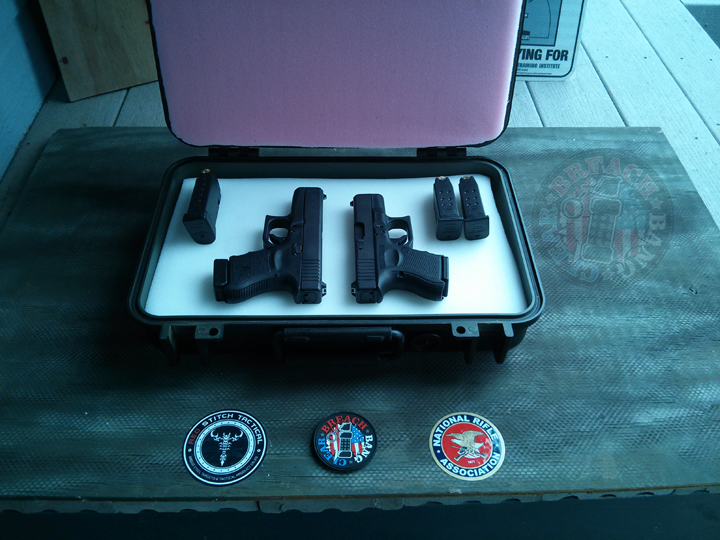 “Before you do anything else,” he says, “make sure you trace the outline of whatever you are wanting to store in the case.” (Like I wouldn’t have figured that out. He acted like I was drunk…which I was, but that’s beside the point. Anyway Sharpie was busted out and outlines made. 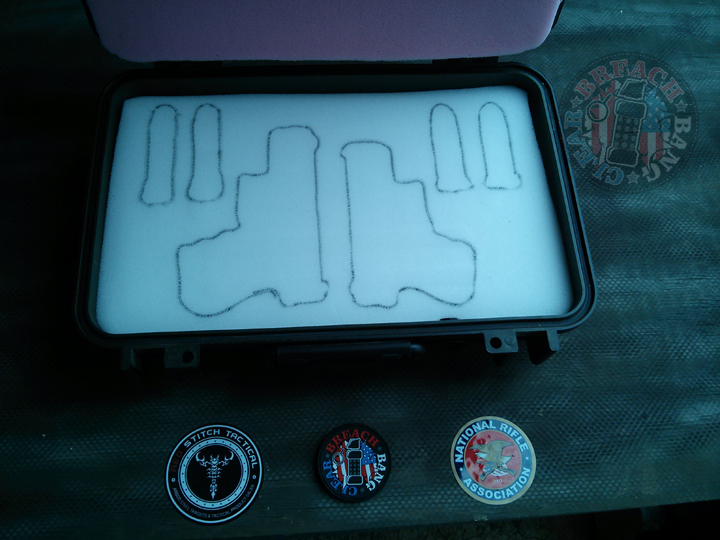 Remember the two white foam pieces for the bottom? He cut out the outlines on one of those pieces too, leaving him with one solid piece and one with outlines. He advised he was going to put them together with some Loctite Spray. I wondered why he had Loctite in a box with ‘personal lubricant’ and two AAA batteries. 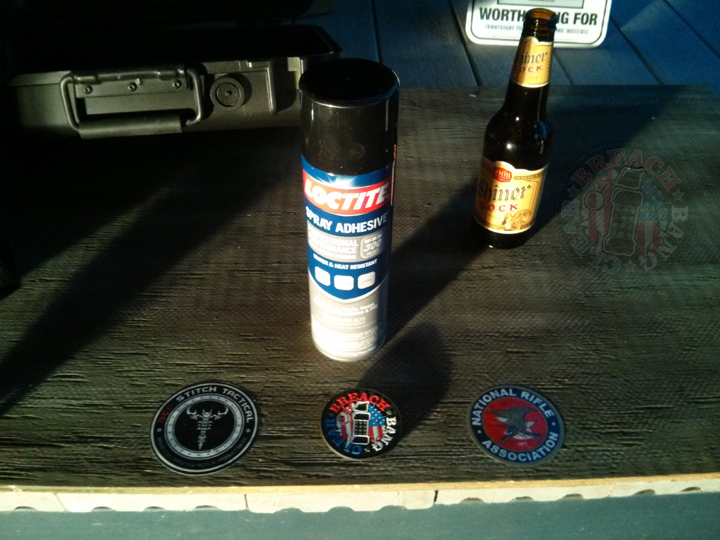 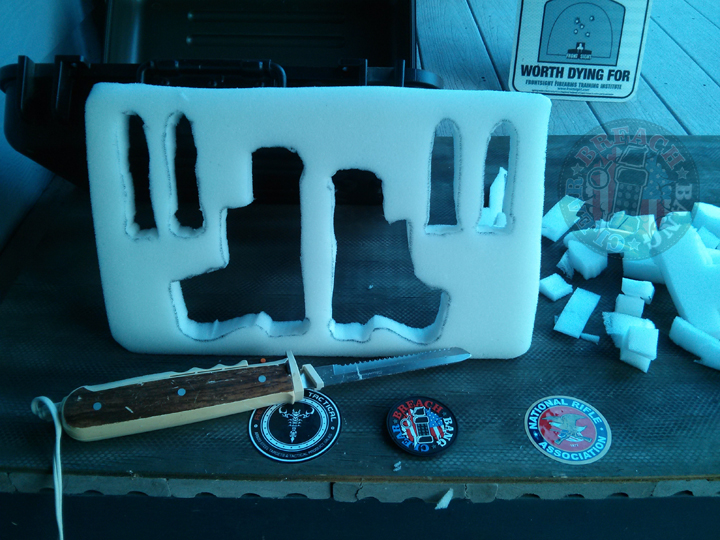 The cutting it isn’t as smooth as you would think should’ve been doing it by hand. Hondo admits if he had a smaller cutting device andmaybe hadn’t have been drinking it would have been a lot better, but he improvised and overcame. Before he sprayed the two pieces together he again went to his trusty Plastic Dip spray.

“It doesn’t make the foam too hard like spray paint will,” he said. “This is where it can get tricky. You don’t want to just throw on a few coats and let it be. You need to put each coat on from different direction to make sure it covers all that foam. Since foam is like a sponge it has tiny holes. So make sure if you put the first coat from left to right, put the next from right to left, then go from top to bottom and bottom to top. Then top it off with going at a 45 degree angle across it. That should be about 5-6 coats and it should be good. BUT make sure you aren’t too close and cake it on or it will get too hard.”

It’s like he’s an idiot savant of foam and Plastic Dip. 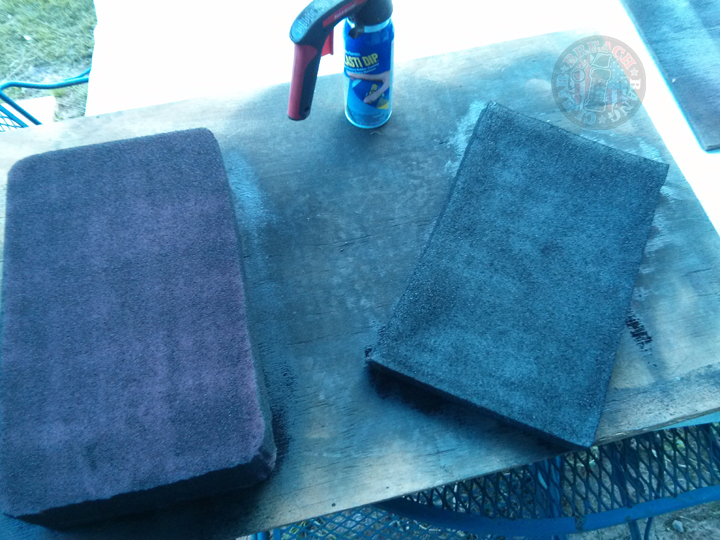 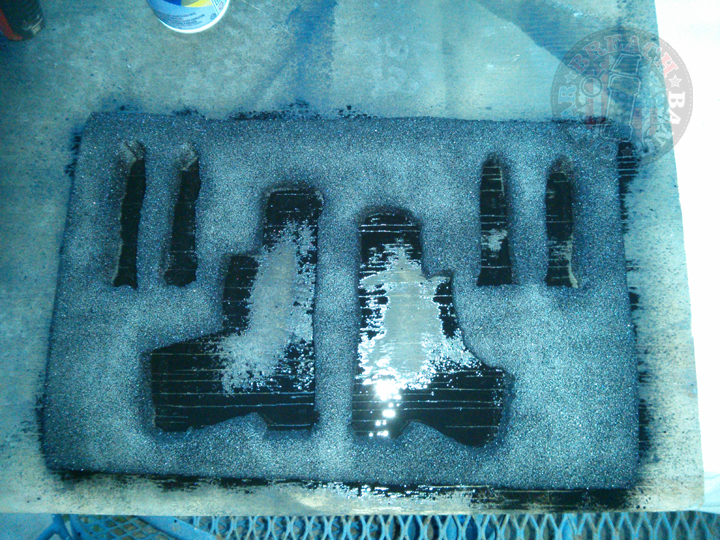 After all that dries is when you want to spray the Loctite adhesive on the two formally white pieces. Your ending product should look like this, but better hopefully. 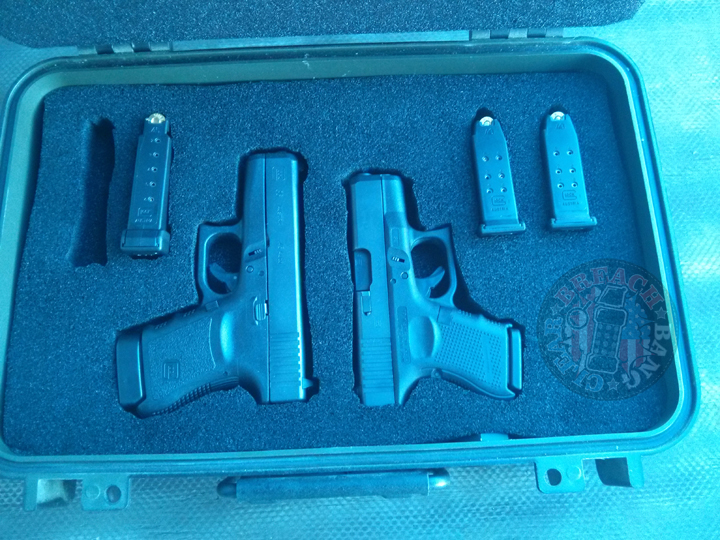 Truth be told Hondo learned some lessons from this first project and has since made a better one for his Glock 22. He even painted camo schemes on a few for kicks.

All in all the whole project cost about $15-$20 when it was said and done. Well, actually add another $20 for a case or so of beer if you’re going to do it the same way he did. Granted it’s not a Pelican case or any of the other high dollar, top-of-the-line cases but it will definitely serve. He basically saw a few NVG hard cases, bought them for $5 apiece, bought some $5 Plastic Dip, picked up a $5 Loctite Spray and made some simple storage cases for home or travel. It’s hard to argue against that. The case is solid with a weather strip and pressure valve. Throw some good foam and a paint job (camo paint job optional) and you have a good piece of D.I.Y. gear. If you have any questions or other ideas Hondo said he would be more than happy to answer any questions. You can reach him at jd (at) gunfightertactics.com or on Twitter @jdwallace03 . He’s a partial loser because he doesn’t use Facebook (or “Facecrap” as he calls it). He tends to

stick to nerdy Google+. “To each his own, goober!” is what I tell him.

If you e-mail him, ask him how Team Leroy is doing. 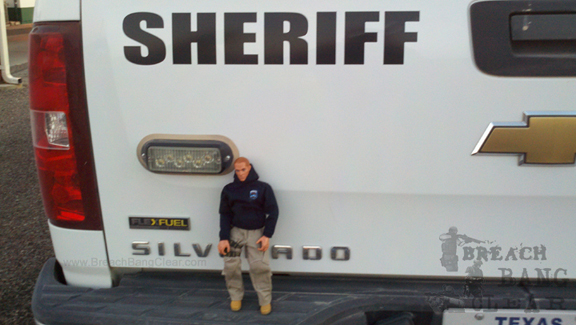