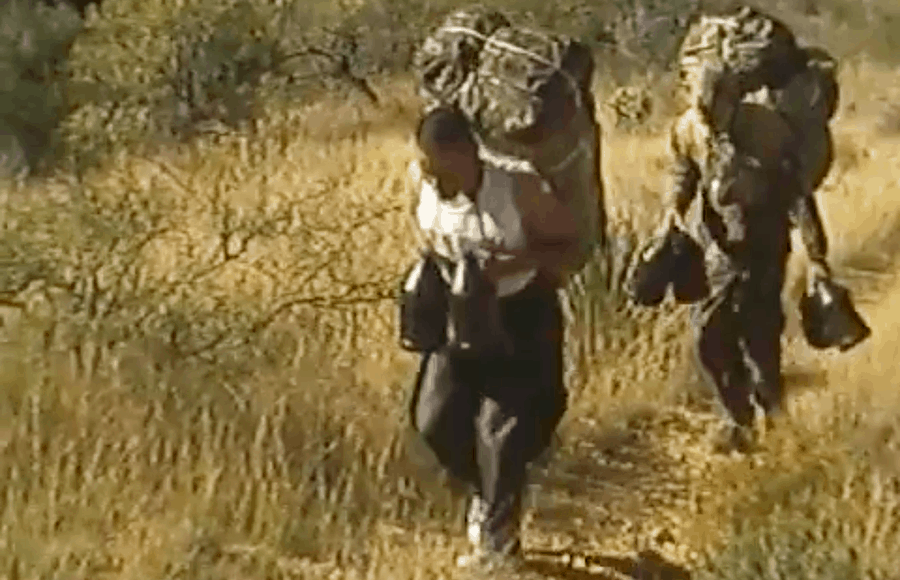 A direct example of recent activity, and why it matters.

The images and video you see below were taken just after first light during the first few days of August. The team was, in this particularly case, hauling several hundred pounds of marijuana. According to reliable sources, they crossed the international border with Mexico some five miles west of Sasabe, Arizona, after first scouting for routes and testing for reactions of technology or sensor equipment. Extensive surveillance of both local law enforcement and area residents was conducted prior to the movement, though this is a matter of course. They then traveled into the Tohono O’odham Nation and secured the load at a stash house for later transport and distribution via Highway 86.

Caborca, Sonora, Mexico, remains the operational control hub for surrounding areas. Caborca is the regional seat for Caborca County. It has significant coastline along the Gulf of California. Drug gangs control routes from Caborca to points north, such as El Sasabe,  and El Bajio, which act as staging areas for drug smugglers entering the United States. The area from Caborca as far west as Sonoyta and east to Altar, then north to the border is a de facto no-man’s-land observed by military and law enforcement. LE or military movement in this area are conducted by large formations; patrols in the area are conducted by large, heavily armed convoys. They occur only sporadically, however, and most if not all times are clearly sanctioned by (if not operating under the control of) the Sinaloa Cartel.

The Sinaloa Cartel is one of the most powerful trans-national criminal organizations in the world (see UN Office on Drugs and Crime/UNDC and European Monitoring Center for Drugs and Addiction). It has been, as we have reported, training with Pakistani nationals, and regularly work with criminal elements on other continents (as recently witnessed by EUROPOL and the UK’s National Crime Agency with regard to Romanian criminal elements). 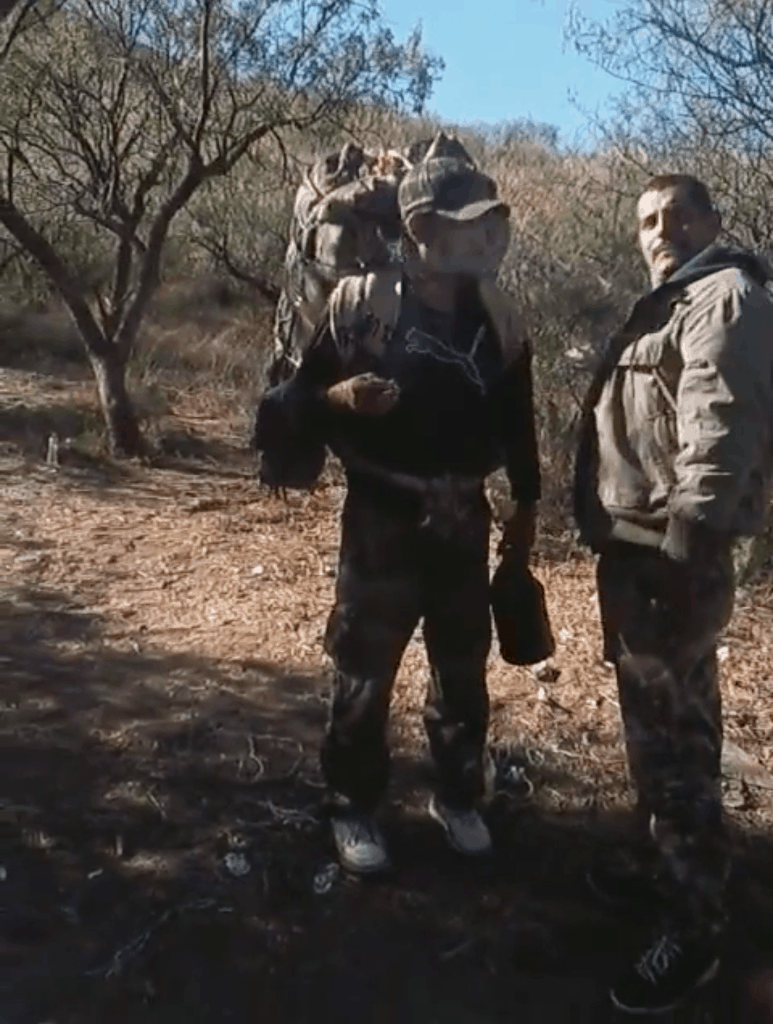 Although drug smuggling cartels are largely controlled by cartels, they continue to employ military tactics when escorting loads to staging sites along the international border between the United States and Mexico.

The primary method of controlling the load is referred to as a “gauntlet”, wherein they set up a series of scouts and OPs from the starting point through to the ultimate destination, frequently with heavier numbers or the equivalent of a QRF at the penultimate stopping point. OPs are typically spread no more than a kilometer apart, then are positioned with greater frequency and number closer to the staging area. This puts them in a position to support sicarios who are themselves staged in interdiction and intercept sites to dissuade attempts to hijack, divert, or seize contraband.

An example: a load steps off from Saric, Sonora, Mexico. Its final delivery point is La Ladrillera, on the southwest side of Sasabe, Sonora, Mexico (see further explanation below). 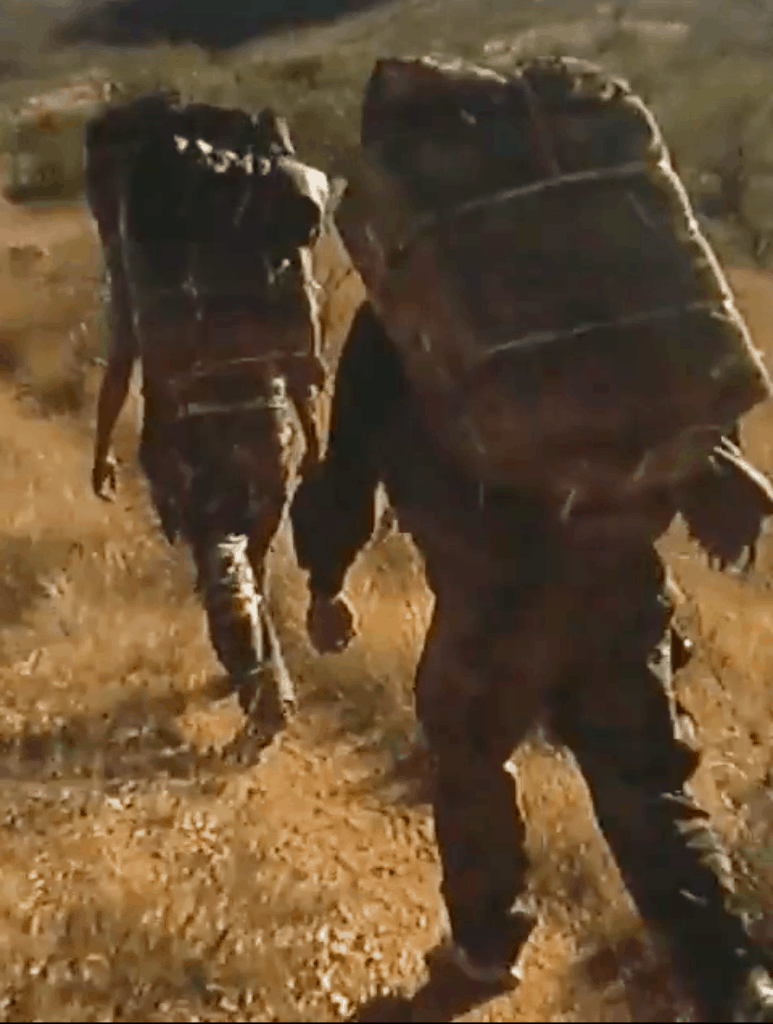 Cartel leadership typically sends forward scouts into the United States several days before an intended operation. Scouts report on patterns, movements, and trends of a) local law enforcement, b) the local civilian population, and c) typical area traffic patterns. In many areas there are long-established OPs from which 24-hour surveillance is conducted on the US side.

Cartel scout elements include at least one who is armed with a handgun or rifle. They utilize very simple comms, like hand-held radios and push-to-talk cell phones. They are equipped with optics (usually binoculars) and dress to blend in with local terrain and vegetation. “Mules” often wear Mylar around their torso and limbs with civilian clothing on the outside to mitigate their heat signature. Mylar material is easily obtained anywhere that sells survival blankets. Some have been apprehended while equipped with portable solar panels to recharge radios and cell phones.

Forward scouts often walk trails in advance of the smuggling element to trip sensors and observe how and where USBP agents respond, and in what strength.  Routes are planned to exploit terrain, particularly washes and gullies, which keep smugglers below line-of-sight of cameras and ground radar. Thorough knowledge of the area, extensive surveillance, and savvy use of easily accessible technologies allow smugglers to identify and avoid choke points likely to be more heavily monitored. It also allows them to predesignate sites where they can lay up to avoid air assets or “go to ground” to avoid ground agents or mounted patrols.

In some instances, with a high priority load of contraband or individuals, large groups of “civilian” illegals are forced across the border in large numbers as a diversion, predictably tying up local resources. 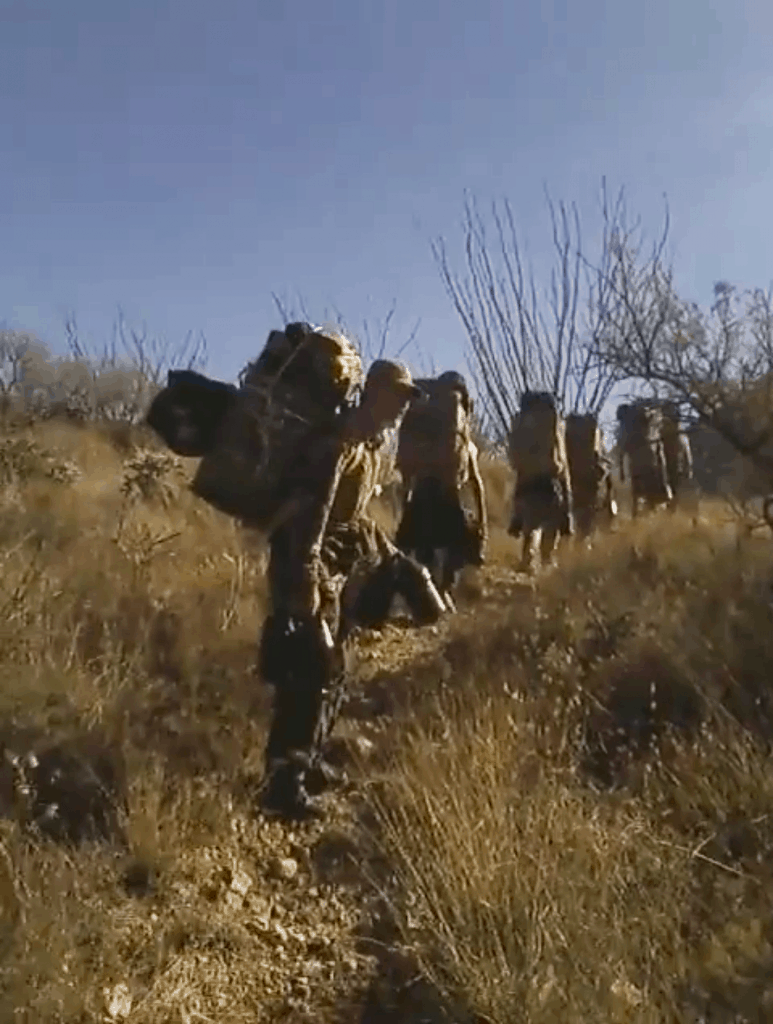 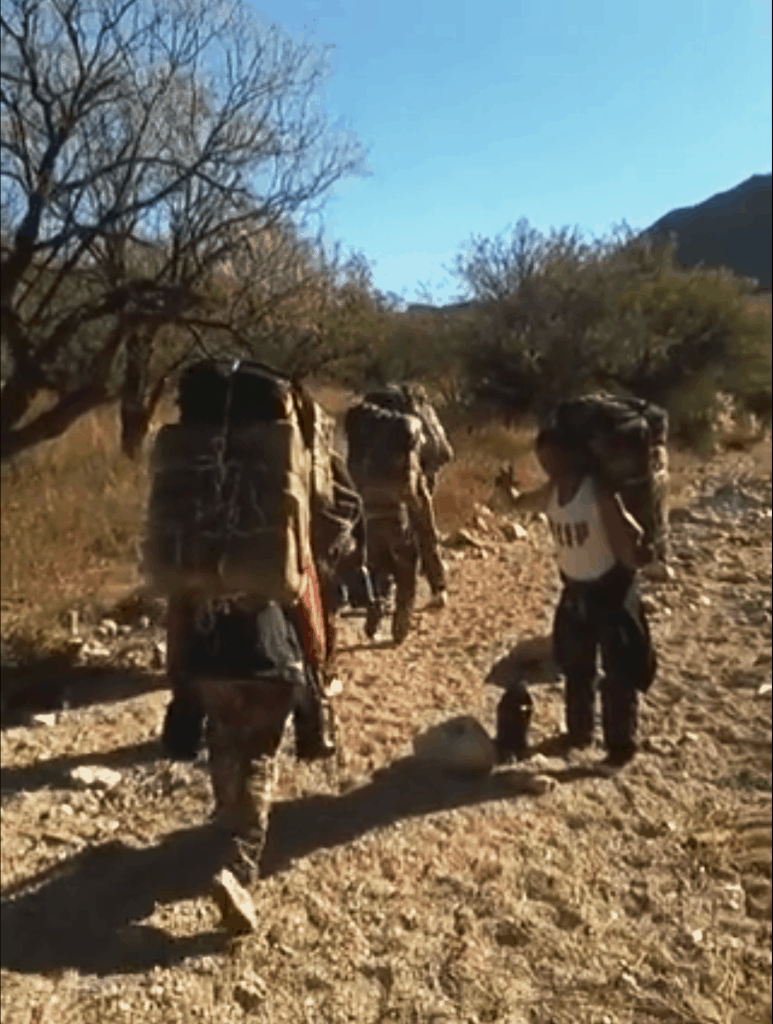 Movement to the Objective

Insertion begins only upon command of the lead smuggler, and then only after he receives an “all clear” from the northernmost scouts. Once the incursion has occurred, the group walks the route cleared by scouts, who have by this point gone to ground and established OPs along the intended route. If a scout notices a threat or discrepancy in his AOR, the smuggling element is notified and they react as the situation demands. Decoy runners (“rabbits”) are deployed if needed.

Save 💰 on the bestest, badassest boot brands.

Smugglers are followed by a drag element responsible for brushing out tracks or aging sign left behind.

An exemplar route from the Caborca-Saric-Sasabe passage would take smugglers along the ridge tops of the Quinlan Moutains and from there down into either the Tohono O’odham Reservation or east to Highway 286 into the Three Points area. Some sources have traveled this rugged terrain line all the way north to Marana or beyond, crossing Highway 86 near the Kitt Peak Observatory and bypassing Tucson. This can be continued the length of the Sierra Estrellas, culminating in the Phoenix metro area. 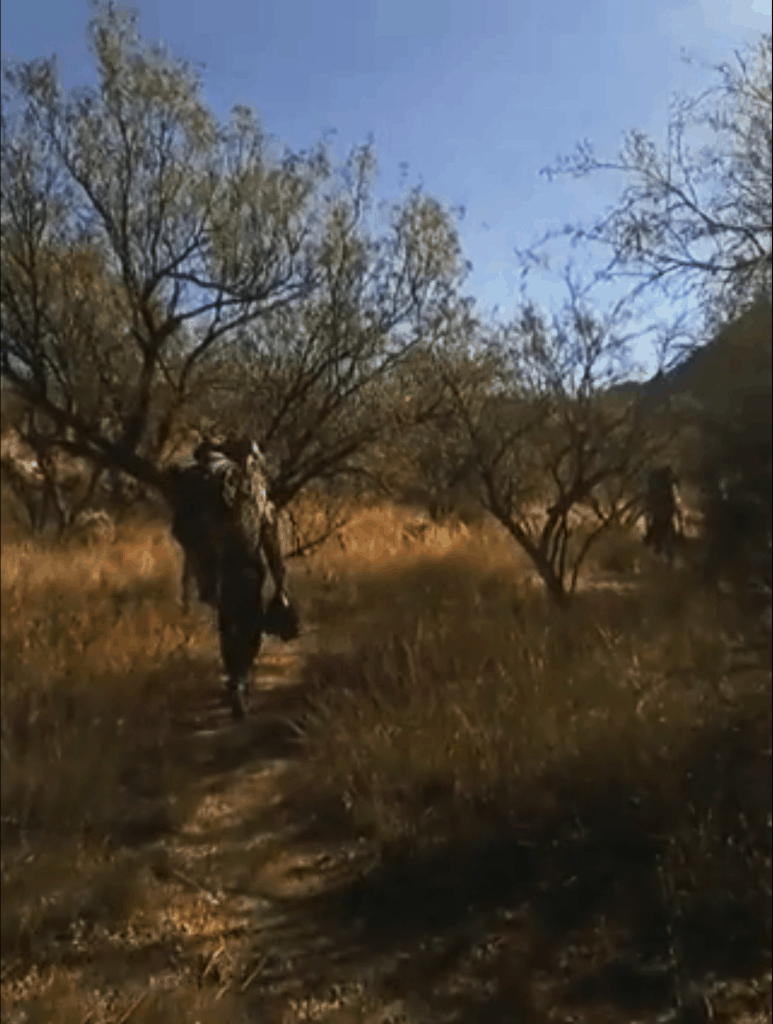 Our sources in smuggling groups report they are not hampered much by technology, which is more effective at detecting larger groups of illegal aliens.  LE aliens on the ground actively interdicting remote areas are more of a threat to them (agents aggressively working the east-west roads in the Patagonias, for instance, or the trails in the Coyote Mountains Wilderness Area. However, this is less of an issue than it once was with changes in USBP tactics that have made them far easier to monitor and avoid despite the substantial increase in personnel assigned to trouble areas. 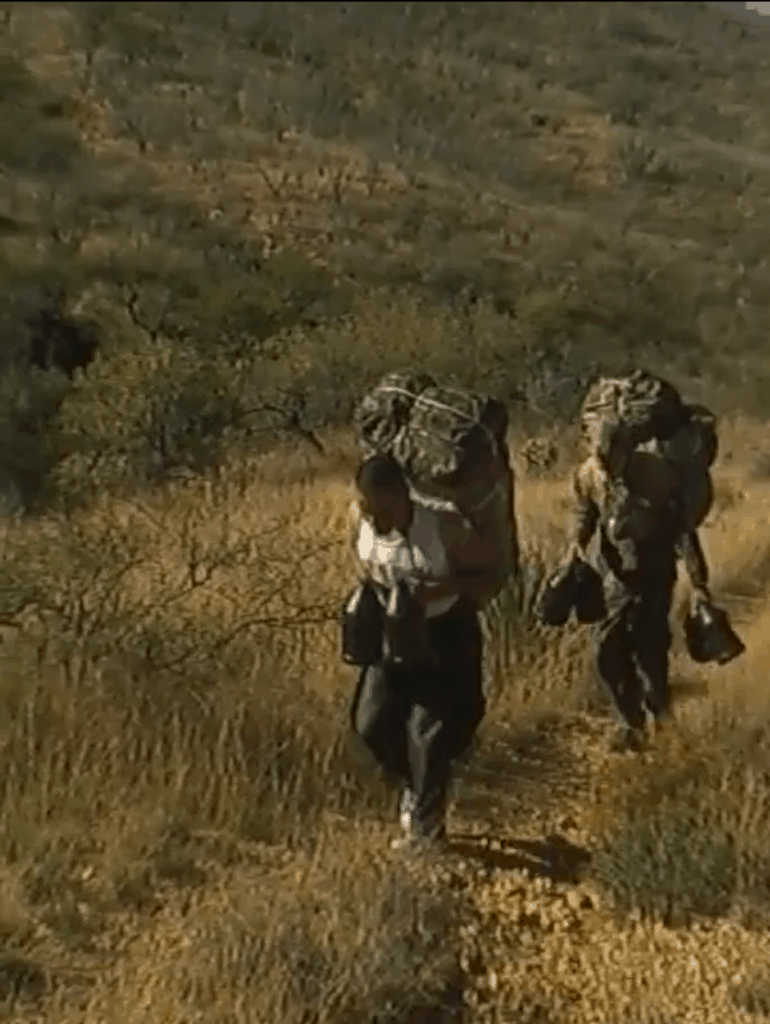 Saric is a small town adjacent to Highway 43, roughly 2/3 of the distance between Caborca and Nogales. Sasabe, Sonora, is directly across the border from Sasabe, Arizona. The Sasabe Port of Entry lies between the two. It is headquartered in Tucson. According to the Department of Homeland Security, Tucson sector reported some 65,000 arrests of illegal border crossers of non-Mexican nationality in Fiscal 2016. While the majority of that number is accounted for by people from Central or South America, they does include “special interest aliens” from 30-odd countries associated with terrorist groups.

This is by no means a problem exclusive to southern Arizona. In a confidential (leaked) report from last year, Texas reported the apprehension of SIAs from Afghanistan, Iran, Iraq, Lebanon, Libya, Pakistan, Somalia, Sri Lanka, and Syria. Among them were individuals with ties to al-Shaaab, al-Itihaad, al-Islamiya, al-Barakat, the Liberation Tigers of Tamil Eelam, and Hezbollah. 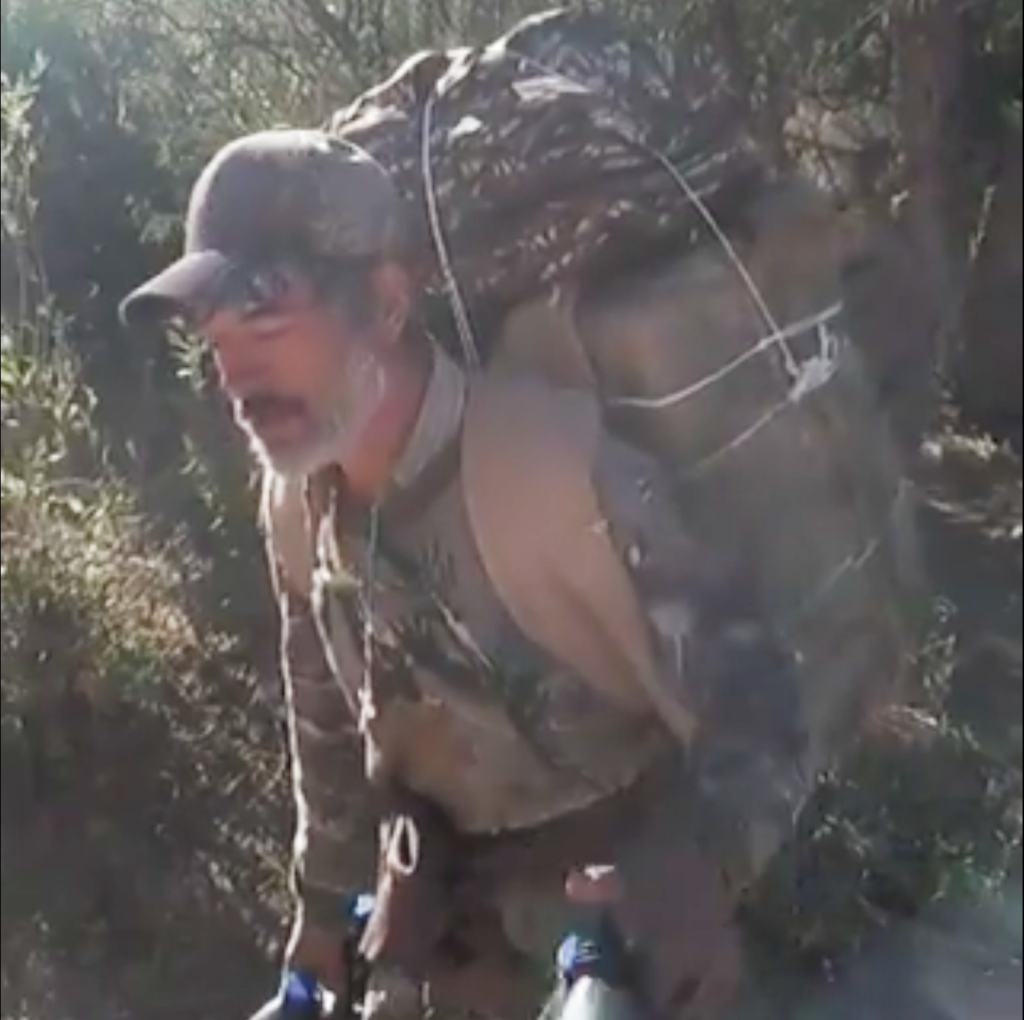 Why It Is Significant

Three hundred pounds of marijuana is not a threat to national security, nor should this update be interpreted to imply that. The relative impunity with which criminals can cross the border deep into the United States is a threat, however. The cartels are violent, sadistic, and unpredictable. They are as guilty of torture, murder, and depravity as any “terrorist” organization in the world, including ISIS and al-Shabaab. This is the primary reason why Mexico is a failed state.

Pragmatism dictates a porous border be effectively and practicably addressed. Allegations of racism and cultural insensitivity will seem ridiculous in retrospect, should Ouray, Colorado go the way of Beslan, North Ossetia, the Geiser Grand in Baker City, Oregon that of the Radisson BLu in Bamako, or  Cottey College that of Chibok School.

One should not conflate practicality with paranoia or jingoism.

About the Author: Jeb Maynard Benteen (a pseudonym) is a retired lawman now working a ranch deep in the heart of a border state. He is polylingual (that’s not a type of fetish, by the way) and consults for both a regional university and the occasional Federal agency. During a quarter century career — which we describe thusly to make him sound even older than he is — he worked all manner of assignments, from line officer to sergeant, with a number of specialty billets in between. He currently sports a sublime mustache-and-beard combo of such magnificence it would put any Civil War general to shame. This is, we’re given to understand, one of the best parts of being retired. Benteen has been recognized and decorated for duty related accomplishments several times. Alas, due to the nature of his reports and ongoing activities of assorted scoundrels in his area, we are unable to go into any detail. We can tell you he loves torta ahogada with a fierce and terrible love, however, and probably cooks it better than anyone you know (including your grandma).

Use our coupon code for fuck’s sake. You don’t wanna know what we had to do to get it.