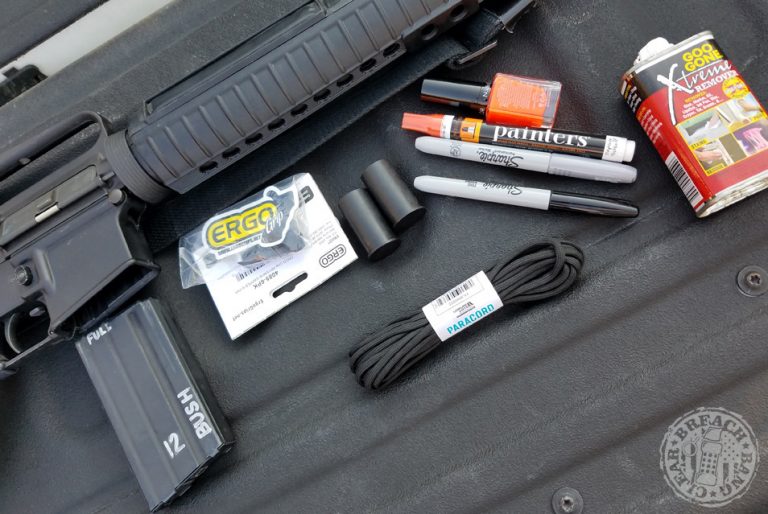 AR 15 mods: let’s talk about the DIY kind. Rifle upgrades are a Good Thing, and we should all be looking to make one…but you can’t always afford the higher end stuff (especially with what ammo costs these days!). So today we’re not talking about high dollar parts and accessories. Today we’ll discuss some of the best AR 15 upgrades we can think of for folks on a budget.

AR15 Upgrades on a budget

1. Mark your Magazines. We’re starting out with something that isn’t actually a rifle mod, but is as easy as it is important. Mark your name x2, magazine number x2, and loaded to XX number of rounds (x2). Yep, it seems like something stupid if you don’t do it, and it seems stupid simple to those that do but MARK YOUR MAGS. This way you know YOUR mags are YOUR mags. No arguments. My name is right there.

And when one goes Tango Uniform, you can confirm it’s the mag and flatten it.

And when you get in a shooting and the investigation happens, they know it’s your mag, can account for all your mags, and can account for your rounds. Otherwise, they keep hunting the two rounds you didn’t load, for a long time.

Magpul mags: get one or buy ’em in a damn ten-pack!

2. Mark your sight settings. When you get a perfect zero, mark your damned settings. People like to dick with knobs, adjustments, etc. And as much as we all say “No one touches my rifle because I never leave it unattended,” you may have to set it down in the office to take a leak, someone may borrow your patrol vehicle, it may get picked up off the rack at the range by someone who “mistakes” it for his, or you may just bump it. Who knows? But you can look and verify it’s where you left it and fix it if it ain’t. Why risk it? I use, you guessed it, a silver Sharpie marker. 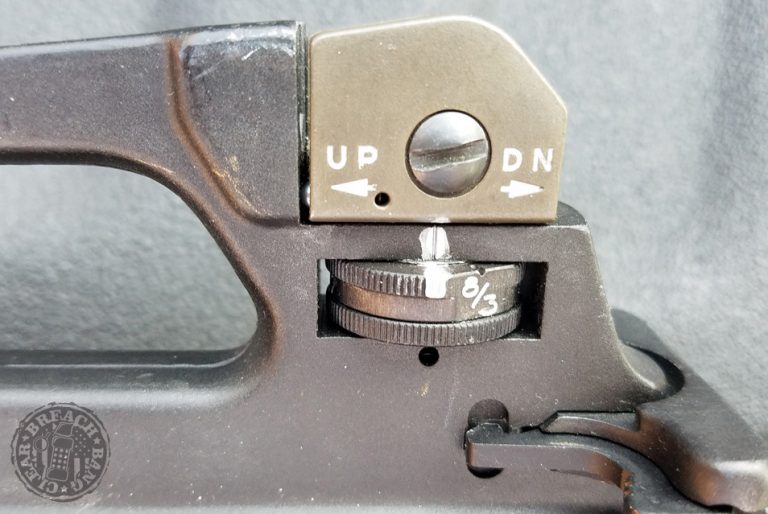 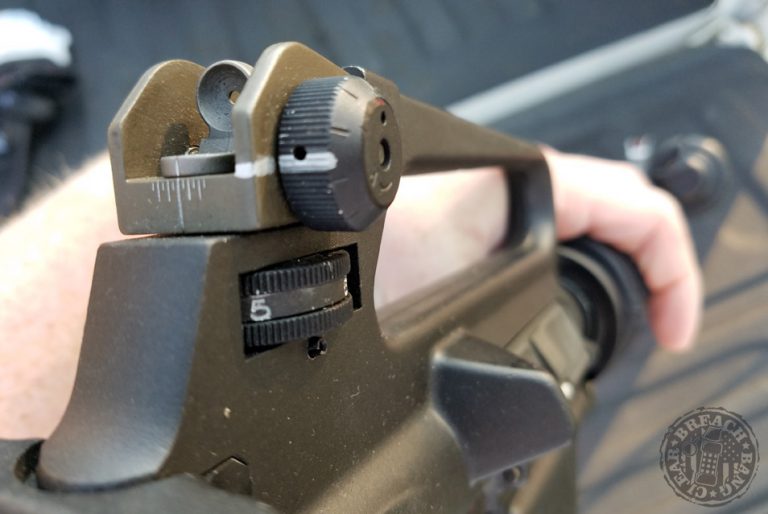 Cost: FREE BECAUSE YOU ALREADY HAVE THE SILVER SHARPIE YOU GOT FOR YOUR MAGAZINES.

3. The “Askins H” Front Sight. Col. Charles Askins was a gunfighter back in the day, and he used to tie a white bandanna around the muzzle of his shotgun so he had a poor man’s night sight. I use a silver Sharpie marker to paint an H on the front sight tower. In lower light you can roughly line it up using the top of the H as goalposts. Line him up, then activate your light. You know the rest. It also helps with the old recoil-had-me-looking-at-the-wing-instead-of-the-front-sight problem. It’s a common problem for new shooters and easily fixed with a silver Sharpie. You can thank my friend, the incomparable Ed Head of Gunsite, Down Range TV and retired Border Patrol Agent, for helping me figure this out. 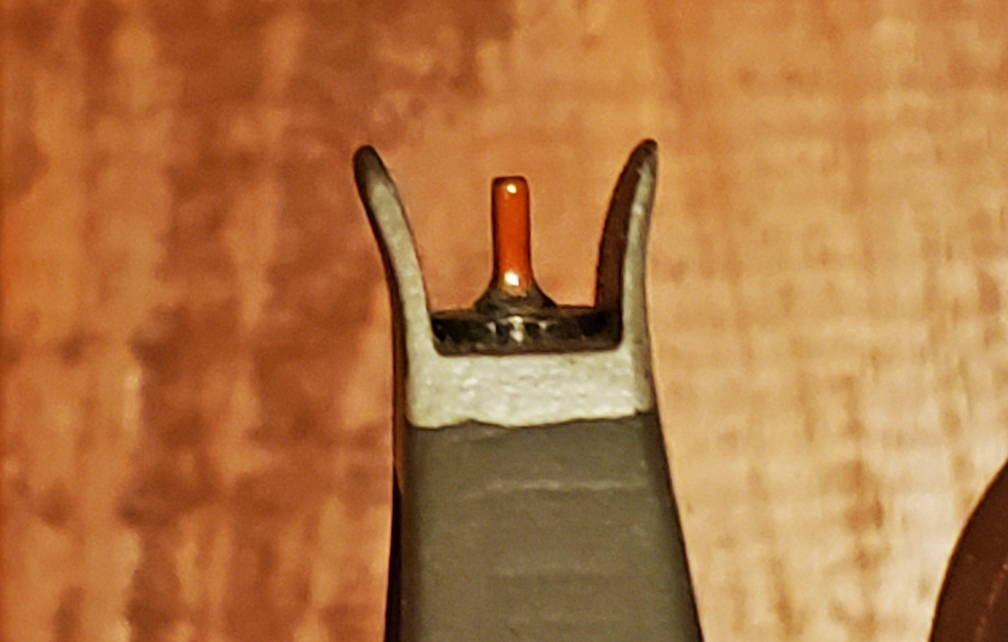 The Askins H. may be the simplest AR upgrade in this whole lineup. Take a white or silver marker to the wings of an AR15’s front sight post that has an orange or other brightly colored front sight pin. This was inspired by a story of Col. Charles Askins as told by Ed Head of Gunsite. Col. Askins used to tie a white bandana around the muzzle of his shotgun when out on night patrol. If a problem arose he would simply center the white bandana on the target and let ‘er fly.

Cost: silver sharpie marker for $2.50, or free since you already have the marker.

4. The Paracord Buttstock Sling Loop. This is so simple it hurts. Pull two screws, loop paracord around the screws with the knot in the storage compartment, and screw the butt plate back down. Now mount your sling. Now the sling fits off the side as opposed to the bottom of the butt, and it hangs right.

My old A2 has this upgrade, with an M60 sling. It works well as a two-point. I’ve set up SEVERAL state troopers and officers who were limited to agency issued milsurp A1 or A2 M16s. Those guys LOVE it. Some of the best bang for the buck right here. 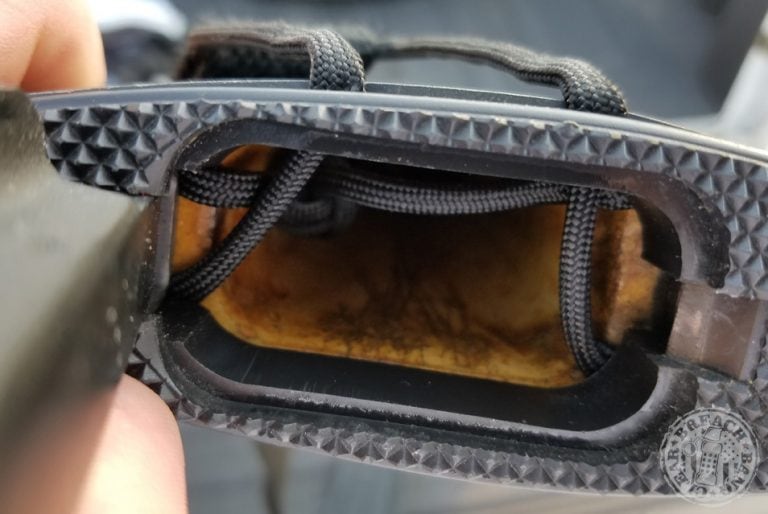 5. Chalk your serial number. This simple fix is something I like, it looks good, and your agency armorer and the qualifying instructor will appreciate it. When it comes time to account for fifty or so rifles for the yearly inventory or your one, two, three or four qualifications, those writing down the serial numbers will be done with you faster than everyone else.

All it takes is some paper towels, rubbing alcohol, Goo-Be-Gone, and the same silver Sharpie marker. Clean it, mark it, and remove the excess. Let it dry and repeat.

Cost: Silver sharpie marker you already have, Goo-Be-Gone or another solvent, and rubbing alcohol, about $3.00.

6. Shoot thru muzzle caps. So you track the guy ten miles deep in the woods and halfway there you trip and your muzzle goes point down in the mud. Is it safe to shoot? Are you sure? Did you bring a rod to clear it? You just hauled this 9lb chunk of steel and several pounds of loaded mags into the woods after an armed suspect only to wind up armed with just your pistol. Simple fix: put a shoot-through muzzle cap on it. If you go muzzle down the barrel stays clear. If you have to shoot through it, Nike up and just do it. Stay with the black ones, because tipping your lethal weapon with orange is, to me at least, STUPID.

Magpul mags: get one or buy ’em in a damn ten-pack!

7. ERGO GRIP Gapper. If you do any serious training with a carbine you’ll get that super annoying blister on top of your “bird finger” middle knuckle. Yeah, I know you want to get the Magpul this and that, and trust me I love Magpul (you guys are my spirit animal), but we’re talking super cheap and easy fixes. The Gapper works so well you’ll never understand how it’s not OEM.

8. Secure your damned sling. This was mentioned in the comments to My Patrol Rifle and Me. I pull mine rearward, wrap it over the butt and fold back once before securing it with a good rubber band. I do the same on my shotguns. You can run the rifle with it secured like this, it’s quick to deploy, and it cures the annoying sling flop. As one reader noted, it also makes for a safer exit from a patrol car as the sling can’t hang up. My normal carry is overhead in a rack and I let the sling hang there, as a personal preference, but when I drive another vehicle or my personal vehicle even at the house in the safe or with the home defense AR, the sling is rubber-banded away. I tend to use brightly colored rubber bands for visibility.

Cost: a rubber band, so maybe a penny?

Jocking your favorite carbine up? Put an optic on it.

9. Mark the top round of each mag. You ever wonder if a mag from your bag is topped off? You should NEVER EVER go out with less than topped-off mags. Yeah, you could buy windowed mags, or you can just count the proper number (30, 28, 20, 18) into a container, then count them again as you load them. Two good counts and you are GTG. Now use a black marker to mark the top round.

Make sure to mark the back of the round too. Now when you look at the top of a mag you can confirm it is full and GTG. And never ever rechamber a round after it has been chambered once. It may not go bang when you need it to. This time you use a black sharpie marker!

10. Black out your rear sight aperture using a black sharpie. It just cleans it up a little and makes nicks and wear less reflective.

Cost: free because you have a black sharpie marker.

11. Color your front sight. I use a bottle of glow-in-the-dark fingernail polish in orange, but you can also use model paint or a neon painter’s pen. Once you are zeroed, degrease the front sight using rubbing alcohol and carefully paint a layer on. Once it’s dry go back and repeat until you have a bright orange front sight.

At night it doesn’t do much unless you charge it with a flashlight, but daytime, along with the Askins H it makes an OUTSTANDING sight picture! 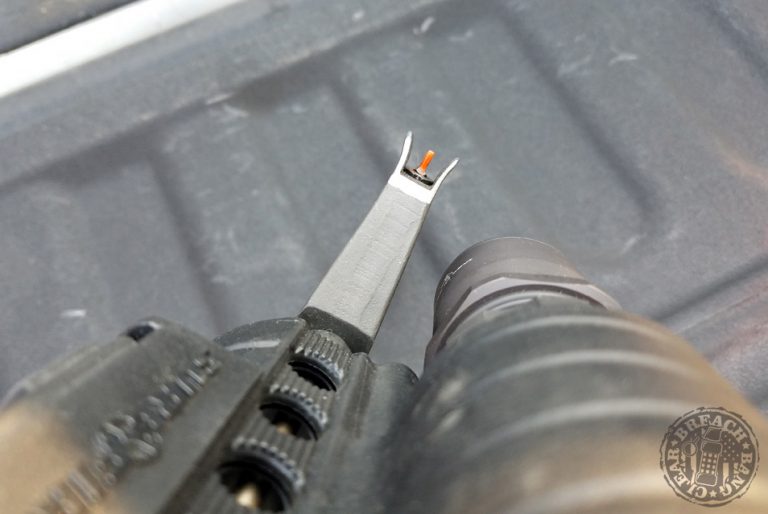 12. Mark your work number or your name on your buttstock, especially if you have an issued rifle. You take 25 guys with identical rifles, run them through the range on qualifications, and someone is going to pick up the wrong rifle. Which makes for a hell of a mess to sort out in a post-shooting investigation.

Put your name or work number on it. I use a silver Sharpie (surprise, right?). And it comes off or you can mark over it with a black marker.

So there are a few of my cheap and easy tricks. What are yours?