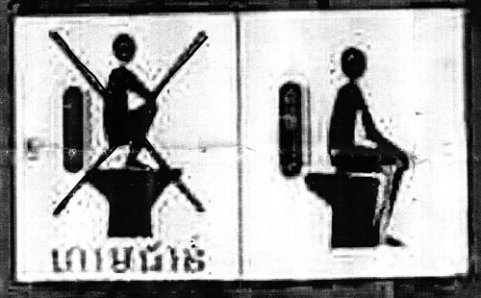 A convoy from Baghdad to Tallil…a wicked barista…IEDs and snipers and RPGs…portajohns used by foreign nationals and TCNs from across the globe. What happens when a simple soldier trying to do his job is lured by the sadistic prestidigation of a criminal mastermind into tasting The Frappucino of Mass Destruction? We’ll tell you…but it isn’t pretty.

It happened to Mad Duo Chris, and this is how it began:

No joke, there I was. . .  in the convoy yard at Camp Anaconda, Iraq, waiting to roll south through Baghdad to Tallil. The evening was nice and cool, and we had no intelligence about Improvised Explosive Devices on our route. Looked like it was going to be a quiet night.

Sounds low key enough…but it gets much worse:

I yelled at my gunner, “We’re at four, take over the count!” and sprinted to the nearest portajohn. This portajohn was for the use of the civilian truck drivers. Most of you won’t understand what that means, so I’ll explain. The civilian truck drivers were from all over the third world, and you could say they had varying standards when it came to hygiene. And varying methods of using portajohns. Many of them, instead of sitting on the john, would put one foot on either side of the hole and squat down over it. I guess their diet gave them intestinal problems, based on what they’d leave around the hole. Instead of using toilet paper, they apparently used bottled water to clean themselves. Their portajohns were always full of empty water bottles and always had crap sprayed between the muddy footprints next to the hole. And they smelled friggin’ awful.

However, this was war. Desperate times called for desperate measures. So I held my breath, ignored the disgusting conditions and did what needed to be done. Fortunately there was so much pressure, the entire process took only about 30 seconds. Relieved at the fact that the attack of the runs had hit me before we left the gate, I did a rush cleanup job, pulled my pants back up and ran to my humvee.

Read the bowel-shattering entirety of Chris’ tale of gastrointestinal torment (and the outcome of the convoy) here.