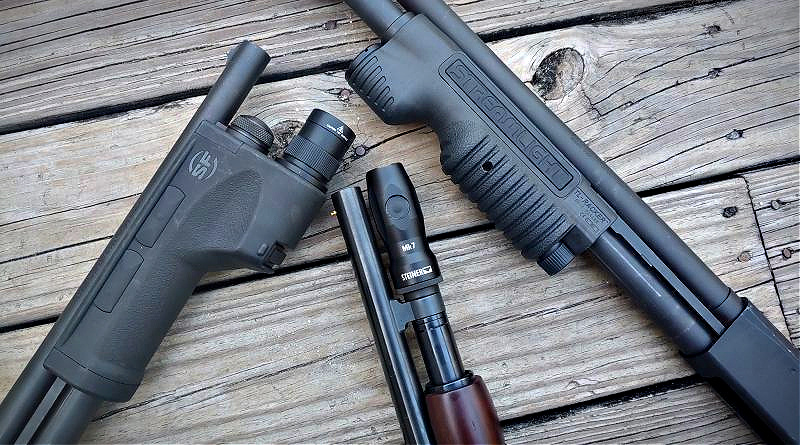 Attaching a light to a shotgun can be a little tricky, especially a pump-action shotgun. Wires, pressure switches, and other fun light stuff are tough to master on a shotgun. A better solution is a dedicated shotgun light. The good news is: they exist. They exist in a few different configurations, and we’ve gathered three from three big weapon light companies: Surefire, Streamlight, and Steiner.

The Surefire DSF is the classic dedicated shotgun weapon light. The original series came out decades again, equipped with old school 60-lumen fluorescent lights. The latest in the DSF series packs 600 lumens of light on the high mode and 200 lumens on the low mode. This shotgun light is a walloper with ambidextrous controls and a designated killswitch for travel and storage. 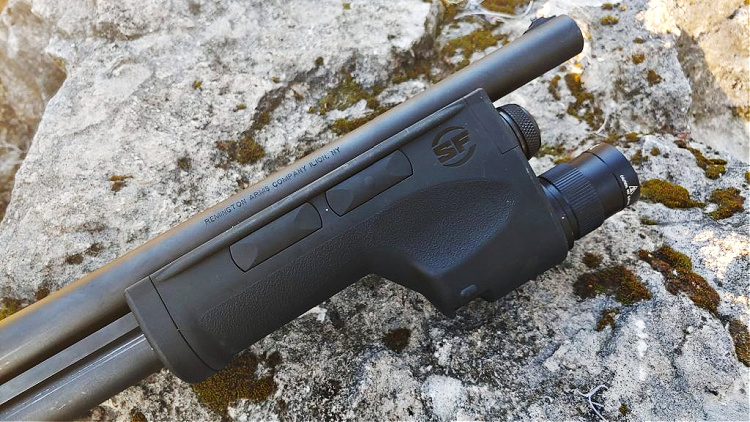 The controls are in the form of massive buttons on either side of the pump that gives you the ability to go constant or momentary and swap for high to low. The light is bright and perfect inside of shotgun ranges. The controls and integration into the pump make it extremely easy to use, even with shooting gloves. A little practice is required to learn how to properly move from mode to mode, but the big buttons are hard to miss. 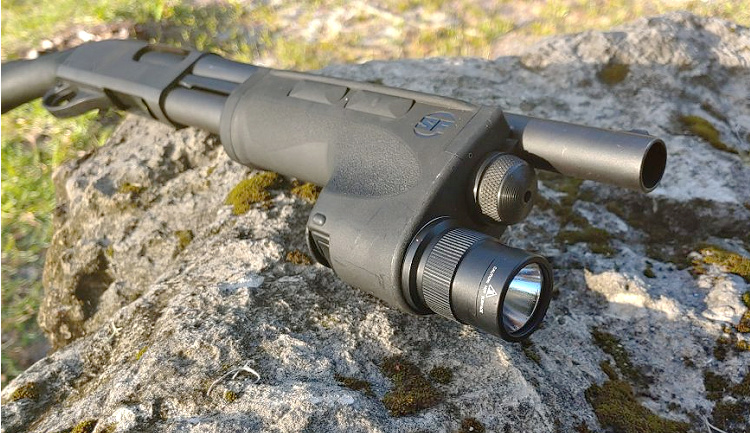 The DSF series is effective and powerful searchlights that function and integrate perfectly into your dedicated defensive shotgun. The Surefire is made to last, and like most Surefire lights, they are made to go to war and come back. The DSF series only comes for your 870 and Mossberg 500/590 series shotguns.

The Newcomer – The Streamlight TL Racker

The Streamlight TL Racker hit the streets only a couple of years ago, but it made a big swing and hit the ball out of the park. The TL Racker pumps 1000 lumens of light into an integrated shotgun weapon light. The TL Racker is made primarily from polymer, and the light is integrated well into the pump. The pump itself is textured to hell and back for an easy and sure grip. 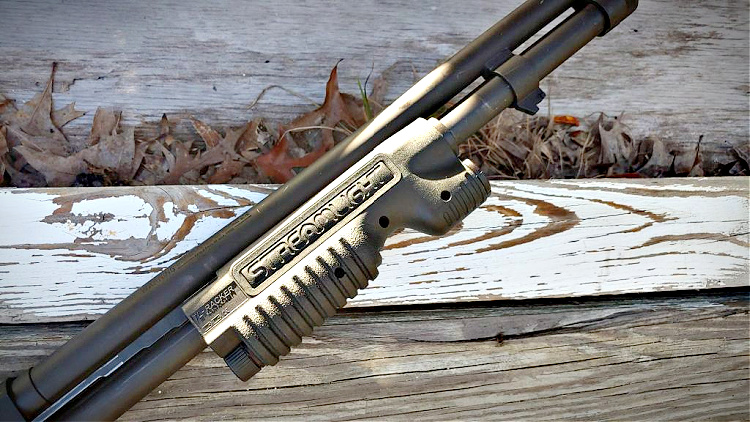 A slight dip in the pump gives you an excellent place to grip the weapon light and to run the pump in adverse situations. The controls are ambidextrous with a massive button that runs nearly the entire length of the pump. It’s massively tactile and allows you to swap between a momentary and constant mode. The bigger button is easier to use with shooting gloves on. 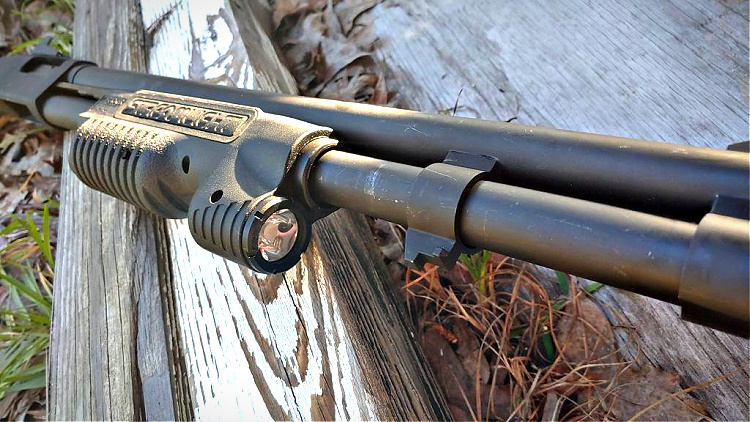 This shotgun light is a potent and powerful weapon light that is a good bit cheaper than the Surefire DSF series. At the same time, cheaper performance is never compromised. The Streamlight TL Racker is simpler with fewer buttons and modes but is still a shotgun worthy weapon light. The TL Racker is available for the Remington 870 and Mossberg 500/590, and Shockwave series.

The Gone, but Not Forgotten – Steiner Mk7

The Steiner Mk7 is a dedicated shotgun light that’s unlike the other two lights on this list. The Steiner Mk7 doesn’t replace the pump but integrates seamlessly onto your shotgun in a rather unusual way. The Mk7 replaces the cap of the magazine tube and places the light right below the barrel. The Steiner Mk7 is ultra-small and compact and weighs a mere 3.5 ounces. 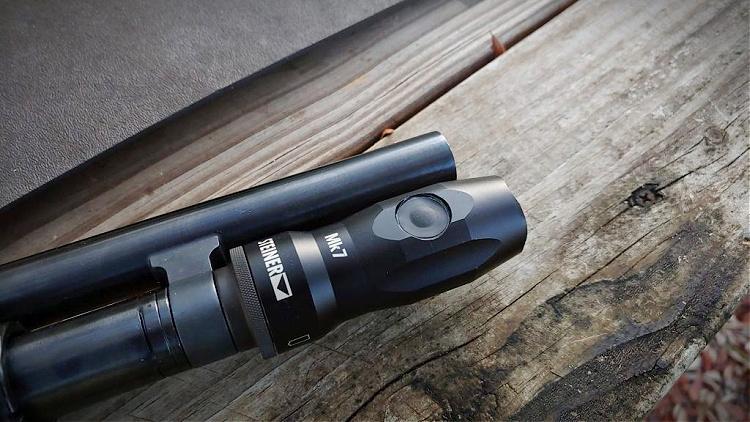 The Mk7 packs 350 lumens of white light and ambidextrous push-button controls. Attaching the light to the gun is simple, and it can keep your shotgun both ultra-small and lightweight. The Mk7 is tricky to use ergonomically, and it takes significant training to master the light and to use it on your shotgun. However, if you want to go light and short, this is the best way to do so. 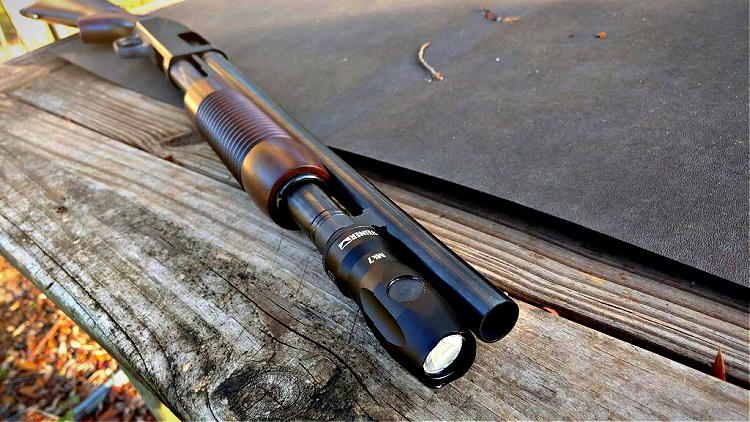 The Mk7 shotgun light can be removed from the light and utilized as a handheld light without compromising your shotgun’s function. The Mk7 keeps things very simple and is relatively affordable… when you can find it. The Mk7 has been discontinued, but they pop up from time to time and are a worthwhile investment if you want something light and short. The Mk7 is available for the 870, the 500, the 1301, and the Benelli M4.

Shotgun weapon lights are a must-have if your shotgun is a dedicated defensive tool. If you can’t establish positive identification of your target, then you can spray a load of buckshot at it. The above options are well proven dedicated shotgun lights that allow you to easily integrate a light in your dedicated defensive shotties.