You get the point. Sic ’em Pete!

There has been a fair amount of back-and-forth lately over the extended arm, c-clamp grip on ARs for shooting.  Some swear by it, others disdain it, calling it the “tactical turtle.”  On both sides, you run into people saying that either it is the only way to shoot, or that it is so wrong that it will get you killed. (grunts: curmudgeons)

The fact is, the grip does work for some people.  On a stock AR, I can’t use it, because I have long orangutan arms, and I would be holding on to the barrel with my off hand, which doesn’t work very well.  Locking out the wrist does work, with either a broomhandle or an angled foregrip (I can already hear the tactical curmudgeons grumbling about “cosmetic bullshit.”)  But I can’t lock out my elbow, being left-handed, because then I’m catching all the hot brass right out of the ejection port on the inside of my arm.

So on one hand you have the tactical fanboys, who see the latest and greatest technique and/or gear, and declare it the best thing ever, the penultimate result of fight science, and it is now the end-all and be-all.  Everything else is obsolete.  On the other you have the tactical curmudgeons, for whom anything new is just for the fanboys, and is to be dismissed as airsoft bullshit.

My point is that both points of view are wrong.  There is no end-all and be-all, no ultimate does-everything, one-size-fits-all technique or piece of kit.  Both groups are the equivalent of the SNCO or officer who mandates that everyone in his unit will have their gear set up exactly the same way, regardless of differences in size, reach, or handedness.  To them, uniformity is the great end-all, and that uniformity has to conform to their experience and prejudices. 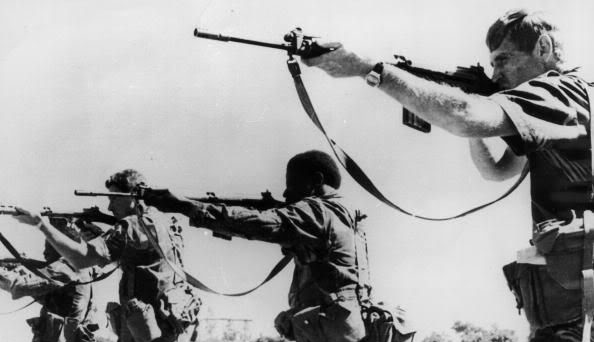 Gear and techniques are tools in a toolbox.  That’s all.  What works for one person might not work all that well for another.  My own experiences with the full-extension grip on a carbine are just one example.

Don’t be a fanboy or a curmudgeon.  If something new comes along, take a look at it; try it out on the range or in the field, and see if it works.  If it works for some situations and not for others, make a note of it, and put it in your toolbox.  If you can’t make it work at all, let it go, but understand that unless it is something patently stupid and dangerous, it might just work for someone else.  Similarly, if something new comes along, test it before raving about how awesome it is, and how it makes everything else obsolete.  Some of the old-timers could do things with a rifle that a lot of shooters these days can’t manage even with all the fancy toys.

In short, be a professional.  Look at these things rationally and practically.  When you get emotionally invested in your techniques or kit, you’re doing yourself, as well as anyone who looks to your opinion for guidance, a disservice.

Note from the Duo – if you’ve been living in a rock and aren’t sure what the C clamp grip/thumb-over-bore thing is we’re talking about, here’s a video of Kyle Lamb utilizing it. In the end your style of shooting doesn’t matter, as long as you can do it on demand (vs. on demand)….not that you don’t still have an obligation to improve. Also remember this video was obviously filmed before Kyle won the all-Viking beard speed-growing competition at Ilussat last year.