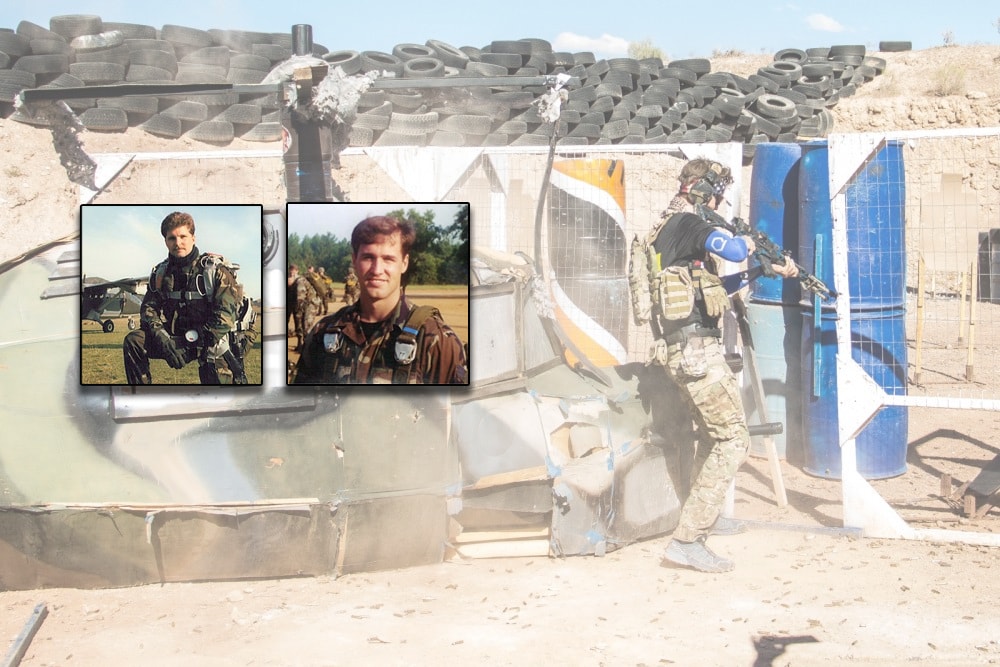 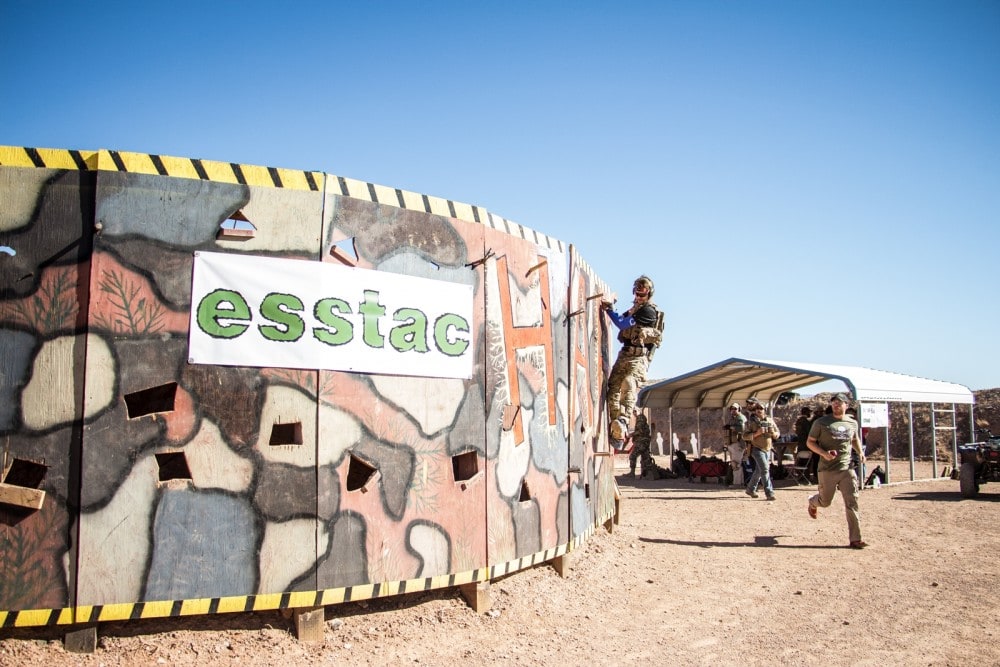 This will be the sixth in of a series of posts. In this series, we’ll be taking you through the match stage by stage with the shooter’s from KE Arms, Independence Training, and We Plead the 2nd, with video coverage from InRange TV.  IRTV’s Karl Kasarda’s usual c0-host, Ian McCollum, was out of the country during this event so KE Arm’s Marketing Director Russell Phagan (aka SinistralRifleman) stepped in to co-host these match videos.

Stage 6 was inspired by the actions of John Chapman and Jason Cunningham.  Their citations below were later upgraded to MOH. 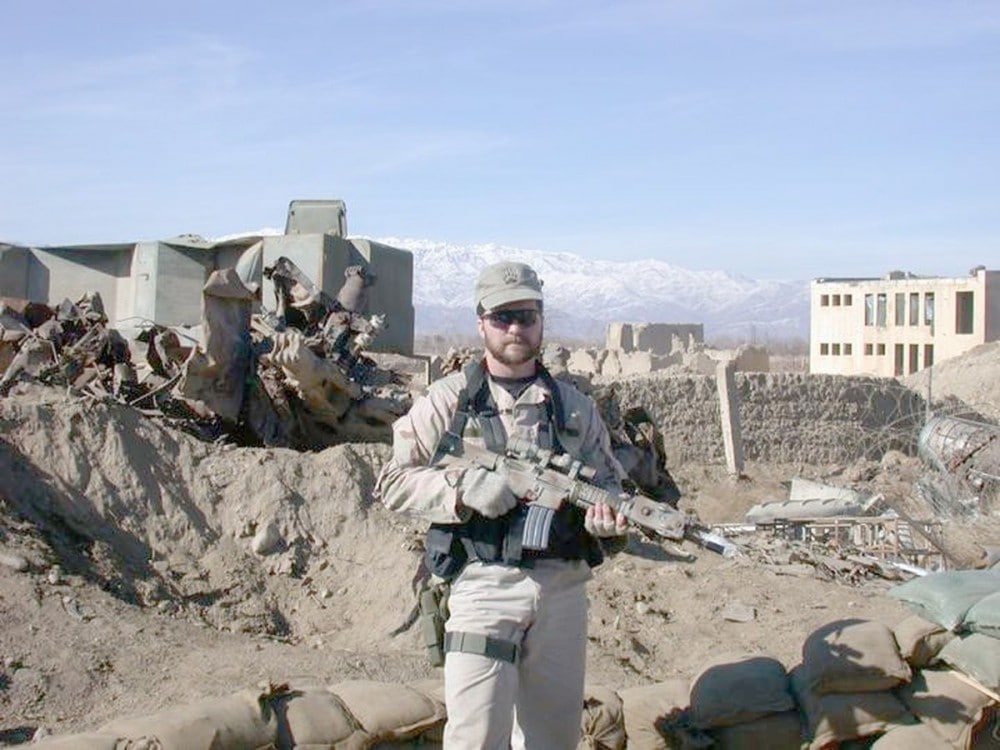 The President of the United States of America, authorized by Title 10, Section 8742, U.S.C., awards the Air Force Cross to TSgt John Chapman for extraordinary heroism in military operation against an armed enemy of the United States as a 24th Special Tactics Squadron, Combat Controller in the vicinity of Gardez, in the eastern highlands of Afghanistan, on 4 March 2002. On this date, during his helicopter insertion for a reconnaissance and time sensitive targeting close air support mission, Sergeant Chapman’s aircraft came under heavy machine gun fire and received a direct hit from a rocket propelled grenade which caused a United States Navy Sea-Air-Land team member to fall from the aircraft. Though heavily damaged, the aircraft egressed the area and made an emergency landing seven kilometers away. Once on the ground Sergeant Chapman established communication with an AC-130 gunship to insure the area was secure while providing close air support coverage for the entire team. He then directed the gunship to begin the search for the missing team member. He requested, coordinated, and controlled the helicopter that extracted the stranded team and aircrew members. These actions limited the exposure of the aircrew and team to hostile fire. Without regard for his own life, Sergeant Chapman volunteered to rescue his missing team member from an enemy stronghold. Shortly after insertion, the team made contact with the enemy. Sergeant Chapman engaged and killed two enemy personnel. He continued to advance, reaching the enemy position, then engaged a second enemy position, a dug-in machine gun nest. At this time the rescue team came under effective enemy fire from three directions. From close range he exchanged fire with the enemy from minimum personal cover until he succumbed to multiple wounds. His engagement and destruction of the first enemy position and advancement on the second position enabled his team to move to cover and break enemy contact. In his own words, his Navy sea-air-land team leader credits Sergeant Chapman unequivocally with saving the lives of the entire rescue team. Through his extraordinary heroism, superb airmanship, aggressiveness in the face of the enemy, and the dedication to the service of his country, Sergeant Chapman reflects the highest credit upon himself and the United States Air Force. 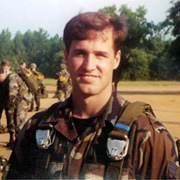 The President of the United States of America, authorized by Title 10, Section 8742, U.S.C., awards the Air Force Cross to Senior Airman Jason D. Cunningham for extraordinary heroism in military operations against an opposing armed force while serving as a pararescueman near the village of Marzak in the Paktia Province of Afghanistan on 4 March 2002. On that proud day, Airman Cunningham was the primary Air Force Combat Search and Rescue medic assigned to a Quick Reaction Force tasked to recover two American servicemen evading capture in austere terrain occupied by massed Al Qaida and Taliban forces. Shortly before landing, his MH-47E helicopter received accurate rocket-propelled grenade and small arms fire, severely disabling the aircraft and causing it to crash land. The assault force formed a hasty defense and immediately suffered three fatalities and five critical casualties. Despite effective enemy fire, and at great risk to his own life, Airman Cunningham remained in the burning fuselage of the aircraft in order to treat the wounded. As he moved his patients to a more secure location, mortar rounds began to impact within fifty feet of his position. Disregarding this extreme danger, he continued the movement and exposed himself to enemy fire on seven separate occasions. When the second casualty collection point was also compromised, in a display of uncommon valor and gallantry, Airman Cunningham braved an intense small arms and rocket-propelled grenade attack while repositioning the critically wounded to a third collection point. Even after he was mortally wounded and quickly deteriorating, he continued to direct patient movement and transferred care to another medic. In the end, his distinct efforts led to the successful delivery of ten gravely wounded Americans to life-saving medical treatment. Through his extraordinary heroism, superb airmanship, aggressiveness in the face of the enemy, and in the dedication of his service to his country, Senior Airman Cunningham reflected the highest credit upon himself and the United States Air Force. 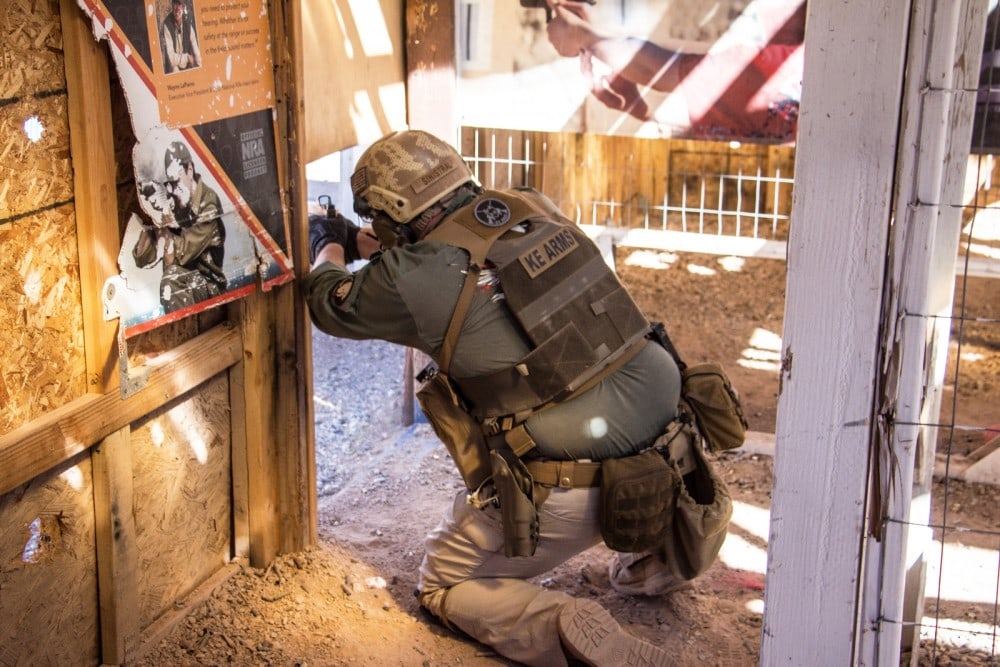 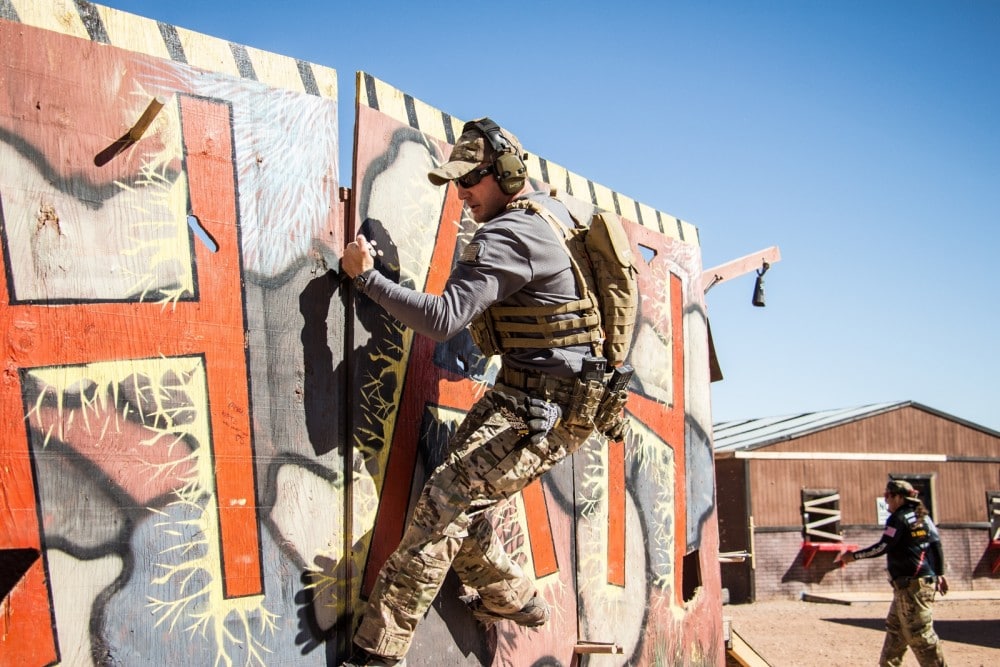 Independence Training’s Josh Reeves on the wall of doom on Stage 6 of the 2018 Hard as Hell Heroes Action Shooting Match. 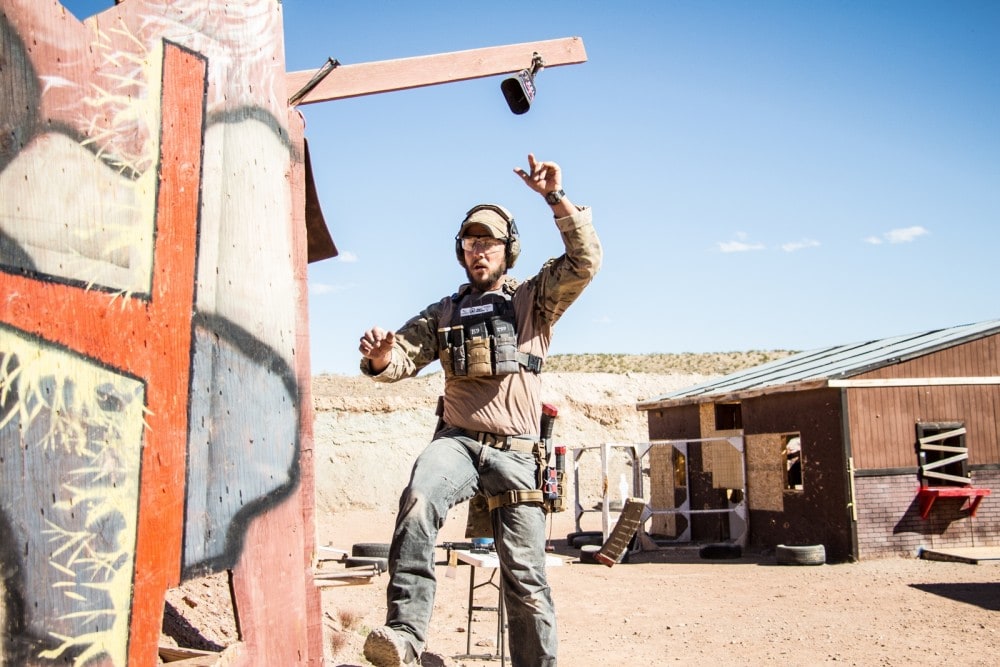 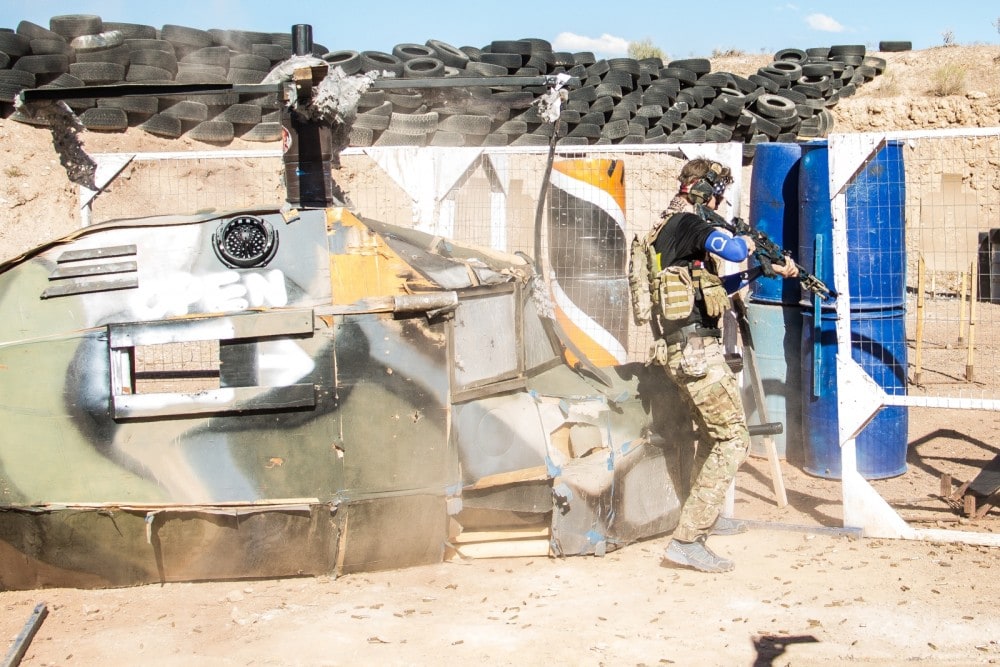 We Plead the 2nd’s Bryan Welch moves through the course with his KE-15 shooting team rifle, after moving the rescue dummy. 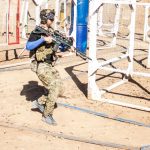 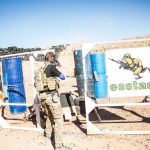 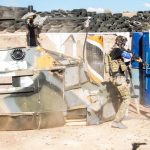 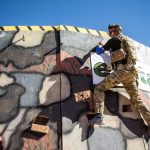 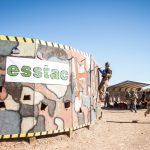 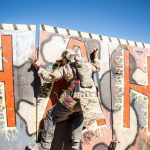 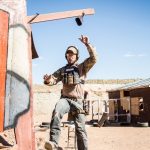 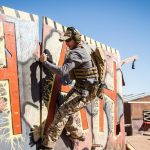 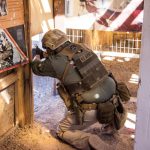