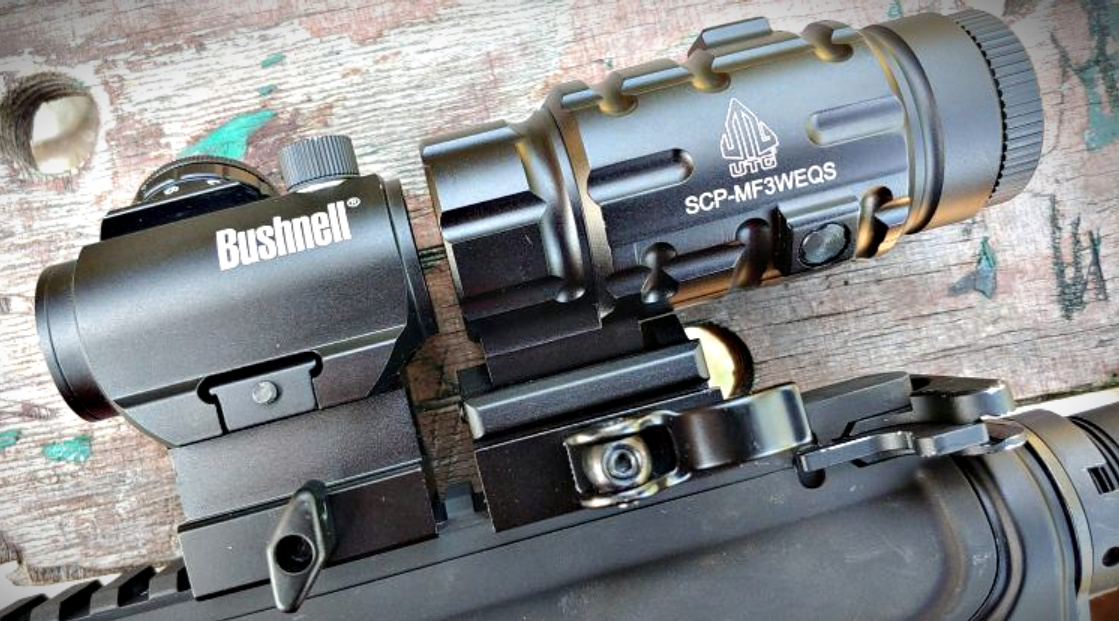 So what happens when you spend a total of $93.05 for a budget red dot and magnifier set-up? That’s what I spent via Amazon lightning and warehouse deals to ultimately see how well such a set-up would work. To be fair this is a setup that would normally cost a bit more than 100 but with smart shopping, you can out quite well. The Poor Man’s Red Dot Set-up is made up of a Bushnell TRS 25 red dot sight, a UTG Hi-Profile compact riser, and a UTG 3x magnifier flip to side with a QD mount. It’s a cheap, made-in-China type set-up.

But Does it Work?

For all intents and purposes, it does work. The red dot throws a red dot and magnifier magnifies. The high UTG riser pushes up the TRS 25 perfectly and aligns the two without issue. Everything that connects to Picatinny is tight and easy to adjust. Nothing moves, shakes, or wiggles that I can perceive. So in most objective ways, it does work.

The little 2 MOA dot of the Bushnell TRS 25 is well suited for a rifle and is small enough to be precise. The TRS 25 sports 11 rightness settings. It’s a compact red dot sight that’s likely the cheapest dot you can get that’s not a total piece of shit. This el-cheapo red dot has a good reputation in relation to its price and it’s a great hobbyist option. 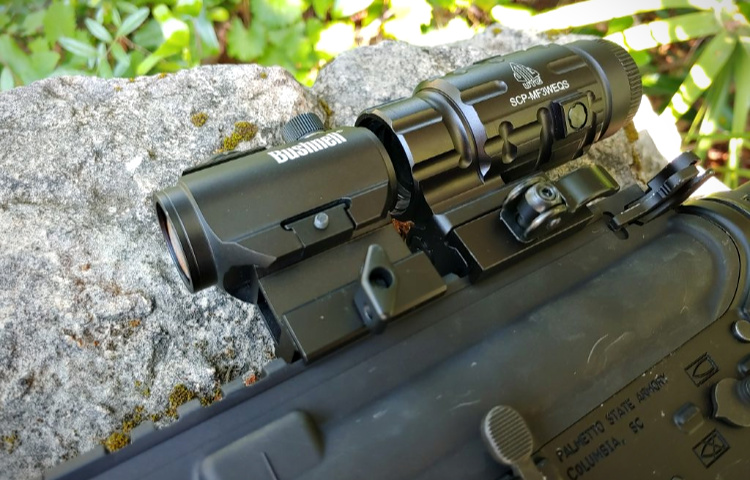 This budget red dot setup has a Bushnell TRS 25 red dot sight, a UTG Hi-Profile compact riser, and a UTG 3x magnifier flip to side with a QD mount.

By hobbyist, I mean non-professional and non-violence based use. I would use it for hunting maybe, plinking, and generally just having fun. It’s on my Colt SMG based 9mm PCC, which itself is a poor man’s rifle I built for barely anything. The Poor Man’s Red Dot Set-up doesn’t exactly allow for professional-grade optics. The clarity is okay, the tint is supposed to be expected and it’s doesn’t stop the optic from working well. It’s just annoying to have a constantly noticeable tint instead of a clear picture. The dot starbursts a bit at higher settings. The brightness settings do seem to be bright enough for any situation.

The UTG Flip to Side magnifier is not overtly terrible on the outside. The QD mount is nice and can be adjusted for different rails that are slightly out of spec. The clamp locks down very tight, which is a must-do to the flip to side design. The flip to side design works by the user pulling the magnifier back and pushing the optic to the right. It’s not terrible on the outside. It’s the inside that counts though right? 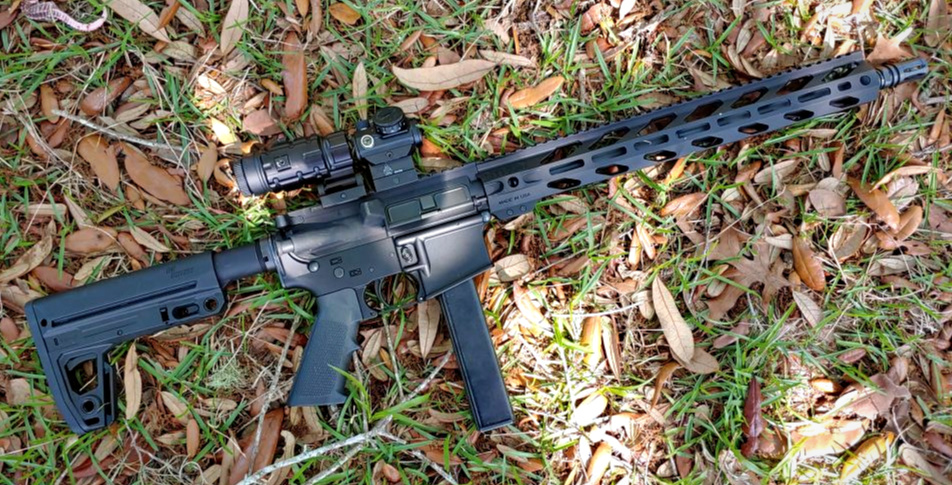 Well, the inside of the magnifier is what puts the word ‘poor’ in the Poor Man’s Red Dot Set-up. The clarity is pretty atrocious. The image looks fuzzy no matter how much I adjust the eyepiece. The whole image looks fuzzy and is just terrible. You can see your target and all, but don’t expect to do much more than that. The dot does admittedly still look sharp and is easy to see regardless of the optic’s brightness level.

Eye relief on magnifiers is never very forgiving. That seems to be universal. The eyebox on this one also sucks and your head has to be in a very specific place for it to work. If not, scope shadow quickly overrides your view.

The Poor Man’s Red Dot Set-up — On the Range

This budget red dot set-up is perfect for a 9mm rifle because I feel the fuzziness of the magnifier would make this difficult to use at 300 yards or so. Don’t get me wrong, you could hit a man-sized target, possibly even out to 500 yards, but target identification would be an issue. Is the bad guy holding a gun or a shovel? I don’t know because this UTG magnifier provides a shit image. 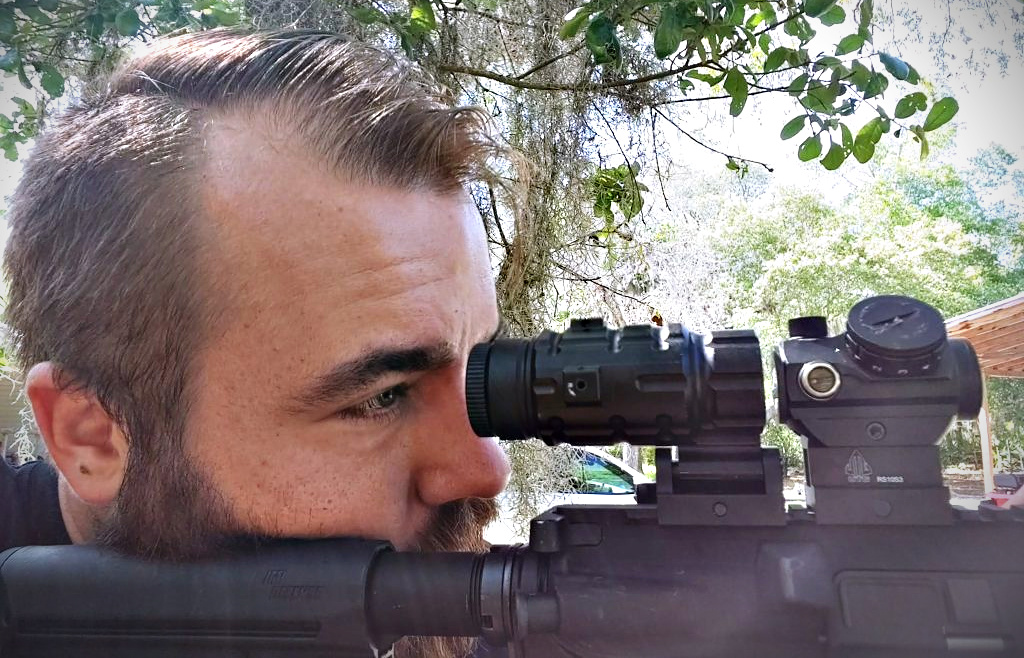 Inside of 100 yards, it’s a fun addition to my 9mm PCC. You can see and hit small targets like clay pigeons from 50 to 100 yards and it’s fun to do. The TRS 25 red dot is a better piece of gear than the UTG magnifier for sure. It works very well and does what a red dot sight should do. It holds zero, is easy to see, and doesn’t randomly shut off, so for 40-ish bucks I can accept that.

Transitioning from magnified to unmagnified and vice versa is quick and painless. The UTG magnifier flips to side and to the front without argument. Once locked in for use its stays locked in and doesn’t budge easily. The magnifier is textured like a pineapple grenade so when you grab it you do get a good grip for manipulation. 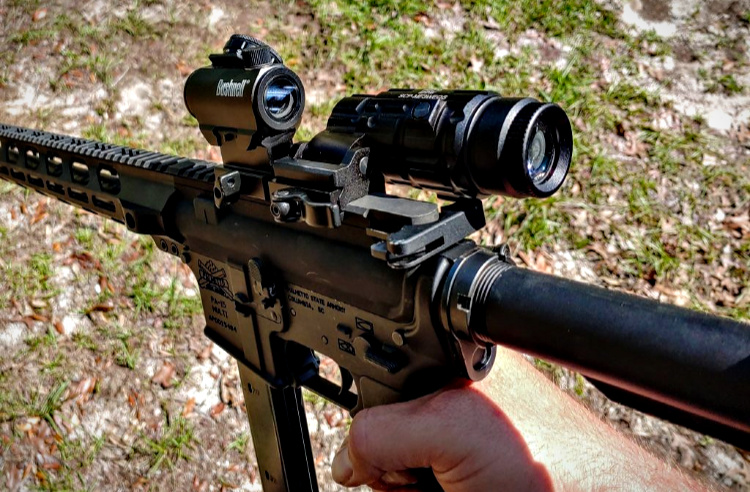 The UTG magnifier flips to side and to the front without argument.

The Poor Man’s Red Dot Set-up isn’t something I’d want for the boogaloo — but for plinking, it works out okay. It’s not perfect, and its nowhere near as clear as an EOTech and G33 setup, but for 93 bucks I think my expectations and my results were in line.