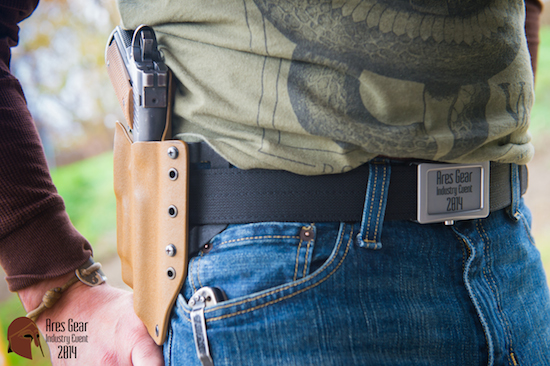 We don’t think that either name mentioned in the title needs much of an introduction, but both deserve more than we can write.  If you haven’t heard of them, take the lollipop out of your mouth and get your learning on.  Best belts in the industry combined with the legend himself? Well yeah, no shit–we’re on it like a hobo on a ham sandwich. Mad Duo 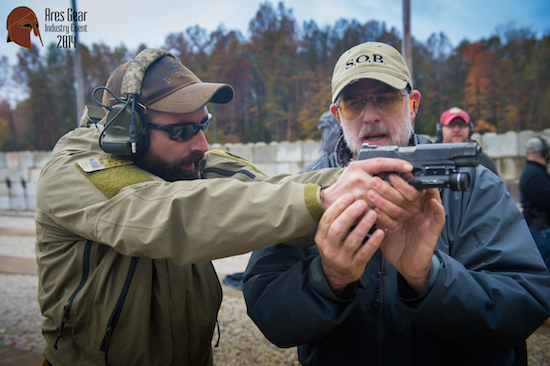 We recently received an invitation to spend a week on the range with Ares Gear and the Sheriff of Baghdad himself, John McPhee. As fans of both, We looked forward to receiving some top-notch instruction while having the chance to talk and catch up on some exciting projects in the works. We found ourselves stuffing gear, guns, and ammo into our dead hooker bags before heading to Ohio for the “Ares Gear Industry Event 2014”.

This year Ares Gear LLC chose John Mcphee of SOB Tactical to headline the event, and provide all of the instruction for both live fire and UTM training. The owner of Ares Gear, Jake Sebens is as much of a shooter as he is a businessman. It is his active engagement in different shooting disciplines, and his quest to build superior products that directly result in Ares Gear being the pick of armed professionals the nation over. Considering how many trainers, cops and uniformed servicemen choose Ares Gear over the competition, it’s no surprise that Jake hired John Mcphee to take the helm for this annual event. 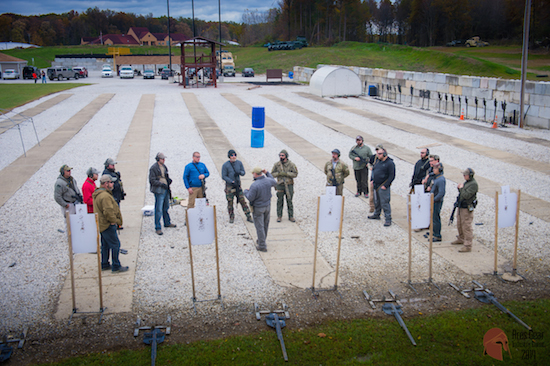 Aside from hanging out and burning powder with friends, we were most excited to meet and train with John McPhee. John spent over 20 years in the Army, serving his time in Special Operations. A Ranger, Green Beret and member of The Unit, John is a “been there done” that kind of guy, but with a great sense of humility and humor. After leaving the service in 2011, he formed Sheriff Of Baghdad, a premier firearms training company. Shrek (as John is called by teammates and friends) has earned Subject Matter Expert status on damn near every type of modern weapon, and has the skill, experience and knowledge to instruct anyone willing to learn. He has gained notoriety in recent years with his “Gunfighter University” service online, where students can film and send in videos of themselves shooting for Shrek’s critique. This is a great avenue for him to reach students that cannot make it to the range, or afford the opportunity to train directly with him. 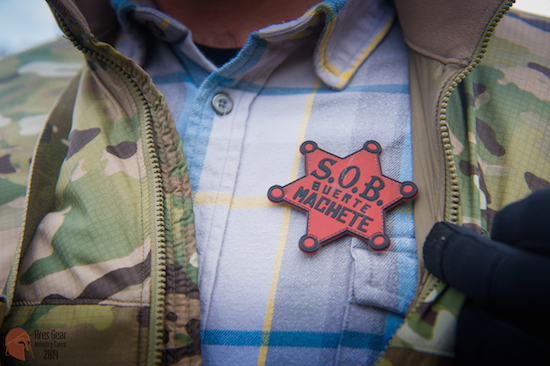 Luckily we had the opportunity to experience this in person, and see the magic behind Shrek’s unique approach to refining shooting skills. He uses a program called Coach’s Eye to great effect, which allows him to film the student in slow motion and then show the student what he or she is doing correct, as well as what needs to change. Stepping out onto the Alliance, Ohio Police range, we kicked off day one with pistol. Each student shot individually, one at a time under Shrek’s watchful eye and iPad. After the shooter finished the string, we would all gather round to watch as Shrek did a play-by-play of stance, grip, recoil management and other key factors. He encouraged us to watch each other while shooting, and watch the videos to learn how to identify issues affecting many students.

While waiting our turn, we chatted with other attendees which included old friends and new acquaintances. There were handpicked shooters from several different law enforcement agencies, as well as vendors such as Tactical Distributors, Uber group, OP Tactical, F3 Tactical, And Victory First! With such a wide range of shooters of different backgrounds, we were intrigued to see how Sheriff of Baghdad’s instruction would transfer to the group. “The camera doesn’t lie,” Shrek said with a smile, and that proved to be true for everyone. Our own perception of firing a weapon is often different mentally then what actually happens. By using the Coach’s Eye program, there was no denying anticipation, poor stance, or over muscling the gun. For many, (ourselves included) this was a sort of “eureka” moment, getting to see what they have been doing wrong. 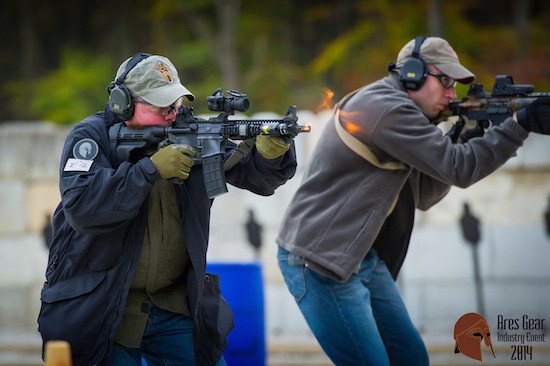 Day 2 was once again spent on the range, filming each shooter only now with carbines. We had the chance to work our issues out, and talk with Shrek individually about tweaking our technique. With catered lunch provided by Ares Gear, we had the opportunity to maximize the training time and stay on site for the duration of the course. Day three is where everything came together, shooting pistol and rifle out to 100 yards and learning new drills that Shrek uses personally to keep his skill set razor sharp. Success was rewarded with SOB patches, and failure was answered with Shrek’s humorous, good-natured berating fitting of his years of service. 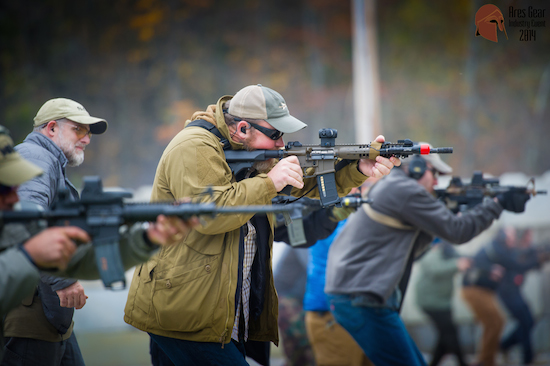 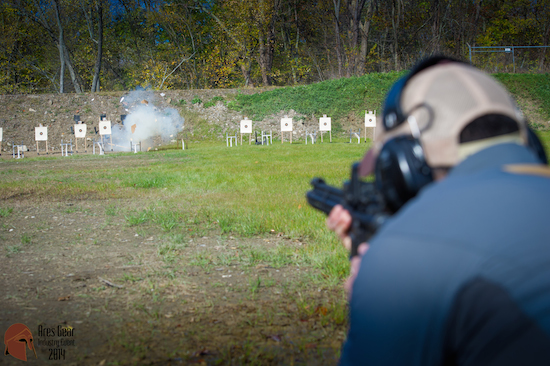 Ares Gear had recently purchased some AR-15 and Glock UTM training kits, and by far this was the part of the event everyone was most looking forward to. Alliance has one nice shooting setup, with their shoot house being the crown jewel. This is where we would use the UTMs, installed on our personal guns. Operationally, there are few men alive that have spent as many hours doing CQB as John McPhee. The chance to receive this sort of instruction is rare enough, let alone from a member of our country’s most elite and secretive hostage rescue unit. We believe that pain is a universal teacher, and using sims or UTMs is one of the best ways to vet yourself prior to a real life event. Like most of Shrek’s instruction, clearing structures is straight to the point, and easy to understand. After dry runs of various size, we proceeded to clear the shoot house of UTM armed threats. Working as two man and larger teams, Shrek’s instruction on this subject was the most logical and effective means we have ever learned. It undoubtably has a lot to do with his own survival and success in combat. 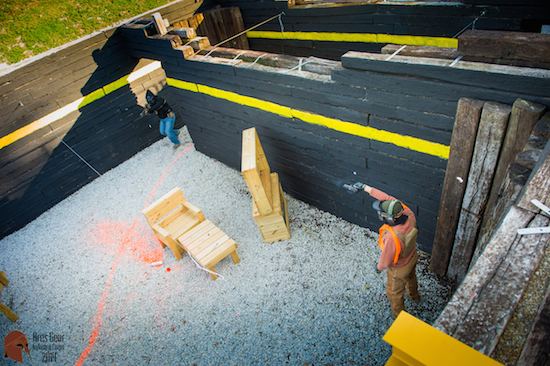 Ares Gear hosted this event in the belief that when great people in the industry come together, great things always result. We had an absolute blast at this year’s event, and learned too many things to even try to list. John McPhee is an absolute pillar of professional instruction, and an asset you are foolish not to seek out. We can’t recommend his guidance and approach to training highly enough. It was great to catch up and discuss some exciting new projects in the works, and see how Ares Gear has been progressing as a company. With strategic partnerships, increased production and a never quit attitude, Ares Gear has set itself apart from the pack and continues to push quality over quantity. 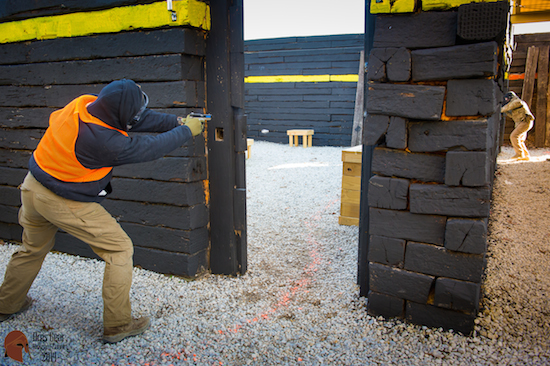 We want to thank Jake and his crew for throwing a world class event, that all who attended will surely remember for years to come. We are never surprised to see this company redefine the standard, and push hard to bring their products to market. Its going to be hard for the company to outdo this event next year, but we are sure they already have begun to plan! 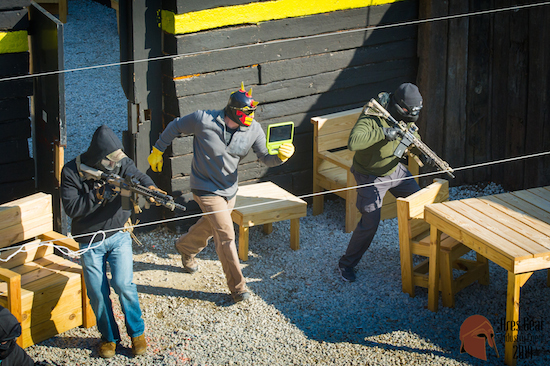 Tactical belts – looking for a recommendation? Parse through all the articles.

You’ll be supporting the site if you do it with one of our links. 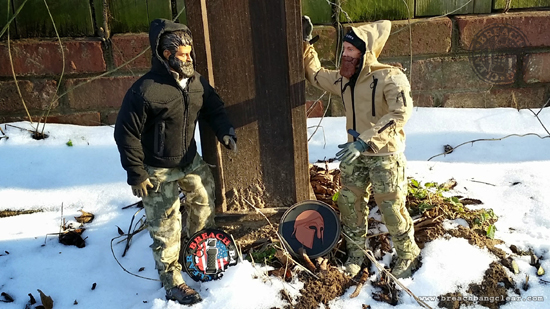 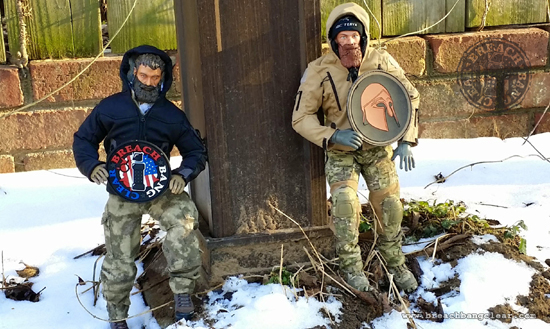 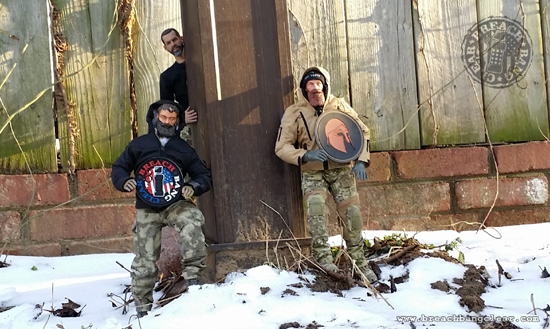 Life is all tracking 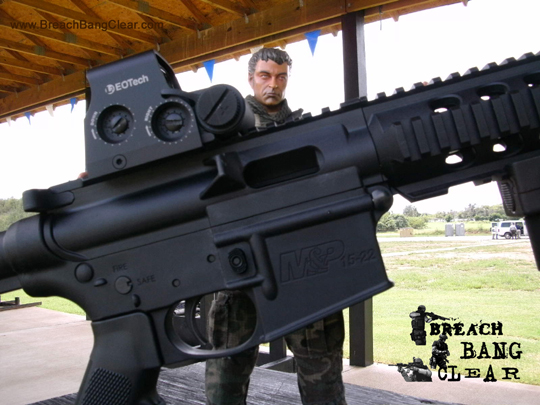