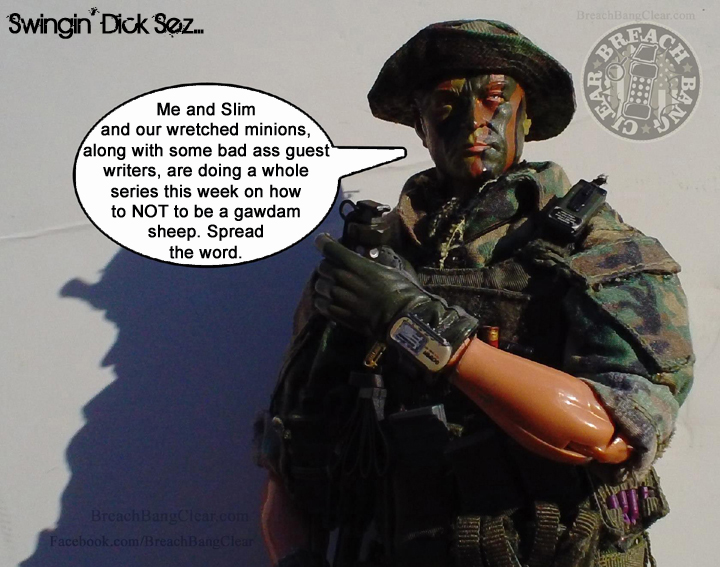 We’re running this again because it fits right into this week’s theme about EDR, EDC, SA and mindset. Mindset is more than than the memorization of some acronyms (though we do love us some acronyms), handy phrases like Sheep Dog and color codes. There, we said it. Acroynums (OODA anyone?), terminology (wolf-hunter!) and color codes (I’m only in Condition White when I’m anesthetized at the hospital!) are great, but there is more to it than that. Breach-Bang-COWAN! is going to explain that to you. Read on and remember – a warrior ethos is something every citizen can have.  Mad Duo

When I worked as a police officer for the Department of Defense, I had the opportunity to hold (among other) collateral duties, the position of in-service training officer.  Now, the department was small by most standards; 32-38 sworn officers at any one time and an admin staff that could fill a mini-van comfortably with plenty of room for hitchikers left over.  However our chief was very pro training. In fact he was so pro training that my position was full time. I was granted “cool guy” status and allowed to wear a polo and the coveted tan 5.11 pants to work as opposed to dress blues or blue utilities.   My chain of command would almost fit in a Smart Car; me, Lieutenant and Chief.  Carte blanche (grunts: carte blanche) was more or less bestowed upon me. I was to take a reasonable group of officers and mold them into studs of the highest order, men and women who would embody the ideal police officer.  My approach was simple; train each officer to be constitutionally knowledgeable and effectively lethal behind a firearm (of course we shoot to incapacitate, not kill).  There are other skills that make up an officer; report writing, driving, communication, and so on, but I didn’t have to personally concern myself with those as I had other officers who could fill up classes with that content. All I had to do was schedule them time and I did.

My largest concern was mindset.

I knew that I could not train a person who did not want to be trained and I can’t help those who don’t want to be helped.  This wasn’t an issue for my “clique” on the Special Response Team; we were all prima donnas who got the coolest gear, sweet tactical watches and more issued SWAT crap than any of us wanted to have, let alone wear.  For the rank and file officer, I had a problem that required a unique approach.

See, I believe there are three kinds of cops; Those who love it and would do it for free if they could; those who just needed a paycheck but will do the job; and those who have no business wearing the badge.

See, I believe there are three kinds of cops; Those who love it and would do it for free if they could; those who just needed a paycheck but will do the job; and those who have no business wearing the badge.  I had all three types and wanted them all to perform to the same level.  Contrary to what some of my SRT guys (and some SWAT cops in general believe), the patrol officer has a higher need for critical skills training than the guys in the cool truck with matching balaclavas.

The average SWAT team can pull the average drunk out of the average trailer.  They volunteer to do so and often train to excellence under their own motivation and sometimes on their own dime.  However it’s the patrol officer who often makes first contact with the bad guy, be it traffic stop, domestic dispute or the ambiguous “man with a gun” call.  As much as I was a high-speed SRT guy, I considered myself a patrolmen first.  I do not mean to take anything away from the skill or motivation of tactical officers, because they are a necessary part of a department and have the most dangerous volunteer additional duty, but by and far they are not the ones getting into gunfights.  SWAT cops have a tactical mindset so to speak, whereas the line officer may not.  Mindset is the key to training and the type of mindset the officer had to begin with (see my simplified three types of cops) largely decided my approach to teaching them the most important aspect of gunfighting.

Now, his isn’t about cops. It’s about mindset in general no matter your profession. However I’m writing from my experience training cops  because it was there that I learned how to help an individual develop the mindset that made them want to fight if they had to.  Firearms are for self-defense first, hunting and sport come after that.   The basic mindset, down to its very core must center on this.  Sport shooting is a luxury, and hunting (in today’s world) is as well.   Self-defense is a necessity, never made more plainly clear than when we hear the countless stories of people injured or killed because they didn’t take the time to train and they didn’t train because they did not believe it would ever happen to them.  Of course bad luck plays a part in some of these stories, but I know you readers will quickly think of more than one news article that painted (in tragic colors) the case of someone who did not take personal responsibility for their own life and then lost it as a result.   Gun ownership for self-defense means accepting the responsibility for your life and possibly the lives of others; it is the possession of a tool to solve a problem, but the ability to solve that problem is not inherited when you pick up your weapon.  No amount of posturing or hyperbole is going to change this fact.  Just as gun ownership in and of itself does not give someone the motivation to act when action is needed.

Gun ownership for self-defense means accepting the responsibility for your life and possibly the lives of others; it is the possession of a tool to solve a problem, but the ability to solve that problem is not inherited when you pick up your weapon.

You have to want to stop the bad guy.  In essence, this is the universal truth of a warrior’s mindset.  No matter the moniker you use, Wolf Hunter, Warrior, Gunfighter, Sheep Dog; the feeling is the same.  The hyperbole has the risk of being the same as well, saying you will does not mean you will.  Of all the cops under me, I had two who, of their own admission, would not use their weapon to stop a violent threat.  This was a serious problem for me.  How could I possibly convince an individual with a personal objection to violence, to be violent if the time came?  Be it a psychological or moral objection, the truth is that these men are not exceptions.  There are a large number of people in the world who would never use violence to defend themselves, or never take the time to prepare to do so.  Then there are those who fancy themselves as hard individuals but do not exhibit any of the traits associated with someone who has put in the work to wear that title.  Militaries throughout history have used a combination of physical and mental (operant) conditioning to prepare soldiers for bat

tle.  Drill, morale, punishment and reward, desensitization and stress inoculation, among other techniques, have been and continue to be used to prepare the mind and body for confronting combat and many of these techniques have been imparted upon the law enforcement community to prepare officers for the same.  Make no mistake, as far as survival instinct and the body’s response to stress is concerned, there is no difference between a parking lot shooting in St. Louis and an alleyway firefight in Mosul.  Tools are different, the reason for being there is different and perhaps even expectation prior to the actual fight is different, but the nervous systems responses are the same.

No matter the moniker you use, Wolf Hunter, Warrior, Gunfighter, Sheep Dog; the feeling is the same.  The hyperbole has the risk of being the same as well, saying you will does not mean you will.

In each person there is a reason, even with my two cops, that will motivate a peaceful person to violence when it is needed.  For my two cops, both of them admitted that they would use force to defend their families, which is admirable and a trait I think every reader can agree with.  But that creates a conundrum; they were willing to use force to defend the lives of their family, but not themselves or a third party?  It didn’t make sense to me then and it still doesn’t.  It can be argued that we all have a self-destruct ability built into us that cannot be reasoned with if the conditions are right, perhaps that’s the case with people such as them.   So I was left to train two men (among other officers) to have a mindset that neither appeared to have the will or capacity to accept.  I was going to try and sharpen a knife that could not, would not cut.  With a level of frustration high enough to aggravate a mannequin, I actually lost quite a bit of sleep trying to find a way to reach them.  The simplest solution would have been to have them terminated.  Of course it’s not that easy.  Both men willingly admitted that they were looking for other work but until then, it was my job to show them the light if I could.  What started as extreme frustration eventually lead me to a cathartic discovery in the most unlikely of places that has shaped the way I teach, explain, live, eat and breathe mindset ever since.   See, I am a devout believer in Colonel John Boyds OODA (Observe, Orient, Decide, Act) loop, the series of time competitive cycles our brain goes through in order to act.  Reading into Boyd I happened upon a Doctor David Eagleman, a neuroscientist appointed to the Departments of Neuroscience and Psychiatry at Baylor College of Medicine in Houston, Texas.  Dr. Eagleman has done for the concept of OODA what NASA did for space travel.  His research has opened up new windows of understanding and new methods of training for the use of judicious violence and the reactions to violence (specifically in the areas of time perception and reaction) even though he may have not intended for his product (research) to be used in such a way.

But Dr. Eagleman isn’t my point. I only mention him specifically to encourage you to check him out, and seconearily to make the connection to Claude Shannon. Claude Shannon is the progenitor of Shannon’s Information Theory (grunts: progenitor). That is how I address sharpening knives that would not, could not cut. Come back tomorrow for Part 2 and learn more about how I tried to enable the epiphany of responsible power. 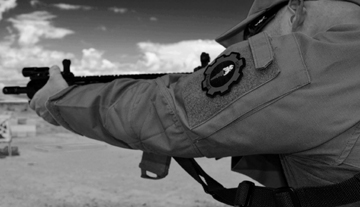 Check out Sage Dynamics whe you have time, or pick up a copy of COWAN!’s training DVD.