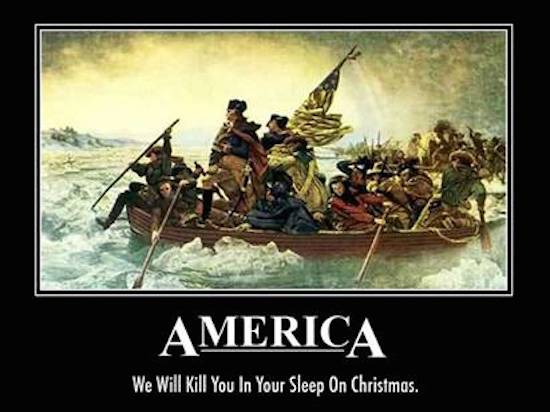 You may have seen this meme before (if you haven’t, it’s posted below) but there’s an actual story behind it. For this Independence Week twofer, find out the background below.

If you like guns, love America and have an internet connection, you have likely seen this meme before. It’s a good one, we willingly admit that. In fact, we here at Breach Bang Clear would go so far as to say it’s one of our all-time favorite ‘Merica pictures. But very few know the story behind this slice of internet absurdity, so we fingered what better week to tell it to you, than this week of independence?

First off, this epic image is from the famous painting, “Washington Crossing the Delaware”.  It was painted in 1851 by the German-American artist Emanuel Gottlieb Leutze. It famously commemorates our original all-American badass General George Washington’s crossing of the Delaware River on the night of December 25–26, 1776, during the American Revolutionary War.

So what’s so special about the night of December 25-26th 1776? It was Christmas, and there were some assholes that we needed dead in the town of Trenton, New Jersey.

As you should know from history class, or the very least by reading our articles this week, the American revolution was an all-or-nothing war to win independence from the British empire. We were sick of their shit, their terrible breakfast choices and subpar dentistry, and finally decided it was time we start our own nation. George Washington was the supreme commander of all continental forces, or simply the HMFIC of our future. The war was not going in our favor, and it was still close to the beginning. If the colonists hadn’t started winning some battles, you’d be drinking earl grey tea as you read this instead of coffee. So what was going on in the mid-east coast AO that cold Christmas? Well, here it is, as told by us. The Mad Duo.

The punk-ass redcoats didn’t have enough resources to fight, so they hired out some German mercenaries, called the Hessians. These kraut bastards were sort of like the 18th-century version of Blackwater, only they were owned by the German state of Hesse. Anyway, the Hessians made up about a quarter of enemy forces we fought during the war, and they had some bad mamma-jammas in their ranks. They were pretty quick to pop their deserters and were known for being skilled in numerous forms of combat. A detachment of about 1,500 Hessians had holed up for the holiday in and around Trenton and was expected to drop their guard for the birth of baby Jesus. Assuming we were too “civil” to attack on the holiday, they went into chill mode. Bad weather kept them from posting much of a fire watch, and their CO was a self-serving dick. Their commander, Colonel Johann Rall, was said to avoid hard work and had little concern for his troops’ comfort. As such, the Hessians were all like “Fuck that douche, let’s drink some lager and maybe run a train on a few of these colonial bitches.” So they settled in and prayed to Krampus or whatever, KNOWING there was no way we would attack. Wrong again motherfuckers!

George Washington called his officers together to break his plan down barney-style. GW was all like “Check it out bros, this is how this shit is going down.” His eagle eyes caught a dude falling asleep in the back of the tent as he explained his plan, so he called that fucker out, and made him stand, sipping water from a wood canteen as he continued. “Shit, where was I… all right, check this trash out gents…” GW explained that he had some secret squirrels across the river, giving him solid eyes-on reports of the Hessians. The plan was to launch a coordinated, three-pronged attack into New Jersey and kill or capture everything around Trenton. His boy General Cadwalader would launch a diversionary attack against the British garrison at Bordentown, NJ, and cut off any reinforcements from the south. General James “Go Easy” Ewing would take his 700 militiamen across the river at Trenton Ferry, and seize the bridge over the Assunpink Creek. This would prevent enemy troops from escaping. GW would take the mother-fucking-point, (like he always did, bro) and lead the main assault force of 2,400 men to soon-to-be-renamed-Murderville, AKA Trenton. They would cross the frozen-ass Delaware river 14 klicks north, push south and split into two groups to launch a pre-dawn attack. Depending on how bad they fucked the Brits and Huns up, the Americans would possibly follow up with separate attacks on Princeton and New Brunswick.

GW finished his Frago, only to notice that the dude that fell asleep earlier didn’t have his note-taking gear out. He drew his 1911 .45 and smoked-checked the butter bar on the spot. “Get some E-3’s in here to clean this shit up,” he growled angrily as he left the tent. Emotions were running high, and the officers still inside the tent listened to him yell at a passing Sergeant for having his hands in his pockets. A particular Sergeant Major (well known for being a suck-dick) pushed past them to get in on the ass-chewing. Having been issued literally no gear from the continental army at all, not even gloves or a uniform, was no excuse as the sergeant was informed before being NJP’d. Three other soldiers were reprimanded that day for riding horses over 5 MPH in the FOB.

Christmas came, and the troops all sat around smoking on their gear as they waited to move closer to the Delaware River. They hoped for Hot-Wets to chase the cold away but were informed that chow was a crutch, even on Christmas. The night of the raid was equally jacked up. We are talking football bat, soup sandwich, goat-rope levels here. There was delay after delay, and it forced the plan off schedule. Because the colonial pipe hitters all had three days worth of chow, and plenty of ammo for the mission, supply had to weigh them and their gear for the boat manifest. This took several hours because no one could find any of the supply guys or the quartermaster. When they finally showed up, they claimed to have been taking inventory at a local barn, but everyone knew they were totally sleeping in the stables.

Finally, they moved to the river.  The ammo tech asked GW if need needed any more balls or gunpowder, and he replied by grabbing his crotch and proclaiming “All I need are these two, son!” All of his troops let out a nervous pre-combat laugh.  No shit and you can look this up for real, the challenge and password for the attack were “Victory or Death”! How badass is that?

Assembled at the river’s edge, GW was getting impatient and asked why his soldiers had not loaded up on the Zodiacs yet. A nervous officer told him that supply had accidentally left the boats in CONEX cans, back at the FOB. “Fuck my life,” he whispered in response, to no one in particular. They used Durham boats instead, while the horses and artillery went across on large ferries the troops had ganked. The trip would prove to be difficult in the darkness of the night, as supply had run out of candles for everyone’s lanterns. The Staff NCOs yelled at the troops for using their candles to walk around camp at night, and for wasting them to write letters home. Everyone was pissed and just wanted to go kill some Hessians.

Terrible weather conditions further delayed the landings, as did the discovery that no one brought their glow belts along for the crossing. It was clearly on the gear list, but some dudes thought that PPE was a joke. George Washington promised they would pay later, and that he would maybe even pull the 96-hour pass he promised them upon victory. The movement was supposed to be completed by 12:00 am, but it was 0300 by the time they got everyone across the icy water.

Stay tuned until tomorrow for Part 2. 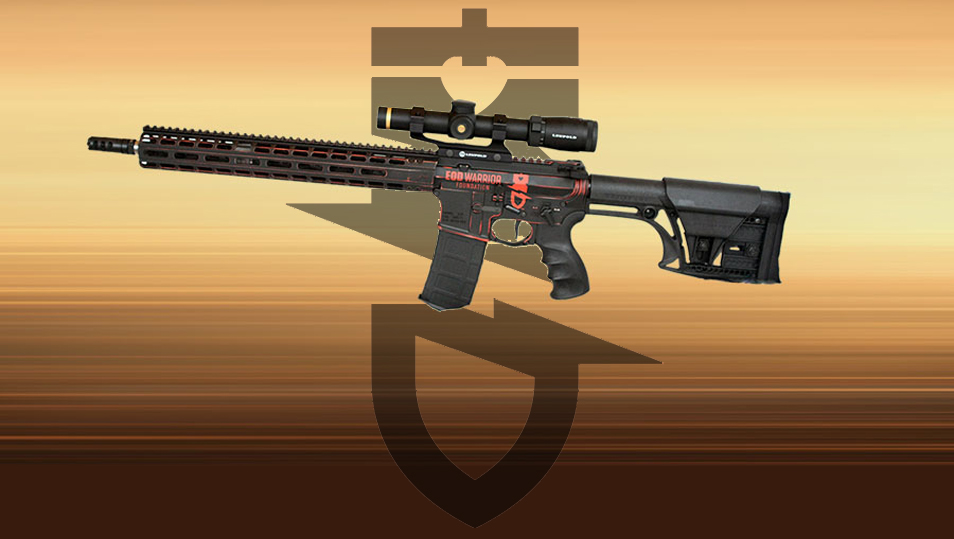 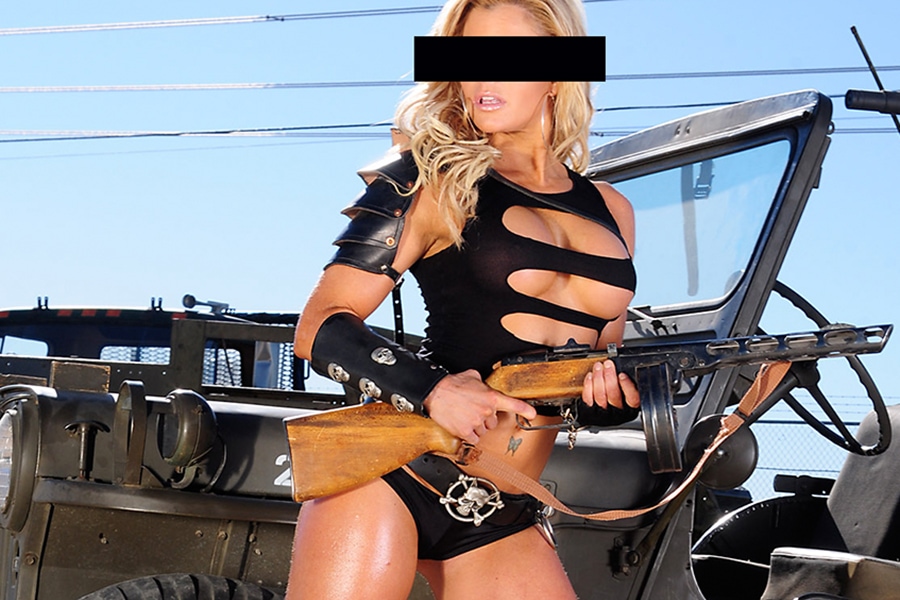 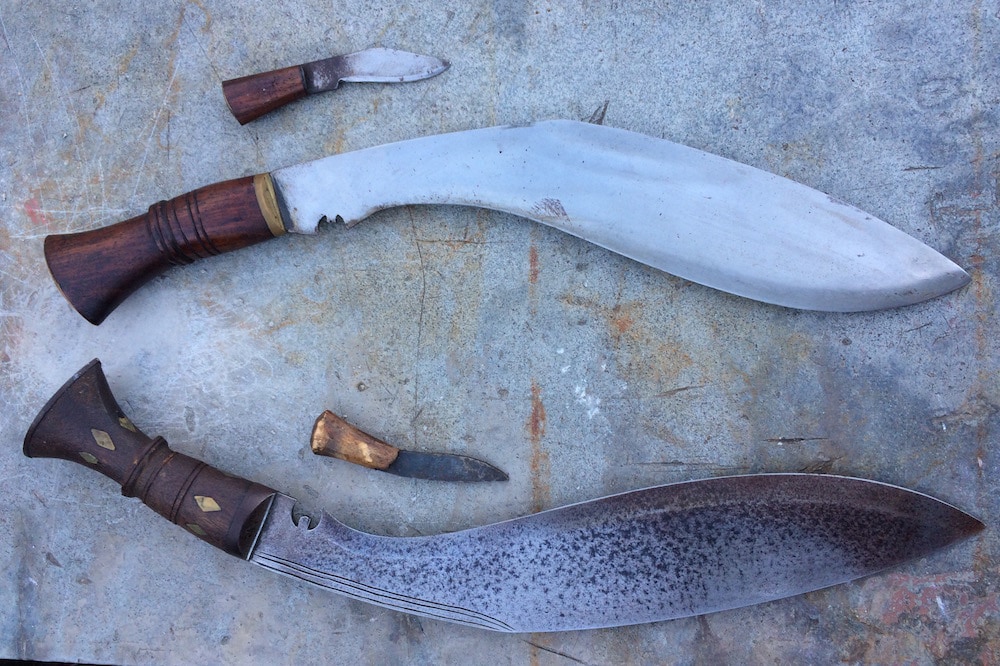 9 thoughts on “Independence Week | We Will Kill You in your Sleep on Christmas. Part 1”