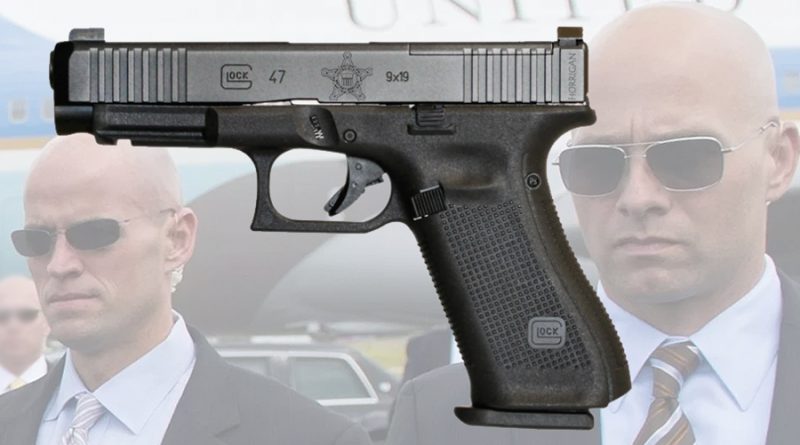 News of the Glock 47 and the CBP contract it served became available in early April, 2019. Interest in the weapon continues both among LE agencies and the public at large. We’ll provide occasional updates on the Glock G47 as they become available (and if they’re interesting).

Glock 47 | now to be issued to Secret Service SOD

Glock 47 | Specs and more about it 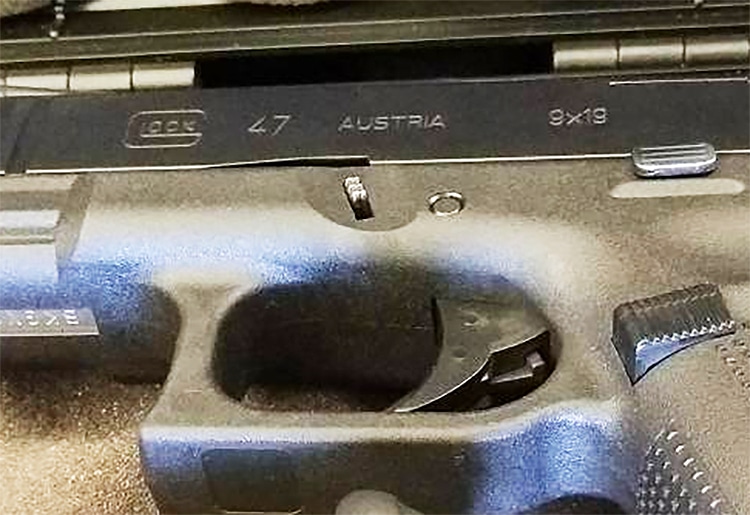 Officially the RFI calls for a “Service Handgun Electronic Aiming Device.” That is, they’re looking to upgrade the G47 and G19 with mini red dot sights. The slides on both pistols are Modular Optic System (MOS) cut.

According to the RFI:

U.S. Customs and Border Protection (CBP) recently awarded a contract to GLOCK, Inc. to provide the next generation of handguns for CBP and other U.S. Department of Homeland Security (DHS) law enforcement agents and officers. The GLOCK model G47 and G19 handguns being procured are considered “optics ready” utilizing the GLOCK Modular Optic System (MOS). CBP has a strong interest in identifying optics compatible with these handguns which are suitable for duty use in the environments and conditions encountered by CBP agents and officers. Based on responses received during this Request for Information (RFI), CBP may solicit for an Indefinite Delivery / Indefinite Quantity (IDIQ) contract to provide optics for issued handguns.

Devices worthy of consideration should be specifically designed to mount securely to G47 and G19 MOS-configured handguns without adapter plates. Once properly mounted (Loctite, etc. can be used, but screws shouldn’t be exclusively relied on), there shouldn’t be any movement for front/back or left/right movement. The device needs to allow for backup iron sight visibility through the lower portion of the display in case the optic fails.

The window needs to be resistant to environmental interference, such as fog or water adhesion. Also, the RFI specifies that the target allows for a clear target focus without distortion.

The reticle can be a green or red dot with adjustable brightness capabilities ranging from direct sunlight conditions to nighttime operations. A 3-7 MOA dot is preferred and the reticle emitter needs to be fully enclosed to prevent diminishment due to sand, dust, mud, water, or debris. It also needs to resist orientation interference. The hertz frequency needs to be good enough to appear as a solid illumination point, with no flicker, to the human eye, even with rapid movement. It needs to be capable of zeroing on a G19 or G47, but adjustments for windage and elevation need to require deliberate action and the use of a tool.

The Mini Red Dot should be powered by a battery that can be easily sourced and replaced without dismounting the device from the firearm. It needs to last for a minimum of 6 months on the “on” setting. Solar or rechargeable battery power is acceptable but not required.

According to the RFI, candidate optics will be subjected to a righteous battery of testing which cannot result in a shift of more than 2 MOA. Tests include 25,000 slide cycles with 9mm +P ammunition and slide cycle g-forces in excess of 7000G. It needs to withstand a single drop of 60″ while mounted to a loaded G47, as well as a direct impact to the rear and front. Tests will also include intense exposure to blowing sand and dust, high and low temperatures, and saltwater immersion. 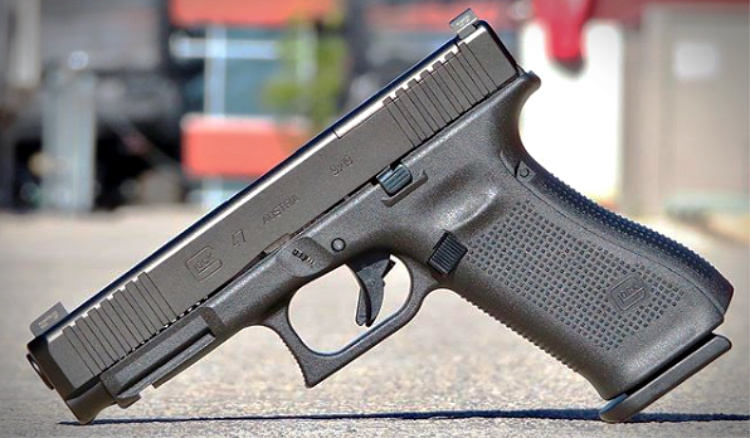 Glock G47 and WML to be issued to USSS/SOD

According to Soldier Systems Daily (who in all likelihood has it right), the recently announced Glock 47 is now on the list of authorized handguns for the United States Secret Service SOD. SSD says,

“Earlier today in an internal message to the Secret Service, Director James Murray announced the adoption of the same technology as recently selected by the US Customs and Border Protection, the 9mm Glock 19 MOS Gen 5.”

In addition to the agency-wide availability G19 MOS Gen 5 in 9mm (which will replace their .357 SIG P229s), the Secret Service’s SOD will be issued the G47 MOS and G26 (both Gen 5), WML (weapon-mounted light), and holster. These weapons will be sourced from the same contract as the CBP contract reported on last April.

Glock G47: specs and more about it

• The Glock 47 apparently puts a full-length slide on a G45 frame, with a barrel length identical to that of the Glock 17 – but the G17 slide will apparently not fit on a G47. That said, according to TFB, the end-user can swap the G47 slide for the G19 slide. 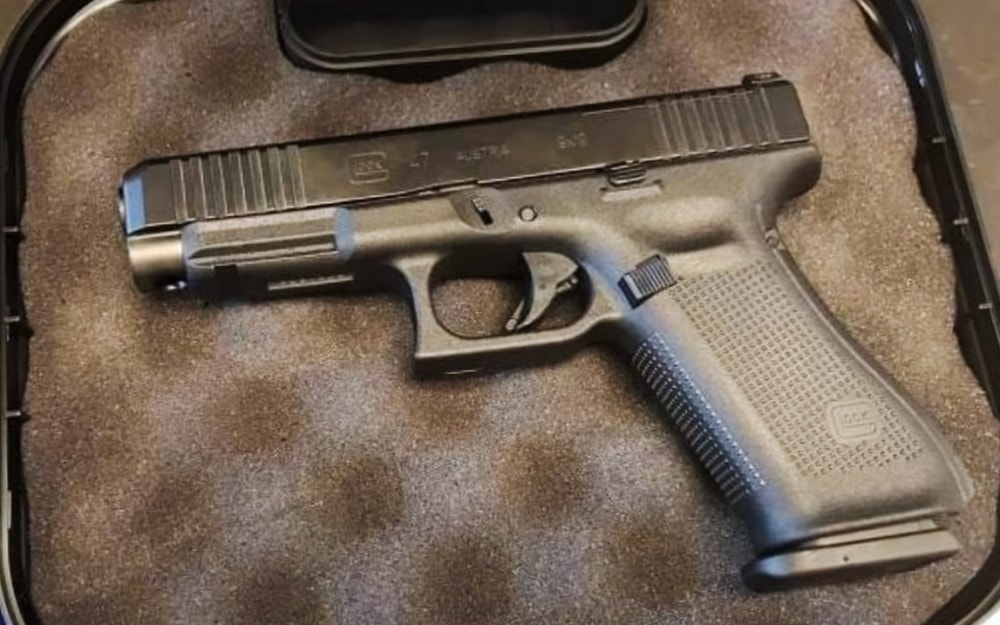 Glock’s latest model: the Glock 47. This picture has been floating around the interwebz, so we can’t give proper image credit. Though we certainly will if we find out the legit originator.• According to Tactical Life, it will be equipped with Ameriglo BOLD sights. This assertion is also made by Military Times, to wit:

“G47s come standard with Ameriglo Bold sights, and the ability to field an RMR sight depending on the needs of the end-user. G47s will feature a 100% parts compatibility with the G19 Gen 5 MOS pistol which CBP will also be picking up, which ultimately saves the agency money and hassle in the long run.” 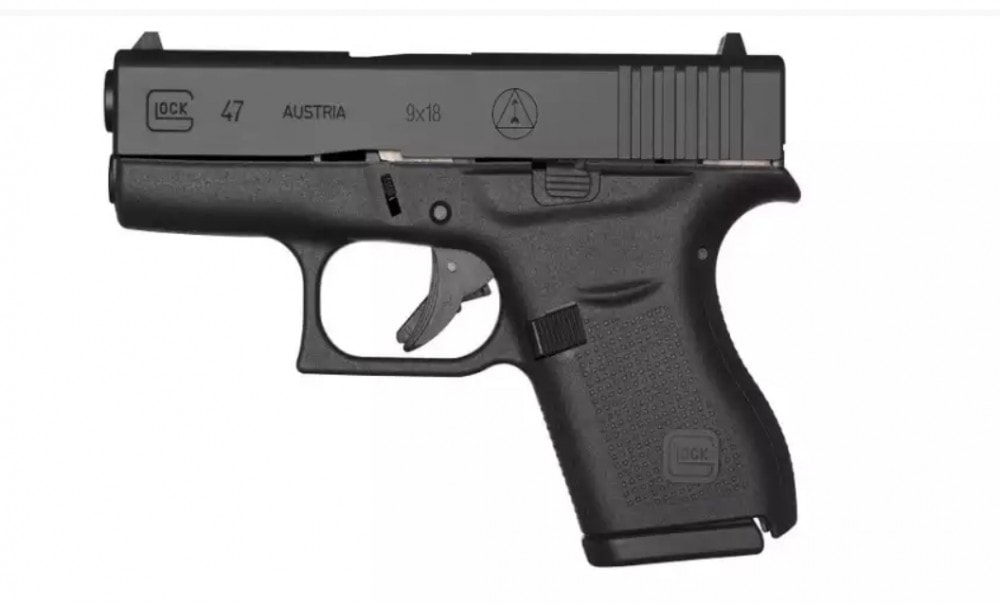 Glock 47 | US Customs and Border Protection

*The 9 x 18 Makarov reference is from an April Fool’s joke a few year’s back.

Yesterday CBP (US Customs and Border Protection) announced the award of a contract for new duty handguns. That contract will be worth an estimated $85 million over the next decade.

What has people all over the interwebz stirred up, however, is word of a Glock 47. Glock 47, they cry, what is that?!

Let’s be clear about this. We don’t need a G47! We have the [insert Glock model here]! Why would any business be so stupid as to release a new handgun just to make $85 million (from the first customer)? I can’t answer that question, though in fairness I wouldn’t have asked it in the first place. 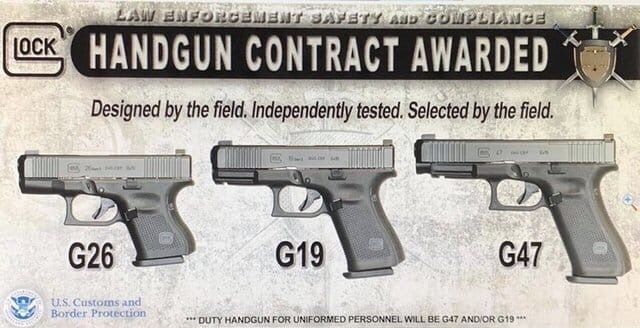 I’m actually more concerned with the repeated number. Remember the halcyon days of 2015? There already is a Glock 47 and it’s chambered in 9×18 Makarov!1 They announced that Glock 47 01 April, 2015, I remember it very clearly because it was right after the G43 was released. Apparently, Glock is now repeating nomenclature, which would make this the Glock 47 Mk. 2 Gen 5. I think. All the numbers and Ms and Xs and numbers start to confuse me pretty quickly.

For the sake of argument though, let’s assume the new Glock 47 isn’t a typo. That’s a safe bet, as the number 47 appears a couple of times on the graphic from that duty handgun contract (the solicitation for which was announced last July). Let’s also assume it’s chambered in the same good ole fashioned 9mm all the other Glocks are using.2

Note: there is a lot of sarcasm going on here. Hopefully, unlikely a couple of readers who completely missed the April Fools callout earlier, you’re reading this in the (hopefully) humorous manner intended.

If not, we’ll try hard. For those of you who are genuinely bitching about the Glock 47 and “how stoopid the Border Patrol is”, we say:

“Same small parts for every gun in the fleet. 100% small parts commonality across one of the largest and most widely distributed pistol customers on Earth? Fucking horrible idea. You’re right uninvested Internet person.” Jon Canipe

Speaking of the redoubtable JC, I wonder if there will be any issue with Magpul Glock mags in the new G47?3

Does it solve a problem a previous Glock model doesn’t? I have no idea. It does seem to help offer the opportunity to change from a long slide to a shorter slide, and it doesn’t seem like this took a massive amount of engineering to accomplish. Presumably, there are advantages to a weapon of this design…and presumably, even if there weren’t, a savvy firearms manufacturer might go ahead and build it for $85 million+. 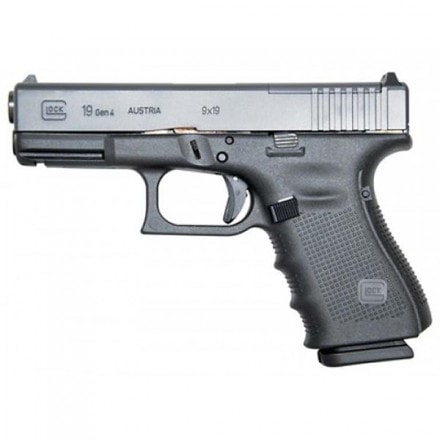 “You realize now that if an agency buys the G19 & G47 (two guns) that they get FOUR configurations out of it, right?

Glocks can now offer the same feature/function of swapping frames and slides that the P320 can… But they’re Glocks, so they get bonus points.  I’ll get a G47 just to have the swappable aspects covered since I already have a Gen 5 G19. Between my Gen 5 G34, my 19X, and now this? I still don’t have a reason to buy a G17. I’ll get a G48 when they finally come with the black DLC finish from the factory.”  Frank Woods, Tactics & Applications.

I’ll update this article as more information becomes available. In the meantime, I leave you with this compelling image from Jim Davis. The symbolism lies on several levels. 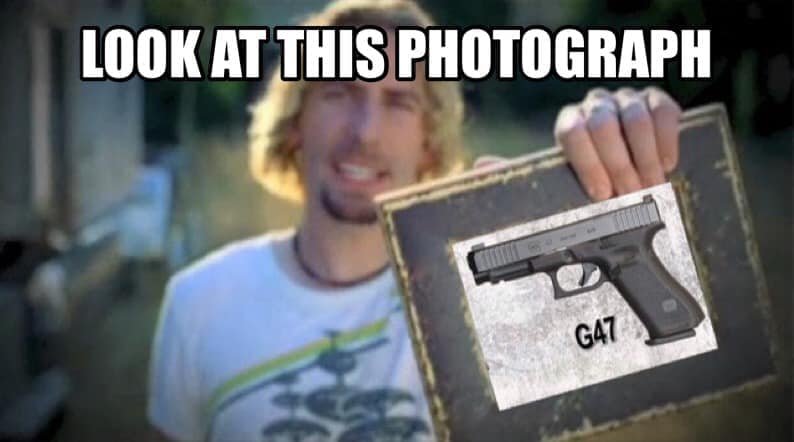 Thank you, Jim. Your profundity will help silence much tomfuckery.

Wondering about that new Glock? We have more articles…though if it’s an old article, it’s not a new Glock.

You can learn more about the Border Patrol (et al) in the following TFB video.

1 From this excellent article on Outdoor Hub: https://www.outdoorhub.com/news/2015/04/01/exclusive-glock-release-long-awaited-single-stack-9x18mm-makarov-glock-47/

3 I’m not really wondering, I just needed an excuse to do an internal link to another article on the site. I could just as easily made a crack about Raven Concealment Systems holsters, or the Glock 48. Oh, wait, I just did. 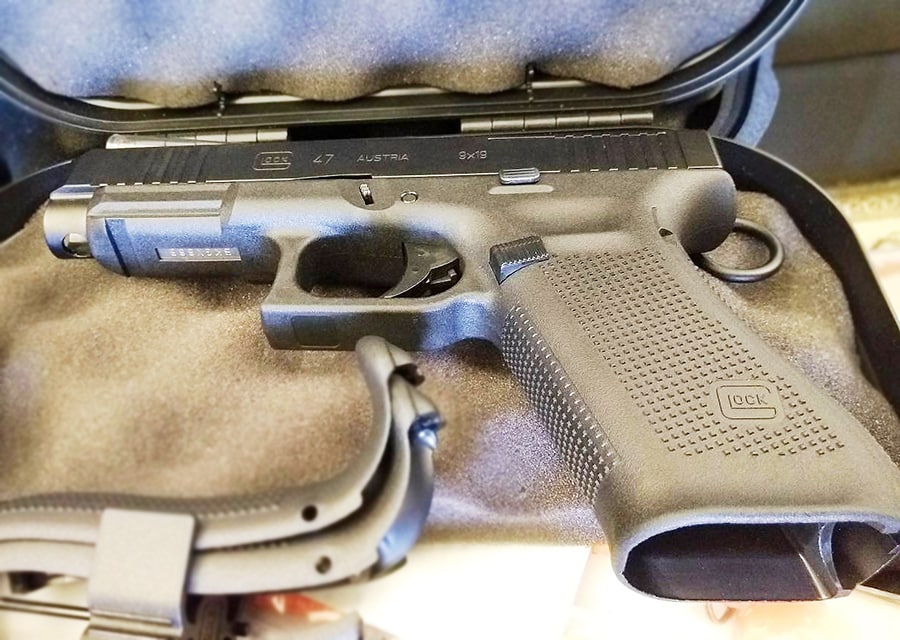 Meanwhile, we’re over here wondering what happened to angriestpat, or what the deal was with wizardyensid, and especially if alabrelle is as creepy irl as he looks on the screen. 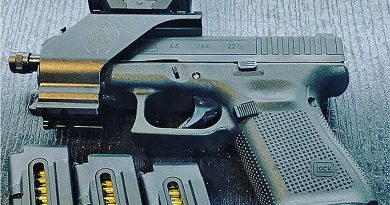 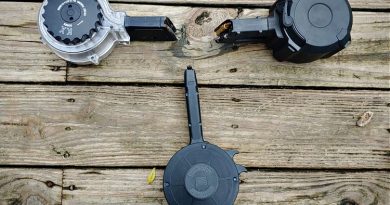 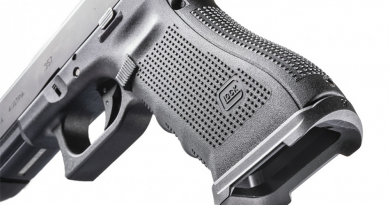