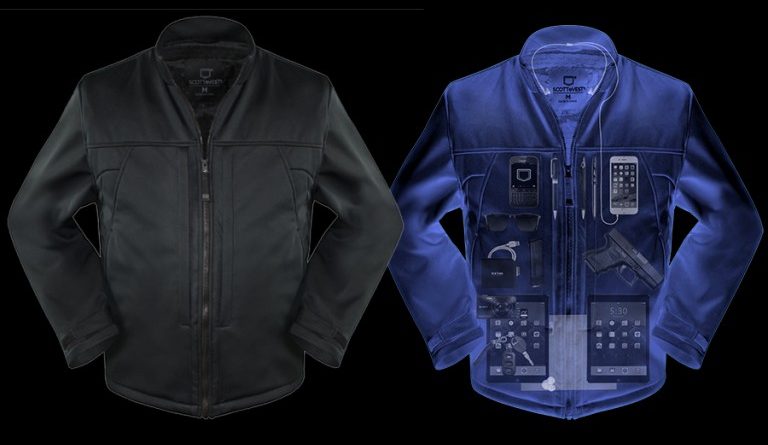 Today one of our “everyman” reviewers takes a look at an interesting garment — the ScotteVest Enforcer Jacket. Some have described it as being “over-engineered”, and for a few users this is accurate. Some of you, however, will be able to exploit its features very well. Erik himself wore it constantly while abroad and was able to forego use of a small day pack (which can be snatched away and often draws attention) to not only carry his gear on him but to avoid leaving his electronic devices in a hotel room. Check it out. Mad Duo

Enforce This: the ScotteVest Enforcer Jacket

Last year I wrote about my experiences with the ScotteVest Alpha Operator Jacket. At that time the company was sold out of the Operator.When I asked about the timeframe for a restock they told me they were retooling the jacket and would come out with a newer version early this year. Well, they have completed that task and (happily for me) sent me a brand new Enforcer jacket to test.

For those of you unfamiliar with the ScotteVest line of products, these are jackets, pants, vests, etc. that have a multitude of pockets concealed throughout. These pockets are typically designed in such a way as to not bulk out the clothing but instead keep the profile smooth. The Enforcer jacket does all this, but also includes modifications specifically for the concealed carry of a firearm.

So, to start with, the jacket contains thirty pockets.

Yes, thirty. But someone new to ScotteVest may well find the combination sunglass/pocket map pouch to be the jacket’s most important feature.

There are two large front zippered panels that are deep pockets, about 20 inches by 10 inches. Inside areas are covered in Velcro, designed to either hold a weapon or holster on left side with additional magazines on the right. These pockets are a little more substantial than their Alpha Operator forbearers and do a good job of keeping things where they need to stay, though I did find the magazine “pouches” a little small. This won’t prevent you from storing your magazines in the wells, it just means you may need a container or improvised fastener to make them stay put.

The two front panel pockets are very large — large enough in fact to hold a standard laptop if you want. If carried in this fashion the laptop will lie against your chest heading diagonally down, and the pocket does a surprisingly good job of not showing there’s a computer in there (or a pistol for that matter). In addition to these, there are two front hand pockets that are likewise surprisingly deep. The right pocket has not only a springy keychain holder that easily clips onto a key ring, but also a stretchy band designed to hold a water bottle. 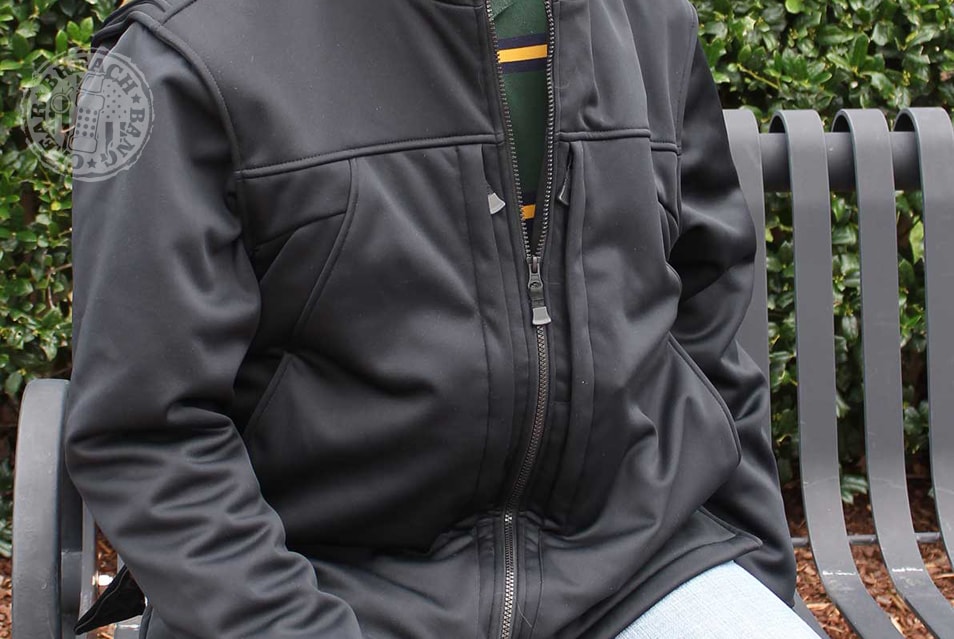 Inside the jacket, you’ll find the remaining pockets. Of particular note are two phone pockets, each able to handle a device up to an iPhone 6S easily or a 6 Plus with a complementary cover, on either side. You will be able to use the phone while it is inside the Enforcer’s pocket; in the Alpha jacket there was only one phone pocket, and the plastic on it was thick enough to make in-pocket use of the phone challenging. This jacket uses a thinner plastic and I was able to not only work the phone while it was in the pocket but also to have a conversation over speakerphone by talking to my lapel. 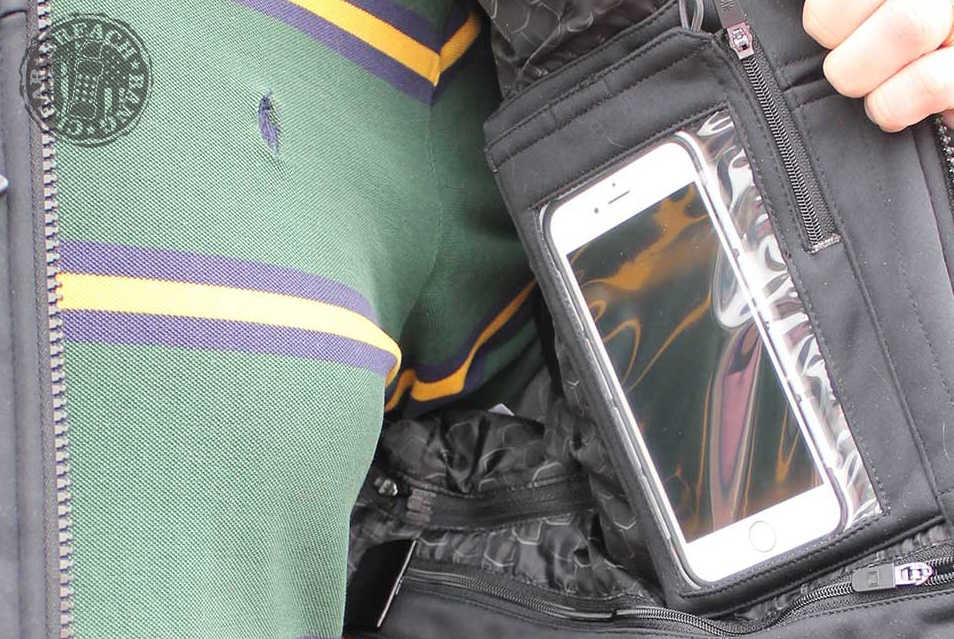 Also located inside are pockets for sunglasses, pens, cameras, an iPad, manila folders, and a RFID-proof interior pocket (a pocket within a pocket) designed to prevent pick pockets. Speaking of pickpocketing, the garment comes with a manufacturer’s $1000 guarantee it won’t be picked. According to Scott eVest, that consolation money has never been claimed.

Lastly, inside the sunglasses pocket is an attached cloth to not only clean glasses and screens but also hold a screened map of where all the pockets are. This can be helpful, given how just how many places there are to store, carry and potentially lose things. B-B-C Chief Editor David Reeder should never be allowed to wear one of these while traveling, though that would no doubt leave TSA agents salivating with anticipation.

It’s actually the sheer number of pockets that can be an issue with the jacket. There are so many places to store items it quickly becomes difficult to remember what you have and where (even for a normally well-organized person). Ironically, the quality of manufacture actually makes this more of a problem. The pockets are so well-designed there have been times I’ve forgotten something was stashed away until I unzipped the jacket and dug around. I’ve learned to do a little pat-down routine before taking the jacket off so I don’t leave anything in it. 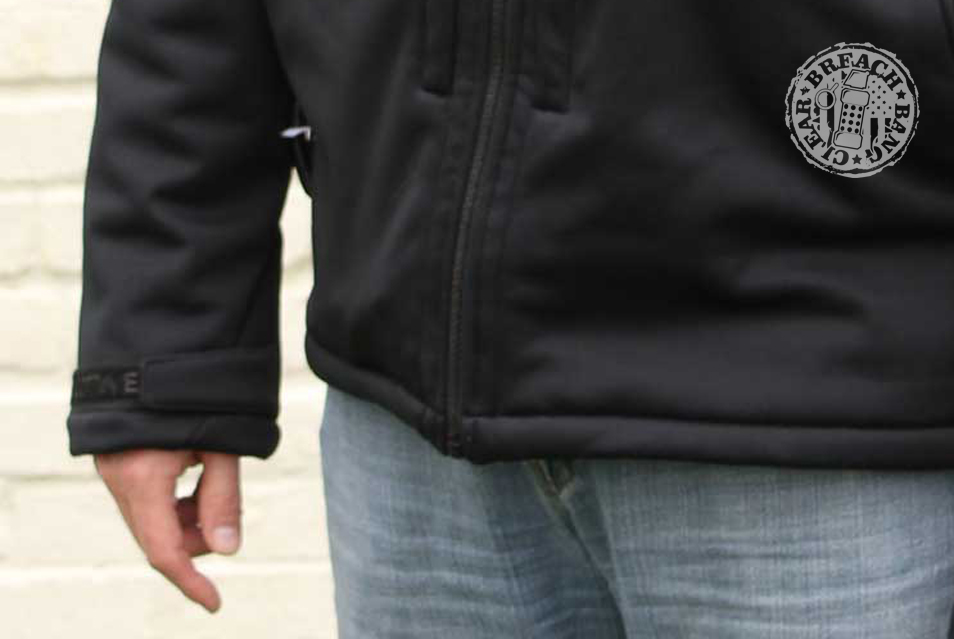 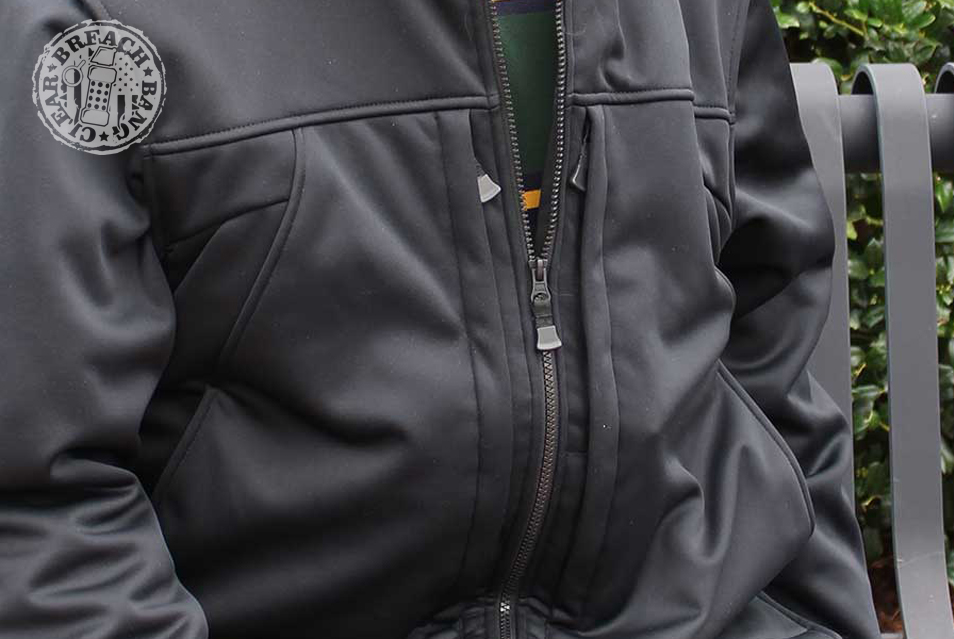 Another useful feature for concealed carry are the zippers found at the waist on either side. Anyone who has worn a LEO duty jacket or certain brands of concealed carry shirts will recognize them. While they’re intended to provide access to a holstered handgun, I’ve found them to useful in day-to-day activities such as fastening a seatbelt or pulling out a wallet. It’s a simple design idea that works very well.

The Enforcer is cut a little tighter to the frame than the Operator, so if you like a looser fit you might want to order a size larger than normal. My size Large jacket fit my frame fine, but after wearing the Operator for a couple of years, I definitely noticed the Enforcer was trimmer. Another big difference between the Enforcer and Operator is that the Enforcer’s sleeves can be zipped off, turning the jacket into a vest. The sleeve design is well thought out and looks fashionable, as does the vest alone. 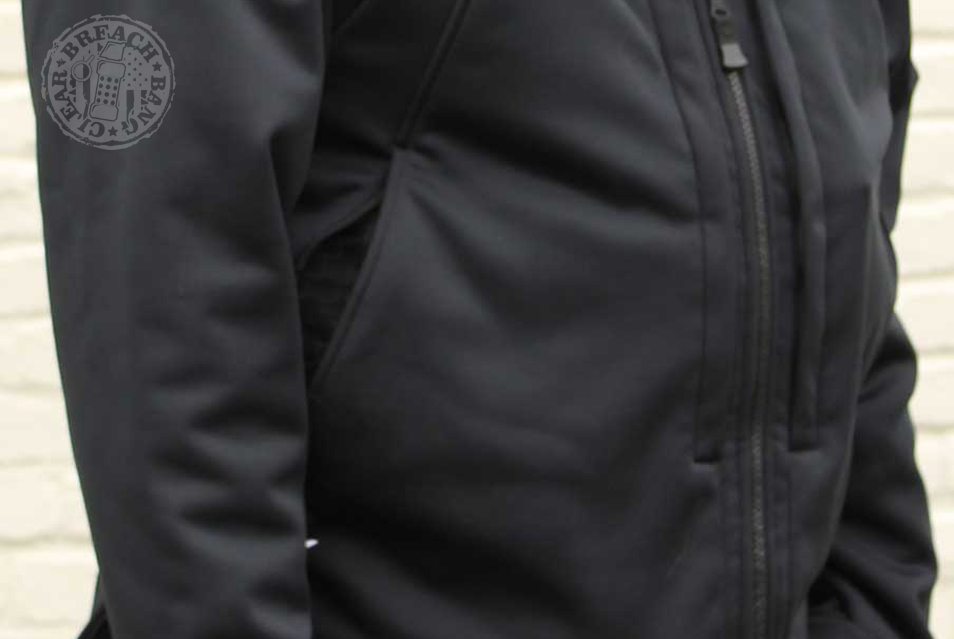 Weight wise, the jacket is heavier than a windbreaker but lighter than a coat (though not significantly lighter). I find it comfortable to wear in the 45-60 degree range. It’s heavier than it looks, due to all of the pocket construction, and if you start adding pistols, mags, phones, pens, and glasses you will definitely feel it, especially when you take the coat on or off. It’s important to note the pockets are designed to balance the weight they are carrying and they work quite well.

So the hardest question I’m facing right now is, which jacket do I prefer? I’ve gotten very used to my Operator but I really like some of the features in the Enforcer, notably the removable sleeves, the better front panel pockets, and improved phone pockets. The new Enforcer does have five less pockets than the Operator, but two of those are the sleeve-based knife holders, for which I have very limited use. The other three…to be honest, I’m not even certain where they were. I believe they were small pockets within pockets to hold weights or change. I never found them. Regardless, there is plenty of storage in the Enforcer and it all rides well on the torso. 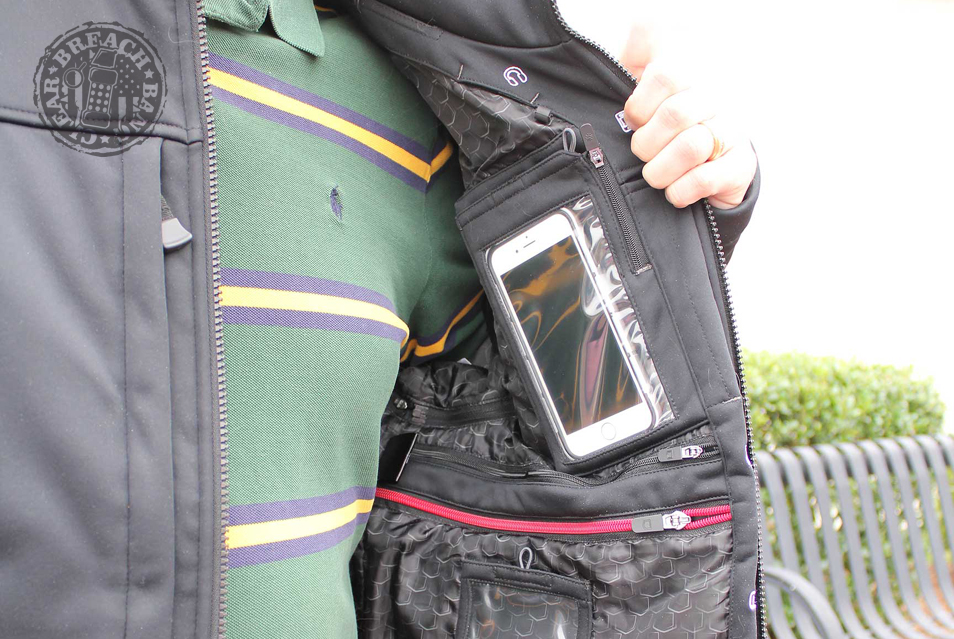 Ultimately, there isn’t a wrong choice and after wearing the ScotteVest Enforcer Jacket for a few days you’ll become spoiled. Next time you put on a different jacket, you’ll curse the fact that you only have two pockets instead of thirty.The Enforcer is a unique and well-made jacket that certainly deserves a closer look.

You can visit Scott eVest online here or give them a look on Facebook. They are also on Instagram, @SCOTTeVEST. 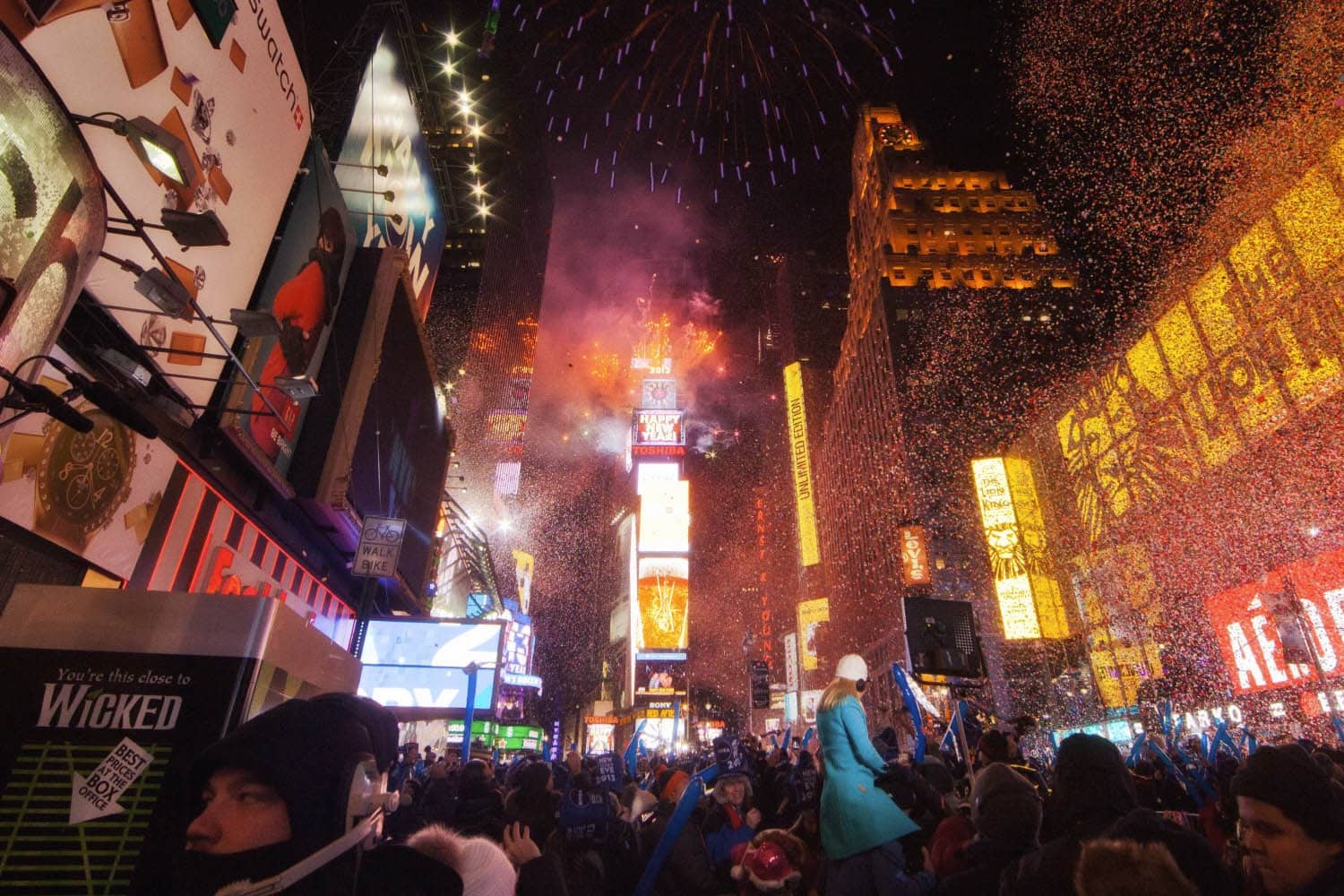 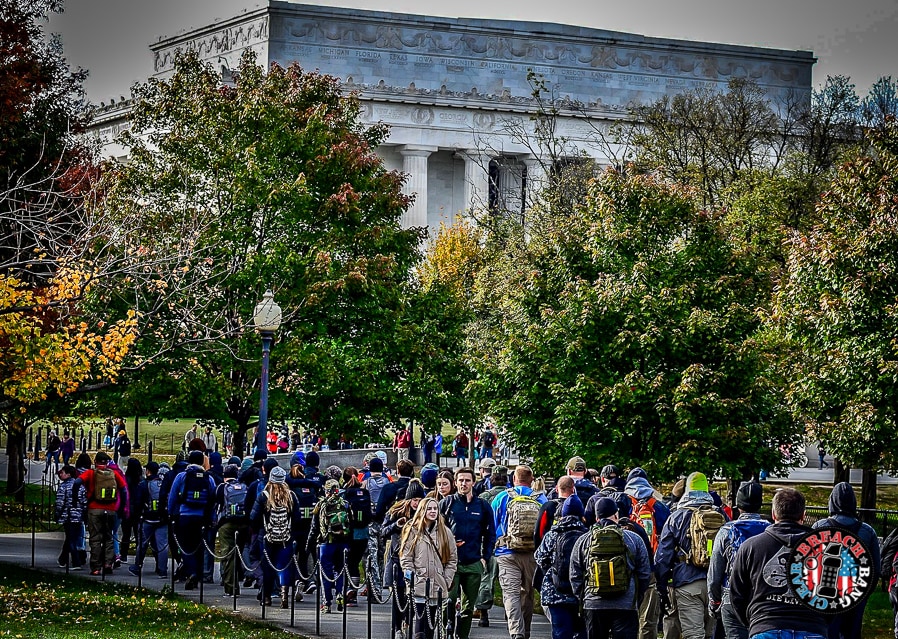 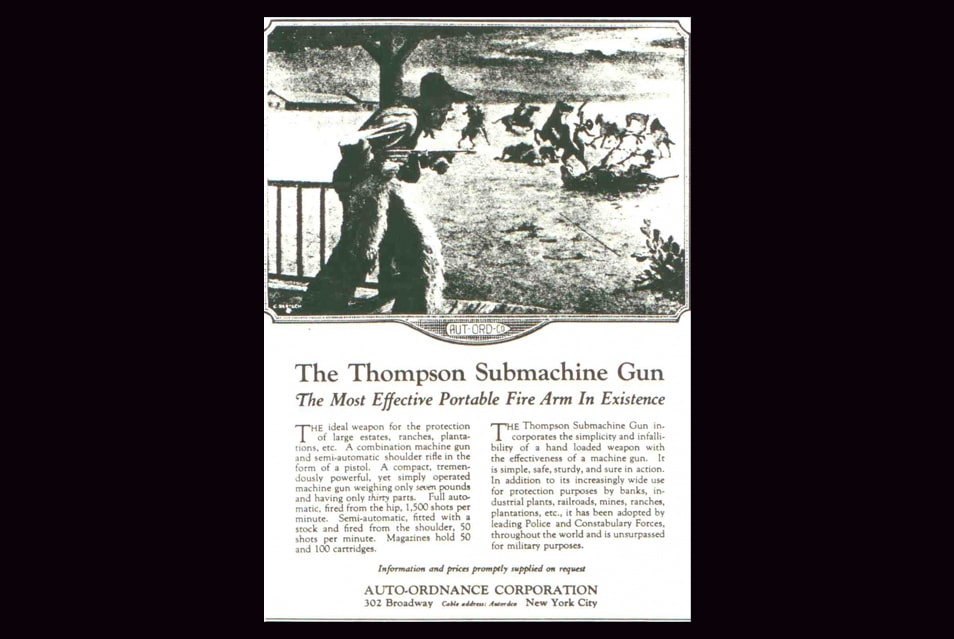