Minions - Getting Patched In

What does it mean, getting patched in? Why would anyone want to be patched in?

Who are these “execrable minions” we keep referring to anyway?

Once upon a time, writing for Breach-Bang-Clear was solely a labor of love. For that matter it mostly still is. Minions back then were the folks who believed in the cause and worked to for no more than a common belief in the mission and ethos. And because the Mad Duo would flog them if they didn’t.

Later, when we were a more recognized publication, the previous Minions thought to themselves, “Selves…what shall we do to ensure those new to our great and noble effort have the same dedication we had?” Hypnosis, blood oaths, and abject public servitude were (and still are being) considered, but ultimately a decision was made — any vetted contributor would be “patched in” as a Minion by earning it by 1) writing twelve feature length articles and donating them to the publication, and/or  2) providing inarguable service or guidance to the organization. 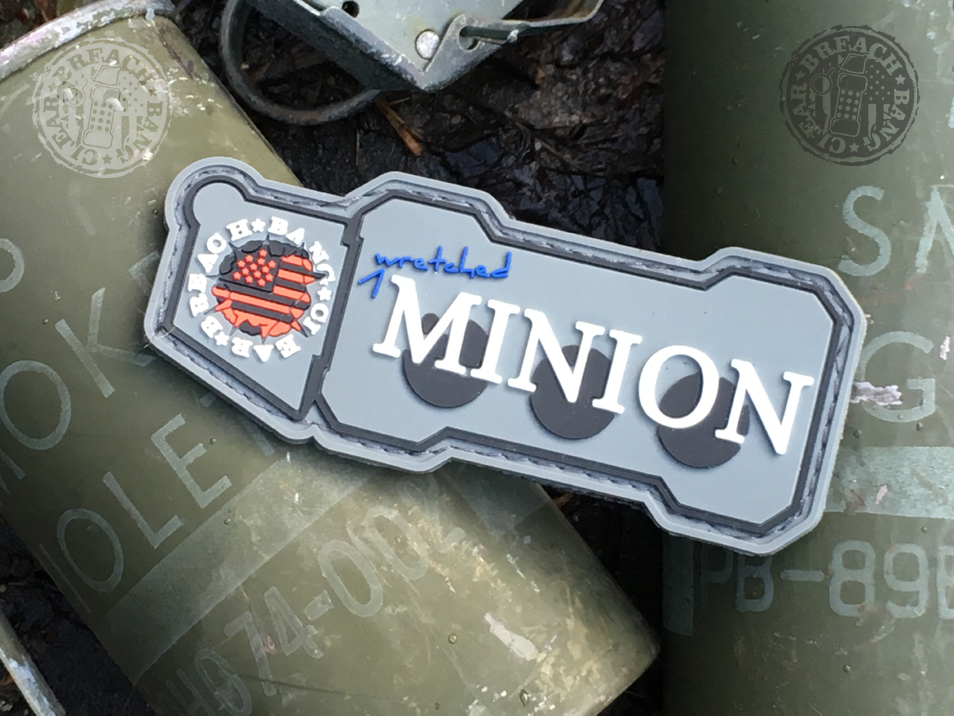 To be candid, the brass didn’t think anyone would care one way or the other, and we considered binning the entire idea of being “patched in.” The resulting brouhaha was ugly, however — to the senior staff’s surprise, most all our most accomplished contributors were deadset against ending the program.

And so Minion status remains, a cornerstone of the tribe. Want to earn a Minion patch? Start writing, making videos, or stashing bribe money now.

Here are a few of our patched Minions explaining the significance of the award, and why they wanted to earn it.

No shit there I was…

I spent most of Fall 2015 in Nangahar Province. Around that time Breach-Bang-Clear posted a notice on their website they were looking for writers. I was already well-established with Guns & Ammo and Recoil, as well as a couple other publications. But I didn’t read those magazines every day. I read B-B-C every day – scrolling their feed on my phone in a guard tower behind a PK, or in an idling HiLux.

So I wrote the wittiest, most sarcastic, self-depricating intro letter I could muster. I rehearsed it out loud in the shower or in my head in the gym.

I got so caught up in perfecting it that when I went back to the site to send it, the message soliciting new writers was gone.

So I deleted the letter

Even though I was writing for some of the leading print pubs in our industry…with nearly eight years’ experience in real life missions…I didn’t think I was cool enough, or experienced enough, for Breach-Bang-Clear.

Fast forward to SHOT ’17. It took me the entire show to figure out that my Las Vegas boss-for-a-week from RecoilWeb was the mastermind of the hilarious and informative webventure blog I’d been too nervous to approach.

We hit it off and he offered me a spot on the B-B-C team, offering to pay immediately (not standard practice). I declined.

I declined because the Minions were a group of writers and speakers and doers I had followed from the beginning of my military service a decade before. And…with absolutely NO disrespect intended to the editor…if I was going to finally have the chance to work among these folks, I wasn’t going to come in under any presumption of being the teacher’s new pet.

I’ve deployed to war zones in service to this country 15 separate times in less than that many years. Still not rich. Still not famous. But that’s okay. In all those trips to all those Godforsaken places I learned that the best things in life aren’t bought with money. They’re bought with time and sweat and lost sleep and tears of frustration and the obnoxious laughter of satisfaction in a job done well, a goal…no matter how small…finally reached.

These moments, these investments of ourselves into something outside, though fleeting in time are eternal in memory. These bits and scraps of time I’ve been saving like so many pennies are the currency I’ve used to buy my Minion patch – fair and square.

To be truly and fairly a peer among one’s own role models is an investment I recommend to anyone.

Mind of a Minion

A little while back, the head minion himself, David Reeder asked me to write a couple of words regarding what being a wretched minion means to me…here ya go.

I’m kidding of course, but it does illustrate one of the reasons. First and foremost, David is my friend. He’s a friend to many in the industry and don’t let his self-effacing bullshit fool you. He’s the consummate pro and is widely respected. What he’s done at BBC (don’t google that acronym, BTW) is he’s brought a little irreverent fun to the firearms and tactics industry. Long before there were meme pages poking fun at the industry, there was BBC. Writing for the industry is a tough balancing act, fraught with hurdles to maintaining ones integrity and professional reputation while trying to get the firearms information to a vast, disparate firearms buying public.

At BBC, I don’t need to walk that tightrope, I am able to write to readers that, for the most part, share my interest in all things awesome, from guns to booze to boobies.

It’s not just the topics, either. It’s the tone. I’m allowed to piss people off. My first article, the one on the worthless tactical reload, rustled many jimmies and that made me happy. Not because it pissed people off, but because it made people think and have to mentally defend their position. When I write for BBC, I write like I’m talking to a group of friends sitting around a table. At a strip club. While drunk.

Writing for the industry is not glamorous. It doesn’t really pay well, and despite what most people think, we don’t get to keep the majority of the stuff that we write about. Discounts sure, but usually about what’s available on Gov-X or other sites. Most of us here write because we love telling stories, and guns and related equipment are an awesome tool to use when communicating with like-minded people. Ultimately, that’s what BBC is about. We tell stories about the guns, gear, and lifestyle and we hope that you have as much fun reading it as we do writing about it. While we focus on good information, we don’t claim to exist to “fight the derp.” If you want to rock that Taurus pistol, I’m not here to tell you that your gun sucks, I’m here to give you ideas about how to best use it.

I’m proud to be a Wretched Minion because it represents everything that’s great about the modern industry. I can be funny, I can be profane, I can even piss people off. Mostly though, I can be a part of a group of like-minded people that genuinely love each other and love the people that read the site and follow us on social media.

Getting my Wretched Minion patch on my birthday was one of the coolest little things that I’ve gotten since I started writing 10 years ago. It is truly a prized possession. So David, thank you. I hope you have the balls to put this on the site, you pussy. [Choke on a dick, fucko, I put the whole thing on here – and thank you. DR]

Oh, and fuck the tactical reload.

It’s Not the Gun Rag Gods

I started reading Breach Bang and Clear while deployed a few years ago.  It seemed a rarity online for a page to pull no punches at things all of us in profession of arms constantly made fun of, but that nobody really publicly talked about. When I first began writing, I told myself that was the type of author I wanted to be.  Not one paid for by a sponsor to write what they wanted, but a real no-shit opinion.  Talk about things that really irritated me, or people who did good things and would have otherwise gone unacknowledged.  The Minion patch represented earning your stripes with the site, that I’d contributed enough and “paid my dues”.  That I wrote well enough they’d decided to keep me around.  These accomplishments mean something, much more than any free swag I would have received for “selling my soul” to the gun rag gods.