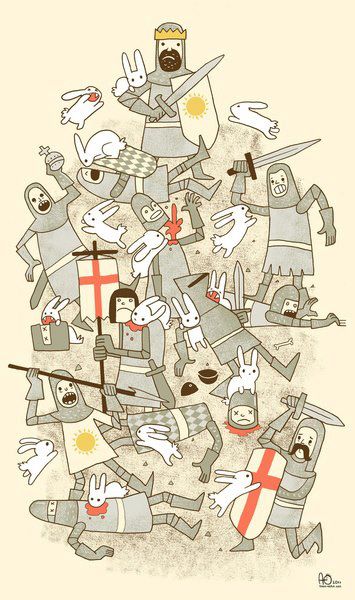 Beards have been a force multiplier since time immemorial. Vikings had them. The Rus and the Cossacks wore them, but that truth was lost over the years…sometime after the Civil War here in the US, most sources agree. It is not until recently that our trigger-pullers have begun to relearn the old lessons – and now find themselves much more combat effective with chin ghillies (or, as some call them, face kevlar).

Sadly the days of having a beard in the field appear to be mostly over, which is what happens when you give a war and garrison comes.

Anyway, the combat rabbit is a force multiplier that went ignored for far longer than the combat beard. Scholars estimate the use of rabbits in warfare was abandoned as as early as the first decade of the 7TH century. The following hand-lettered plate was taken from an original copy of the Historia Brittonum (grunts: Historia Brittonum) and it’s authenticity confirmed in a contemporary edition of the Trioedd Ynys Prydein, tranlated from the original Welsh (grunts: Trioedd Ynys Prydein) courtesy of the Smithsonian Institute for the of Study Asymmetric Warfare.

Some poor monk undoubtedly spent hundreds of hours laboring over that illustration by candle light.

In any case, much as Special Forces operators took to horseback in the early days of the war in Afghanistan, other operators from various SOF units performing C-FID mssions in the Balkans and Detroit are once again using combat rabbits. 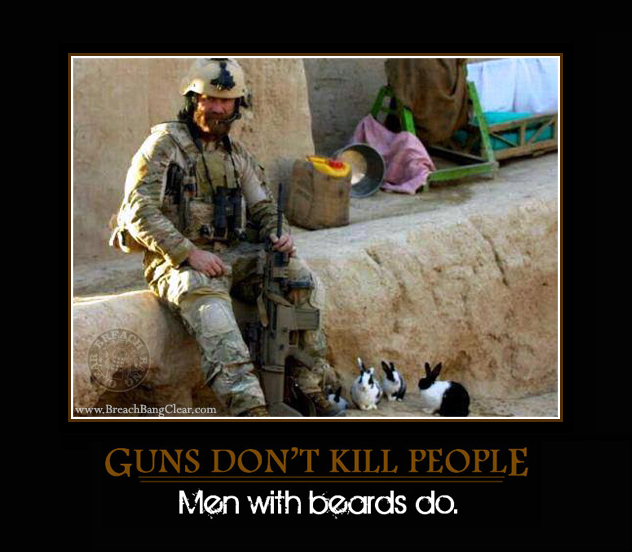 Note: it’s late, we’re drinking, Tarawa Terrace water is bubbling and brown and we have to be up in a couple hours. This whole rabbit and beard thing seemed like it would be a lot fucking funnier when we started writing it but can’t win ’em all.

One thought on “Beards and Rabbits as Force Multipliers”