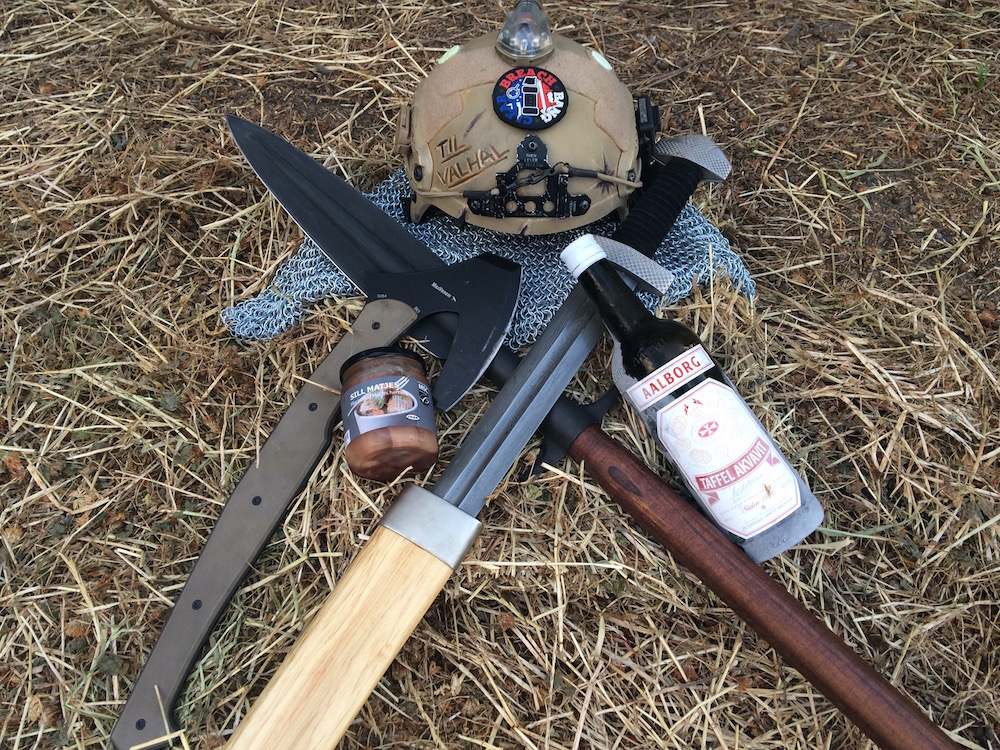 We figured with the start of the new season of Vikings upon us it was time for a Viking themed post. Some vikings use a breiðöx, others a suppressed SCAR heavy or M320 (though neither of the latter are terribly much use in the skjaldborg). Let’s talk a little about the old-school pipe-hitters today (i.e. not the type you see on the Anachrobellum modern Viking shirt). Let’s talk about Viking hardware. Mad Duo

Raiding season is fast approaching. Many of you yearn for adventure, the feel of salt-spray on your faces, and the chance to prove your honor and win such glory that your forefathers will sing your name and your children will ask to hear the stories again over the long next winter.

But where you might find yourself loading up with kevlar and lead-spitting black rifles, hopping into a HUMVEE or MRAP or crossing seas aboard a C-130 or C-5, I thought I might cast your minds back 1000 years to another group of hard-handed and steely-eyed warriors plying their trade by blood, fire and steel: the Vikings. I wanted to tell you a little about their wargear, and why it worked so well.

These Scandinavian warrior-traders would raid the coastal towns of the North Sea and Atlantic for booty, conquest, glory (and also just for the thrill of exploration). They reached as far as the Baltic sea and Mediterranean by littoral water and riverine routes, and there is archaeological evidence they went as far as Baghdad, not to mention colonizing Greenland, Iceland and almost certainly making it to North America.

How did they do it, what did they use?

Instead of Cordura, nylon, ceramic plates and kevlar, the Vikings typically wore quilted woolen or linen clothes with leather belts and metal broaches. Their armor consisted of helmets, shields and heavy leather tunics, or chain mail if you were rich enough. Rich or professional warriors might have had a metal helmet, but leather and wood would probably have been the basis for the average foot-slogger.

They fought mostly on foot and used their ships mainly as a transport to the scene of battle, so heavy armour was not part of the regimen since full plate armour isn’t something you’d wear to go over the side of a long boat. Chain mail is a real pain to make, not only in drawing out all the wire, curling it and cutting it into uniform lengths. But to make it effective, it needs to be welded or riveted together. It’s expensive and heavy, and only good for stabbing and slashing attacks even when over layers of padding. “Better to be fast and deadly” was the Viking way.”

Read the rest of the article at Castle Morningwood!