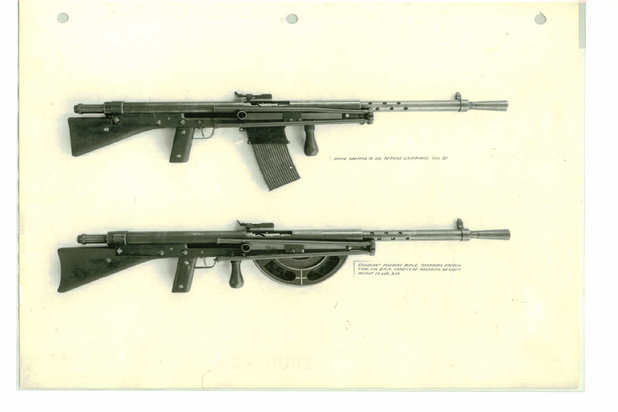 We have seen a wide variety of vertical foregrips (VFGs). Some useful, some stoopid, some disturbing – we will never unsee the one made out of a dildo by SOME GUYS IN A KICK-ASS ARMY UNIT THAT WILL REMAIN NAMELESS BECAUSE EVEN THOUGH IT WAS NEARLY A DECADE AGO SOME ASSCLOWN IS CREATING TROUBLE FOR THAT UNIT BECAUSE WE PREVIOUSLY MENTIONED THEM BY NAME. Though we’ve redacted the specific unit, we must make it clear that it was funny and well appreciated by our guys. Sorry you fellas suffered for someone’s sense of humor during OIF 1. Anyway, many people who could use a “broomstick” don’t, some who don’t need it, do, and many do improperly. Yeah, it sound counterintuitive, but there’s more to it than just clutching it like you’re choking your chicken. Guest writer Dave Merrill is going to explain why a VFG is more than grip – it’s a rifle multi-tool. Mad Duo

Benefits of the Boomstick Broomstick

The VFG (Vertical Fore Grip) has been around in some shape or form for over a century. The terrible French Chautchat machinegun sported a VFG behind the magazine. An even worse version, the Chauchat Mle 1918 .30-06, had one located in front of the magazine. Some variants of the Fedorov Avtomat (an interesting rifle all by itself) had a VFG in 1915 and the Farquhar-Hill rifle, developed in 1908, had a VFG whose position could be customized via a proprietary rail. This was a detail well ahead of its time.

Later some submachine guns and many other small or front heavy guns donned VFGs. The modern use of the VFG was born out of necessity. The M4A1, with its 7” railed forend, was soon crowded with additions and accessories. Once one has a white light and an IR designator on that short rail there isn’t exactly a whole lot of space remaining for the support hand. The VFG, along with much of the other accessories US military members used, caught on with the civilian shooting community once fighting overseas really kicked off. Many were purchased without ever knowing what the initial justification or compromise actually was.As time (and understanding) wore on, the VFG took on many forms. 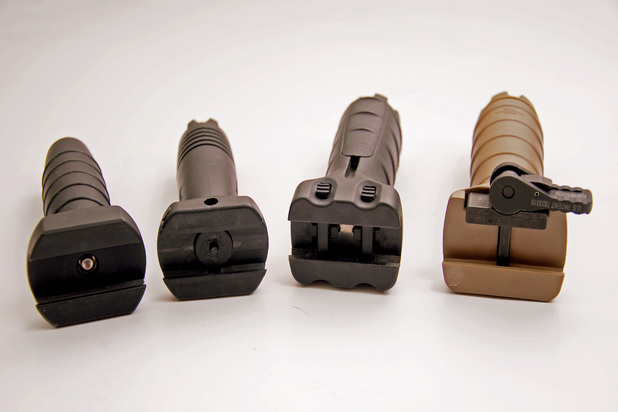 It is no secret that the VFG has fallen out of favor in many shooting circles. Alhough the VFG in its current form was employed for a hand to gain residence (a rationale negated by longer forends), sometimes the law of unintended consequences actually works in our favor.

Despite what many will tell you, the VFG is more than a simple handgrip; it’s a rifle multi-tool. Here are some practical roles the VFG still fills:

This is something that’s pretty commonly seen. The VFG is used as an index point to ensure a dependable and consistent grip on the rifle. Though a VFG could be used as a forward hand stop (or all derpyderp on the side for an index point for the web of the hand) the normal position is behind the hand. Some will use it like a simple hand stop and others will partially wrap their ring and pinky fingers across the front of the VFG and others will full-on gorilla grab it. Personally, I like the partial wrap hand brake method. 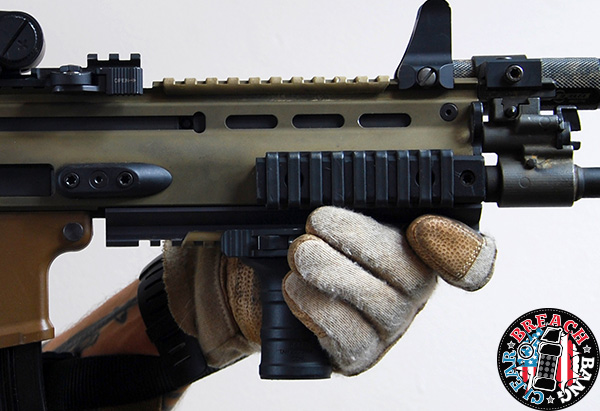 The ability to physically pull a carbine into the shoulder aids in recoil management, which is particularly important for precise follow-up shots and maximizing control during full-auto. A VFG provides a solid surface for the hand to abut with less strain on the wrist relative to simply grabbing the forend. More leverage means better recoil management.

Outright I’ll say that I prefer to wear gloves whenever shooting a rifle of about any make. Nonetheless, in our current era of slim heat sinks (er, I mean “lightweight modern modular free-floating handguards”) sometimes you really need them. Those things don’t always cut the mustard, or perform as advertised (*gasp*).For sustained firing or full-auto application, most handguards are going to get hot as hell and unless you’re rocking asbestos, the gloves might not cut it (and Hephaestus help you if you aren’t wearing them at all). It is noteworthy that some piston systems (explicitly those which vent gas under the handguards) will aggravate this issue. Functioning much like the “fixed bale” modifications some Marines made to 1919’s in WWII, having a VFG allows the shooter to get his hand ‘away from the hotness’ and continue on.

The front face of a VFG can be pressed against a piece of horizontal cover to support stabilization when firing. A VFG can also act as a monopod. If behind a piece of vertical cover, the handguard can be pressed against the side and then canted until the VFG also makes contact. This gives the rifle two points of contact on the cover surface instead of just the one and makes for a more stable shot. The end of the VFG can be jammed against cracks, niches, pocks, and other imperfections to increase support. These methods are also decidedly handy if one only has the use of one arm. 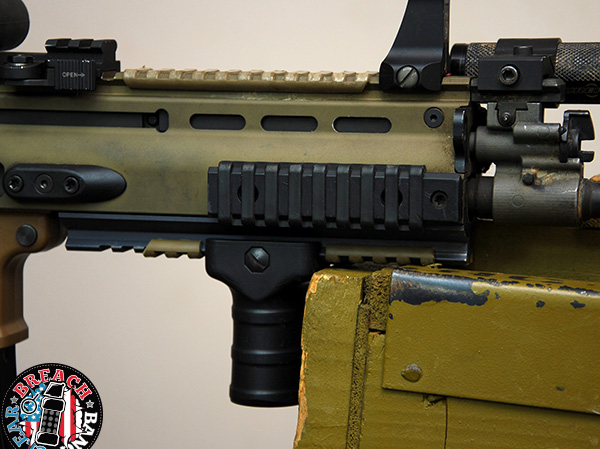 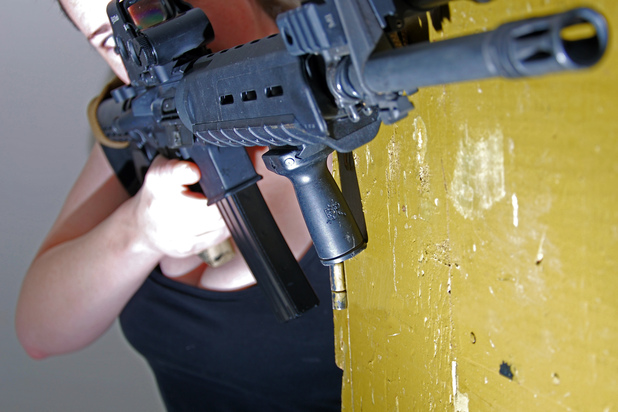 There are countless methods of dealing with a gun grab, from the simple to the Systema.Regardless of the technique, just like with regulating recoil, a VFG allows one to have maximum leverage to maintain control.

Giving your support hand or sling shoulder a rest for a while patrolling can be advantageous. Taking a gorilla grip on a VFG can be a simple solution. The bottom of the VFG can also be used to transfer weight to a piece of gear (top of a pouch or even your belt buckle) for a period of time, giving your support hand and sling shoulder a break without drastically cutting down your reaction time.

Many VFGs on the market offer some modest storage space. This can be utilized to carry batteries, bottles of lubricant, or other *ahem* critical mission-essential supplies. 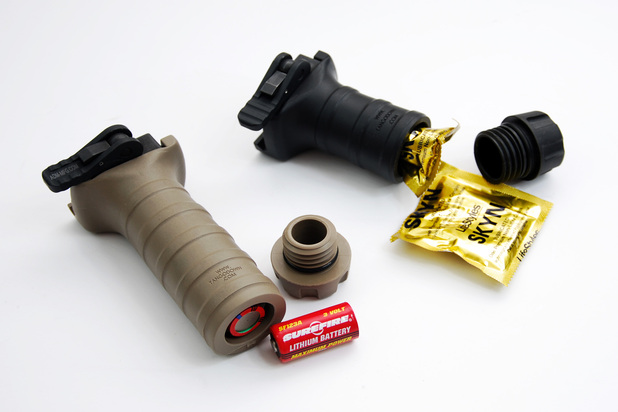 If you don’t have a sling for whatever reason (many LEO patrol rifles unfortunately don’t sport slings, let alone a modern 2-point) performing a transition can be problematic. A TTP that is commonly taught is to hold the rifle diagonally across the chest by the support hand and then bring the secondary (or alternatively, a less-lethal option such as a Taser) to bear. It should go without saying that this is less than ideal. The rifle isn’t held very securely and, depending on the musculature of the shooter and the weight of the rifle, can and will go all over the place (sometimes burning the hell of your neck!) if any additional movement is required.

If your carbine has a VFG (not carelessly colocated with the magwell) a better wayis the following: Obtain a gorilla grip on the VFG while swinging the rifle down to your support side. Tuck the buttstock of the rifle solidly into your armpit ensuring your support hand is pulling upward via the VFG and then execute your draw stroke. Because your carbine is held in place by two firm points of contact with your body, the rifle rides sturdy and in place even during movement. 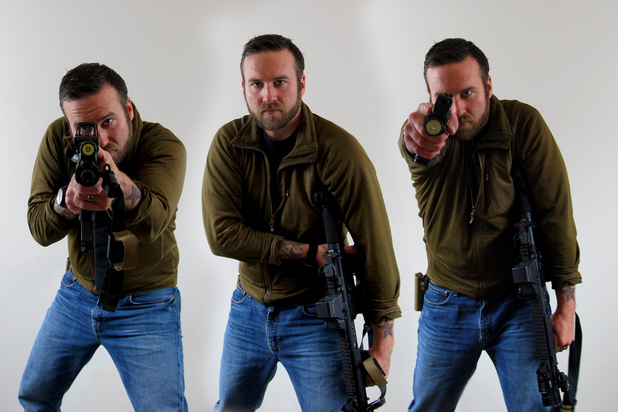 In a perfect world none of our compatriots would ever get hurt—however, the world ain’t perfect. There are times when injured ally has to be physically taken out of a kill zone. The fewer people you have available for this undertaking the harder it is and the faster it has to be done. There are many ways to get someone to safety alone but I’m not going to re-write the entire TASK 081-831-1046.

A quick and effective method is to execute a two-handed drag. Simply put: run up,crouch down, grab him by his gear with both hands and move backwards [ostensibly] to safety. You’re going to want to secure your rifle first so it’s not smacking into your legs or tripping you up. Regardless of the style or type of sling used (or even if you don’t have a sling at all) an expedient way to assure your rifle stays out of the way is to utilize that VFG. Wedge the front of the VFG into one crook of your elbow and the back of the rifle’s pistol grip into the other. Yes, you now have T-Rex arms but you also maintain positive control of your rifle while using two hands to drag. 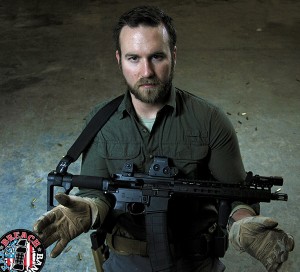 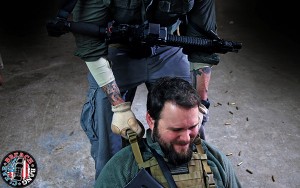 Other Notes and Conclusions

Because a VFG is not a critical piece of gear regarding how a weapon physically functions you don’t have to spend top dollar on one. If it breaks, hell doesn’t open and the world doesn’t come to an end. It’s better for a VFG to snap or pop off than to get caught in a doorframe or for your rail system to get warped. It is noteworthy that some of the high end QD VFGs (one of my favorites, Tango Down, for example) usually will indeed come loose from high impact before it breaks a rail. Since there are hundreds of VFGs manufactured from different materials with diverse fastening methods I couldn’t even begin to go into the pro/con breakdown of each. Do some astute reading and research and divine accordingly.

A VFG is not a 1:1 functional replacement for specialized tools. Dedicated forward barricade grabbers (such as the Ares Armor Hammerhead or Noveske K9) are going to do a better job than a VFG in that role. A Bobro bipod is going to be more stable than a VFG

acting as a monopod et cetera—no one willingly buys a multi-tool to fill the role of a filet knife. The benefit of the VFG is that it’s one tool that can wear many different hats depending on your needs.

None of this is to say that you should throw everything else out and only use a VFG. I have rifles with numerous forend configurations (from single to double hand stops to slick to bipods, depending on the rifle). I love the free market system and the myriad of options our industry produces is definitely positive overall, but man, there’s a lot of snake oil too. Before advocating or discounting anything, one should be able to successfully articulate and demonstrate what exactly they get out of any weapon widget; understand the actual, not just perceived, advantages and disadvantages they bring to the table.

One thought on “Benefits of the Broomstick Boomstick”