Last weekend Slim and I were introduced to tattoo artist Brandon Bond of All or Nothing Tattoo by our boy Aaron Cowan (Sage Dynamics). My first thought – who the hell is this weird sonuvabitch, and why is someone like Aaron hanging with him? He’s got big damned holes in his ears and ink all over the place, he sounds like he’s been gargling razors in between smoking unfiltered Drinas and he’s about three steps busier than frenetic (grunts: frenetic).

I’m not going to lie. I’m a judgemental asshole. I looked at this demented “artist” with his color-splashed arms and chain hanging off his hip and thought, What in the hell am I doing hanging out with this counter-culture lunatic when I could be watching Slim’s back while he chases drunk fat chicks?

Let me tell you all sumthin’, and it’s not something you’re likely to hear more than once or twice in a lifetime. I was wrong.

Brandon Bond isn’t just a Tier One tattoo artist. He is also one of the nicest guys you will ever meet, and he’s one patriotic sumbitch. I don’t mean patriotic like he has a flag outside his business (he does), I mean patriotic like he lives-eats-breathes America and damn near bursts into tears when he hears the Star Spangled Banner. I mean patriotic like he’d happily fight even the baddest bad ass if said bad ass was disrespecting the flag, mocking a disabled veteran or failing to take his hat off when they play the National Anthem. This guy is a passionate, honest-to-God no shit USA-loving, 2ND Amendment-supporting patriot. Tell you something else too, this dude is smart. Like big brain CIA smart.

Yeah, he can be an asshole and he’s obviously aware of his own status, but I don’t blame him for that. He’s earned his ego. It’s pretty hard for me to forget how fucking wonderful I am too. You know what the best part about being me is? No one else gets to be.

In any case, we spent some time talking guns, tattoos, whiskey, his new little boy Remington (congrats man!) and the Amendments (not just the Second) for several hours last Sunday night. We looked over his AKs, acted like we weren’t impressed by the eleventy hundred tattooing trophies outside his sanctum sanctorum (which was awesome) and sipped Georgia moonshine. It was a great evening, and we’re going to tell you more about it later on. For now though we want you to check this video out. This is our new bestest buddy Brandon interviewing James Yeager from Tactical Response (remember when he went Full Yeager? Never go Full Yeager).

This is interesting for a couple of reasons. First, this is someone from completely outside the “tactical industry” talking about the Tactical Response ethos, Yeager’s various diatribes (which most everyone either loves or hates, with no one in the middle) and the specific TR class (which interestingly Brandon had great things to say about). Second, it’s part of Brandon’s ongoing efforts to educate the tattoo industry about the Second Amendment and responsible gun ownership. That’s more than a little unexpected, at least where me and Slim were concerned. We’re used to 2ND Amendment supporters looking more “traditional”; that’s as short-sighted as it is self-defeating. We need to embrace all responsible gun owners, even if they are tattoo-covered workaholics who ricochet off the walls at a hundred miles an hour while they talk.   In that respect our meeting with Brandon was damn educational.

Anyway, here’s the video. We’ll talk some more about it (and our thoughts on Yeager, good and bad and about that unfortunate beard) later. We’ll also talk some more about Brandon and his outlook on the 2ND Amendment, gun ownership, parenting and the responsibilities of citizenship. Check it out:

Now I’ll tell you something else, from one trigger-pulling 1:6 scale doorkciker to you 1:1 scale readers: Brandon may have changed me and Slim’s mind about going to a TR course. Don’t get me wrong, I believe you should pretty much always be able to learn something from a class even if you don’t necessarily agree with the instructor (perhaps especially if you don’t agree with the instructor) but we had some other guys that were higher on our “hope to train with list” than James Yeager – McPhee and Awerbuck, for instance. That said, Brandon really liked the class. “He changed my fuckin’ life man,” Brandon said. “Not just how I used the weapon, but my mindset about carrying the weapon. Yeah he’s got the haters, but everybody’s got their role to play man. I don’t want to learn tactical reloads from Wayne LaPierre and I sure as fuck don’t want Yeager in front of Congress. This is important shit, we’re all on the same team little bros.”

Do it now, NASTY! 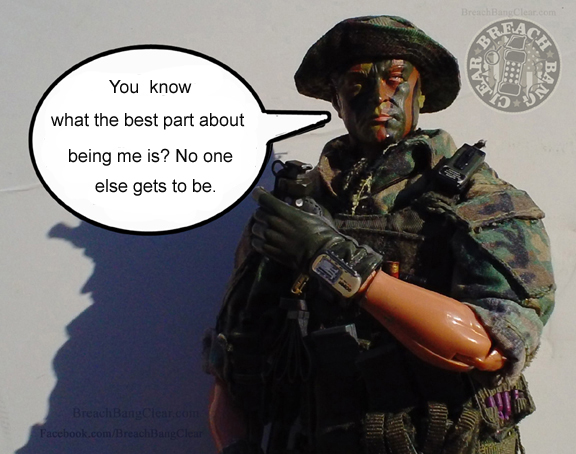