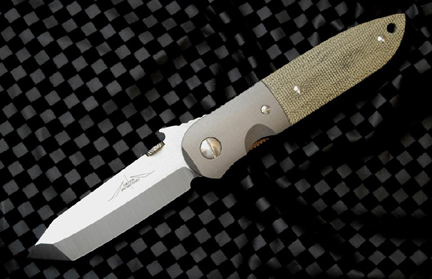 Ernest Emerson (Emerson Knives) is a stand up guy, as those of you who know him personally already know. Emerson Knives as an organization is a class act. For instance, they recently declined to attend the New York Custom Knife Show because of Hurricane Sandy and his refusal to make money in a place where so many people have lost so much (his message to that effect is below). He is, however, donating some of his awesome custom work to a benefit on the victims' behalf.

For those of you who're interested, this appears to be an Emerson…in space. Which is hard to beat.

Finally, here's a look at some masterwork in progress:

I have spent quite some time thinking about making this decision.  We have decided we will not be attending the New York Custom Knife Show this year.

As much as we both love the show, the crowds, the City and the East Coast, I just don’t think it is right for us to go.  After the storm and the devastation it has caused, the hardship and the loss of life, I cannot with clear conscience sell my knives and leave with money in my pocket.  Especially when I know that only a couple of blocks away there are those who have lost everything, their homes, their business, and their loved ones.  I know that there are some who will see this as a letdown and may cast me or my decision in a negative light.  I will be ok with that.  I believe that there should be some healing time, some recovery time, and some rebuilding time so the wounds are not so new.

I can only think of Bette Midler having her big costume party while rescue workers were searching for missing loved ones and pulling bodies from the wreckage.  It made me sick.  Two or three weeks is not enough time.  Two or three months and I would have come to the show.  I hope that all of you and your families are ok and safe.  Our prayers and thoughts go out to those so affected by this disaster, and our sympathies to those who have lost so much.  We will be putting together something to donate to the right charities in the next few weeks so that we can help in our own small way.

I hope you understand my decision and why it was made.