Tank Week | Rising from the Mud 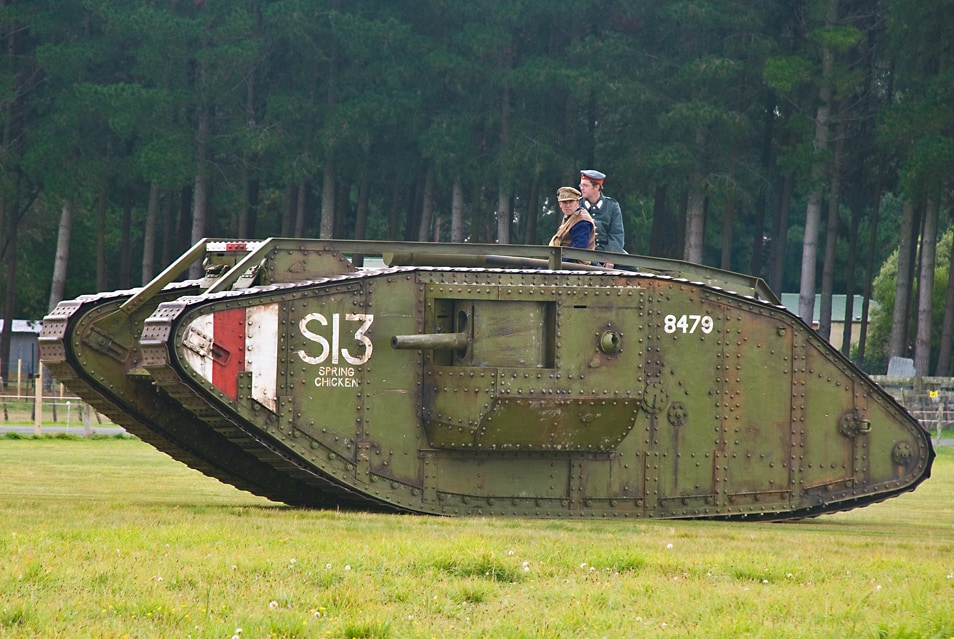 The standard vision of combat on the Western Front of the First World War is one of trenches, barbed wire, and soldiers going “over the top” to get slaughtered in No Man’s Land. There is a certain amount of truth to that vision, especially from mid-1915 to late-1917. Few people realize, however, that the first and last years of the war featured mobile ops on a grand scale by both the Allies and the Germans.

While certain high-level commanders deserve the scorn heaped upon them for feeding their men into the meat grinder over and over, such characterizations are sometimes overblown. After the Battle of the Somme in 1916 it was apparent that manpower and artillery weren’t getting it done offensively and something new was needed to break the stalemate. The solution was the British Mark I tank, which made its combat debut in September, 1916. 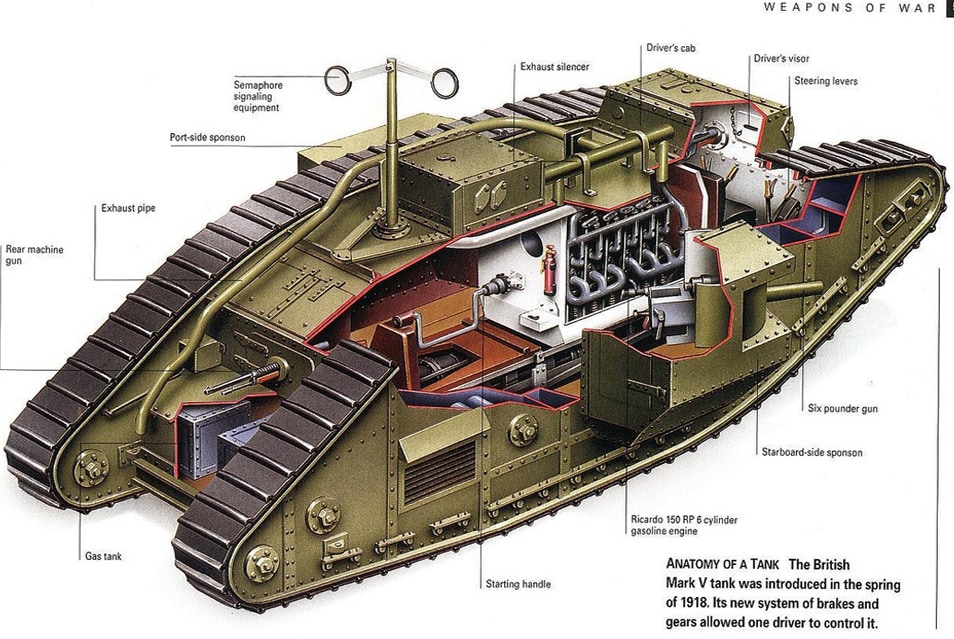 The Mark I was slow, prone to mechanical failure, and indifferently armed. It also produced exhaust fumes which literally threatened to asphyxiate the crew. But new weapon systems always require further development and the Mark I was the first necessary step. Not only did the British have to learn how to build the tanks, they also had to learn how to use them effectively. The early results were spotty but promising and by the autumn of 1917 British armor, in the form of the improved Mark IV, was ready, if not for prime time, then at least for a major test.

That test came on 20 November at the Battle of Cambrai. No less an authority than German General Heinz Guderian laid out the three basic prerequisites for a successful attack by armored forces: suitable terrain, employment en masse, and surprise. Cambrai was the first time an armored attack met those basic criteria. The results changed the face of the war. The British massed 397 tanks in three lines, supported by infantry and a creeping barrage, against the Hindenburg Line, the strongest defensive fortifications on the Western Front. 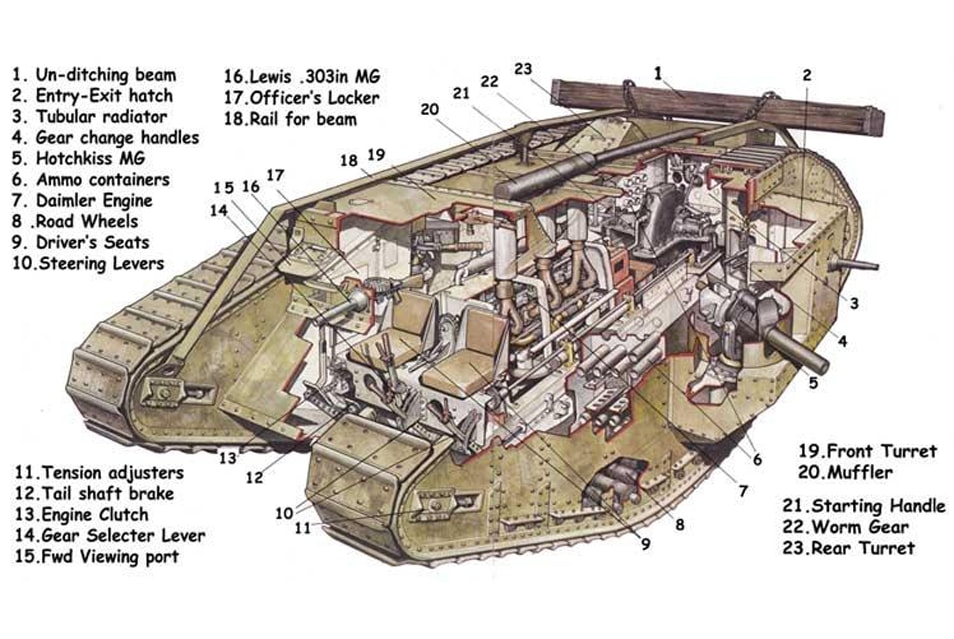 The German defenders were taken completely by surprise when the armored behemoths emerged menacingly from the mist. Rifles and machine guns were obviously ineffective, unless they were equipped with the special armor-piercing rounds developed by the Germans, which most were not. Even at a speed of three to six kph, the tanks moved too fast for the Germans to target them with a defensive barrage, the usual tactic, especially since they didn’t get hung up on the wooden and barbed wire obstacles in front of the trenches. Only when the front and intermediate defensive lines were breached, and the tanks forced to disperse and fight individual pockets of resistance, did they become vulnerable to enemy fire, usually in the form of direct-fire artillery over open sights. Most of the German infantry spent themselves on fruitless counter-attacks or just bugged out, further hindering the efforts of the command to get a handle on the situation.

By the end of the day, The Hindenburg Line had been ruptured across a sixteen-kilometer front to a depth of nine kilometers. The British took 8,000 prisoners and captured 100 guns for a cost of 4,000 casualties and 49 tanks. Compared to the 310,000 British casualties in the just-concluded offensive at Passchendaele, which saw no appreciable gains in return for the slaughter, those numbers were eye-opening to say the least.

Cambrai was a brilliant tactical success…on the first day. Thanks to constant mechanical problems, only 49 tanks were available for the follow-up attack on 21 November and only 67 for the final push that began two days after that. The tanks had achieved a tactical breakthrough, but there weren’t enough of them to force an operational-level breakout. The British did have a plan though. They had mustered five full cavalry divisions for the exploitation, which they committed on the evening of 20 November on the heels of the armor’s breathtaking advance. In a final refutation of the viability of horse cavalry in the face of modern firepower, these five divisions were decisively turned back by the fire of a thin screen of German reinforcements rushed forward in desperation from divisional recruit depots. By the first week of December, the Germans had regained most of their lost ground and even inflicted heavy casualties on the British while doing so. But the striking power of massed armor had been proven to those who cared to learn the lesson. 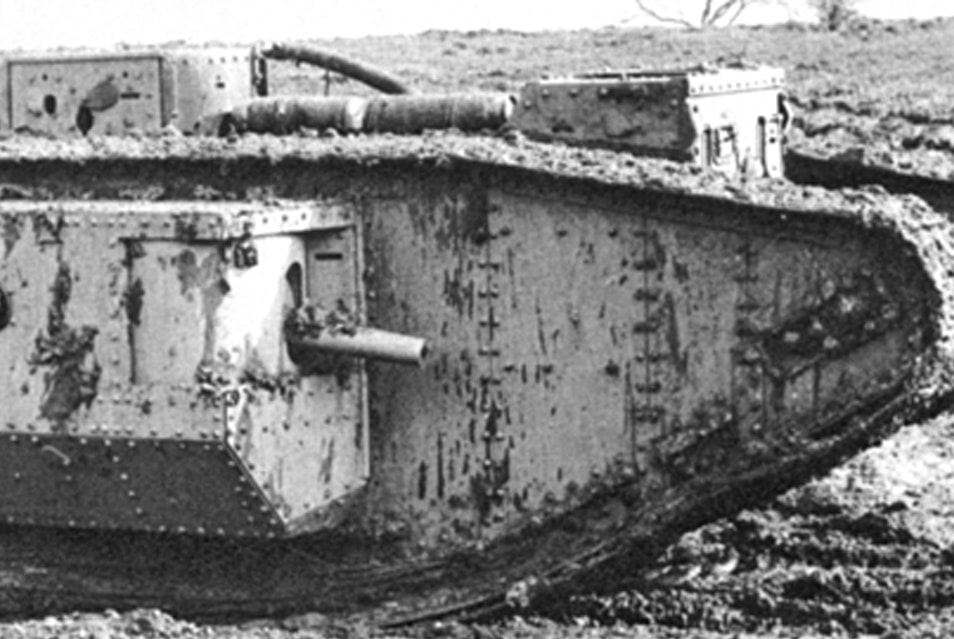 The summer of 1918 would see the success of Cambrai repeated by the French at Soissons and, most significantly, by the Australians at Amiens on 8 August. German Field Marshal Erich Ludendorff referred to 8 August as “the darkest day for the German Army during the war.” The Allies employed approximately 500 tanks in each engagement and achieved startling breakthroughs. Yet, as at Cambrai, they lacked the ability to properly support the armored thrust once it outran its infantry, artillery, and just as crucially, logistical support. The tank had arrived in a big way, but it would have to wait until the next war to reach its full potential.