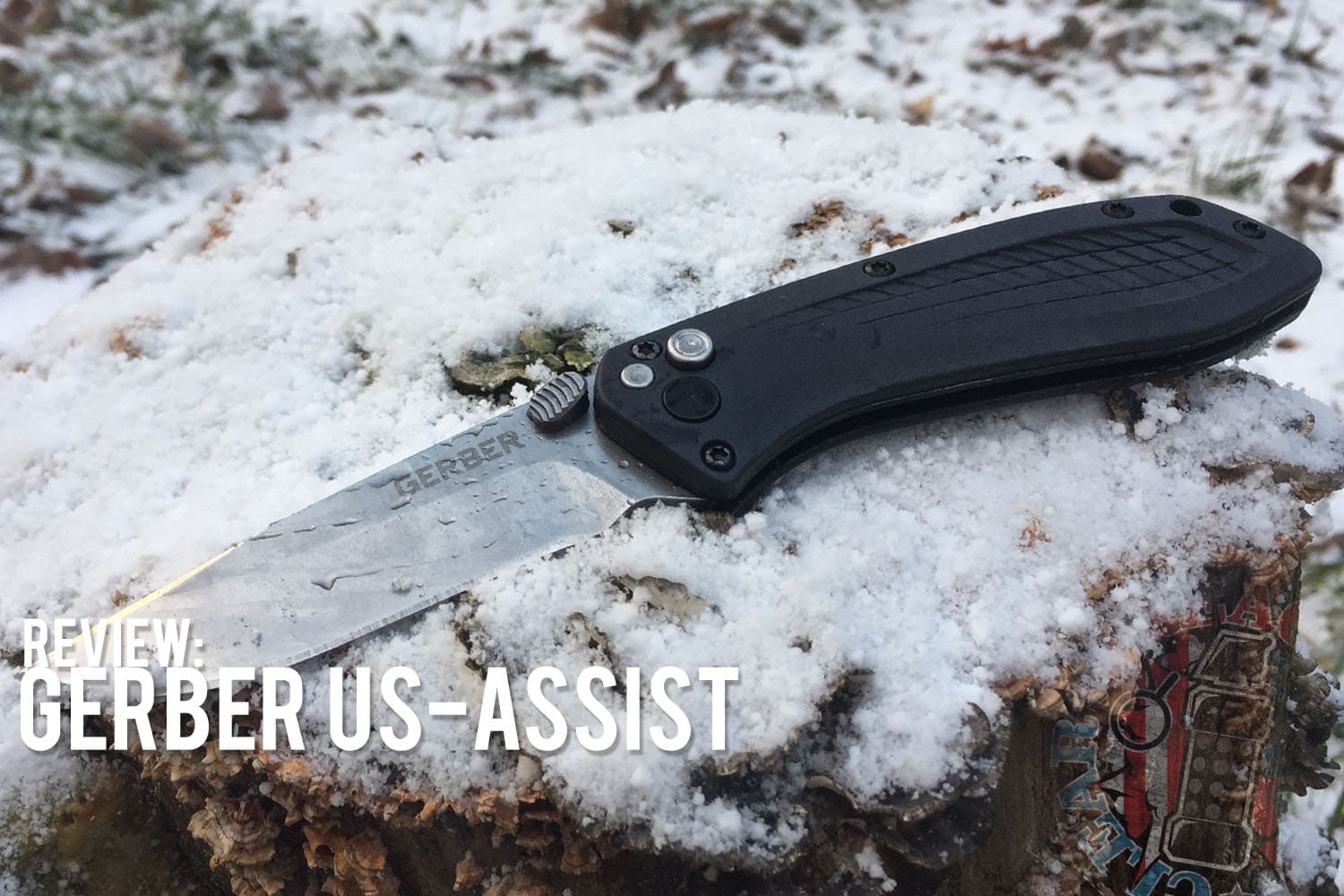 Today our living clone of Brienne of Tarth joins us for another review. Check out her piece about the Velocity Systems SCARAB if you missed it the first time around. Mad Duo

The Gerber brand can be found on Walmart and Home Depot shelves across the country and, for that reason alone, it has become a household name. If Billy Bob down the street doesn’t have a Buck knife in his pocket, he probably has a Gerber he picked up at his local hardware store. I get it: all you knife snobs have already clicked on another article about a knife that has a maker, not a brand. But if you’re still reading, we’re going to take a look at Gerber’s implementation of their new “ball-bearing deployment system”, appropriately (and inappropriately?) dubbed “B.O.S.S. Tech (Balls of Stainless Steel)”. 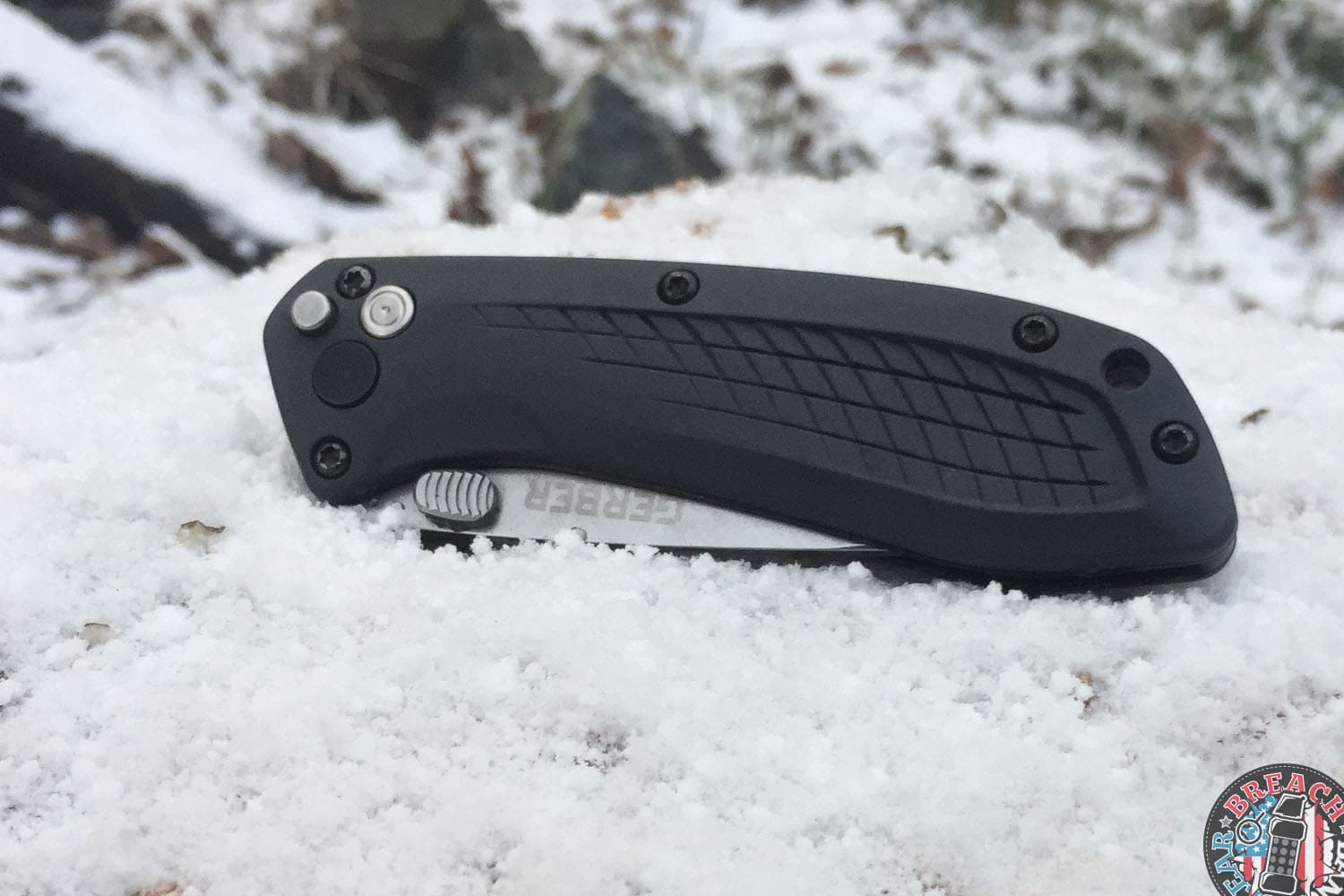 While ball-bearing pivot systems is not new technology to knife manufacturers, the US-ASSIST is the first offering in Gerber’s assisted opening line of folders. The US-ASSIST is a simple pocket knife that doesn’t get too deep in the weeds with special features, which seems preferable when introducing new technology that could drive the design of all their future folders. The blade itself, sitting at 3” in length, is offered in 420HC fine or serrated edge, as well in a higher end, and higher price point, S30V fine edge. The blade also possesses thumb studs on each side of the blade. The handle, 4.2” in length, is glass-filled nylon with a lanyard hole, if you’re into that sort of thing, making the knife 7.2” long when open. It also possesses a plunge lock and a pocket clip, notably designed out of a sturdy wire construction, instead of the standard solid metal, and can be relocated to the opposite end of the handle. 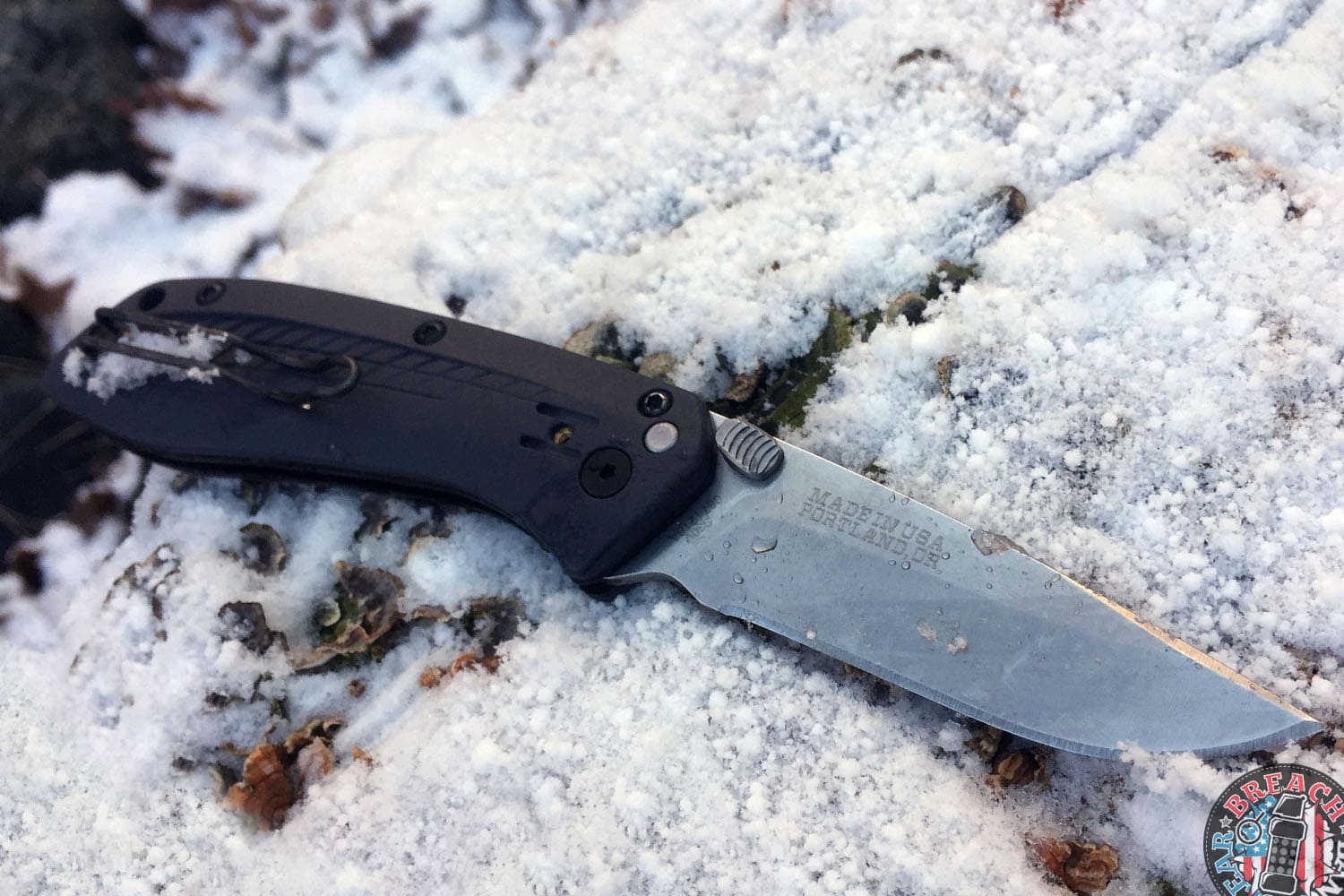 Gerber made the purpose of this knife pretty clear: it’s an everyday carry pocket knife. It’s not meant, or marketed, to ground pounders going on deployment or law enforcement working the streets. It’s certainly not meant to be utilized as a weapon. At the end of the day, the US-ASSIST is designed for basic everyday use as a tool. So that’s what I used it for. I carried it around everyday in jean pockets, uniform pockets, in my daily carry bag around town, and to the other side of the country, using it for whatever I needed to get into or through (which was mostly Amazon shipping boxes of cat litter, my plastic coffee lid with poor venting capabilities, and various cords sprouting from my work computer). 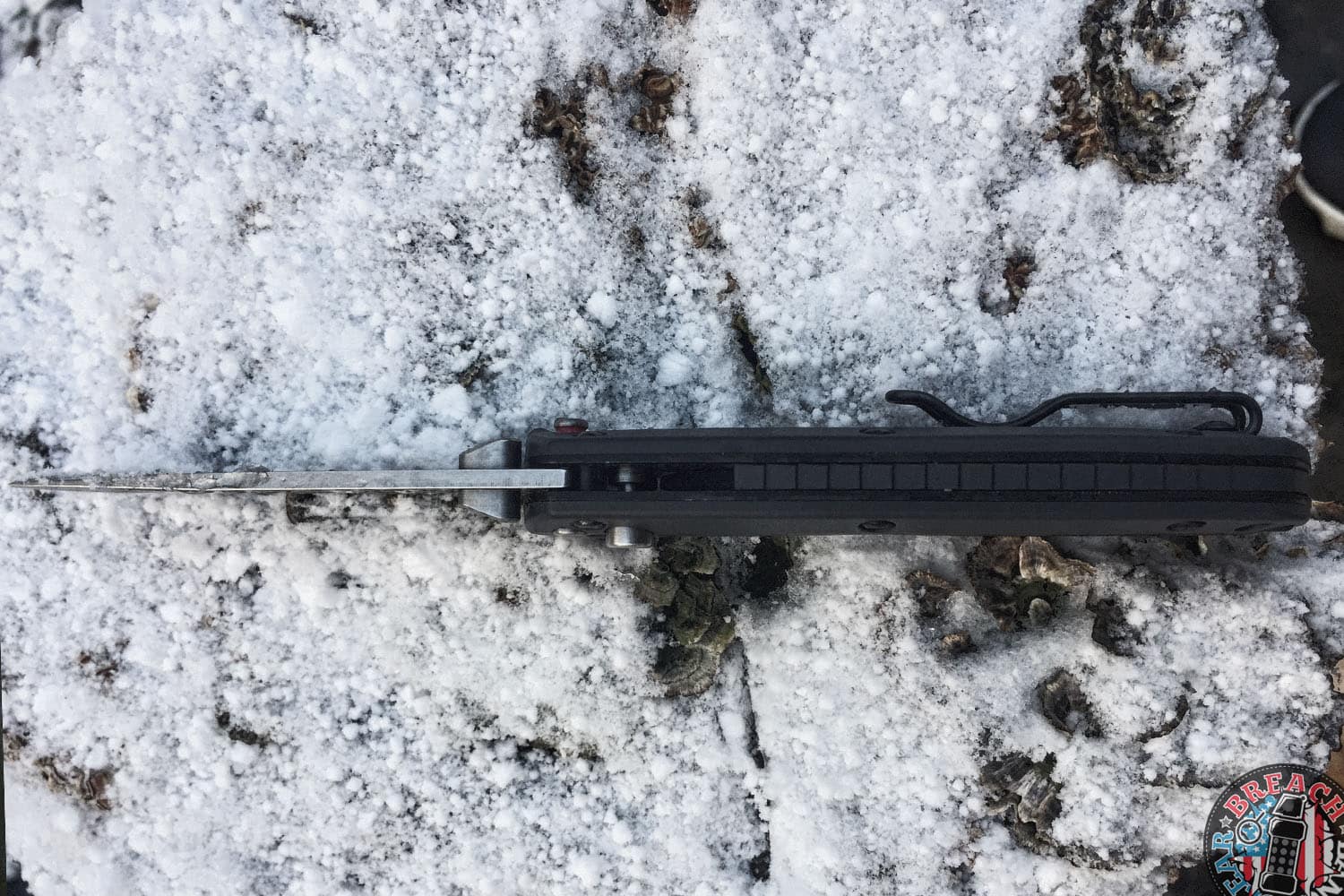 What I liked about the US-ASSIST:

It fits nicely in girl pockets. 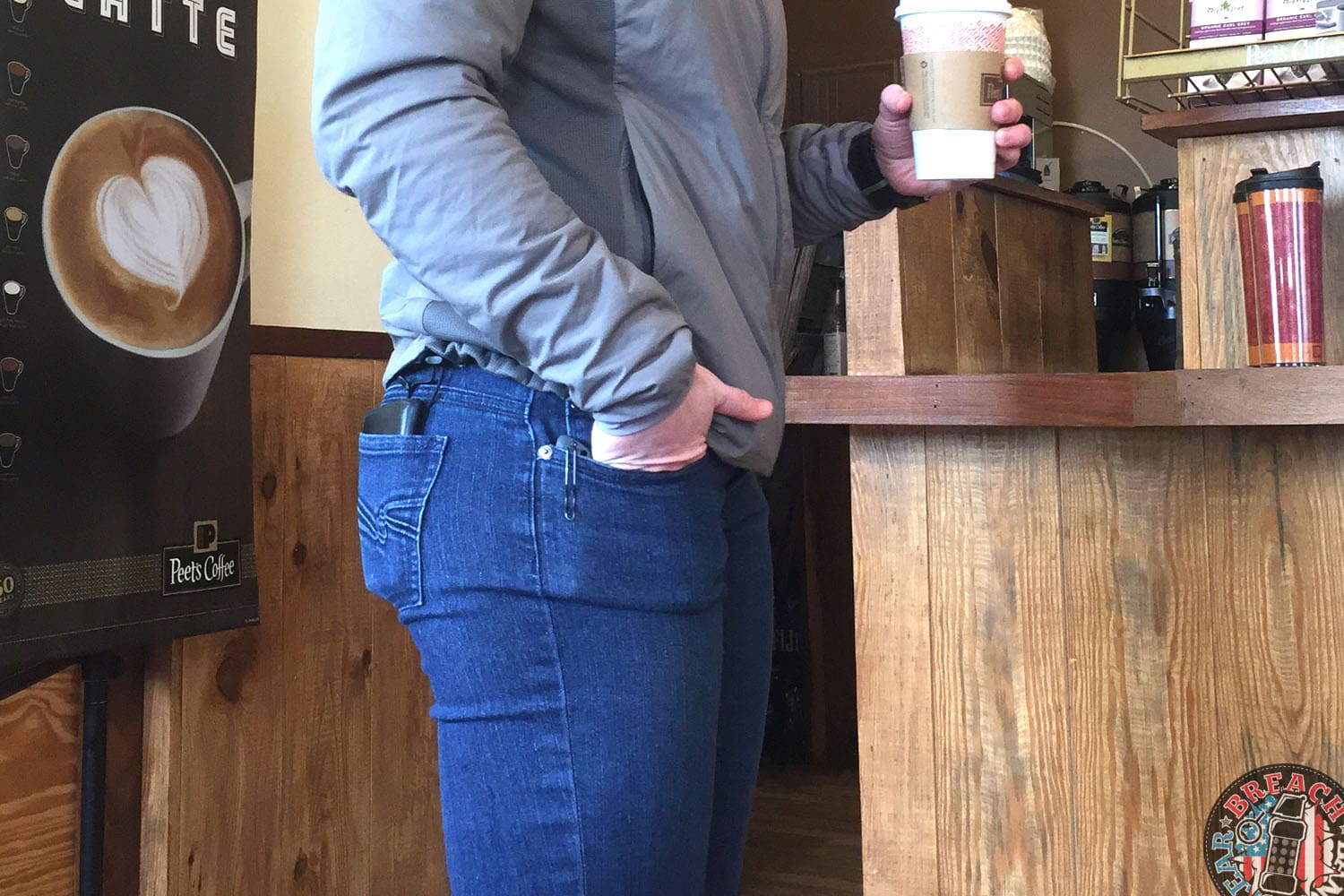 At 4.2” in length when closed, I was surprised that the knife fit so well in my pockets. if you’ve ever worn skinny jeans (please guys, don’t admit to that), you know the pockets are so small they can barely even fit your own hands for warmth, nevermind a moderately-sized pocket knife. I’ve had folders that wouldn’t sit all the way in the front pocket, forcing me to relocate it to a back pocket, where I would invariably lose it when it slid out of the pocket and into the deep recesses of a couch somewhere (now that I think of it, that’s probably where my missing Benchmade is). So, for an EDC knife for the masses, Gerber gets the length just about perfect for me and my stupid girl pockets. 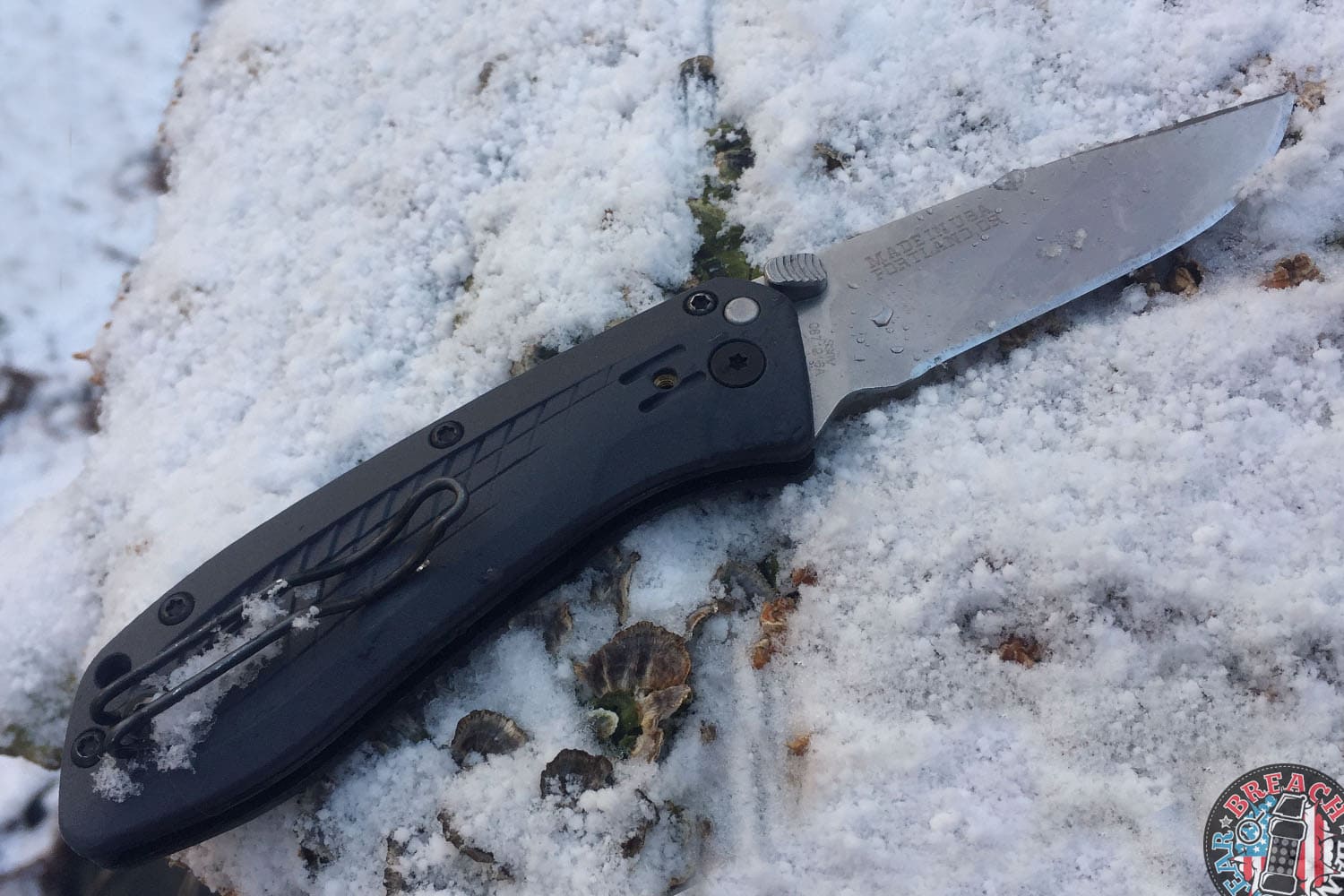 The heavy duty wire clip is advertised as scratch resistant, though I wasn’t going to test that one out on my personal vehicle. I had initial concerns that it would catch on random items and get twisted and bent out of shape, but I had no such issues. What I do really like about it though, is that the wire clip is more low profile in the pocket. It does not immediately catch the eye and scream “I have a knife, so I might have a gun, too.” “Where there’s one there’s two, and where there’s two there’s three” isn’t just a rule for the good guys, it’s a rule of prey selection, too (if I knew the EOD tech who coined that phrase, I would quote him by name so he would owe everyone beers, but alas). It certainly won’t stop a more attentive inspection, but a cursory scan likely won’t pick up on it like it would a solid silver metal clip. 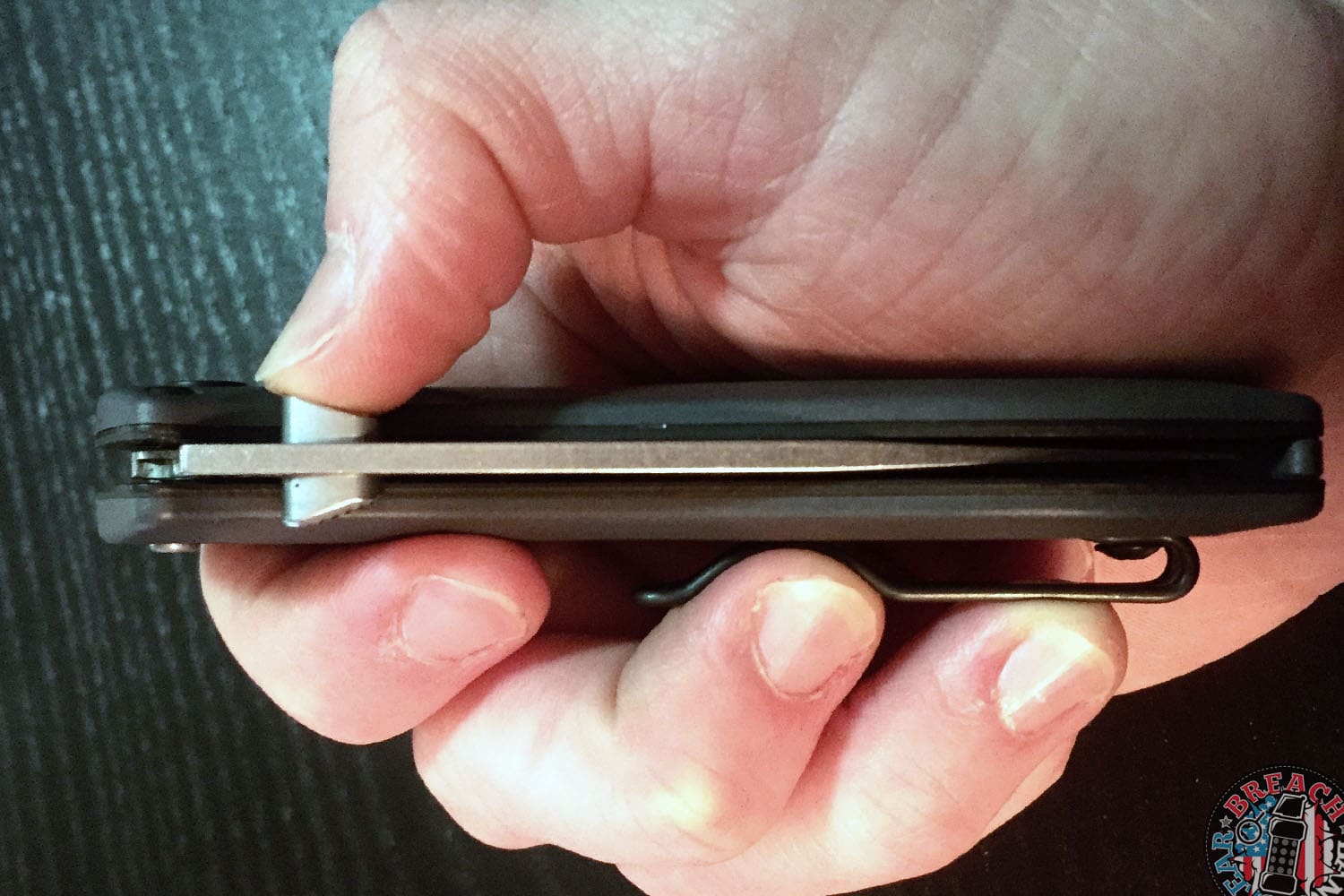 The dual angled, or as they call them, “ramped” thumb studs is actually an advertised feature for the US-ASSIST. It also seems to be a new feature for Gerber’s product line, which generally utilizes a round stud and the occasional Degtyaryov DP-28 pan magazine thumb plate. The thumb studs, which are placed on both sides of the blade, are angled at approximately 20 degrees and are serrated. Combined with the ball bearing system and internal spring, the angle and serrations allows the user to simply push down and up on the thumb stud to actuate a very efficient and smooth opening of the blade, courtesy of the Balls Of Stainless Steel.

Safety design and its location. 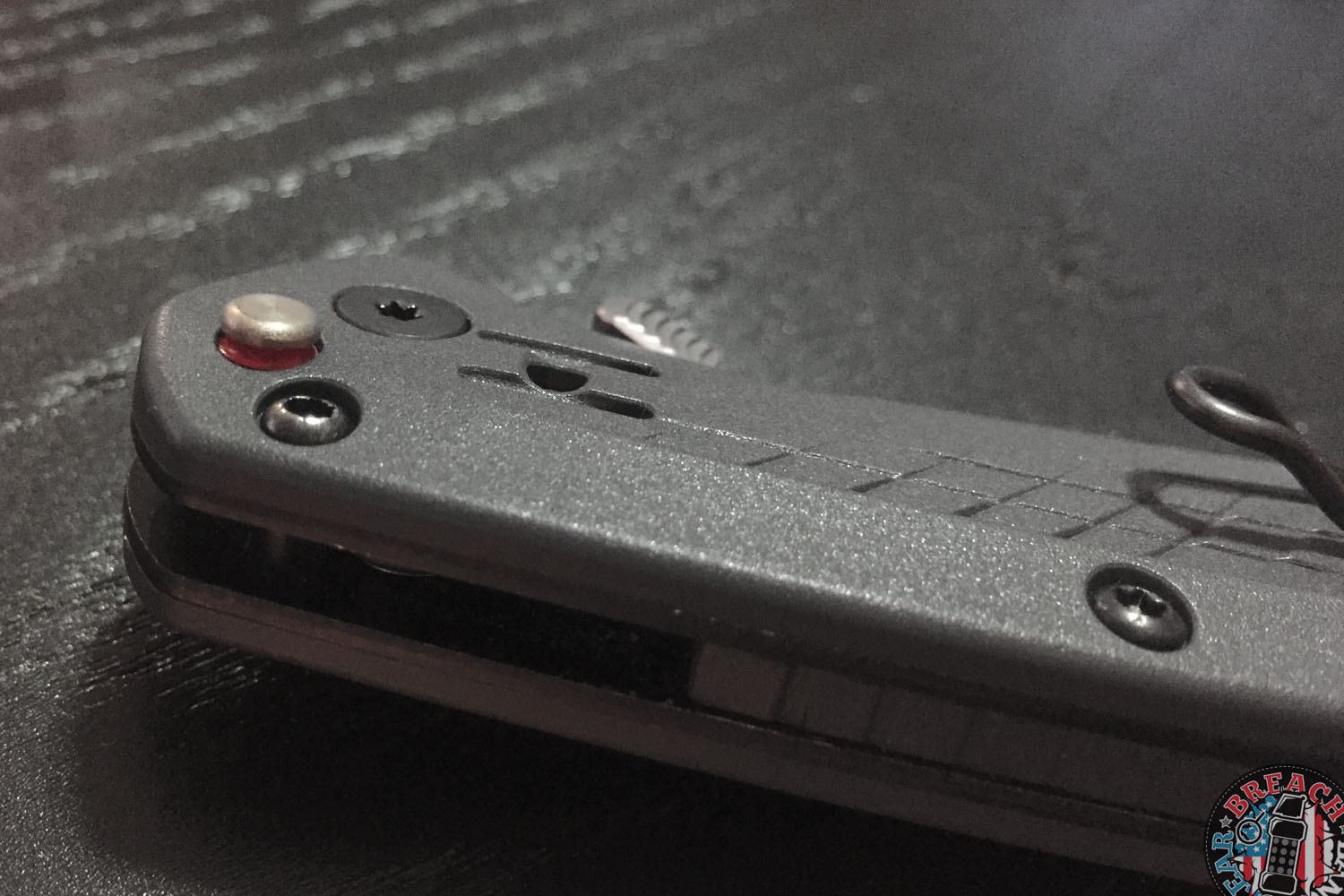 The plunge lock cross-bolt safety appealed to me right out of the box, but I’m not going to lie; it’s because it reminded of my childhood Daisy Red Ryder BB-gun, which can still be found in my closet and is frequently utilized as a spider death-dealer (I’m thinking about putting an RMR on it and naming it after myself). Despite the nostalgia, I feel that a slide safety placed half an inch lower on the handle would have been a more efficient design for opening and closing of the knife. When using the safety, I have to depress it at the top of the handle with my thumb, then move the thumb approximately an inch to the blade and then open the blade by engaging the thumb stud. Depressing the safety and engaging the thumb stud are two distinct movements that are also fairly far apart from each other. Conversely, I have to shift the knife in my hand to re-engage the safety with my index finger from the other side of the handle. Utilizing a slide safety would allow the depression of it to be the exact same movement as engaging the thumb stud (up) and drastically reducing the distance the thumb had to move between safety and thumb stud, ultimately making for more efficient handling, faster opening, and safer closing.

Poor ability to serve as an impromptu weapon. 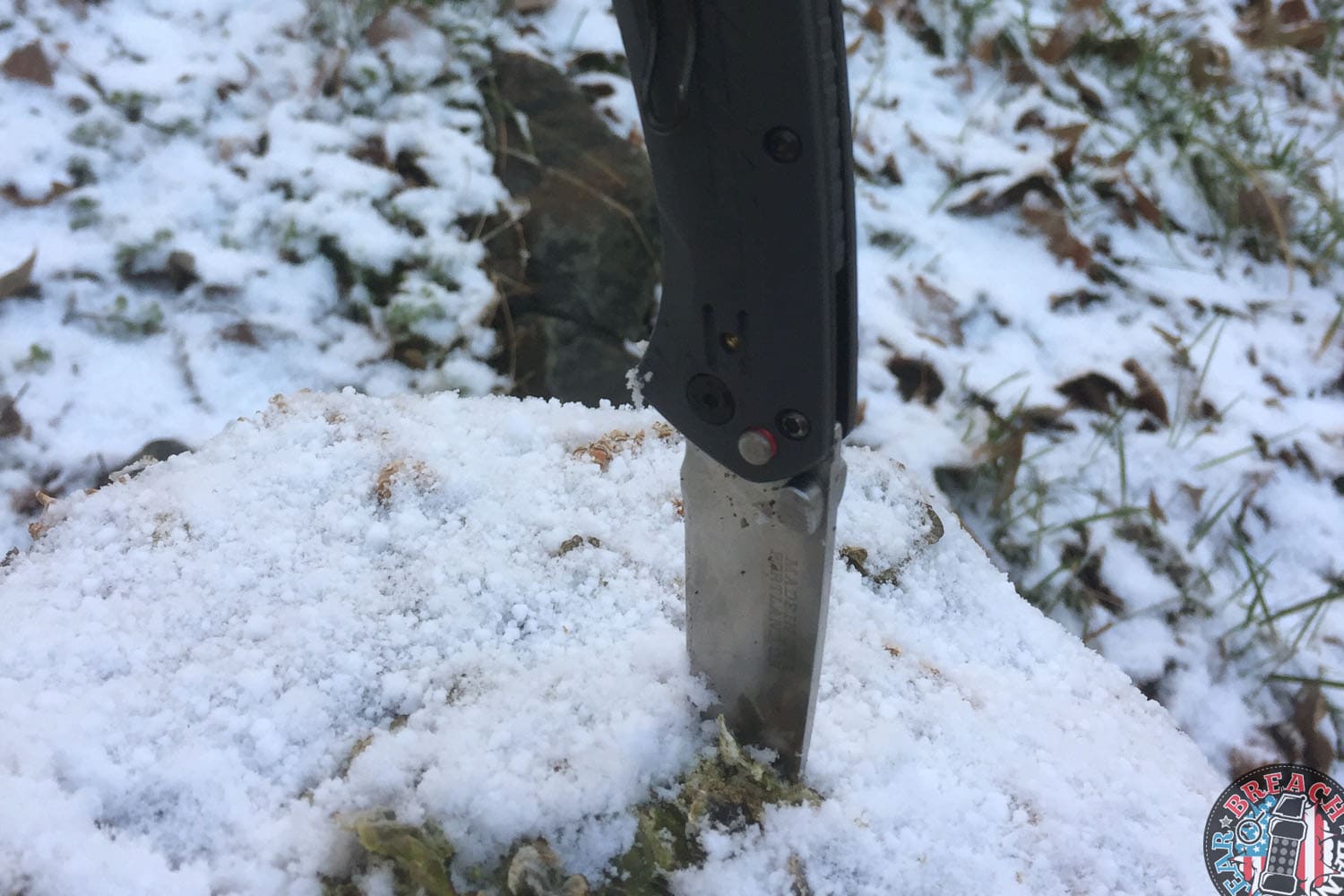 I know, that statement sounds absolutely ridiculous considering the US-ASSIST is a KNIFE. But stand by, let me explain. I carry a pocket knife as a tool for daily use. I carry a fixed blade as a weapon dedicated to the purpose of any required “pokey-stabby” therapy. That being said, I also believe in maximizing the application of tools: i.e. multipurpose. The pocket knife I carry should be able to be utilized as backup to my fixed blade. That means one of my requirements for an EDC folder is to be able to utilize it in an oh-shit situation when oh-shit-I-lost-my-fixed-blade. Unfortunately, this reasoning was not a consideration with the design of the US-ASSIST. The front quillon (the area of handle that your pointer finger indexes around) is not much more than a gentle slope that provides no resistance to your hand sliding down the blade and being sliced open if I should be required to stick it into a resistant object. 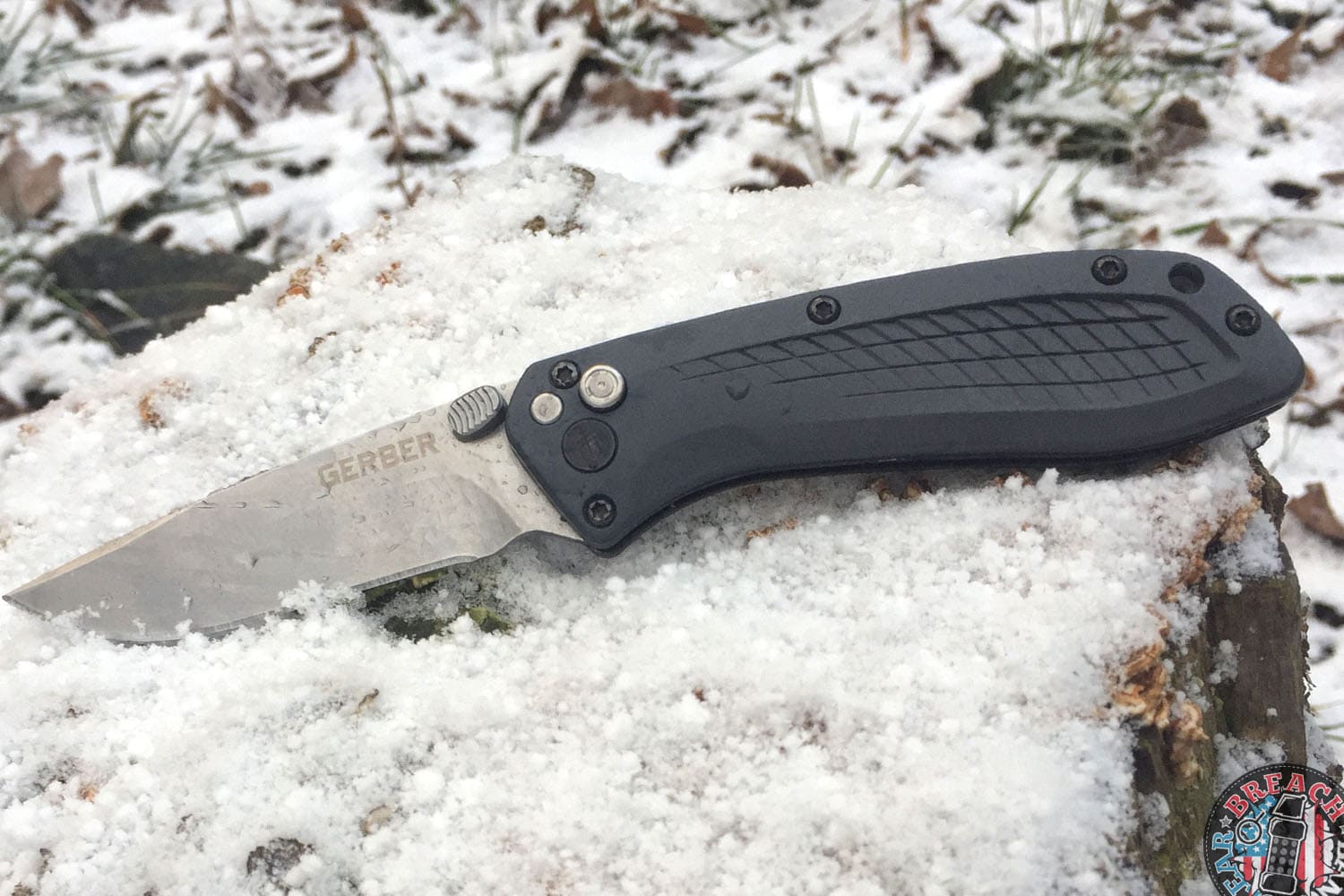 I was planning on doing a few informal durability tests by exposing the knife to a variety of elements. Sand was, unfortunately, the first, and you can imagine how well that went with a ball-bearing system and cross-bolt safety. Exposing your Balls Of Stainless Steel to the beach will result in grinding… and a possible arrest record if you misinterpret this statement. I rinsed as much sand out of the knife as possible, fully prepared to disassemble it, but alas, the screws, which look like hex screws upon a cursory inspection, turned out to be torx (star) screws. I don’t know if disassembly was disincentivized because of the increased complexity of the design could make reassembly difficult, but I do know that while almost everyone has a hex set in their range bag or in the garage, few have torx sets. This is not only a problem for me when it comes cleaning a knife that was dropped into unsavory elements, but with ball-bearings requiring maintenance and long term care it would be impossible without further purchases of tools.

At the end of the day, the US-ASSIST is being marketed as an everyday carry knife, and for the average urbanite who wants to carry a blade, if seems to fit that mold pretty well. I think the features I enjoyed about the knife will make it attractive to Gerber’s target market, and the issues that I have with the US-ASSIST are generally well outside their average customer’s concerns. That being said, at $119-$99 MSRP, I can’t see the US-ASSIST selling well in Walmart next to their $29 Tanto. My mother still buys one-ply toilet paper and I’m pretty sure my father still carries his truck-stop flashlight instead of the Surefire I gave him for Christmas two years ago. Trust me, I know cheap Walmart shoppers. That being said, I have no marketing experience whatsoever and the US-ASSIST has won several editor’s choice and outdoor retail show awards, so their customer base is there for them to do well, especially if they expand the B.O.S.S. Tech into other products and increase the ease of disassembly.

An avid anti-water activist, you can usually find Michelle C. Meyers drinking fancy coffee, though this transforms into bougie bourbon at 5 o’clock, in the comforts of the austere environments found only in Northern Virginia.  Her contemplation of the importance of the "self-rescuing princess" inspired her to become an officer in the United States Marine Corps, outshooting her counterparts, and training and traveling all over the Pacific theater courtesy of U.S. Navy boats. After leaving active duty, she took her propensity for crayon consumption and elite power point skills to a light infantry battalion in the Army National Guard. When she’s not doing more pull ups than you, grudgingly working on her run times, or accumulating excessive amounts of range and training class time, Michelle is beating the computer keyboard into submission working on projects she might not actually finish. She currently contributes to the Galaxy’s Edge Universe and her debut novel, Forget Nothing, was published as an Amazon Original and secured a spot on the Associated Press Weekly Audible Best Sellers list for three weeks in a row. MCM's current assignment prohibits us from using her full likeness. 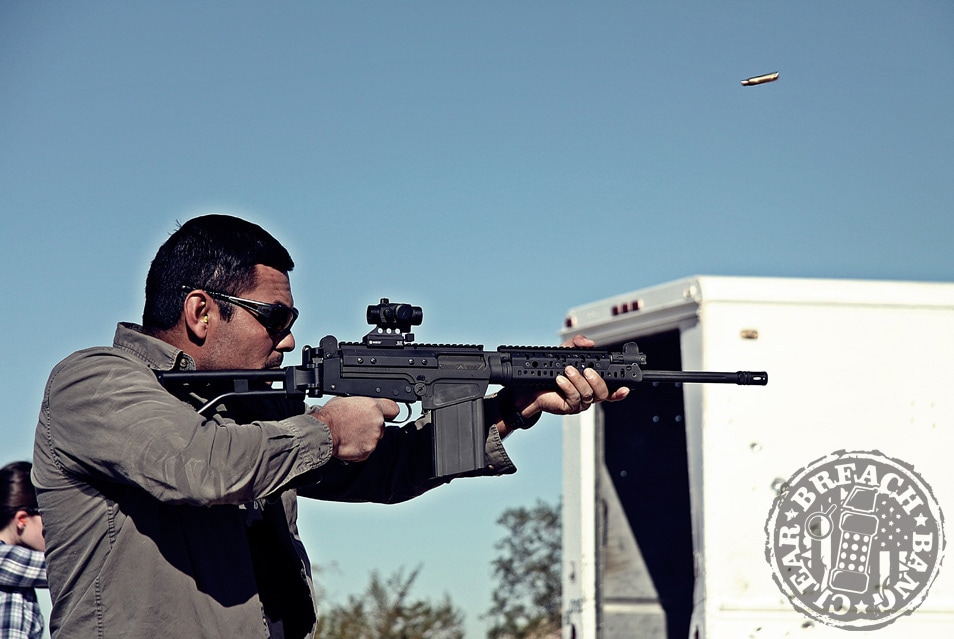 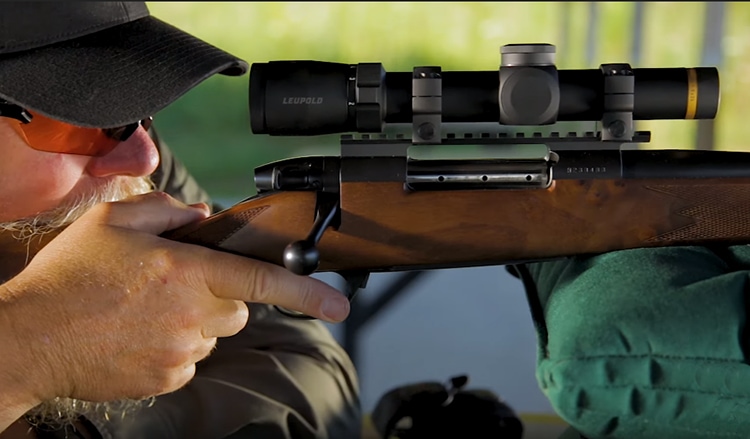 Contrast, Clarity, and Color – Kyle Lamb on the VX-5HD 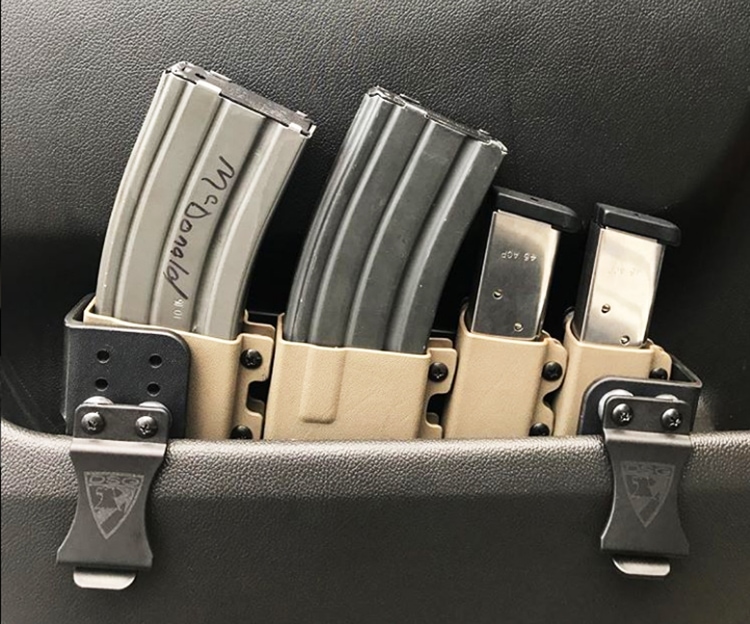